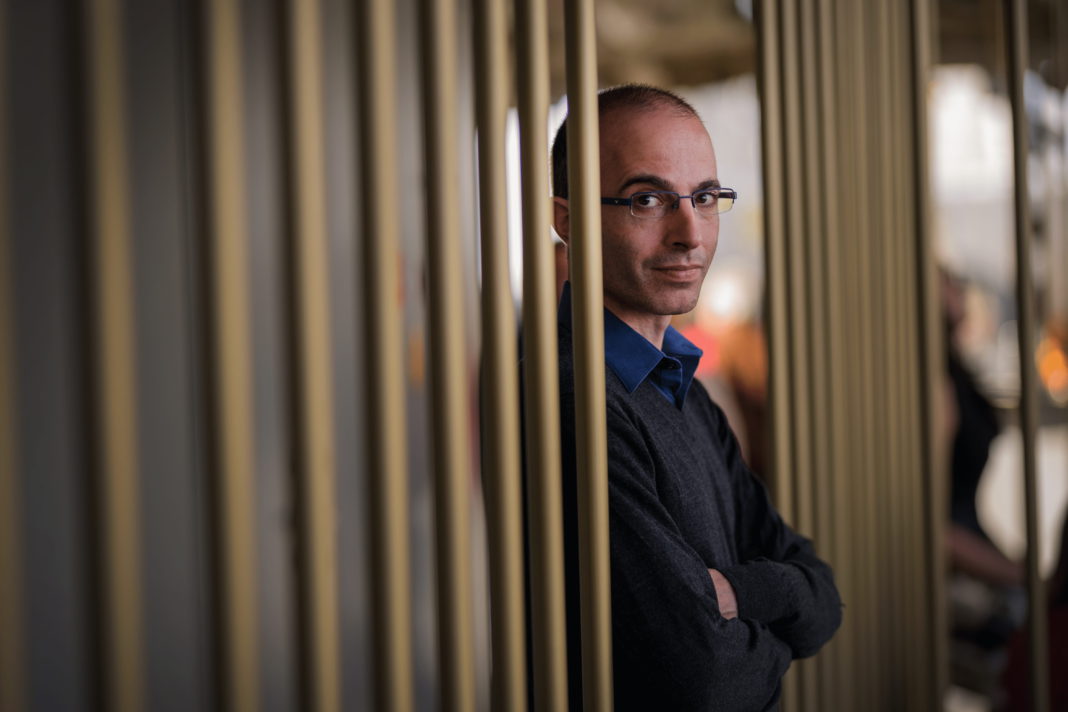 The influential academic explains why he considers modern animal agriculture a crime and how compassion for animals is his greatest motivator.

The rise of veganism has rightly been attributed by commentators to leading factors such as meat consumption’s effect on human health, the damage that animal agriculture causes to the environment, and people’s exposure to the horrors of slaughterhouses and factory farming.

But is there a bigger force at play? Are there major shifts within our culture and society that are helping drive the trend?

The most potent booster of veganism is the growing awareness of the immense suffering of billions of animals the world over. Activists such as Gary Yourofsky have opened the eyes of millions to animals’ hellish existence and the monstrous scale of factory farming. But there is a new kind of activism at play. A quietly spoken narrative that goes right to the heart of top influencers and policymakers — raising awareness on a global scale throughout convincingly written narrative, which touches and motivates presidents, prime ministers and key influencers.

Historian Yuval Harari is a prime exponent of this new-age activism. The Israeli author’s veganism-advocating assertions have been read by tens of millions worldwide, famously impacting Barak Obama, Benjamin Netanyahu, Bill Gates and Mark Zuckerberg, among others 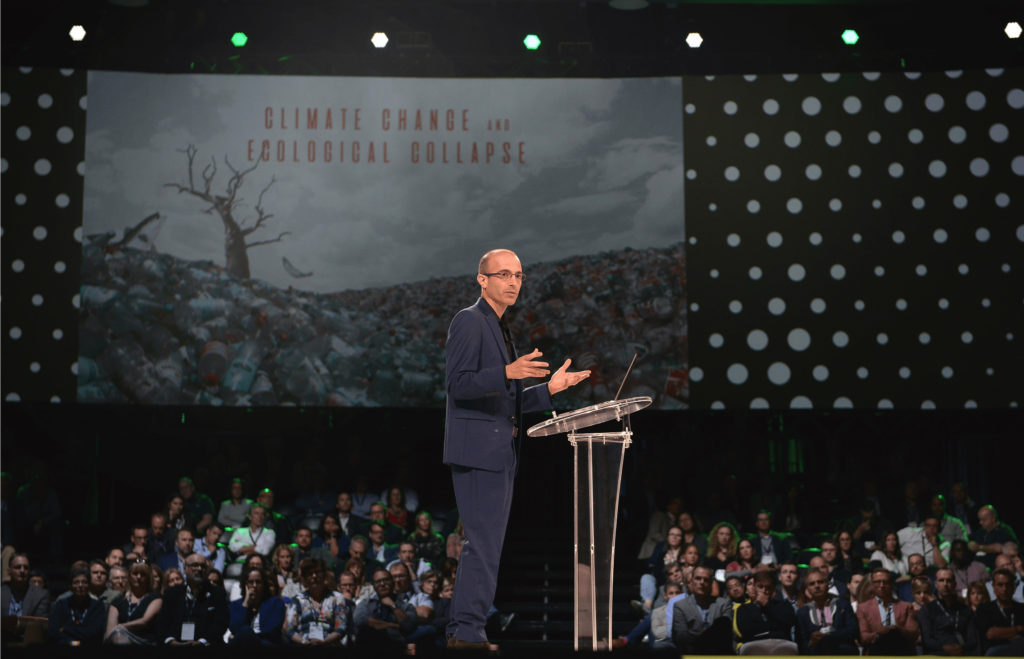 Harari’s compassion-led narrative in general, and his book, Sapiens: A Brief History of Humankind, in particular, have had a profound effect on these leaders. This effect has consequently played a considerable part in bringing animals’ plight to the forefront of people’s consciousness.

In 2013, Israeli prime minister Benjamin Netanyahu credited historian Yuval Harari with his newfound compassion for animals. He has been quoted as saying that Harari’s book has made him understand that “animals are more conscious than we thought”. Reading about the animals’ cruel reality and “their awareness of fellow animals’ suffering” has altered Netanyahu’s perception of humans’ relationship with the animal world.

He was motivated into action on a personal level, with his family considerably cutting down their meat consumption and revealing that his son, Yair, has been a vegetarian for several years.

Importantly, the prime minister went on to appoint a special animal welfare advisor, herself a vegan activist, and fully endorse the nationwide Meat Free Monday initiative.

Netanyahu is not the only world leader to be influenced by Harari. In 2016, US president Obama conveyed his deep impression of Harari’s book. Bill Gates and Jack Dorsey spoke openly about the title’s impact on them, while Facebook’s Zuckenberg made Sapiens the choice of his online book club. 38 million followers were invited to read what was described as “a big history narrative of human civilisation, from how we developed from hunter-gatherers to how we organise our society and economy today”.

The impact of these endorsements is beyond traditional activists’ wildest dreams. There is no telling how much of leaders’ policy has been directly affected by Harari’s narrative and to what extent they took his assertions to heart, but it stands to reason that a profound change in perception on any given topic would have an impact on an individual’s approach and, consequently, actions.

“I am not a strict vegan,” Harari tells me, “but I try to limit my involvement with industries that inflict unnecessary misery on animals. I am motivated mainly by compassion for the animals.”

Billions of domesticated animals such as cows and chickens are treated by the meat, dairy and egg industries “not as living beings that can feel pain and distress, but as machines”, as Harari explains. 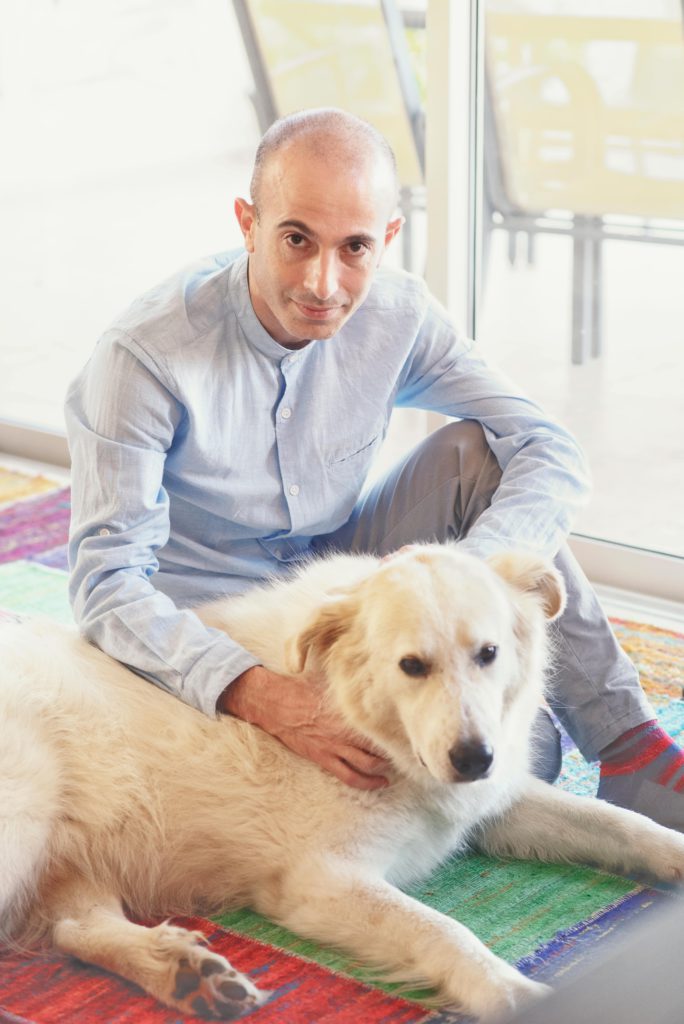 “Science tells us that cows and chickens have a complex world of emotions and sensations. They too can feel pain, fear, and anxiety, and also joy, curiosity and love,” he adds. “Yet, many industries completely disregard the feelings and suffering of animals.”

He gives the example of the dairy industry: “[It] is founded on breaking the bond of love between mother and offspring. A cow never produces milk unless it becomes pregnant and gives birth to a calf. The cow produces milk in order to feed her calf, but then humans take away the calf to be slaughtered for meat and milk the cow themselves.

“This results in much pain and agony for hundreds of millions of cows and calves each year. Judged by the sheer amount of misery it causes, modern animal farming is probably one of the worst crimes in history.”

But compassion is not the only element at play here. During a visit to a cultured-meat lab, Netanyahu commented on the positive impact mass-produced cultured meat can have on the environment. “Meat is a great contributor to pollution the world over,” he said, stressing the vast energy and resources required to produce one piece of meat, where at the lab, “it is produced straight up” without colossal penalties to the environment. Netanyahu’s words seem to echo Harari’s lament.

“Environmental considerations are also relevant,” the academic tells me. “To give just one example, it takes about 15,000 litres of freshwater to produce 1kg of beef, compared to 287 litres needed to produce 1kg of potatoes.”

Harari’s company Sapienship develops partnership-based initiatives based on the values featured in his books. It is interesting to note that Yuval Harari and his team recently visited Future Meat and Bio-Milk to take a close look at cultured food laboratories and developments.

Harari defines himself as “veganish” rather than vegan, because he does not think that it is feasible to cut “all ties with the harmful industries”, as the chains of cause-and-effect in the modern world are “just too complex”.

Also, as a historian, Harari is “wary of purist fantasies and the human obsession with food. People generally give far too much importance to what they eat and are prone to believe that they can make themselves pure just by following a particular diet. When it comes to food, humans have a tendency for extremism. You see it in all the religions.”

He adds: “Usually, a balanced attitude is more helpful than purist extremism.”

Harari concludes by asserting that “humans inflict unnecessary misery on animals in numerous ways besides eating meat and cheese. I try to be aware of all the ways in which we harm animals, instead of focusing only on food — my position regarding food is that any reduction in the consumption of animal products is a step in the right direction.

“Even a small step such as avoiding meat one day a week is beneficial. If someone decides to avoid eating meat on Monday, I would congratulate them on taking this step, instead of criticising them for continuing to eat meat on Tuesday.”

This mindset is carving a path within mainstream culture as Harari’s narrative is given direct access to the corridors of power. He participated in the World Economic Forum at Davos in 2018, where he stood on the main stage with Angela Merkel and Emmanuel Macron. He has also given talks at Google and Instagram.

This is all magnified immeasurably by our living in an increasingly feminised society with compassion as a core value. That means empathy is triggered instinctively within more people. This applies to the people’s urge to end animal suffering in general, but more specifically to factory farming’s systematic separation of mothers from little ones.

This observation does not claim that empathy and compassion are the reserves of women — nothing could be further from the truth — it is rather to state that a more feminist society responds more readily to veganism’s and Harari’s compassion-led narrative.

Hannah Gal
Hannah Gal is a London based journalist and filmmaker. Her credits include The Guardian, The Independent, The Huffington Post, The Knowledge, Al Araby, Photo District News, The British Journal of Photography and The Jerusalem Post among others. Hannah seeks great coffee and reason wherever she goes.
Previous articleVegan brand Beauty Kitchen the highest-rated B Corp in UK beauty industry
Next articleSave The Asian Elephants: fighting for new laws against elephant abuse