Animals First on the Second is ‘helping introverts find a voice’ “60 people are fasting in Budapest, Hungary. How many do you think are hungry?” jokes Izzy Jacobus, founder of Animals First on the Second (AFOTS). Giggling, he explains: “When you’re fasting, you get this silly euphoria and you laugh at the strangest things.” On the second day of every month, Jacobus is joined by thousands of individuals in a 24-hour fast, protesting the slaughter and exploitation of animals.

While the vegan activist originally took his idea for the challenge from 1983’s World Day for Farmed Animals, what makes AFOTS special is the mark people put on the back of their hand to symbolise their fast.

In 2017, Jacobus asked his New York City vegan Facebook group if anyone was willing to fast one day a month for animals. He received over 200 positive responses. Now entering its fourth year, AFOTS is too big for Jacobus to measure. He says some people have even gone as far as to get the mark tattooed on the back of their hands. 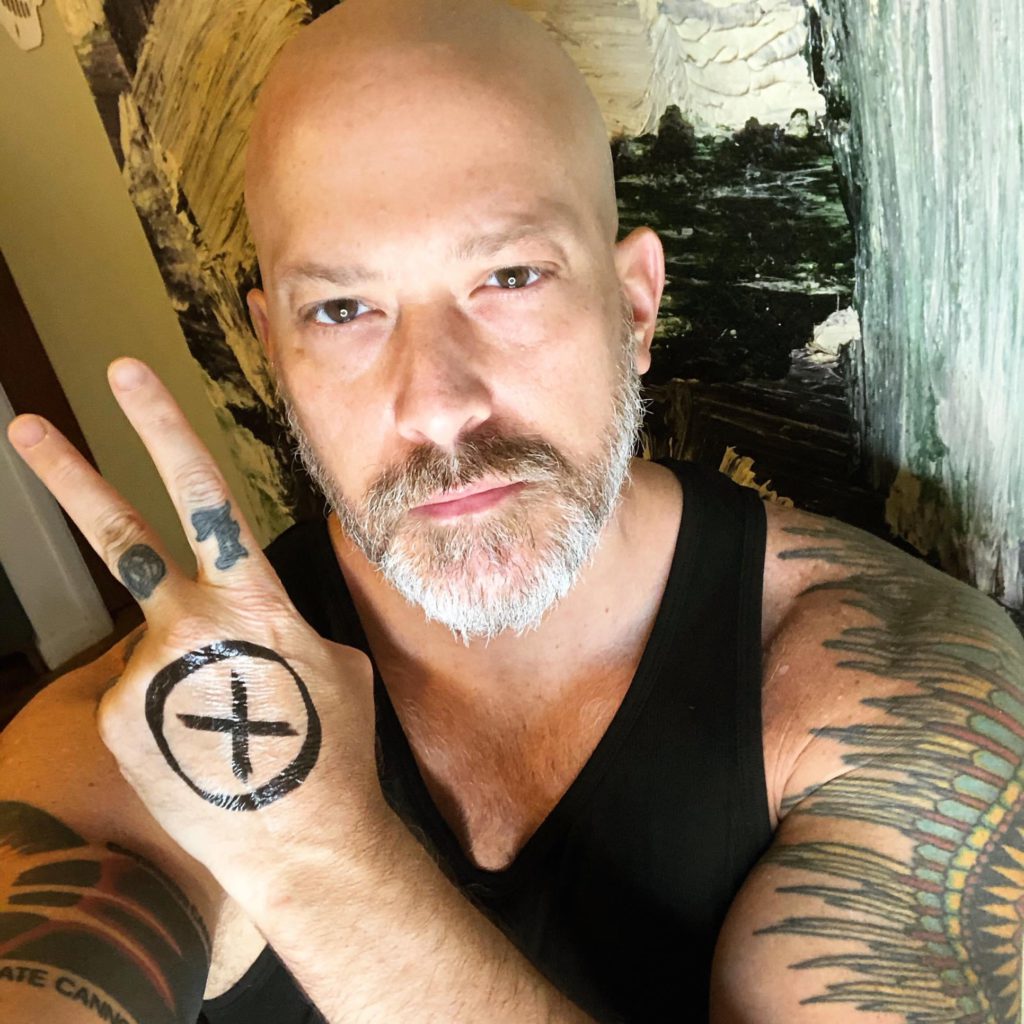 Hear from New Yorkers about living in the US’s most vegan-friendly city.

The vegan activist believes that the reason people become so invested in AFOTS is because of the way it gives you physical sensations, thus triggering your emotional body. By getting a mark on your hand too, people you bump into — your neighbour, local shopkeeper, fellow runner — will start asking questions, initiating a conversation about veganism.

The activist is passionate about animal welfare and emphasises the fact that AFOTS is more than just a fast. To ensure anyone can participate, Jacobus created a sign — a checkmark — for those who have been diagnosed with clinical disorders. Fasting for 24 hours is not always easy, and while he has grown accustomed to it, he sometimes still gets light-headed, and encourages people to participate in the most healthy way they can.

Jacobus wasn’t always aware of the consequences of animal product consumption. Almost seven years ago, after a succession of injuries and surgeries, he found himself disabled and bed-ridden. “I’d let myself degrade further and further working from home,” he recalls.

But after getting inspired to watch some documentaries — including Forks Over Knives and Vegucated — Jacobus started to see a way of digging himself out of this hole. Within 24 hours on Netflix and YouTube, he’d watched over 15 documentaries. The transition was immediate. He felt he could no longer be complicit in what was destroying his body, the environment and sentient beings. “If we don’t need to do this, then why are we doing it for fun?” he asked himself.

With a change in lifestyle came a switch in career. But shifting jobs was already quite familiar to Jacobus, who had been a rapper until the age of 30, then went into interior design and antiques, and ended up studying at the Fashion Institute of Technology, specialising in accessory design.

After turning vegan, he discovered Joshua Katcher, founder of award-winning vegan footwear brand Brave Gentleman. Katcher had started his company in the back of a grocery store in Jacobus’s neighbourhood and this inspired him to start working for him, which allowed him to continue being creative but connect with the vegan world too. 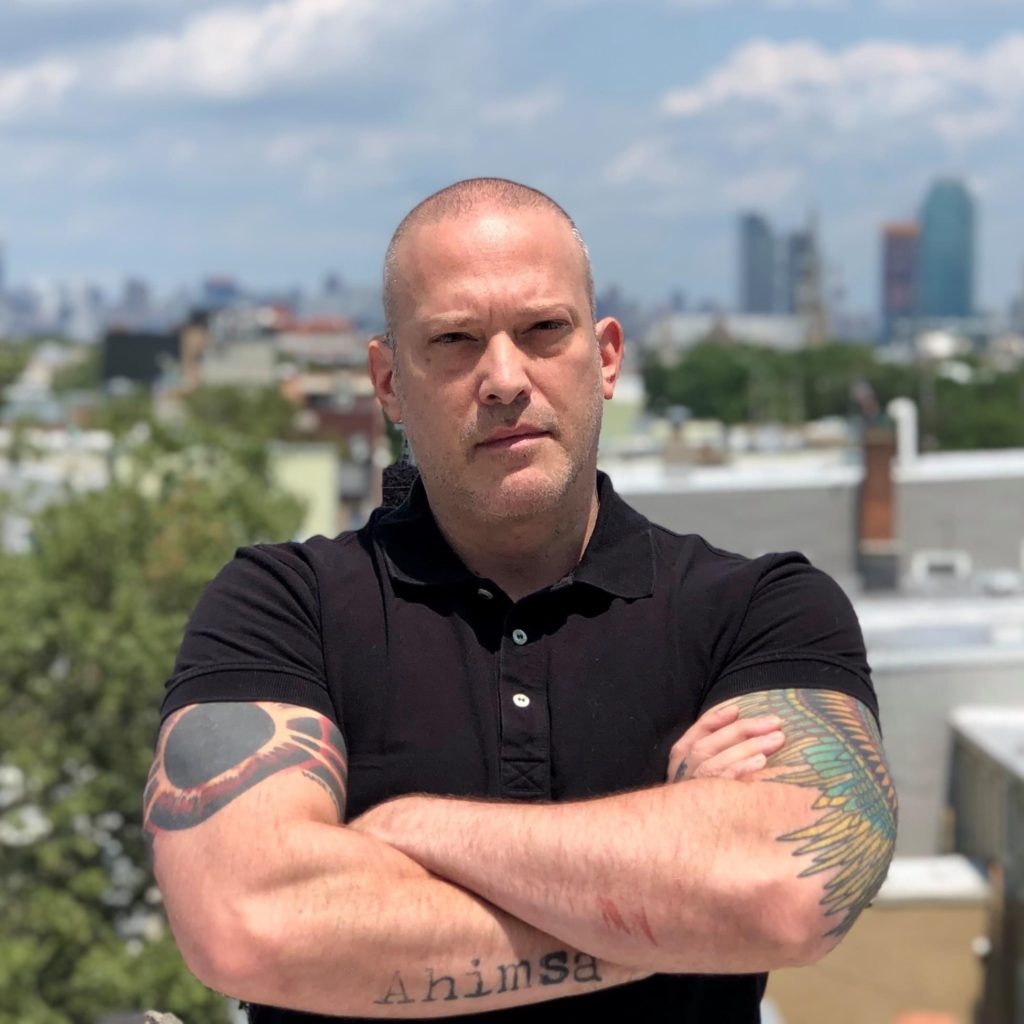 Jacobus says where he lives, an area in northern Brooklyn, is perhaps the most vegan neighbourhood in the world. Home to a vegan grocery store, two plant-based cheese shops, a vegan tattoo parlour, restaurants, doughnuts, pizzerias, it’s no surprise it also saw the opening of the first vegan medical clinic too. Around the same time of its opening, Jacobus was looking into nutrition and in 2017, he started working as the clinic’s inhouse nutrition counsellor. When patients came in to get treatment, they’d get a free talk with Jacobus, who would talk to them about nutrition and lifestyle intervention rather than medical solutions.

However, after being approached by patients with cancer and heart conditions, the activist began to feel under qualified. Today, he operates his own nutrition coaching service from his own living room in Brooklyn. His service has grown a lot and he is awaiting the launch of an online platform too.

The future is still uncertain for the 49-year-old. Having changed his career three times already, Jacobus says there’s no stopping him from doing it again. But he’s sure that whatever happens, it will either concern AFOTS or his newfound passion for vegan fitness and nutrition.

A post shared by Animals First on the Second (@fastagainstslaughter)

The coach believes AFOTS has overcome its period of doubt, when Internet trolls would attack the movement with comments like “This is narcissistic bullshit” or “Y’all aren’t doing nothing”. The mark is now making productive conversations, and for that one day every month, he hopes people will begin to only talk about animals first. Once that day’s over, he hopes people will go write, be active and take part in AV cubes.

“The best thing about AFOTS is it’s helping introverts find their voice,” he says. “If you put a mark on your hand, people will always ask questions.”

Olivia Rafferty
Olivia is the Assistant Editor of The Vegan Review. An aspiring Middle Eastern correspondent currently studying journalism at City, University of London, she is passionate about the planet, she believes veganism is the first step to solving the complexities of climate change.
Previous articleGlobal Forest Summit sees calls for reduced animal consumption to fight deforestation
Next articleHorse milk is trending. Here’s why it shouldn’t be