Apostle Coffee: The carbon-neutral journey to your morning cup 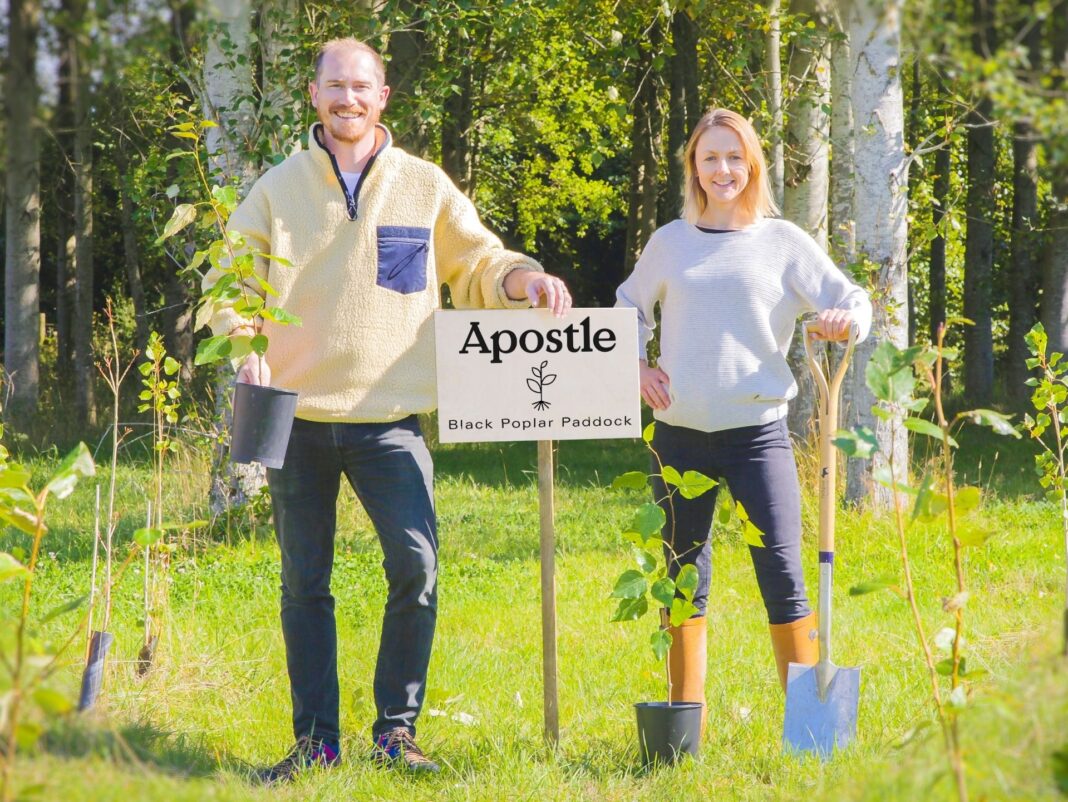 Jon Stanford explains how his Shropshire-based company Apostle Coffee became one of the UK’s only carbon-neutral coffee businesses.

Surrounded by cardboard boxes all across the floor and shelves, Jon Stanford is sitting in what looks like a wooden shed, by a medieval footpath called Apostle’s Way, which leads to a church. “An apostle is a champion of something. They gather around an ideal and are passionate about something. That could be Jesus,” he tells me, and then smiles. “For us, it’s good coffee.”

That’s where the coffee company gets its name from. Apostle Coffee is a small, family-run roastery based in Shropshire. And it’s amongst the UK’s only carbon-neutral coffee businesses.

“Our business practices are completely carbon-negative, so anything we’re meant to send out of here is carbon-neutral,” explains Stanford, Apostle’s co-founder. Alongside the trees Apostle plants to offset its footprint, it offers regular subscribers a chance to have their personalised, individual tree planted in its Shropshire forest. Every tree absorbs a ton of carbon, which is about 10% of an individual’s annual emissions.

How do Stanford and his team account for one-off purchases? “Every year we have our carbon emissions calculated, and we always plant more trees than we need to, to offset that. And anything we sell within that year will have been attributed to our overall tree-planting scheme for the year.”

Currently, Apostle exclusively plants Black Poplar trees, as they’re one of the UK’s most endangered species. “But that’s not to say that we won’t—” Stanford pauses, “branch out to other plants and varieties.” He laughs, and continues: “The world is our oyster when it comes to nice trees. No such thing as a bad tree.”

He established Apostle in 2016, moving full-time to Shropshire from London last summer, having just had a child. While at Hackney’s The Roasting Shed, he and his wife started talking to the staff, who offered to provide them with some training in roasting. Eventually, they bought the shop’s old 1980s Probat roaster to bring back to Shropshire, and began roasting coffee.

It was important to them as a business to focus on sustainability. To Stanford, a business should reflect the things the founders are passionate about or they expect in a company. “Increasingly, companies are reducing their plastic, they are even doing tree-planting schemes on their own,” he notes. “You see companies giving to One Tree Planted to offset their own emissions.” That’s why he decided that all of Apostle’s packaging would be compostable. 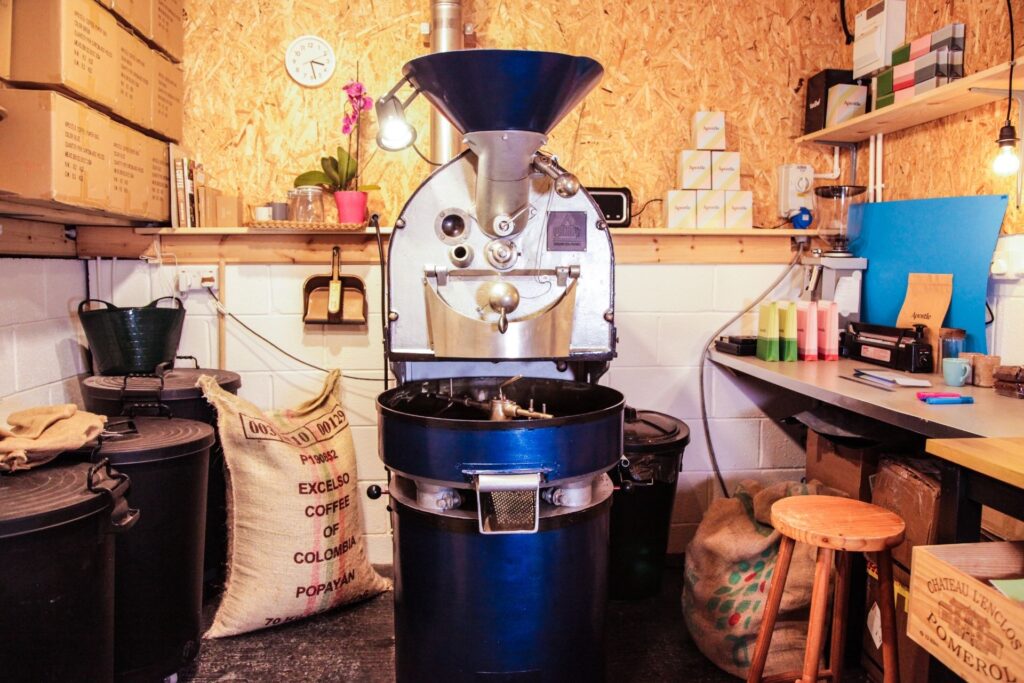 The coffee comes in a box made from cardboard (“the garden loves card, chews it up, insulates the compost, gets it all moist and whatnot”). The stickers on it are biodegradable. I ask Stanford about the plastic-like packaging inside. “No plastic! Don’t say the P-word!” he says, before explaining it’s a plant-derived cellulose bag.

Coffee has, for the longest time, had circular valves on its packaging, which don’t let any gases in and only allow carbon dioxide to pass out, which is a byproduct of coffee roasting. The idea is that the one-way system keeps coffee fresh. Stanford calls it an old-school mentality, “for coffee that’s sitting on a supermarket shelf far too long”.

“You order our coffee today, we roasted it yesterday, and it’s going to be with you in two days,” he explains. “There’s no need for us to do that. It’s going to be okay. These cellulose things hold in the freshness just as well.”

With coffee, one of the biggest detriments to climate change is transportation. Arabica coffee is grown in a small ‘belt’ between the tropics and transported around the world after being sourced. Stanford notes that Apostle doesn’t use air freight, instead relying on ships, which is the most sustainable transportation method after wind power. For its green beans, the company goes through a wholesale supplier called Falcon, which specialises in small lots of coffee from trusted farms pioneering in sustainable practices.

“I’ve been speaking to a Brazillian farm, and they’re becoming instrumental in reducing the environmental costs of their transportation,” he says. “Rather than using lots of lorries to freight it, they’re moving to locomotives and rail.” He adds how farms are updating their equipment to be more fuel-efficient and less carbon-heavy. 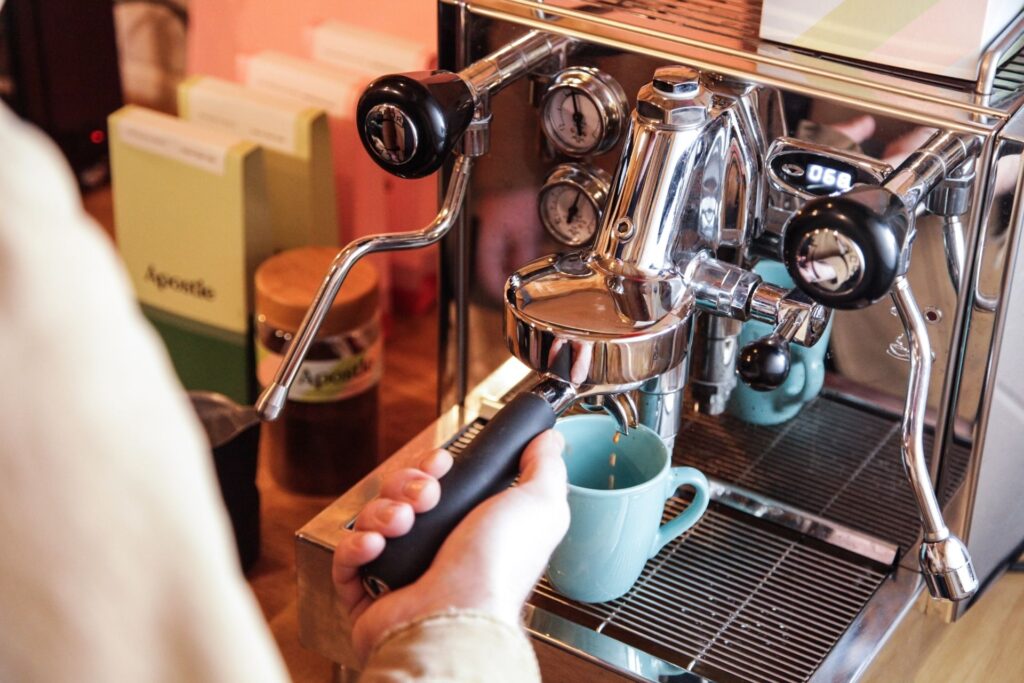 While he estimates that shipping containers will be more reliant on wind power in the next ten years, Stanford admits that it’s impossible for transportation to be a carbon-free process. For Apostle, it’s about “sustainably roasted coffee”.

“We’re conscious about where we’re sourcing our beans from. When we’re actually in practice, we’re off the mains power grids here. So we have a wind turbine when it’s windy and solar when it’s sunny. And our roasting operates on natural gas, which is a very low-impact emission source of fuel. Our packaging is zero to landfill, so you can just put this in your compost and it will decompose away.”

But being environmentally-friendly also drives up raw material costs. Biodegradable stickers and compostable bags are pricier than their regular counterparts. Stanford hopes that the industry will catch up with that and prices reduce, but says Apostle’s profit margins are modest. “We’re not here to make millions of pounds. We’re trying to create something that’s giving people all those positives without breaking the bank, essentially,” he tells me. “We’re not here to be the next Starbucks.”

At the moment, Apostle is planting 200 trees a year, which is enough to offset its emissions, as the business is still new and relatively small. But as it grows, the company hopes to expand into compostable coffee pods and take the wholesale route into cafes.

It was already in a few retail stores locally, but that dropped away as the pandemic forced shops to close down. Stanford says it’s been challenging, but like many businesses, Apostle’s online sales went up: “We’re in the infancy of our journey. So we haven’t felt the effects perhaps as much as companies who’ve been established for a longer time.”

But a larger, even longer-term issue — one at the heart of everything Apostle does — surrounds the coffee industry: climate change. Stanford recalls a video he saw about global warming and how it affects coffee production. While the coffee belt expands outside the tropics as it gets hotter, the land suitable for growing coffee is shrinking. That forces farmers to move to higher altitudes, where it’s cooler, leaving the farms at lower altitudes more susceptible to insects damaging the plants.

Stanford refers to the pandemic to provide perspective. “We’re reassessing how much of things we have. Perhaps we shouldn’t be drinking three cups of Starbucks a day,” he suggests, “and we should just be focussing on quality and reducing our consumption a little. I am optimistically cautious that consumer attitudes will switch to a more sustainable system.”

Anay Mridul
Anay is journalism graduate from City, University of London, he was a barista for three years, and never shuts up about coffee. He's passionate about coffee, plant-based milk, cooking, eating, veganism, writing about all that, profiling people, and the Oxford Comma. Originally from India, he went vegan in 2020, after attempting (and failing) Veganuary. He believes being environmentally conscious is a basic responsibility, and veganism is the best thing you can do to battle climate change. He gets lost at Whole Foods sometimes.
Previous articleWorld Vegan Month: Being plant-based in Kenya
Next articleDo you remember when veganism was fun?