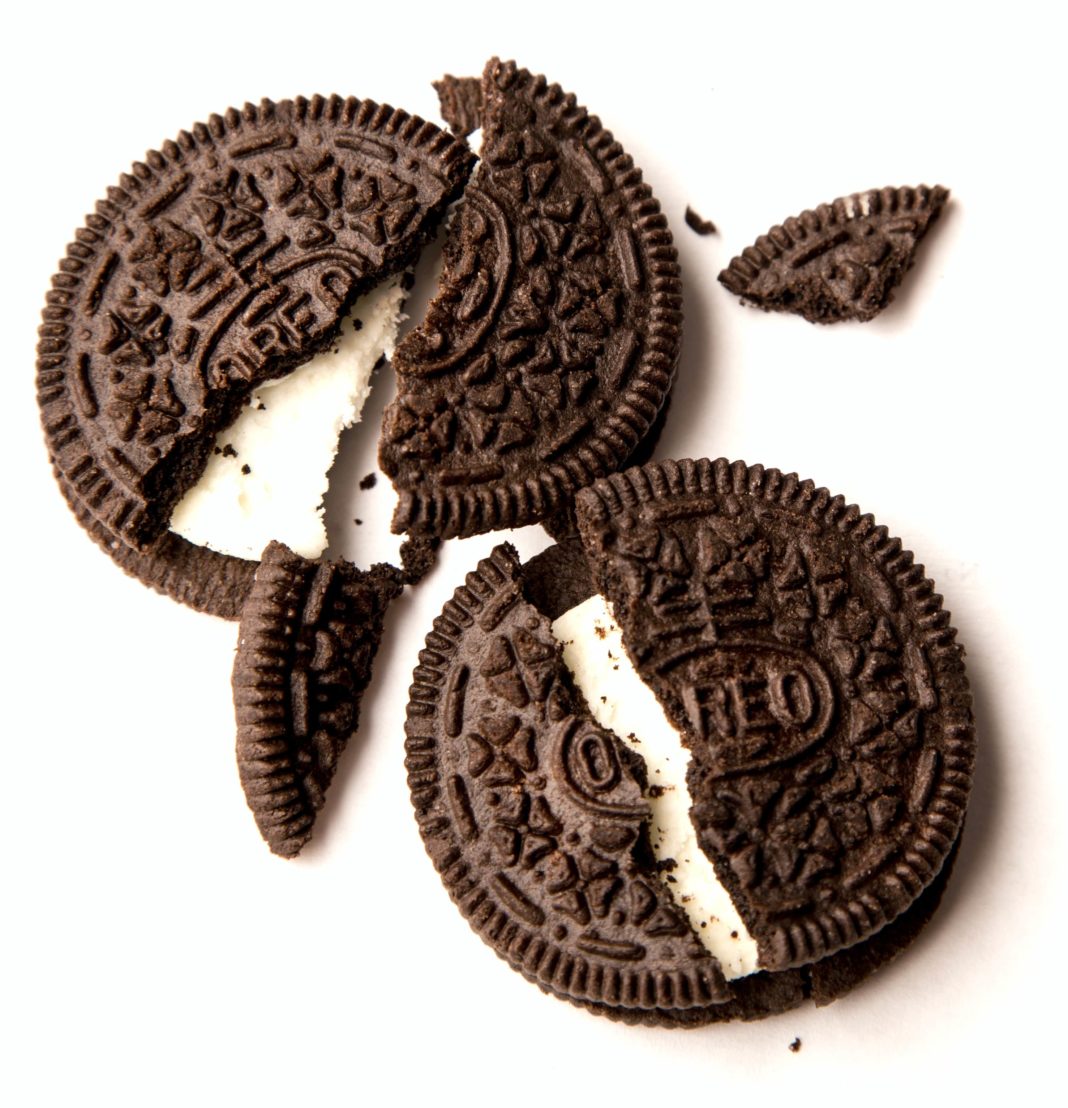 Oreos are vegan, right? It’s not as simple as you might think…

The vegan controversy behind Oreos is not as black and white as the popular chocolate cookie and creme sandwich treat itself.

The ingredients section on their famous blue packaging may not mention any animal-derived products but it is also not certified vegan. So, what is the truth behind the creamy filling of this cookie?

The ingredients you find in Oreos are safe for anyone following plant-based diets as the traditional cookie label reads:

No animal products, But, are Oreos vegan?

The official Oreo website maintains that Oreos are not vegan. This is because Oreos have milk as a cross-contact and therefore they are not suitable for vegans.

One of the FAQs on the Oreo website queries whether Oreos are vegan. The website says (in 2020).

What does cross-contact mean?

The relates to the conditions where the cookies are produced. Cross-contact occurs when a factory makes products that do contain milk and these may come into close contact with Oreos. When this happens, there is a possibility that the chocolate cookies will contain trace amounts of dairy.

Cross-contact is slightly different from cross-contamination because cooking the cookies (how do you eat your Oreos?) will not remove the traces of milk.

So, can vegans eat Oreos?

Simply because they might come into contact with dairy isn’t enough for us to say that vegans should avoid Oreo products.

Many products free from animal-derived ingredients that we buy in supermarkets also display a ‘may contain’ label, due to factory conditions. Some vegans may decide not to consume these products for that reason, but for many, it is not reasonable or practical to do so. As The Vegan Society states in its definition of veganism:

“Veganism is a way of living which seeks to exclude, as far as is possible and practicable, all forms of exploitation of, and cruelty to, animals for food, clothing or any other purpose.”

Many products can’t be truly classed as vegan due to manufacturing methods, but many of us would agree that it’s still okay to eat them. This applies to Oreo cookies as well!

So, Are UK Oreos Vegan? 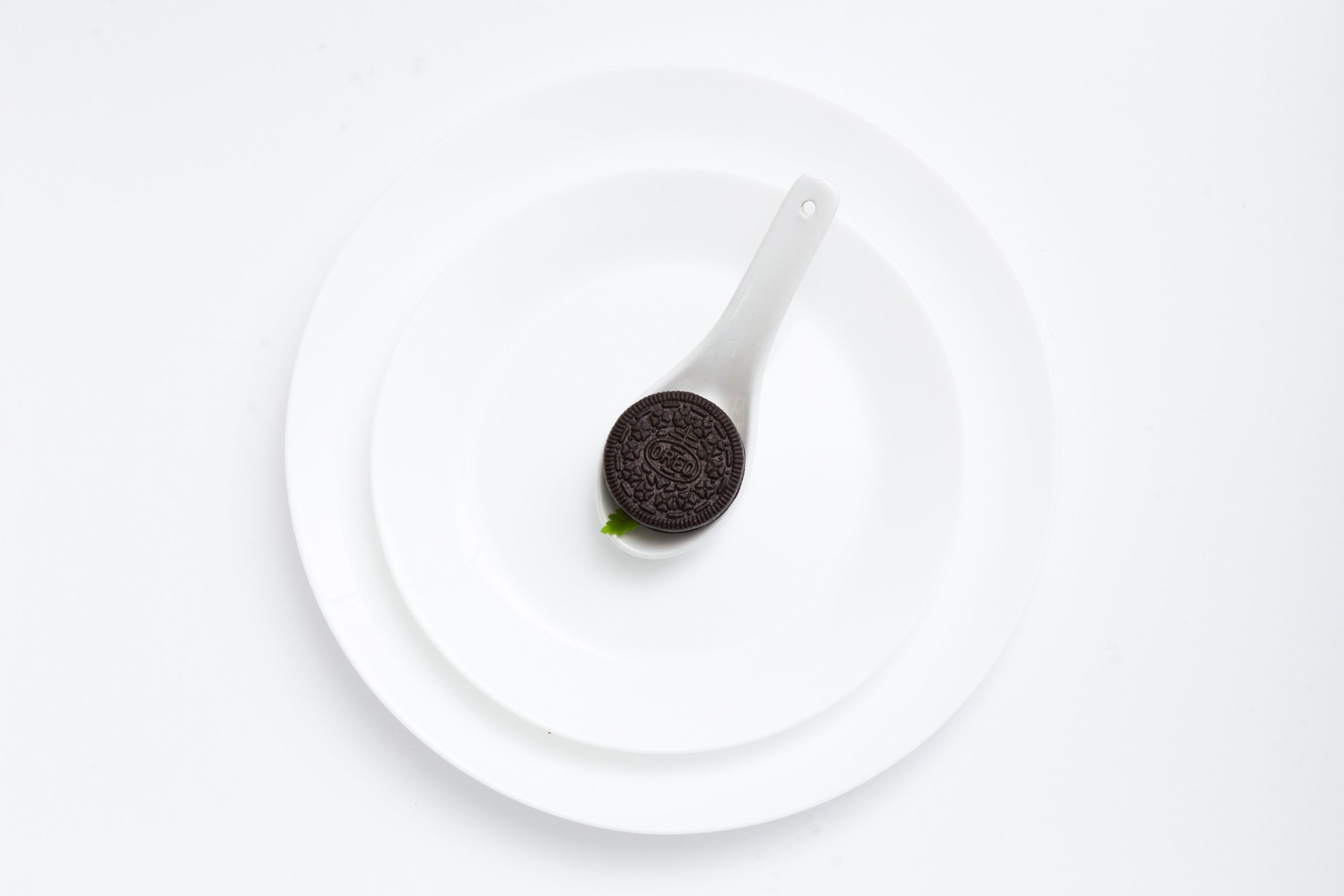 Oreo cookies in the UK (2020) are produced by Mondelez International.

The Mondelez companies also produce many non-vegan snacks and chocolates such as Cadbury, Toblerone, TUC and many others. This means that Mondelez factories also use milk and eggs, and traces of these might come to contact with the equipment that produces Oreos.

Mondelez warns that there is a possibility that Oreos contain milk traces. Even though the possible traces found in the sandwich cookies are not comparable to drinking a glass of dairy milk, the risk is still there.

Love chocolate? Check out allplants’ review of the best vegan chocolate brands in the UK.

And, are American Oreos vegan?

Even the American division of Mondelez International, the National Biscuit Company (also called Nabisco) does not want to advertise the cookies as vegan.

However, Peta, one of the biggest animal rights advocates, classifies Oreos as an “accidentally-vegan” snack.

It’s true, #Oreos are #vegan! Did you know all these other snacks are too? 👉 https://t.co/hjq3suxZUK #NationalOreoDay pic.twitter.com/Z0Yz01ZX3q

As you can see, unlike the Oreo cookies themselves, the answer is not always black and white.

Similar to the Original Oreo Cookies, Golden Oreos do not contain animal-derived ingredients. Nevertheless, they are made in the same factory as products that contain dairy, so there is still a risk of cross-contact.

What about the other Oreo cookies, are they plant-based?

The selection of Oreos that directly does not contain any animal-derived ingredients in the UK includes Classic Oreo Pack, Golden Oreos, Double Stuff, Mini Tub, and Chocolate Cream. The only definitely non-vegan flavour is peanut butter as it contains milk.

Have you seen Lotus Biscuits’ new range of vegan snacks? 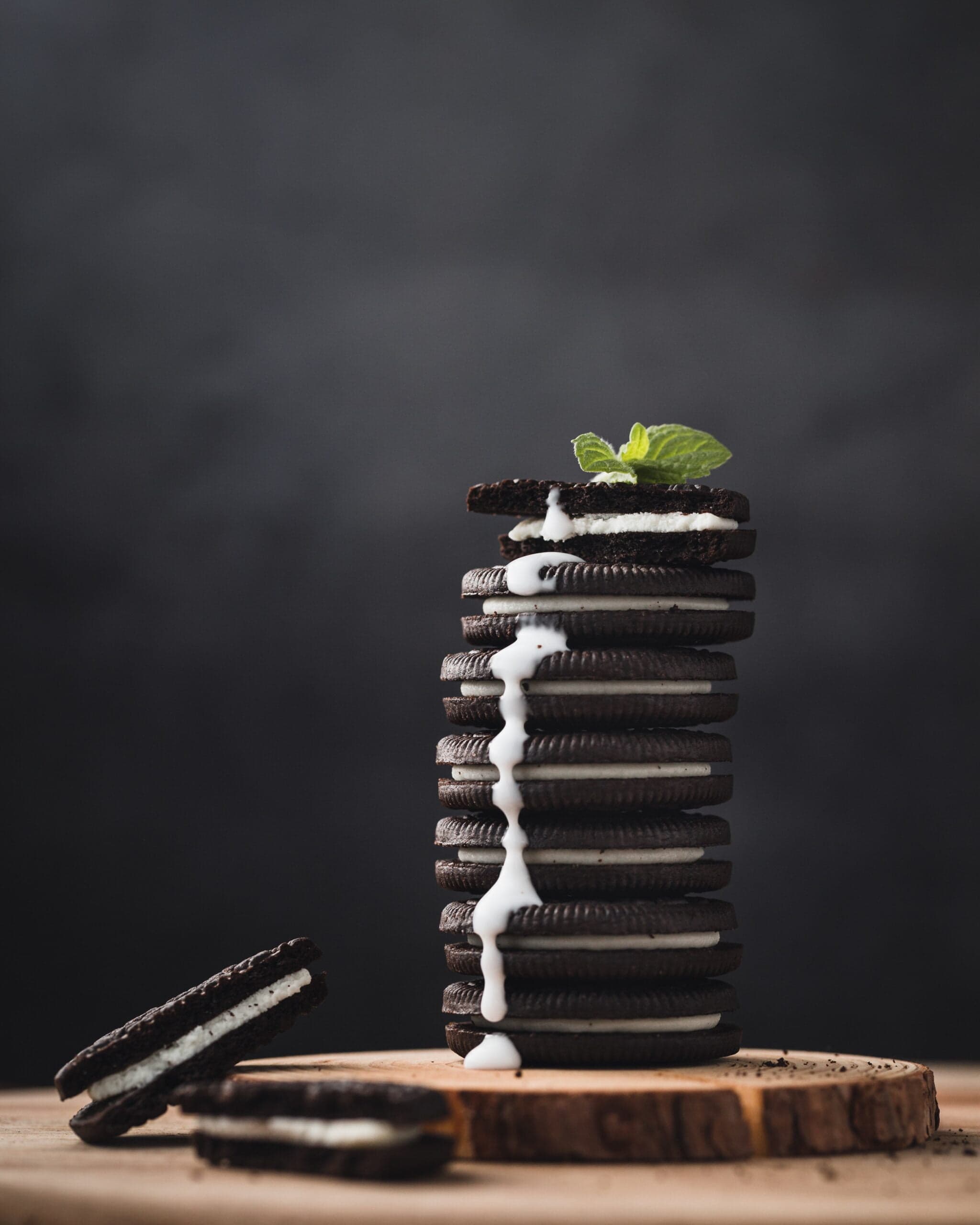 The issue goes way back, as Oreos were not always made with plant-based ingredients. The vanilla creme-filled cookies were once made with lard. Lard is a white fat deriving from fatty parts of a pig. Health concerns connected with lard urged Nabisco to replace the lard in the creme filling with vegetable oil in the 1990s.

Another controversial ingredient that still remains in these cookies is palm oil, which many vegans try to avoid. Palm oil is plant-based but the majority is produced unsustainably. Large green parts of rainforests in developing countries are clearing in order to make space for palm oil plantations. This also impacts some animals as they are losing their natural habitat, particularly orangutans.

The plight of orangutans was highlighted by UK supermarket Iceland, in an unaired 2018 Christmas advert addressing the deforestation issue that palm oil production contributes to.

According to Greenpeace: “the palm oil industry is responsible for destroying Indonesia’s forests on an epic scale. This is accelerating climate change, and also forces people from their traditional lands and threatens orangutans with extinction.”

Do Oreos use sustainable palm oil?

Mondelez International claims it “is committing to sourcing palm oil sustainably and eradicating deforestation and human rights violations in the palm oil supply”.

To our passionate fans: We hear you. We are committed to achieving 100% sustainability & transparency in palm oil. Today, 100% of @MDLZ’s palm oil is sustainably sourced via #RSPO and we’re going further. Read our action plan for industry-wide change: https://t.co/zN5jMC4QjW pic.twitter.com/36f2IJXknZ

However, there are concerns that sustainable palm oil is no better for the environment or for animals. Greenpeace state that “‘Certified sustainable’ palm oil is a con” and “about as much use as a chocolate teapot” – damning words indeed.

A report covered by UK newspaper The Independent found that “Palm-oil forests certified as sustainable are being destroyed faster than non-certified land, experts have found, in a study they say blows the lid on any claims that the oil can be destruction-free.”

For more information on palm oil, check out our article: Is Palm Oil Bad? The Consequences on Wildlife and the Environment.

If you’re not completely happy with eating cross-contact Oreos that have been made with palm oil, or if you simply want to support more vegan businesses, then here are our favourite plant-based Oreo cookie alternatives:

Cookie & Biscuit are a UK-based, female-owned, and black-owned vegan business that offers boxes of cookies and brownies. She regularly changes the flavours, which include the delectable Cardamon Snickadoodle and Classic Chocolate Chunk!

A gluten-free company, Udi’s make an Oreo alternative that is also vegan!

How to make your own giant vegan Oreos that are free from palm oil:

The decision of whether to snack on these popular sandwich cookies seems to remain with the individual, taking into account their beliefs.

“My stance on Oreos is not about the traces of milk but the issue with the palm oil,” says Rachel Nurse, a vegan from Cardiff.

“I consider meat traces and gelatine a big issue but not so much egg and milk,’’ says Rachel. 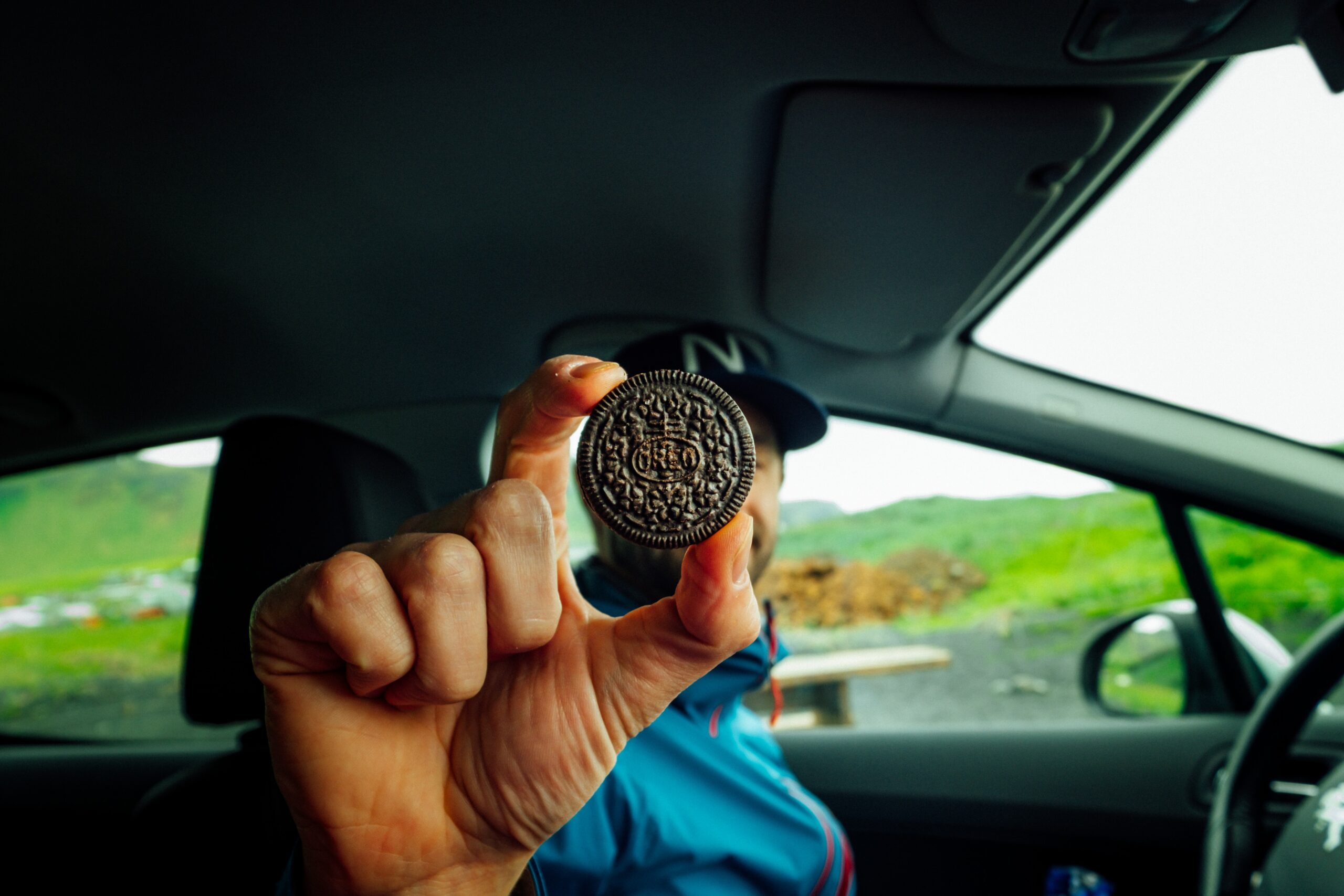 Isabel Passos from London who also follows a vegan diet did not even know about the whole Oreo controversy. “It is not a dealbreaker for me because I do not have a severe allergy,” she says.

Viva!, a vegan campaigning charity says: “They [accidentally-vegan products] make it much easier to not only find vegan snacks and treats but to enjoy them with family and friends.”

“So, although it is your choice whether to eat products with ‘may contain’ warnings, we would encourage new and transitioning vegans not to be too hard on themselves, as it is unlikely that the product is non-vegan.”

Next up: what if we told you that not all bananas are vegan?

Disclaimer: For the purposes of this article, original and golden Oreos are the only ones listed as vegan-appropriate. Limited edition and special flavours are regularly released and The Vegan Review cannot guarantee they are suitable for those following a vegan diet. Please always check ingredient lists carefully.

Diana Buntajova
Diana is always looking for the environmental aspect of every story. She is interested in health and lifestyle, hoping to point to issues that are often overseen. Diana has explored topics including B-12 deficiency in the vegan diet, fears about exotic skin farms sparking another pandemic, and the Oreo controversy. Currently studying Journalism at City University of London, she enjoys everything to do with visuals especially photography. Creative and detail-oriented in both her visual and written work. On a mission to find the best vegan cheese and can't resist beyond meat burgers.
Previous articleHow to grow a healthy vegan-friendly garden
Next articleBeyond Meat prices to fall (as cost of meat increases)