The best egg substitute for vegan cookies is no substitute 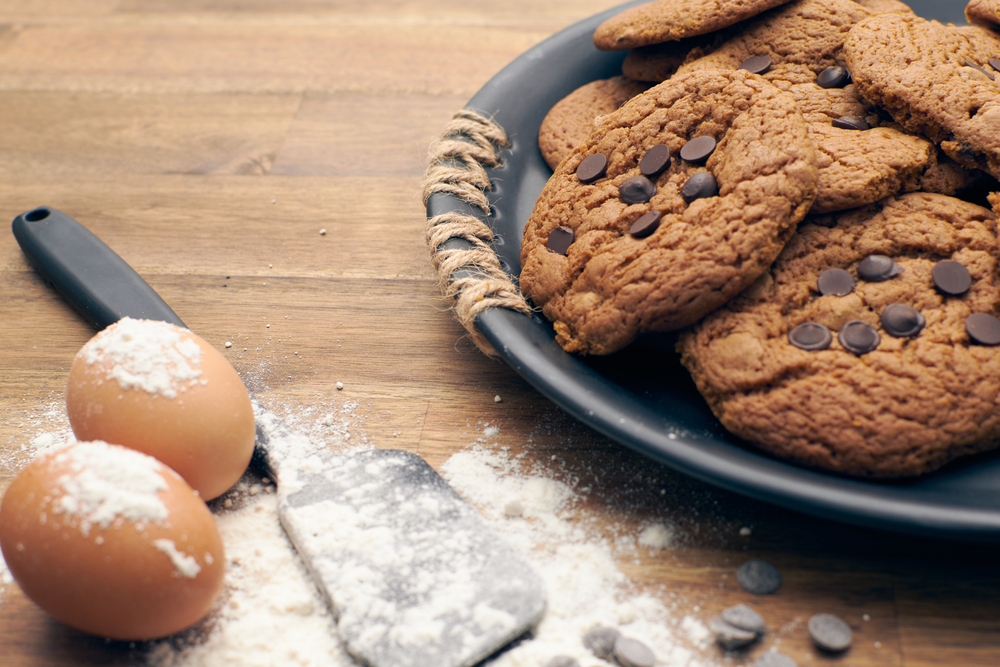 We’ve seen countless egg substitutes in vegan cookies, but some leading recipes say the best way to replace eggs is to not replace them at all.

Flax seeds, chia seeds, applesauce, aquafaba, banana. These are among the most commonly cited ingredients in food blogs and recipe books attempting to replace an egg to make a vegan cookie.

I should know. I grew up in a lacto-vegetarian household — we consumed dairy, but eggs weren’t allowed (at least at home, anyway). That, combined with my never-ending curiosity about cooking and baking, meant I spent my childhood finding different egg substitutes for the baked goods my mom and I would make.

There was once an 11-page list of egg substitutes and how to use them — about the most thorough research I’ve ever done. There was also a time when I went on a full-on baking spree and made 72 cookies in six different flavours. All this is to say, after searching rigorously for the perfect vegan chocolate chip cookie in the my 18 months as a vegan so far, I forgot that I’d subconsciously discovered the best way to replace eggs in cookies: omit them altogether, and don’t look back.

It’s something I’ve realised is backed by food science. Some of the most popular, well-tested recipes for vegan chocolate chip cookies employ the same idea. It’s best summarised by America’s Test Kitchen: “We removed the egg and found that we simply didn’t need a substitute for it.” There goes our monthlong test to find the best vegan egg substitute for cookies.

Eggs act as a binder, add moisture, and provide a lift to cookies. Yet, removing them is the best way to make a vegan cookie.

That’s because they’re mostly fat and water, and the trick is to compensate with other sources of, you know, fat and water. And while you might think of these ingredients as replacements, they’re actually not — since they’ll most likely be part of your cookie dough anyway.

The best way to make up for the fat in eggs is to use some kind of oil or vegan butter. Vegan butter is basically an emulsion of different oils, and while some versions can be browned, it doesn’t always smell or taste the best. Coconut oil is the most common vegan substitute for butter — and for all the moaning about it tasting like coconut, refined coconut oil doesn’t. And while it may seem hard to find, any coconut oil that isn’t labelled “virgin” or “unrefined” is, well, refined. If you want to be sure, find one that is suitable for frying, which will mean it has a high smoke point, is refined, and does not taste like coconuts.

As for the water in eggs, you just use water. Or plant-based milk, which has a high water content too.

Tasty, a fan favourite, has a vegan chocolate chip cookie recipe that uses coconut oil and non-dairy milk, which act as the moisturising agents and bind everything together. When it comes to the leavening, the recipe uses baking soda, which reacts with the acidic brown sugar to help the cookie rise.

Another much-cited recipe is by the New York City bakery, Ovenly, which labels it as “secretly vegan”. As part of its Genius recipes, Food52 broke down why the recipe worked and what made it the bakery’s most popular cookie. It’s where the fat and water concept I touched on comes from — but instead of coconut oil, the recipe calls for canola oil.

Ovenly founders Agatha Kulaga and Erin Patinkin argue that skipping the eggs actually makes it a simpler process, as there is no creaming involved. While resting the dough is the holy grail of cookie-making, you don’t need more than 12 hours for this version, because the lack of egg means there’s nothing that slows down the hydration.

This recipe uses both baking powder and soda. Baking powder is basically a mixture of baking soda and a dry acid, so it’s ready to go once it’s hydrated. Since there’s moisture involved from both the water and oil, it acts as an effective leavener. And it works in tandem with the baking soda, which, like Tasty’s recipe, reacts with the brown sugar.

And then there’s America’s Test Kitchen. When adapting its classic cookie recipe to a vegan version, the cooks simply removed the eggs. Instead, it relies on both baking soda and powder, as well as coconut oil, marking an intersection of the Tasty and Ovenly recipes. The unique bit of the recipe is in the addition of almond butter, which give the cookies the much-sought-after buttery, toffee-like notes.

Anne Wolf, the test cook who developed the recipe, explained that the test kitchen baked 11 popular recipes and tried multiple egg substitutes. “We tried every egg substitute we could think of,” she told the America’s Test Kitchen website. “We actually expected ground flax seed to be crucial here, since it’s great at binding and creating a chewy, moist quality. But with the almond butter and brown sugar contributing richness and moisture, we were able to get that same quality without the fuss of supplements or substitutes.”

Additionally, nut butters are considered efficient substitutes for eggs, with the fat content and moisture making up for the lack of eggs in cookies. While the America’s Test Kitchen recipe doesn’t address those properties of the nut butter — instead focusing on the flavour aspect — it’s an added bonus.

It’s kind of crazy — vegan baking is so consumed by finding the perfect replacement for eggs, that almost religious pursuit overlooks food science. Sometimes, the trouble really isn’t worth it, and less really is more. Keep it simple, silly.

Anay Mridul
Anay is the managing editor of The Vegan Review. A journalism graduate from City, University of London, he was a barista for three years, and never shuts up about coffee. He's passionate about coffee, plant-based milk, cooking, eating, veganism, writing about all that, profiling people, and the Oxford Comma. Originally from India, he went vegan in 2020, after attempting (and failing) Veganuary. He believes being environmentally conscious is a basic responsibility, and veganism is the best thing you can do to battle climate change. He gets lost at Whole Foods sometimes.
Previous articleOatly loses trademark case against Glebe Farm’s PureOaty, won’t appeal decision
Next articleOp-ed: How a new bill could introduce plant-based meals in US public schools