Big Top without animals: how circuses are championing animal rights 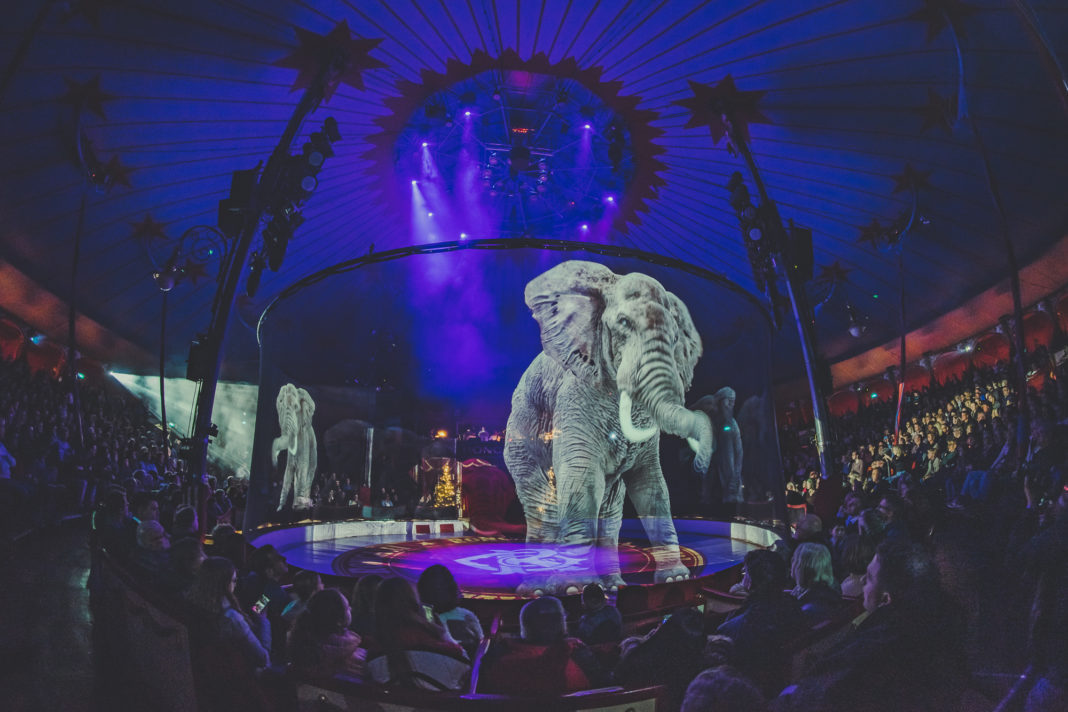 From new technology to contemporary art-forms, here’s how the circus industry adapted as the world condemns animal abuse in the industry.

The circus. A magical, wonderous experience with flamboyant decor involving acrobats, clowns, musicians, trapeze artists, jugglers and trained animals. But that last one is where the ethical side to the circus is questioned. Do people still want to see animals in the circus? “Do these people still exist?” That was a response that I received whilst investigating this concept.

For centuries, animals have been the most fascinating part of the circus. Audiences are amazed by their tricks, but many animals suffer as they are in captivity in a stressful and unethical environment, surrounded by humans rather than others like their own. The atmosphere that the animals are caged in can cause stress an often circus animals are exploited.

According to the RSPCA, the use of animals is banned under the Wild Animals in Circuses Act 2019. Despite this, in the US, many circuses still use animals in their shows, such as Carden Circus International. On its website, it states that it is “110% committed to the exceptional care and ethical treatment of all of our animals.”

It adds: “We strongly oppose any form of cruelty or mistreatment to animal large and small.” Despite this, there are questions about how the animals are treated behind closed doors. Does keeping them in small cages in close proximity align with their morals of zero mistreatment?

Read our story on the dark side to circuses and the animal entertainment industry.

The debate of using animals, although still existing in most circuses, is coming to a halt. With more discussion and awareness of animal cruelty, the circus industry is rapidly changing. To avoid conflicts, many other circuses around the world are adapting to contemporary circuses or use technology to showcase animals in a unique and morally acceptable approach.

Germany-based Circus Roncalli went viral for its use of holographic animals instead of employing live animals, showcasing a multidimensional experience and enhancing the traditional concept of the circus.

But how did this all come to be? In 2016, Roncalli founder and director Bernhard Paul had the desire to showcase animals in the circus in a “poetic and modern way”. “I saw the Superbowl from America and Justin Timberlake was singing with Prince, but he had passed away,” recalls Pall. “I was so impressed with the holographic technique, so I wanted to have it.”

In 2017 the project developed as Paul hired Markus Strobl as his chief digital officer and together, they premiered the holographs in Circus Roncalli’s tour show in Cologne, Germany, which at the time was called Storyteller.

One argument was that the essence of the live animals was missing. Can it truly be replaced by technology? For Roncalli, due to the mesmerising tech, the audience is captivated by the new adaptation of the live animals and was in awe of its decision to defy the traditionality of the circus.

“The audience was directly touched and impressed by Roncalli’s new way of a classical circus,” he says. Modifying to modern technology, Paul has been able to capture the essence of the circus in an unfamiliar way seeming ever so real yet also magical. Roncalli, for over 30 years, has included the majority of traditional circus animals such as elephants, lions and horses. Additionally, from the beginning, Roncalli would mainly focus on clowns, acrobats and poetic acts.

“Times changed. Opinions also changed,” says Paul. “Transporting animals on congested and full highways is an anachronism and not necessary.” Recognising the ethical side, Paul understood that it was morally correct to stop using horses in his shows. He also realised that using technology could give the circus more opportunities. “There is no space anymore for animals and not-really-green fields,” he adds. A growing concern in the industry, the use of technology can lead to touring in more cities in Europe due to the enticing and unconventional concept.

However, defying the conventions of a traditional concept can also come with disappointment. Animals play a huge role, but Paul received 95% positive feedback when the holographic launched.

He says: “As a circus or circus-director, you have to listen to the audience but also to your heart and trust your own gut. I was sure and focused to show the audience something new.”

He adds: “I wanted to have a high quality.” Paul invested €500,000 to make his dream come true, attracting media attention as the fascinating concept of holographs went viral. 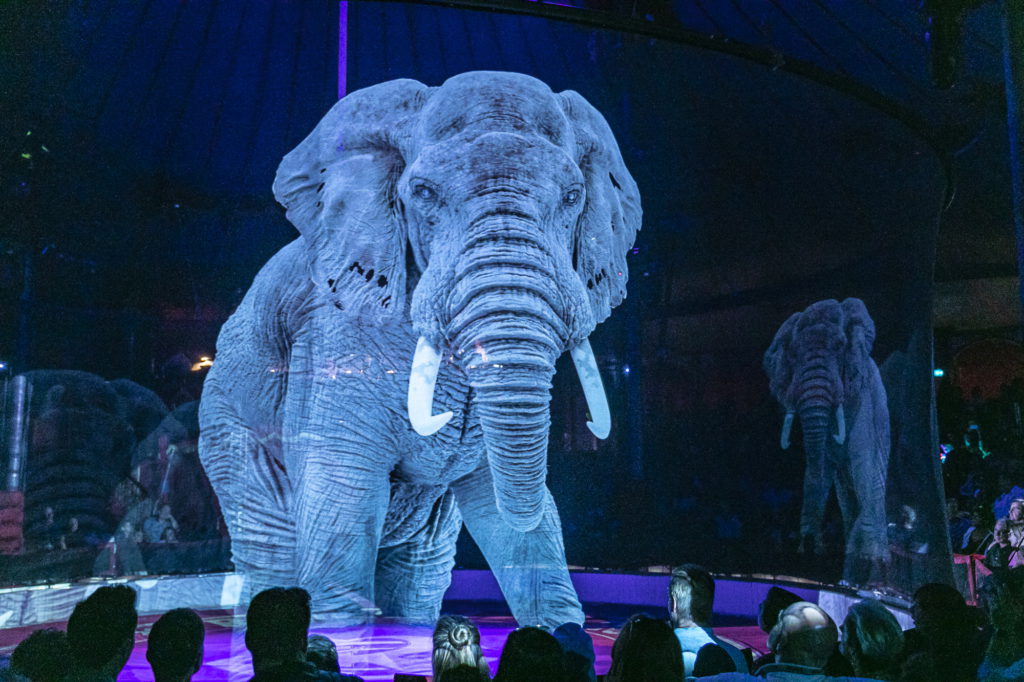 Despite this, many circuses with heavy focus on animal acts did not appreciate Roncalli’s transition to modern technology. “Since last year, I don’t call my circus a circus anymore. I now call it Circus-Theatre Roncalli, because we were and are now closer to theatres.”

Roncalli is continuing to work and adapt its holography whilst also being the first circus to be plastic-free. “Our popcorn is only sold in paper bags instead of plastic bags. In addition, we now also offer vegan and vegetarian food.”

For Paul, his passion project has become the start of changing the circus industry for the better. But is technology the only way to stop using animals in the circus?

Charlie Wheeler is one of the founding members of Barely Methodical Troupe, a circus without animals. “We are an experimental acrobatic company that only uses the human spirit,” he says. The company were founded in 2014 and has been performing around the world.

Wheeler explains: “Animals are only one aspect of traditional circuses and, in the past 30 years or so, more contemporary outfits have risen and developed the human aspect of the art form, capitalising on what we do best as a species: storytelling.”

Wheeler tells me how the entry point of circus artists has widened too, with the advent of circus schools offering higher education courses, which is how he was introduced, similar to other forms of art. “This means one doesn’t have to be bred within a circus family, giving other artists the opportunity to walk in to the figurative Big Top armed and ready to apply their previous, for example, dance or theatrical experience to this ever-growing and maverick artform.”

The circus industry is evidently changing and adapting whilst we continue to combat animal cruelty. Wheeler says: “Many circus companies are characteristically and structurally more similar to touring theatre or dance companies. This helps mature the public’s perception of what circuses can be and inspires a whole new generation in another way.”

The idea of bringing “exotic” animals from abroad for people to see is an outdated concept. Barely Methodical’s use of acrobatics means that animals are becoming less and less vital for circuses because of cultural and artistic developments. Wheelie says: “We have created our own menagerie of the human soul and spirit to share with the public.”

Both Roncalli’s and Barely Methodical’s motives of creating magic are similar in the sense of supporting animal welfare via the developing power of technology and our human selves.

Mansi Vithlani
Mansi Vithlani is a journalism student at City, University of London. A vegetarian her whole life and a massive foodie, she enjoys discovering more about veganism and eating vegan cuisine! She enjoys investigating social media based stories and how its influence has made a significant difference in the last few years.
Previous articlePet parrots: neglected birds fill up sanctuaries as illegal trade continues
Next articleRecycled plastic clothing: a sustainable revolution or just greenwashing?