Can veganism and intuitive eating co-exist? 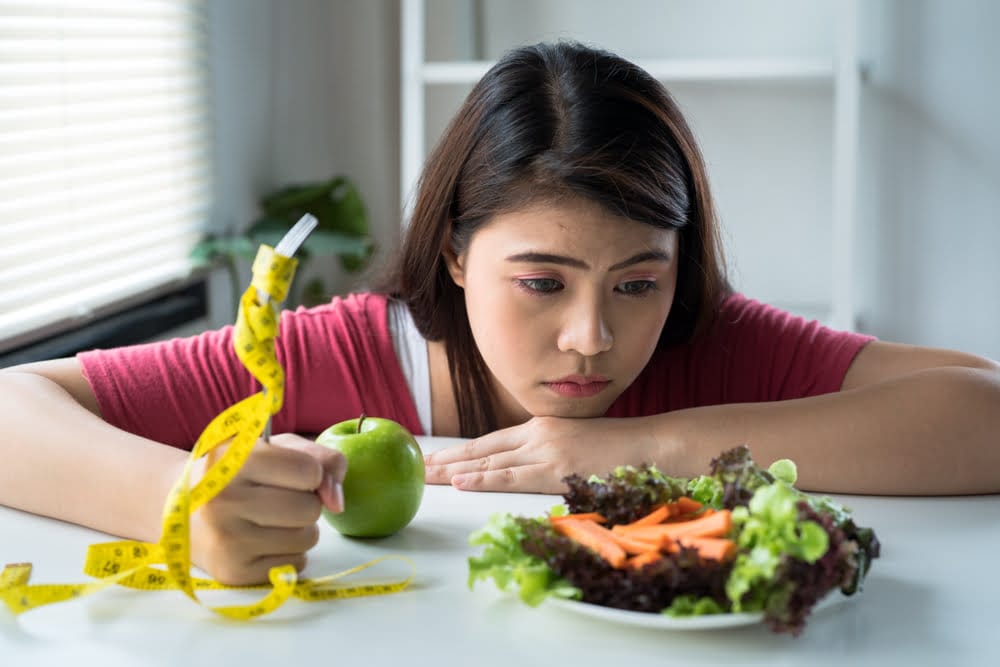 If you’re well-versed with the health and fitness industry, you’ve probably heard the term ‘intuitive eating’ being thrown around. But what does that mean for veganism?

It’s no secret that for years, the weight-loss industry has preyed on society’s unhealthy obsession with thinness using a variety of gimmicks. Paleo, keto, Atkins, Mediterranean and even vegan — if only I had a penny for the number of times someone recommended a new fad diet to me.

However, the never-ending pursuit of weight loss is an inevitable bloodbath, often manifesting as a strained relationship with food and body image. This becomes counterintuitive to the diet industry’s promise of ‘health and wellness’. The sad truth? Diets don’t work. A survey conducted by the Council on Size and Weight Discrimination shows that 95% of diets fail, and most people will regain their lost weight within one to five years. Additionally, according to Philadelphia Eating Disorder Examiner, 35% of ‘occasional dieters’ progress into pathological dieting (disordered eating),. This, worrying, can lead to as many as 25% advancing to full-blown eating disorders.

What is intuitive eating?

Intuitive eating (IE) is a framework established by two Health at Every Size dieticians, Evelyn Tribole and Elyse Resch, in the 1990s. It is perhaps the most popular non-diet approach to nutrition, if not the only.

In short, it is a philosophy that urges you to reject the diet mentality and reprogramme your intuition to respond appropriately to hunger and fullness cues. Just as you did as a toddler. It is a commonly used practice by those struggling with chronic or obsessive dieting, especially as part of eating disorder recovery.

Intuitive Eating is based on the foundation of the following 10 principles:

To learn more about each of these principles, we highly recommend reading the book Intuitive Eating by Evelyn Tribole and Elyse Resch. Their Intuitive Eating Workbook is an excellent resource too.

Practising IE, often referred to as ‘going all-in’, essentially means bidding farewell to anything labelled a ‘diet’, and giving yourself the unconditional permission to eat as much of anything that you feel like. That’s not to say IE promotes overeating junk food all day, but rather allows your body to regain full control over its nutritional needs and wants.

But where does veganism factor into all of this? Because the lifestyle comes with certain dietary considerations that can easily be deemed restrictive, many believe there is an inherent point of contention between veganism and intuitive eating.

To find out whether IE and veganism can, in fact, coexist harmoniously, we spoke to UK-based registered non-diet dietician and certified IE counsellor Katherine Kimber. The founder of NudeNutrition, she is highly experienced in providing motivational support to those seeking freedom from dieting and confusing nutrition information.

Check out our article exploring the connection between veganism and eating disorders.

Why is Veganism a controversial topic in the IE community?

While a vegan or vegetarian lifestyle can be a healthy way of eating and living, when embraced with a diet mentality, it becomes merely another fad.

Kimber says: “Many clients I work with have turned vegan once upon a time, with the main underlying intention of it offering weight loss. As veganism is accepted in society (and has risen significantly in the last 15 years), it’s an easy way to disguise restrictive eating behaviours. Hence, it can be a bit of a red flag for professionals working in the eating disorder/disordered eating community.

“Many people I have worked with have gone down this path as a form of further socially acceptable restriction. And this has often backfired at some point further down the line. It usually becomes clearer as I work with clients whether their dietary choices are from a weight loss stance (diet mentality perspective), or a health/ethical stance.”

Is it possible to reconcile ethics with intuitive eating?

What’s important to note here is that although veganism for some might be the new trendy diet, for most, it goes much deeper — a lifestyle choice motivated by ethics and personal values. In such a scenario, one’s food environment may simply not include foods they consider unethical. Food environments define what we look at as ‘food’ or ‘edible’ as per our personal standards. These are often determined by religion, geographical access and, you guessed it, ethics.

When asked if there is any space for ethics in one’s Intuitive Eating journey. Kimber notes: “If following a vegan diet is coming from a choice based on an individual’s value system. It won’t feel restrictive. If it’s coming from a diet mentality place. It will often backfire and play out in their eating patterns in a negative way. I always encourage clients to get curious about pleasure, satisfaction, and their value system. I also remind them that they do not need to label themselves as one ‘thing’ and therefore box themself into a category that could leave them feeling restricted. This can take the pressure off.”

Is intuitive veganism a thing?

Ethics aside, it is also not uncommon for people who have been practising IE for a while to inadvertently gravitate towards plant-based foods. Purely based on how it makes their bodies feel.

“Anecdotally. When I see clients embracing the concepts of IE. People do notice the benefits of eating more plants from a body feel perspective. However, I have not worked with a client that has intuitively turned completely vegan. [But] this isn’t to say it can’t happen. When a client starts to discover the satisfaction factor. They begin to realise what is right for them, and what isn’t,” remarks Kimber.

Perhaps the choice to add more plants to one’s plate could also be an attempt at gentle nutrition. Given the numerous health benefits linked to vegan/vegetarian diets. While Kimber does acknowledge the benefits of a vegan diet as compared to the standard Western processed-meat-heavy diet (including a reduced risk of diseases like heart disease, type 2 diabetes, and some cancers), she also points out the fact that this research cannot be taken as clear facts, because the studies have been purely observational.

Kimber highlights how socio-economic strata are an often overlooked factor when determining the so-called benefits of veganism. “We also know that the vegan population tends to be more health-conscious and are from a wealthier section of society, who are less likely to smoke, and more likely to participate in other healthy behaviours. People from higher socioeconomic groups often have more access to healthy foods. Safe places to exercise, more time, more facilities (to cook), more social support, and less stress. So is it the vegan diet that results in health benefits? Or are there other factors? We just don’t know,” she says.

A wholesome ‘non-restrictive’ vegan diet: What are some considerations?

To follow a healthy and safe vegan diet that includes all food groups. Kimber suggests a gentle level of planning. And organisation to get all of the nutrients required for this to be done healthily.

“If a client has a problematic relationship with food. And would like to continue to follow a vegan diet. I may be more inclined to encourage supplementation. Until eating patterns normalise and they have made peace with food. And the individual’s food choices have become more balanced over time. This is something we would continue to re-assess,” she says.

As per her recommendations, a balanced vegan diet would make sure that, over time, the individual is receiving a variety of colourful fruits and vegetables, as well as whole grains, calcium-rich foods, beans, pulses, and other alternative protein sources. In terms of supplements, key nutrients to be mindful of are:

And of course, fun foods should be enjoyed, for pleasure and satisfaction, as and when desired.

So, can veganism and intuitive eating coexist?

The short answer is yes. If practised with the right intentions and implemented correctly, one can become a vegan intuitive eater. If you have a history of disordered eating or need additional guidance through the process, it is highly recommended to consult a registered dietitian who can help you achieve your non-diet goals before you embark on your IE journey.

Admittedly, the process is daunting at first. But remember that IE is not about perfection and all about flexibility and learning. “I think it’s important to note that the ability to have choice around what we eat and eating behaviours is a huge privilege. The poorest 10% of UK households would need to spend 74% of their disposable income on food to simply meet the healthy eating guidelines. And so, simply doing your best is the best that you can do,” concludes Kimber.

Nadine Monteiro
Nadine is a Liberal Arts student at Leiden University at The Hague, with a passion for anthropology, sustainable development, and human rights. Dabbling in the fields of content creation and journalism led her to The Vegan Review where she explores her enthusiasm for health and nutrition. She is a strong advocate for body acceptance and Health and Every Size (HAES) and aims to bring more representation of body diversity into the mainstream. You're most likely to catch her either on a new travel adventure, knee-deep into an obscure podcast or attempting to make homemade nut butters - there is no in-between.
Previous articleBuzzfeed’s Merle O’Neal: ‘The intention behind veganism is more important than the label’
Next articleAllergy Box: New allergy-filtering store makes grocery shopping safe and stress-free