Cell-based meat heir Ira van Eelen: ‘One of our biggest dangers is taking things for granted’ 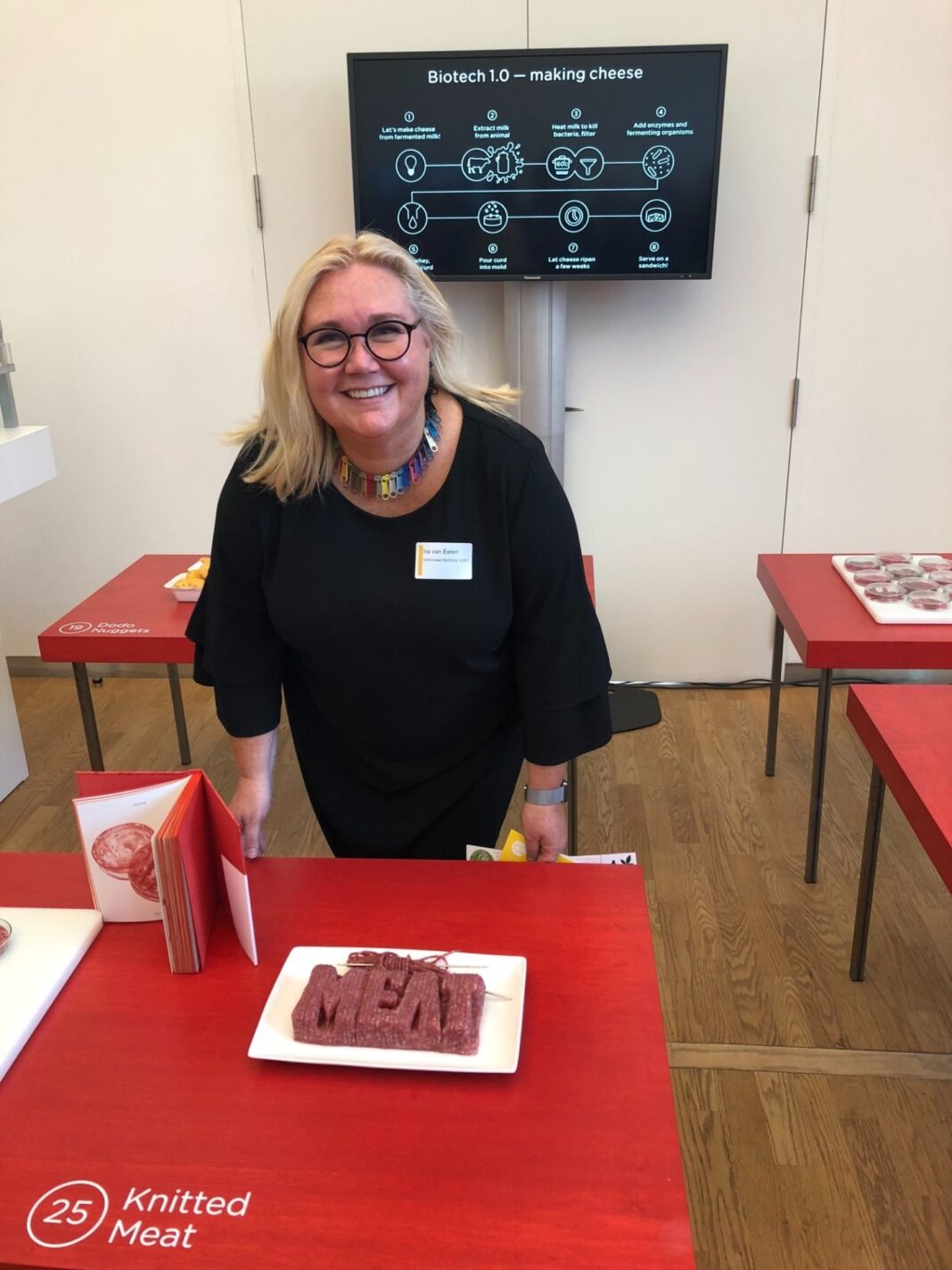 Cell-based meat inventor Willem van Eelen opened a world of new alt-meat possibilities. His daughter, Ira van Eelen, discusses his work, why eating meat shouldn’t have been a norm, and the future of farming.

“I believe there are other ways to go about protein, and to go about life,” says Ira van Eelen, co-founder of Kind Earth Tech (KET). As well as becoming food manufacturing company JUST’s advisor, a Cellular Agriculture Society (CAS) consultant, and CEO of Cultured Meat Farm, Van Eelen also recently went vegan. While she is a strong ambassador for alt-protein, she only went plant-based just over two years ago, feeling like she wasn’t practising what she preached.

“My own behaviour was starting to bother me. I was an active part of speciesism,” she explains. Surprisingly, her father, Willem van Eelen, a Dutch scientist renowned for his promotion of In Vitro Meat, also known as ‘The Godfather of Cultured Meat’, was not plant-based either. To Ira, the idea of shifting diets was way out of her reach.

But the feeling of being overwhelmed and alienated from her social life soon faded. Van Eelen has 40 years of clean, cultured meat experience up her sleeves, and she is proud to be an advocator for this industry — passing on her father’s legacy and building a smoother path for her son.

Growing up, Van Eelen looked at her father like most children look at their parents: “He was just my dad — we fought, I loved him, we had fun. He was one of the most interesting people to have talks with,” she recounts.

Van Eelen’s father passed away in 2015, and his daughter vividly remembers clearing out his office — not wanting to do anything with his career anymore. “For me, it was a closed book.”

But the CEO of JUST, Josh Tetrick, soon changed that. Tetrick found her father’s research and needed to know more, and one phone call was all it took. “I had to come clean with myself. Somehow Josh ripped that book open again,” she says. After thorough research and a check-up on how the industry was doing, Van Eelen felt excited: “I wanted to be part of it again.”

Before his passing, Van Eelen had already helped her father create the first-ever cultivated meat conference, filled with stakeholders essential in bringing his research to life, so she didn’t think taking on his spotlight would prove difficult.

But van Eelen notes how much her respect for Willem has grown since she entered this sphere of work. “I’ve only been doing this two years and I’m screaming, and frustrated and climbing up the walls. He did this for 40 years!” she exclaims. The scientist had a lot of “stamina”, as she calls it, which he used to gather a number of like-minded people — people willing to risk careers and investments just to get a grant from the Dutch government.

His work all began when his wife — Ira’s mother — sadly passed away. “They were best friends and business partners. Becoming sick and dying took three months, which was a shock to my father. He lost his wife, the mother of his kid, and his best friend,” recalls Van Eelen. Instead of falling into depression, the physician poured all his energy into stem cell research, where he witnessed a piece of tissue being kept alive.

He was aware that our population growth was on an upward curve, alongside it an alarming growth in demand for meat. And he knew that one day, this demand would lead to the world running out of resources. So, he asked: “Why don’t we make food out of this?”

Van Eelen still talks to her father occasionally. “I sometimes scold him, but mostly tell him about his accomplishments,” she laughs. Willem van Eelen discovered cell-based meat in 1980, and Ira believes it’s all due to his perseverance. “He was a visionary, so clearly driven, and it was contagious how enthusiastic he was.”

While her visions are big, Ira van Eelen wishes she had her father to share them with. “It’s sad he can’t see what I’m doing these days, but the saddest part is he can’t have all of these crazy and elaborate conversations with people all over the world. If he were here, he would probably tell me: ‘I told you so! You should have started working on this before!’”

Many vegans might argue that van Eelen’s work is not a solution to anything, because it’s not actually vegan. But Ira explains cell-based meat was never designed for vegans: “It’s supposed to be animal-like meat. That is what it is. But that doesn’t mean any animals have been harmed to make it.”

From a sustainable, ethical, animal-friendly perspective, Van Eelen says we can now have meat without having to kill anything, or waste resources for it.

And while she agrees that human beings are a big cause of the destruction of our habitat, she also thinks nature in itself is undoubtedly corrupt. “‘Eat or be eaten’: that is the concept. From a fairytale perspective, it’s not nice.” So having cell-based meat could take away from this idea of nature being off-balance, without making people feel like they’re missing something.

“What most people don’t realise is we have a transition going on,” Van Eelen says. Shifting the entire world to a plant-based lifestyle would be ideal, but it’s not practical or realistic. She adds that we just have to shift away from the idea that meat is a norm, because that’s how we got in this place of uncertainty. “One of our biggest dangers is taking things for granted.”

A post shared by Cellular Agriculture Society (@cellagriculture) on Nov 29, 2019 at 8:59pm PST

One day, perhaps, cell-based meat may be completely vegan. Eventually, when things go full circle, animals will be fed with plant-based cells, and this will make cell-based technology fully plant-based.

However, Van Eelen says it’s not her intention to make people consume the same amount of cultivated meat as they are conventional. It’s more of a transition aid. And these products will also help trigger a part of our brains that we often don’t use.

Often, when given two choices, people will tend to switch on their fight-or-flight reaction, which doesn’t access the part of the brain storing knowledge. “If you add a third choice to the plant-based vs conventional range, that’ll make you think.” The entrepreneur explains that unconsciously, people know that there is something wrong with conventional meat, so if they are put in a situation like this, they are more likely to choose one of the other two.

Outside personal benefits, cell-based technology could also bring vast benefits to the farming industry. With rising pressures on farmers to stop engaging in traditional methods, but no investments in what they could do instead, Van Eelen says she wants to establish a cellular agriculture farm. “I want farmers to jump into the industry and not see this as a threat.”

CAS, who she consults, has already created a future vision in the US for what mass cell-based protein production could look like. A “totally transparent”, “highly automated” mainstream creator, Van Eelen emphasises that this is only one of the possible routes to market for cultivated meat. Collaborating with farmers is already in the works in locations around the world, and having mini-cell tech-house appliances would be the ultimate method of getting people supporting this alt-protein from home.

The future is bright and ambitious for Van Eelen and the cell-based protein empire. In 10 years’ time, the entrepreneur wants to have used the newly founded KET to have shown just how vast this industry can grow. “Animal agriculture is in a transition period, it has huge amounts of money,” and the entrepreneur and her co-founder Olivia Fox Cabane are on a mission to use this capital for the better.

The industry has certainly come far since its origins in the 80s. Van Eelen is already doing her bit to record her part of history, having created an artefact that can be found in the German Hygiene Museum, Dresden, under ‘Cultured Meat Exhibit’.

Olivia Rafferty
Olivia is the Assistant Editor of The Vegan Review. An aspiring Middle Eastern correspondent currently studying journalism at City, University of London, she is passionate about the planet, she believes veganism is the first step to solving the complexities of climate change.
Previous articleNew alliance pushes for plant-based food to be at the centre of EU policy
Next articleSustainable packaging: How brands are innovating with plastic and alternatives