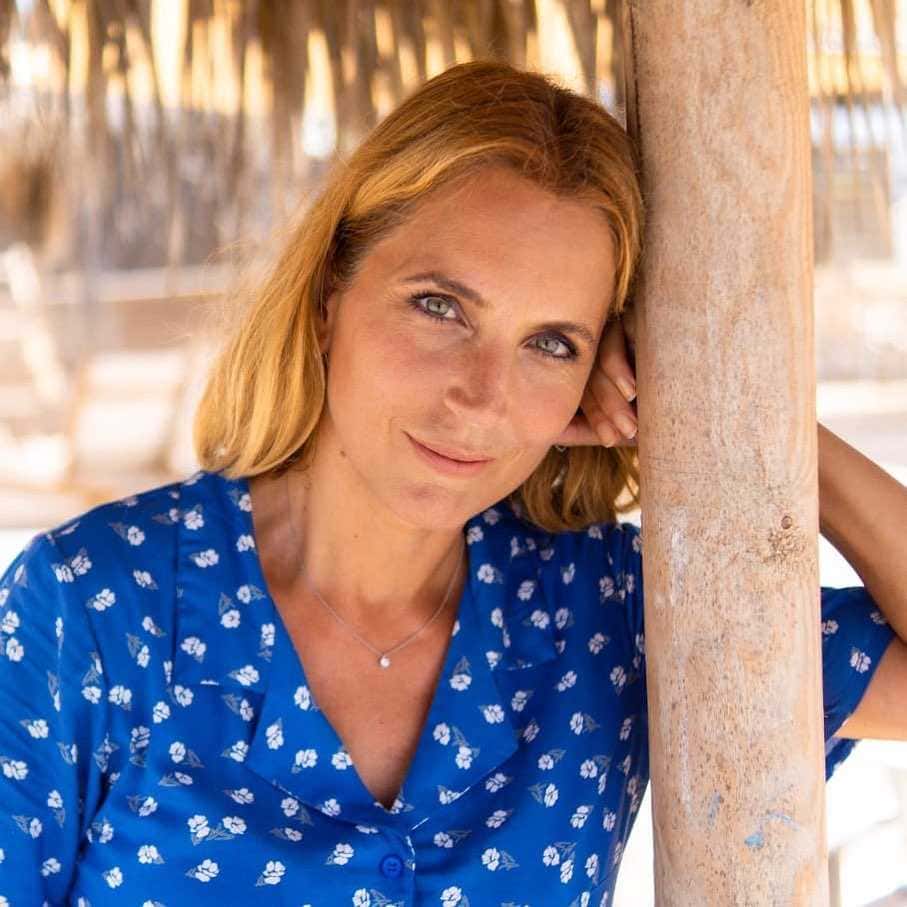 Channel 4 presenter Jasmine Harman discusses motherhood, trolls, Veganuary and what it’s like to be vegan in the TV industry.

“I became vegan in January 2014 after discovering that after a lifetime of vegetarianism, I was still causing harm.” Jasmine Harman recalls her epiphany moment when she realised that she was still unknowingly contributing to the suffering of animals: “As a new first-time mum, I was desperate to breastfeed and I was really struggling with it. I remember thinking: ’This is so ridiculous, I have just had a baby, why am I not able to produce any milk?’”

After being vegetarian since childhood, going on to have a hugely successful television career and beautiful family, Harman describes it as absurd that “at the age of 38, it had never occurred to me that cows, like any other mammal, will only produce milk when they have a baby.”

The clever marketing and portrayal of the ‘happy cow’ by the dairy industry is one of the most effective examples of conditioning that have ever existed. “I remember thinking how cows can produce milk for no reason, and I have a baby here and don’t have any milk?” recalls Harman. “I was almost envious of the cows for being able to produce milk when it dawned on me. It stopped me in my tracks.”

In this world of technology, there has never been an easier time to be able to watch footage showing what happens in the meat and dairy industries: “I looked at some videos online, which show what happens to calves after they are born so that humans can have their milk. I was completely floored by what I discovered, especially as a new mum.”

Harman recalls how painful it was to discover the reality about the standard practices within the dairy industry: “I think I cried for about three days and then decided I was going to go vegan.”

Resources like Challenge 22 are invaluable for people who want to go vegan as they help combat the misinformation and common myths about veganism with dieticians and nutritionists available to answer questions. “When we were having IVF, I was vegetarian at the time and a nurse literally told me to make sure I drink lots of milk so I get my milk. My husband was told that he needed to eat plenty of seeds for his seeds, and I had to eat a lot of eggs for my eggs. I don’t know what basis she had for that but anyway, it didn’t work out.”

A big year for veganism

2014 was an amazing year for veganism and a real turning point for both Harman and the vegan movement as, it was the first year for Veganuary. With only 3,300 participants at the time — Harman being one of them — she describes how she found the experience: “I had heard about Veganuary and started cutting things down after having my daughter Joy in the October. I started thinking about it all and preparing myself, mentally knowing that from January, that was it, I would be going vegan.”

Since Veganuary first began in 2014, it has taken place in 192 countries and seen a million people take part: “It gives people the opportunity to try it out for a month. As your family and friends know it is only for a month, I think you get a lot less pushback. I found it a lot easier than I thought it was going to be.”

Cheese was the thing that Harman struggled to say goodbye to the most: “I used to put cheese with everything as a vegetarian. I am excited to have just become part of The Brook, which has come up with an ‘amazing sauce for cheese lovers’, and its delicious vegan frozen ready meals will be rolled out in select Co-op stores.”

“It is very hard with people who you love when they are not vegan,” Harman explains. “You can’t force people. In my experience, it doesn’t work and it doesn’t make for a very happy life. I come from a big family, there are seven brothers and sisters. Four of us are vegan and my husband has now been vegetarian for about three years now.” She laughs as she goes on to say: “It has been a long time that I have been encouraging him to make the transition.”

Her two children are both vegetarian. “It isn’t perfect but I don’t think any of us can pretend to be perfect. They both ask a lot of questions about where food comes from and they are very aware of what being vegan means. They are definitely on their own journey.

“I think it is very hard to be a militant vegan. I try to educate, encourage and inspire people, although I am definitely harder on people who aren’t friends and family, so my work colleagues get a lot more stick from me.”

Veganism within the TV industry

Over the last few years, things have changed enormously. Harman happily reports: “There are so many vegans and vegetarians in the TV industry now. Everyone is a lot more open-minded and knows someone who is vegan now.” Restaurants in general seem to have become much better equipped at catering for vegans: “At work, we all have our own ‘annoying’ dietary requirements, so whenever we try to find a restaurant, everyone is catered for. I like to use HappyCow to find places where I can get a good meal.”

Even though times are changing with veganism going mainstream, a lot of people still find that they are bullied or ostracised for their lifestyle choices. Harman says that this, luckily, isn’t the case for her at work: “It is usually the other way round,” she says, and laughs. “I will usually just give them a sarcastic comment or come out with the facts. I tend to say it how it is so if someone says to me: Do you mind if I eat this meat when I am sitting with you?’ I will usually say: ‘No, you aren’t going to make me eat it. If you want to eat a dead body, then that is up to you.’”

It isn’t all plain-sailing in the industry, though, and Harman does struggle with conflicts between her vegan lifestyle and requirements of her job: “Sometimes, they will have a really famous local meat dish written in my script and I am so vegan I don’t even want to mention it or give it airtime.”

She describes the worst experience she had at work: “The director told us we had to go to a suckling pig restaurant. I remember saying to him: ‘Just run that by me again. You are asking me, a nursing mum, to go film and promote a restaurant that eats babies who are still breastfeeding from their mother?’” Needless to say, Harman didn’t do it and it definitely planted some seeds with the crew: “They hadn’t even looked at it like that.”

She adds: “The other thing that also troubles me is all the travelling, it is not ‘un-vegan’ to travel, but it all goes hand-in-hand with sustainability and climate change. So, I try to do carbon offsetting. We all have a responsibility to do what we can, but my job requires me to travel a lot and obviously that isn’t ideal.”

Being vegan in a non-vegan world

Being vegan in a non-vegan world can throw up many challenges: “We recently had a lot of work done in our house, so trying to makeover our home without using animal products was a big challenge. I wanted to try and make sure that everything from the paint on the walls to the pillows and carpets was vegan. I didn’t want to have any down, feathers, leather, wool or silk. There is a lot to think about. A lot of red paints have carmine in them, so we went for blues and greens. Some wooden furniture has been polished with beeswax and has glue from horse hooves so it really was a challenge, and an ongoing one at that.”

These aren’t the only obstacles Harman comes up against trying to live out her vegan lifestyle. Being in the public eye and using her social media platforms to be a voice for animals often attracts trolls and negativity: “Sometimes I block, sometimes I ignore, and sometimes, if I have the time and the inclination, I reply, which usually gets me into more trouble and deeper into it.”

Harman notes that there is a real difference between someone who is taking an interest but just doesn’t understand, and someone who is just being downright rude: “It bothers me even though I shouldn’t let it, but I just take things to heart too much. Sometimes I just don’t have the energy for it. I wish that I had more time to get into a conversation to try and nicely tell them to look into veganism as they may find that if they align their actions with their beliefs and morals, they won’t be as negative.”

As part of her activism, Harman tries to direct people to documentaries such as Earthlings and Land of Hope and Glory, although she finds them too hard to watch herself: “I am very sensitive to the plight of animals and people, and I can’t cope with cruelty. I feel like I know about it, I am not contributing to it and I am not the one who needs to see them.”

These documentaries are vital for people to watch so they can see the truth and reality of these industries that exploit animals. “They are extremely important for people to watch; I just don’t think there would be any benefit to me seeing them. I know I would just have nightmares and it will haunt me. Once you see something, you can’t unsee it.”

Harman really is a wonderful voice for animals. It is so refreshing to see someone in the public eye genuinely living out their vegan lifestyle as far as possible and using their platform to spread the vegan message and inspire others to look into veganism.

Tina Newman
Tina Newman is a writer, makeup artist and qualified Animal Nursing Assistant living in Suffolk, UK. She is the author of the vegan children's book series Vivi the Supervegan and mother to two little supervegans of her own. Tina had been vegetarian for 21 years until she found out what happens in the dairy industry and in September 2017 she went vegan overnight. She has been a passionate animal rights activist spreading awareness and helping to educate others ever since.
Previous articleThe World Plant-Based Taste Awards 2021 are open for submissions
Next articleWhich are the best vegan biscuits to enjoy with your coffee?