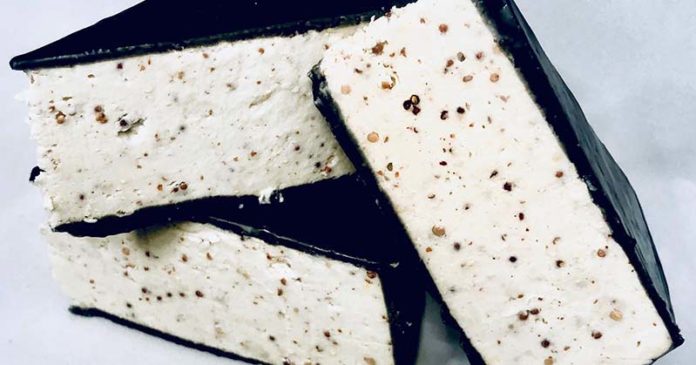 Cheeze & Thank You as disclosed by Vegout was at Chicago Vegan Test Kitchen in 2019, where Founder Megan Schmitt was sampling and selling her vegan cheese. The popularity for soy-based, nut-based and seed-based cheese such as Herbed Feta, Pesto Mozzarella Capri and Queso Blanco increased quickly, and Megan sold out at every vegan pop-up.

“I really focus on fun artisanal flavours that consumers can’t typically find at a grocery store, and If I had to pick a classic that I never get sick of, I would personally pick Dill Havarti or Mozzarella Capri every day,” said Megan.

About Cheeze & Thank You

Founder Megan began making vegan cheeses when transitioning from vegetarian to vegan. TShe always had a passion and a love for cheese, and like most of us immediately noticed that much of the vegan cheese available was missing the mark on flavour or texture. “There was almost nothing available to meet my want for artisanal, funky, and interesting cheeses,” she said. It was either stop eating cheese altogether or learn to make her very own vegan version.

Cheeze & Thank You started as a passion and came with an incredible amount of hard work as Schmitt told VegOut Chicago,  “I hope that C&TY is the product that helps some people switch to vegan (I always hear people say they could never give up dairy cheese). Or I hope that vegans share my product with their non-vegan friends and family and maybe make some people buy less dairy cheese because of it.” She plans to focus on brand growth and hopes to sell nationwide in the future.