The bee’s knees: A complete vegan guide to why bees are important 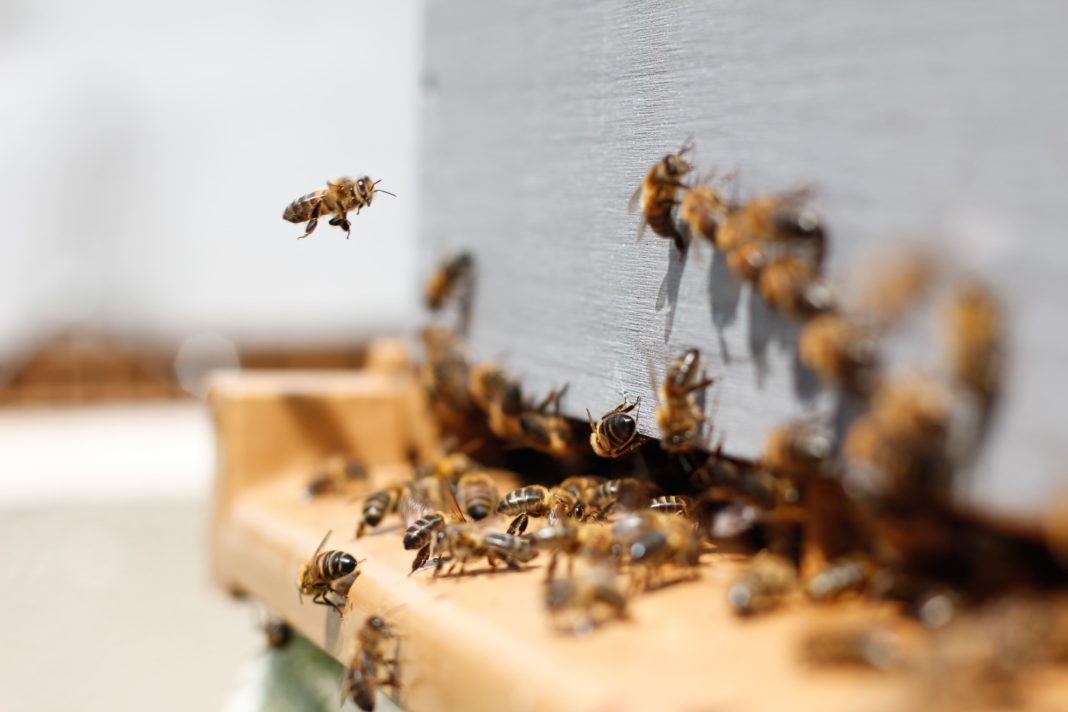 Why Are Bees Important?

Ever heard of the phrase “the bee’s knees”? It’s used to describe something that’s pretty awesome and how fitting that it should use such an incredibly impressive insect’s lower limbs as a coincidental metaphor. In fact, a bee’s knees (they have several) are covered in tiny little hairs that collect pollen from flowers. This ability to carry pollen around on their legs enables bees to pollinate one-third of the food we eat and 80% of flowering plants!

We don’t need bees to pollinate every single crop, but a 2015 study revealed that without pollinators a population’s levels of vitamin A are at risk of being very low, leading to various malnutrition-related illnesses. What’s more, bees are known as a keystone species, which means that they are relied upon by many other animals, insects, and plants and help to maintain biodiversity. The very real possibility of bee extinction can have a huge knock-on effect on the health and well-being of the planet, which is why there is now so much emphasis on saving the bees.

Honey is produced by bees and, as these are (insect) animals, under the definition of veganism, honey is not considered vegan.

“A philosophy and way of living which seeks to exclude—as far as is possible and practicable—all forms of exploitation of, and cruelty to, animals for food, clothing or any other purpose; and by extension, promotes the development and use of animal-free alternatives for the benefit of animals, humans and the environment. In dietary terms it denotes the practice of dispensing with all products derived wholly or partly from animals.” The Vegan Society

Nevertheless, this is a very controversial subject within the vegan world and hotly debated due to the perception that beekeeping may help to conserve the bees. Let’s look at how and why honey made to provide a definitive answer for this one:

How is Honey Made?

At the same time as gathering pollen from flowers, bees extract nectar through their tube-shaped tongues and store it in their crop stomachs (they have two stomachs – one for collecting nectar and one for eating!). Once this is full, it can weigh almost as much as the bee does! Imagine carrying that around on our bellies… 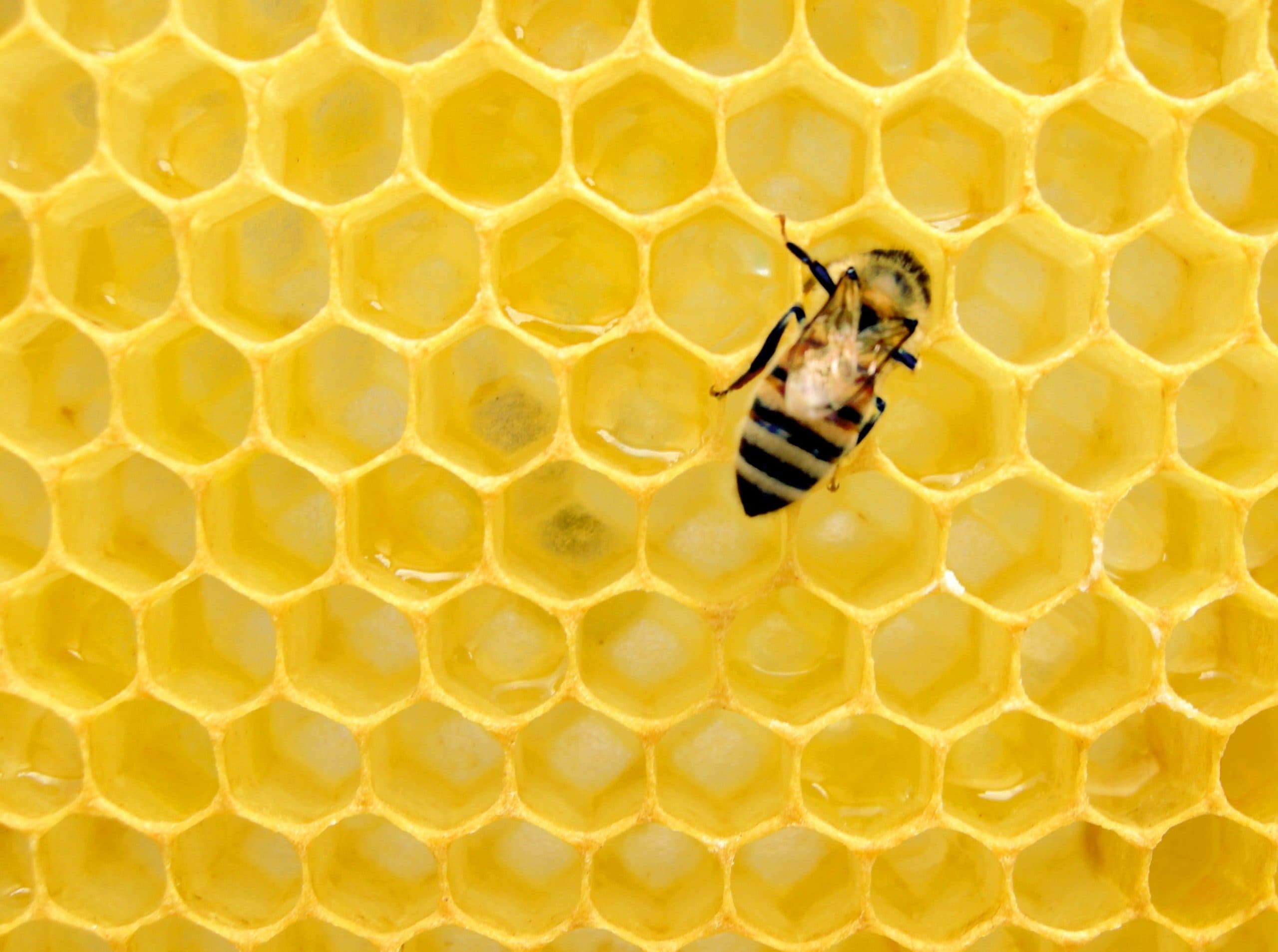 On their way back to the hive, forager bees release enzymes into their crop stomachs, which help to prepare the nectar for storage. After arriving back home, the bees regurgitate their contents straight into a house bee’s mouth, in a process called trophallaxis. The house bees then chew the nectar to break it down into simple sugars ready to be saved in the cells made from beeswax.

Over time, the bees promote water evaporation by fanning the cells with their wings and transforming the contents into the substance that we know as honey. This process is a preservation technique, which prevents pathogens from infecting the honeycomb. The cells subsequently sealed with a cap of wax and saved until required.

Why Do Bees Make Honey?

A colony of bees (superorganism) has to fly 55,000 miles and visit two million flowers just to make 450 grams of honey. That doesn’t even take into account the work that required to store honey and maintain the inside of a hive. So, why do bees go through all that effort to make it? Honey is their food supply.

Alas, flowers don’t bloom all year round and this means that bees don’t always have access to food. Consequently, the honey they save in capped cells is vital for their survival, especially during the winter months.

To Bee Or Not To Bee?

Taking into account the above information. And since the definition of veganism is widely accepted as avoiding the exploitation of animals, then honey, beeswax, and other bee products not considered suitable for vegans. Not to mention the animal cruelty that inflicted by the commercial beekeeping industry, which includes wing clipping, culling, monocrop migration, etc. 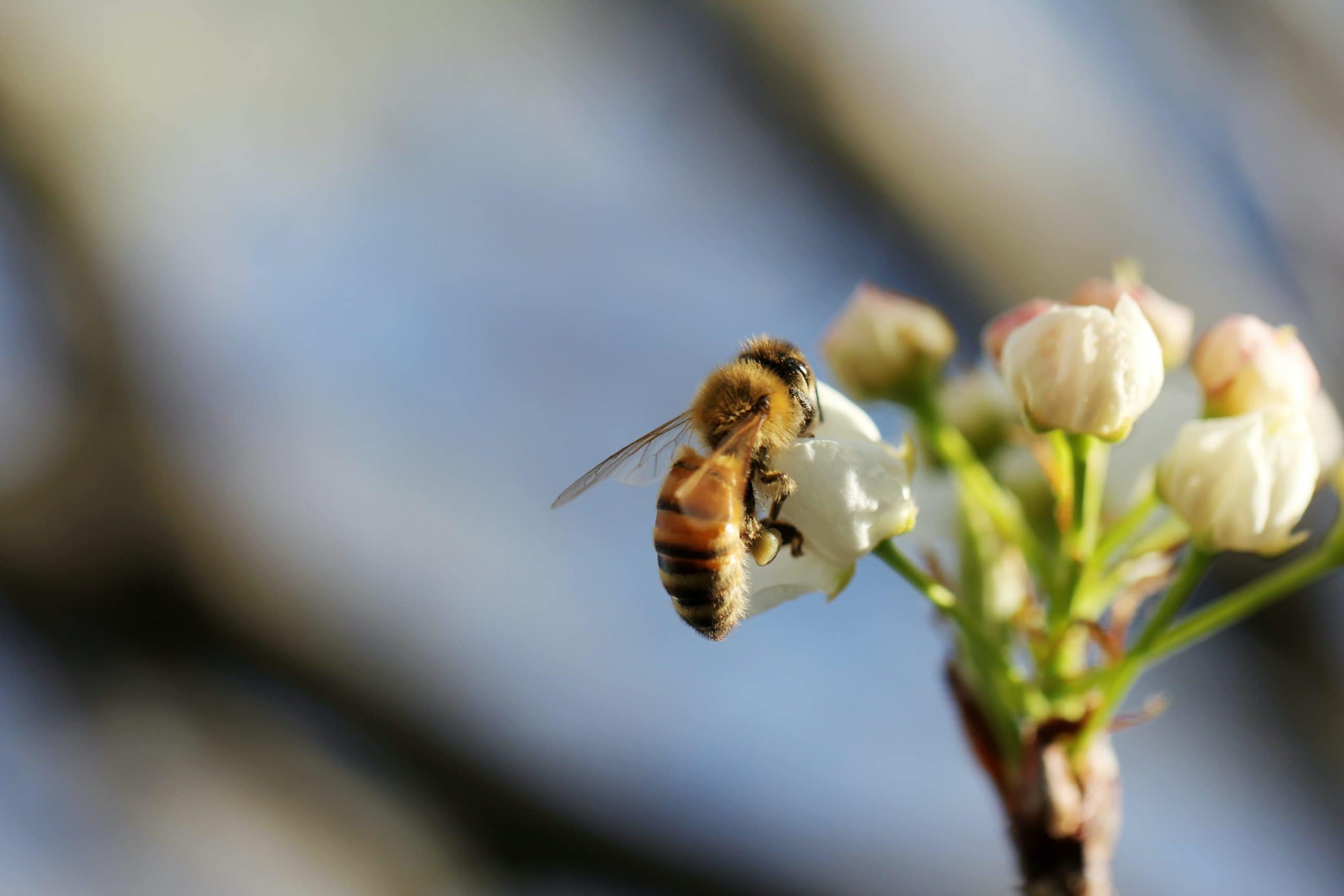 In contrast, there are those that argue otherwise. For instance, it could be said that buying honey from local beekeepers that follow more sustainable practices is considered vegan. Because of the efforts and the funding that goes back into protecting and conserving the bees.

I could really go down the rabbit hole about this subject and talk about the true definition of exploitation. Alternative methods of funding for conservation to save the bees, corruption, bees’ survival abilities, human interference, etc. But I’ll save that for a future post (I’m already on track to go way over my word limit)!

Why Should We Bee Worried About Bee Survival?

All this talk about honey. When we think about bees, many of us picture a western honey bee. However, there are 200,000 species of bees around the world, most of which don’t even produce honey. There is a danger that our focus on saving just one species of bee could blind us from the plight of others. In fact, honey bees aren’t even on the endangered list.

Nevertheless, 1 in 4 of the 4,000 bee species native to North America are at risk of extinction and our interference with the honey bee population certainly does have an impact on its more vulnerable relatives. I’ll explain below:

Similar to the dairy and egg industries. The commercial beekeeping industry is a form of factory farming. Where most (if not all) of the honey taken from the bees. And sold to humans in the form of food, cosmetics, health pills, etc. To prevent the bees from starving, beekeepers replace their food supply with corn syrup or sugar water. Honey naturally contains lots of micronutrients and has been proven to upregulate detoxification and immunity genes in bees, so providing them with substitutes can break down some of the insects’ natural defences.

In addition to the honey, natural beeswax in a commercial beehive is often replaced with petroleum-based or other synthetic honeycombs to speed up production. These have the potential to leak toxins into the hive, further weakening the colony. Since one of the leading causes of pollinator collapse is due to diseases, such as colony collapse disorder and American foulbrood disease, the commercial industry is not doing the honey bee species any favours.

Furthermore, many of these diseases are spread very easily via spores or parasites, which are easily transmitted to other species of bees and pollinators, via foraging bees, swarms, intruder species, beekeepers, and beekeeping equipment. Entire colonies are often incinerated to prevent transmission and to save other colonies from infection. 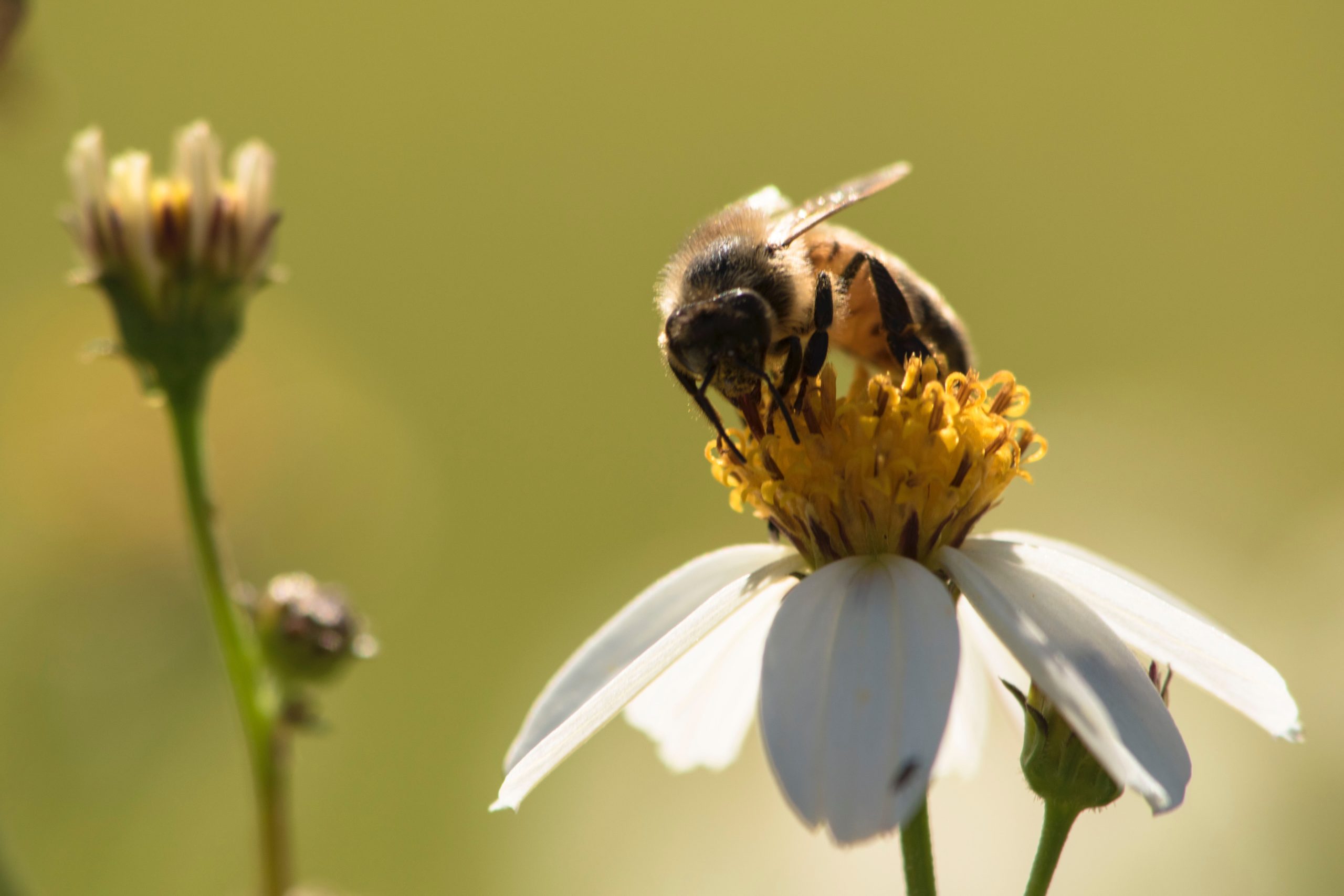 Much of the land that used to be home to flower meadows, hedgerows, trees, ponds. And water meadows is now home to hundreds of miles of mono-crops. Oilseed rape, corn, and soybeans are just some of the culprits that have replaced natural habitats and led to the reduction in bee numbers. Biodiversity is also integral to the health of an ecosystem. And a variety of flowers required in order for bees to thrive. According to the Xerces Society and Natural Resource Defence Council, the rusty patched bumblebee has lost 87% of its native range in the US!

Monocrops aren’t just detrimental to the insects. They also provide opportunities for pathogens to transmit to other species and create new vectors, ultimately increasing the likelihood of pandemics.

The increase in intensive farming and loss of natural habitat has subsequently exposed bees to more agrochemicals. Such as neonicotinoids and other pesticides. Neonicotinoids, in particular, have been linked to bee death and are widely used on farms and in urban landscapes.

Plants absorb these toxins and pass them on to pollinators. Indeed, 75% of honey samples from across the world have been found to contain traces of neonicotinoid chemicals! In one-third of these samples, the levels were enough to be harmful to the hive. To make matters worse, commercially-kept bees frequently used to purposefully pollinate mono-cultured crops. 60% of America’s commercial beehives are required to pollinate their $4 billion almond crop! So our plant-based diet might not be as vegan and cruelty-free as we think.

What Can We Do To Save Them?

The best way to support a healthy and sustainable population is to provide them with biodiversity. Pollinators rely upon our gardens to provide them with food, shelter. And water, particularly in areas that contain lots of monocrops. For more information on how to save the bees using your garden, the Friends of the Earth website has a great list of bee-friendly plants for all seasons.

On a bigger scale, there are several organisations working on rewilding our planet. To have a bigger impact, I suggest volunteering or donating towards their cause. Below are a few projects that are making a valuable impact:

If you are going to buy honey or beeswax. Avoid commercial producers and opt for a more sustainable and local beekeeper instead.

Get active and ask the powers that be to ban harmful chemicals and create more bee-friendly environments. There are some great petitions out there that aim to save the furry friends and are genuinely making a difference, including this one that influenced Europe to ban bee-killing pesticides.

Do some online research, read books, take a course in bee conservation. And learn more about these fascinating creatures and how best to save them. Learning how to protect swarms. And rehome colonies that situated in hazardous areas are vital skills to help support bee populations. So there may even be some beekeeping skills that are useful to develop.

Being vegan doesn’t absolve us of accountability. And there are many more things we can do to save the bees. And to promote a more sustainable and cruelty-free future. By buying organic food. We can help reduce pesticide use. Supporting the health of these creatures and the environment in general.

Alice Johnson
Alice Johnson is a freelance writer, keen musician, and co-founder of Vegan Sisters’ Online Community, which offers training courses for content writers. She is passionate about public health, animal rights, sustainable living, plant-based food, travelling, conservation, and rescuing stray animals on her way around the world. Alice has made appearances on BBC News and her work has been published in national scientific journals, print magazines, and on web-based news channels. When she’s not in the kitchen experimenting with cashew cheese, homemade body moisturisers, and vegan kimchi, you probably won’t be able to find her as she will be off gallivanting around the world.
Previous articleCosmetic testing on animals: Heading toward a worldwide ban?
Next articleTraditional Chinese medicine: A wildlife killing machine