On a mission to energise the food scene in an overlooked and undervalued community, Compton Vegan is a restaurant that breaks all the rules.

Lemel Durrah is no ordinary vegan chef. That already sounds like an oxymoron, but factor in a drastic career change and a stereotypically unforgiving neighbourhood and his initial mission to bring a vegan restaurant into the heart of Compton was one that seemed doomed to struggle.

The reality, however, has been beautifully positive.

A need for change

A corporate career with a steady wage. It’s something that many Americans can only dream of, especially those coming from a BIPOC heritage. But Durrah had a calling and it didn’t involve staying in a soulless job that paid the rent but failed to satisfy. Little did he know that a 40-day fast would be the catalyst for life-altering decisions.

Having felt immeasurable benefit from completing a fast, the transition to veganism was easy for Durrah and the increased vitality and health he enjoyed spurred him on to share the diet with as many people as possible. With improved sleep, more energy and a generally more positive outlook on life, he credits veganism as being the key to being a better person. It’s a story we hear a lot within the global vegan community, but Durrah decided to take his empowerment and share it with his community.

Shirk off any unsubstantiated ideas you might have about Compton and let Durrah take you on a journey through the streets he grew up on. He recalls there being no vegan food outlets and even less information about alternative lifestyles. The gentrification that was happening in more predominantly white parts of Los Angeles saw Whole Foods and Sprouts stores opening up to meet demand for a healthier lifestyle, regardless of necessary financial commitment. In Compton, Durrah talks about the local Food-For-Less store being the go-to option.

Acknowledging that as a youngster, he didn’t notice the difference between his and other communities, he now has the gift of perspective and can compare what Compton has, or rather doesn’t, next to other neighbourhoods. It’s telling that he is using his pull to contact chains such as Whole Foods to demand a local branch.

Once a fully converted vegan, Durrah realised that he had to travel to eat. Convenience or fast food had to be sourced at least 30 minutes away from where he was living and that’s when it hit him. To bring about real change and to offer viable options, inner-city communities such as Compton need a resident to make it happen. Durrah decided that it was up to him to be the source of tasty, plant-based foods that are affordable and nutritionally beneficial, within Compton. Outside change simply takes too long or is founded on dubious motivations. Compton Vegan is for the community by a lifelong member. It comes from a place of love, support and willingness to strive for better. Ideals that many in the neighbourhood can identify with.

Give the people what they want 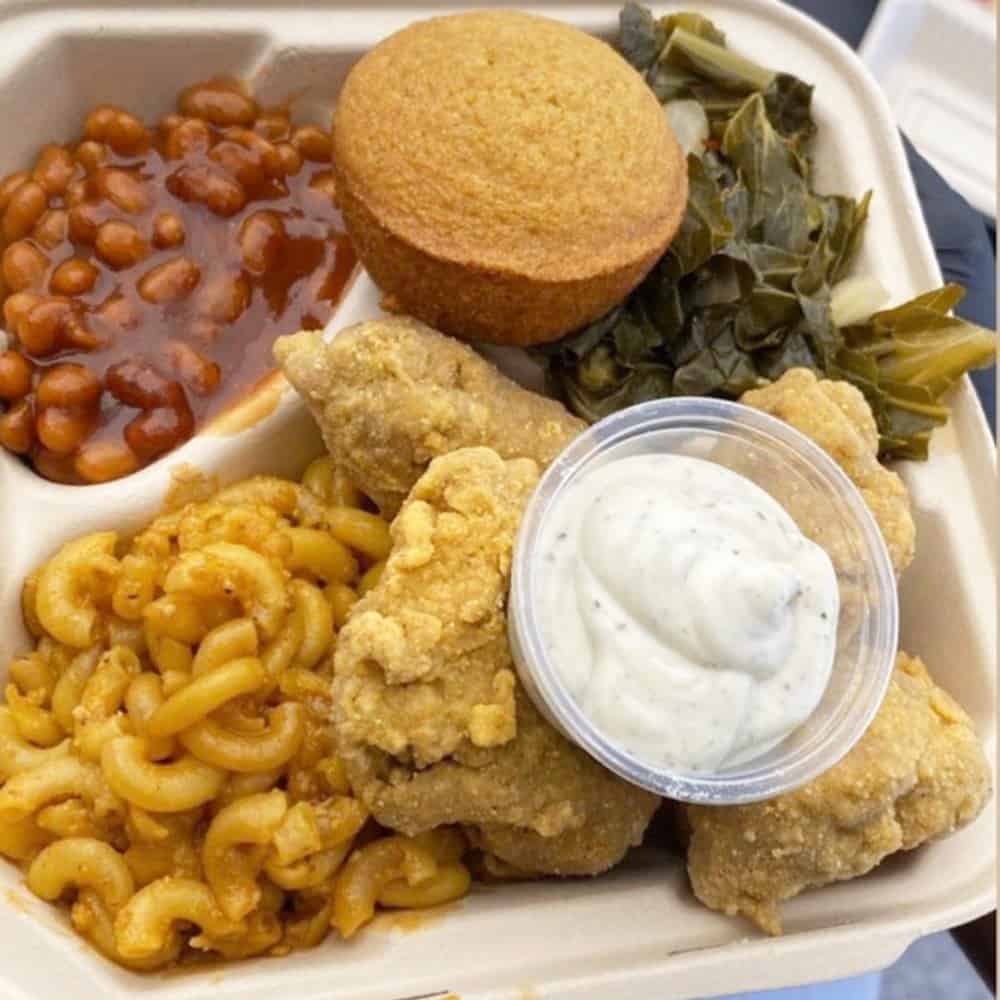 Looking in from the outside and deciding what a community needs rarely works. Actually, let’s be honest — it never works. Durrah talks about how the people he has grown up with and around want to eat chicken, hot dogs and ribs. Cheap cuts of meat that taste good and can be loaded up with easy condiments. That’s why Compton Vegan recreates them all, but with plant-based ingredients only.

The menu is a dose of the familiar with a little boldness built in. You’ve got to be brave to try something new and Compton is no stranger to fierceness, hence the dishes Durrah served proved popular from the very beginning.

Tweaking the recipes is a constant process for a self-critic, which is why Durrah is never happy to settle. Avoiding tofu and moving from soy to jackfruit, he saw good results and then turned his attention to gluten-free alternatives too. The need to be inclusive was clear to see and the love is tangible. It comes from a place of knowing, understanding and yearning. Every dish is prepared with the satisfaction of both the stomach and soul in mind, which is no doubt why Compton Vegan has proven to be such a success.

A menu of dreams 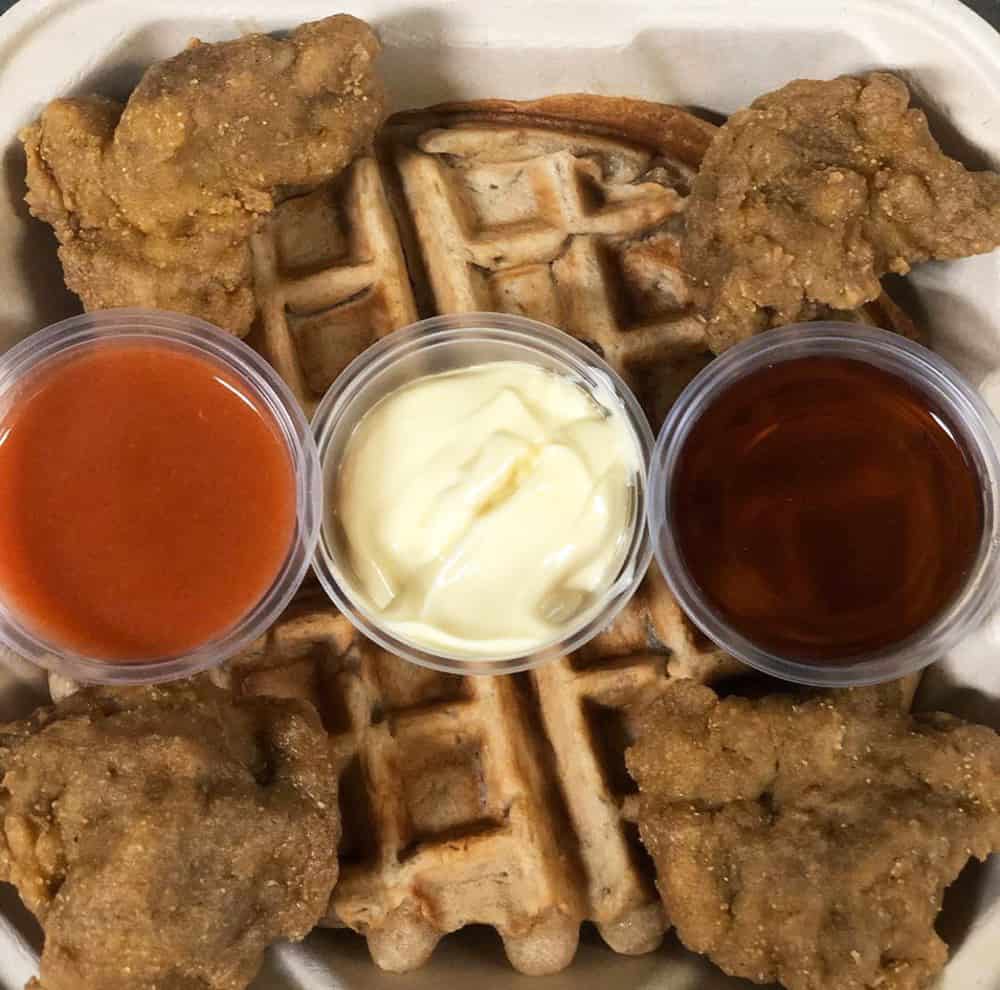 Durrah talks a lot about recreating the takeaway and home cooking that everybody in Compton is used to, but what does that translate into? A varied plant-based menu that includes everything from mac and ‘cheeze’ and gumbo through to fried chik’n bowls. Affordable and healthy, the dishes taste of something recognisable but better.

It doesn’t matter that cashew cheese, seitan and jackfruit are replacing the usual ingredients, because the taste is authentic and it’s local. It’s Compton cuisine 2.0, the old favourites made in a new way and with new motivations at their core. Durrah’s motivations, to bring health and happiness to his community. If there’s ever been a recipe more destined for success, we’ve yet to hear about it.

Read our interview with Jeffrey Boadi about his take on black communities adopting veganism.

Amy Buxton
Amy is a committed ethical vegan, raising a next generation compassionate human with her husband and their beloved dog, Boo. A freelance writer with a background in PR, she decided to use the COVID lockdown period to refocus her client base and has come to The Vegan Review as a senior writer and editor, before moving into her external content director role. "What we should be doing is working at the job of life itself" is Amy's mantra, courtesy of Tom from The Good Life.
Previous articleVegan Mob: the plant-based pioneers cooking up love in Oakland
Next articlePlant-based on the West Coast: the best vegan restaurants in Los Angeles