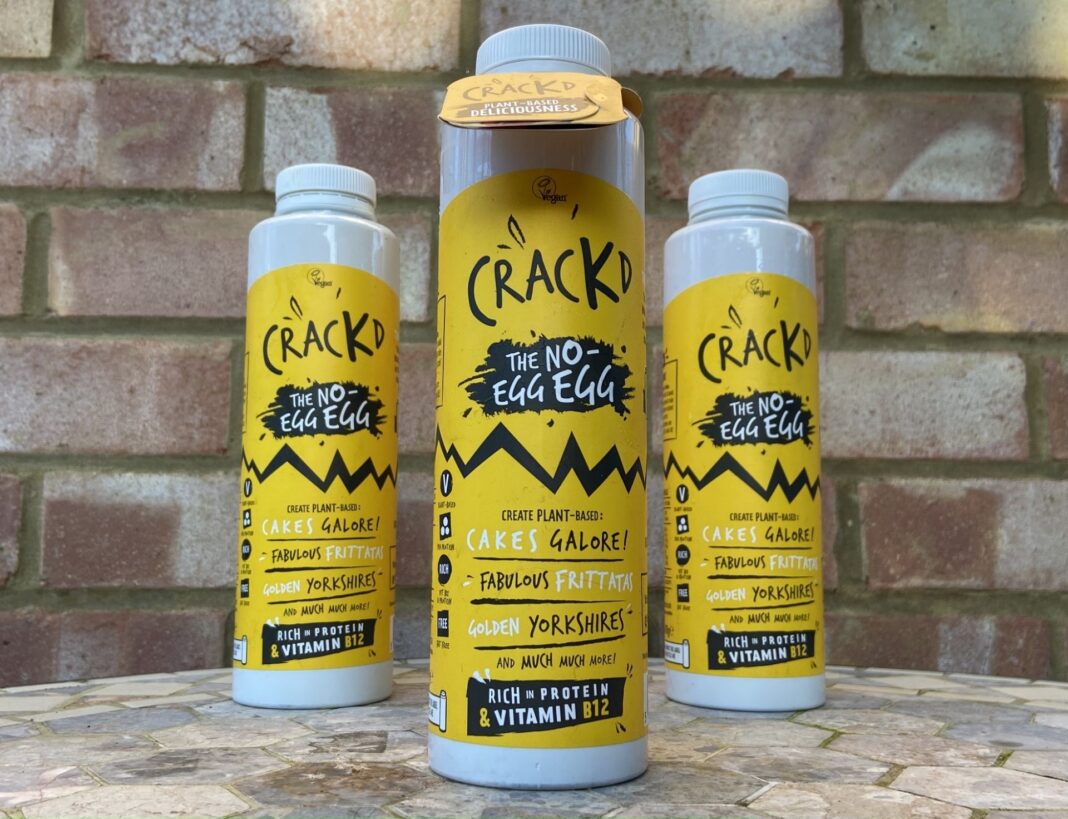 Launched in the UK last week, we tested and reviewed the Crackd vegan egg in five recipes. Here’s what we thought.

Look out: the UK has its first vegan liquid egg, Crackd. A startup originating from Tring, a small town 30 miles outside London, it launched its plant-based egg on Friday.

We taste-tested the pea-protein based product in five recipes, ranging from sweet to savoury, pan to oven. At first glance, the yellow liquid was very thick, much more so than a conventional beaten egg. The bottle recommends shaking before use, but it’s hard to know if anything is moving inside due to its viscosity. It doesn’t even fall off a fork — spatula highly recommended here. Either way, the thickness isn’t a bad thing, but it can make it a bit harder to work with at times.

Here’s how the Crackd vegan egg fared out in our review. 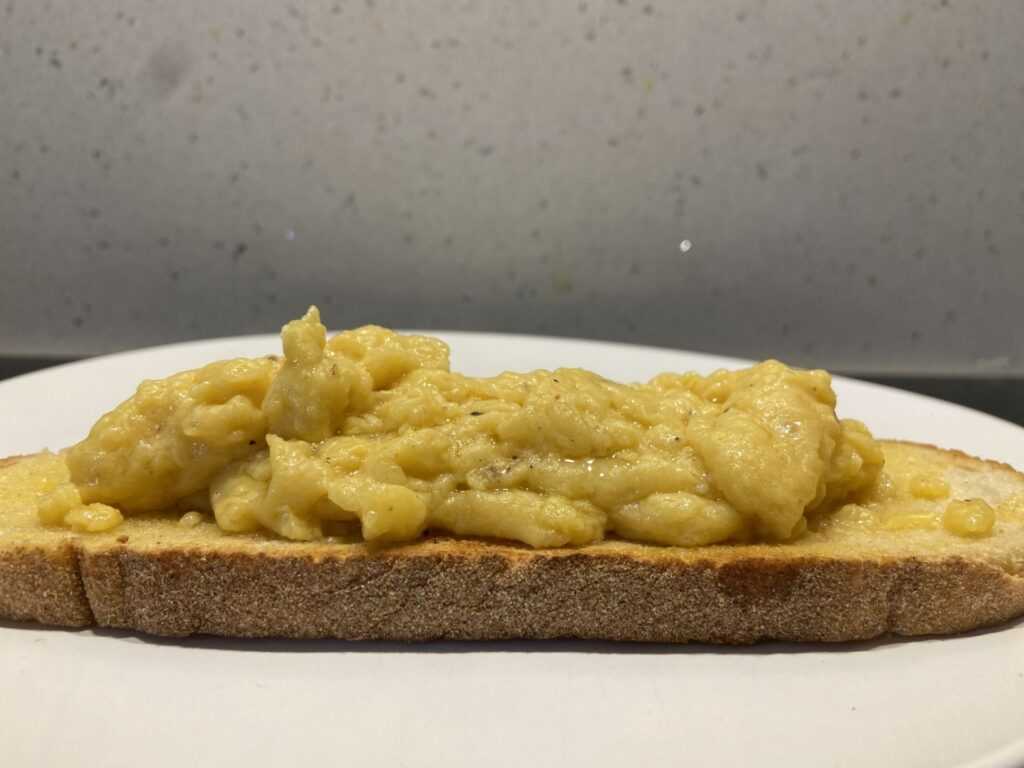 The ultimate test. No vegan egg is truly worth its black salt (apologies) if it doesn’t make a good scramble. The Crackd egg was interesting. The brand’s recipe card notes that the scramble takes longer than a regular egg, owing to the cooking time for pea protein — and that’s true.

It took considerably longer to reach a consistency of scrambled eggs, even though it coagulated as soon as we poured it into the pan. While cooking, there’s a strong whiff of the black salt — a timeless ingredient in all plant-based egg recipes. From the exterior, the texture seemed akin to a regular egg. But unlike the latter’s soft and fluffy consistency, the Crackd vegan egg was a little chalky and dense.

As for taste, the black salt essence came through strong, but it doesn’t taste like conventional eggs. It was missing the mildly sweet notes that complement an egg’s savoury flavour. But it paired well with toast, and is packed with nutrients like protein and B12 (thanks to the nutritional yeast). 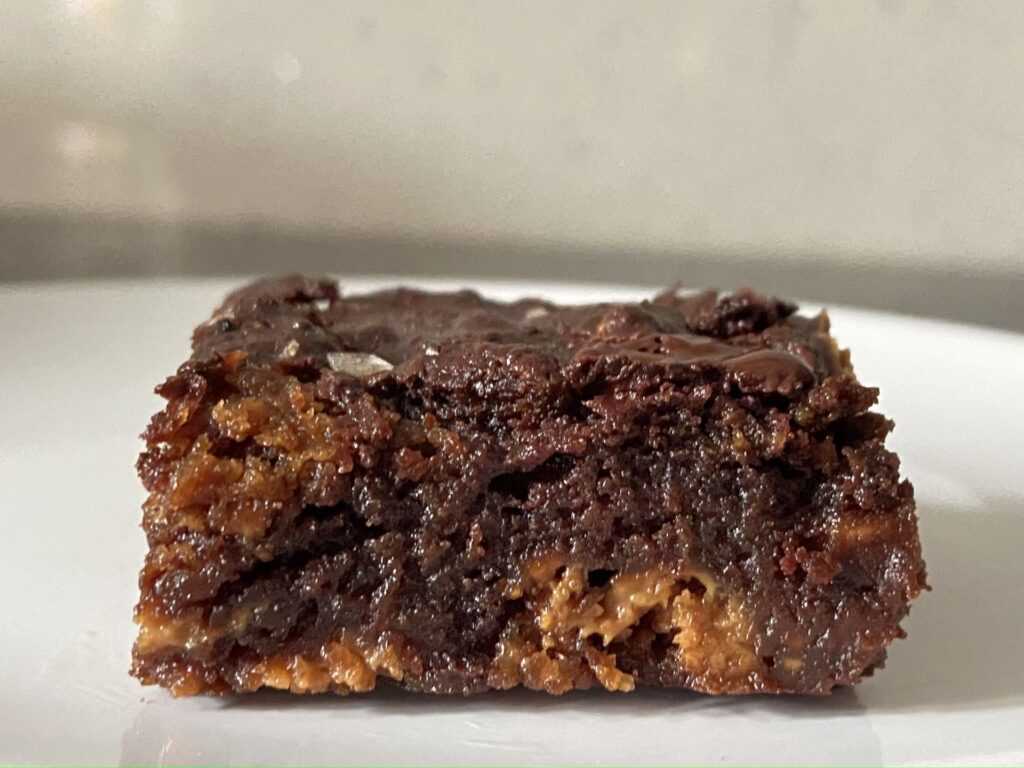 This was a whole different ball game. There were two things we were looking for in this review: whether the Crackd egg acts as an emulsifier and helps set the brownies, and is the flavour pronounced enough to overshadow the brownie?

The vegan egg here was magical. It worked perfectly as a binder, in a recipe you’d usually use a sweet potato for. The company says the product can be substituted in any egg recipe — using 60ml for one egg — but since pea protein takes longer to cook, it recommends lowering the oven temperature and adding 10 to 15 minutes to the cooking time.

But these brownies didn’t need that. The Crackd vegan egg set the brownies in the same amount of time as they do with sweet potatoes, and at the same temperature. The result was fudgy, chewy brownies — a knockout.

Crucially, the finished brownies had no flavour whatsoever of the pea protein egg or the black salt, which dominates its aroma. 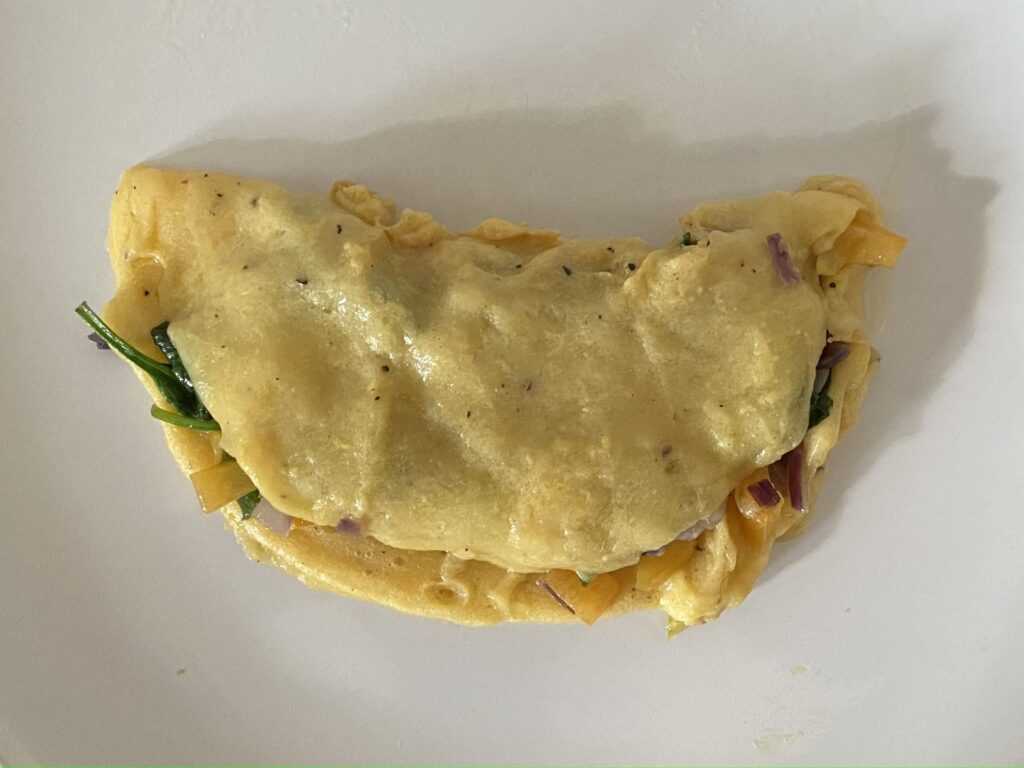 Again, we were aiming to find two things: if the structure of the egg holds up in an omelette, and what the texture is like.

The most notable feature was how, when poured into a hot pan (as recommended by the brand) and not stirred for a scramble, the Crackd egg formed strikingly large, one-inch wide bubbles. And for some reason, not stirring and turning it amplified the smell of the black salt.

Usually, when you cover an omelette pan with a lid, the egg expands and rises considerably, and contributes to an extremely fluffy final texture. But the plant-based egg didn’t have any reaction to being covered and continued cooking the same way. And, as expected, it took a lot longer to finish cooking than a regular egg — and even the scrambled vegan egg.

We added sautéed onions, peppers and spinach to one side of the omelette, and topped that up with some vegan cheese. This was the testing bit: the omelette was so soft, it became clear there was no point flipping it. So we folded it, very delicately. There wasn’t any browning, but there were bits of egg fond stuck to the pan. This resembled a more custardy, French omelette.

The soft consistency made it hard to eat as well — the omelette didn’t firm up much as it sat. Flavour-wise, the black salt was very dominant, but the texture was a lot better than the scrambled egg. While it wasn’t the same as an omelette, it somewhat resembled an egg jelly. That sounds off-putting, but it’s not bad. 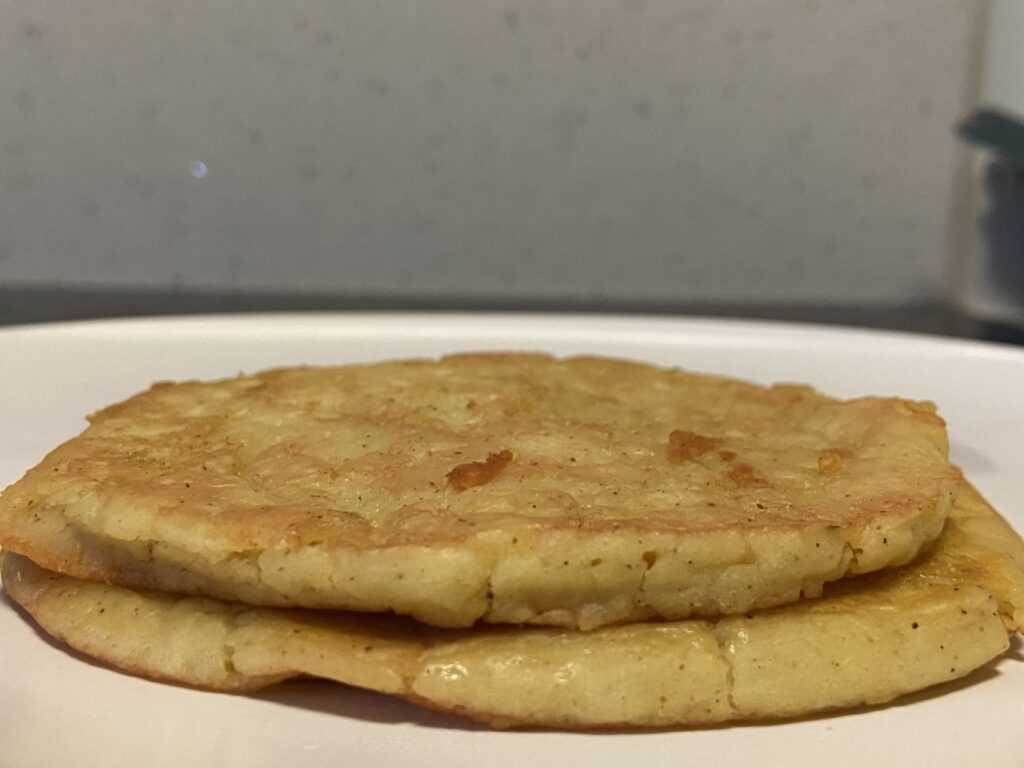 A must-try taste-test, reviewing the Crackd vegan egg in classic buttermilk pancakes was a delightful experience. They were quite possibly the best vegan pancakes I’ve ever made, and I’ve made a lot of them.

We were sceptical at first, since the pancake batter tastes a lot saltier than usual. We added some apple cider vinegar to soy milk to emulate buttermilk, and then poured in the Crackd egg, which is supposed to mimic a beaten egg.

But once poured into a pan, it’s a different world. Yes, the pancakes took a lot longer to cook and firm up, but it was worth the wait. The end result was a fluffy, soft-from-the-inside, utterly delightful pancake. The saltiness went away as the pancake cooked, and the egg acted as a perfect binder for the rest of the ingredients. You can’t go wrong with this. If only it were quicker. 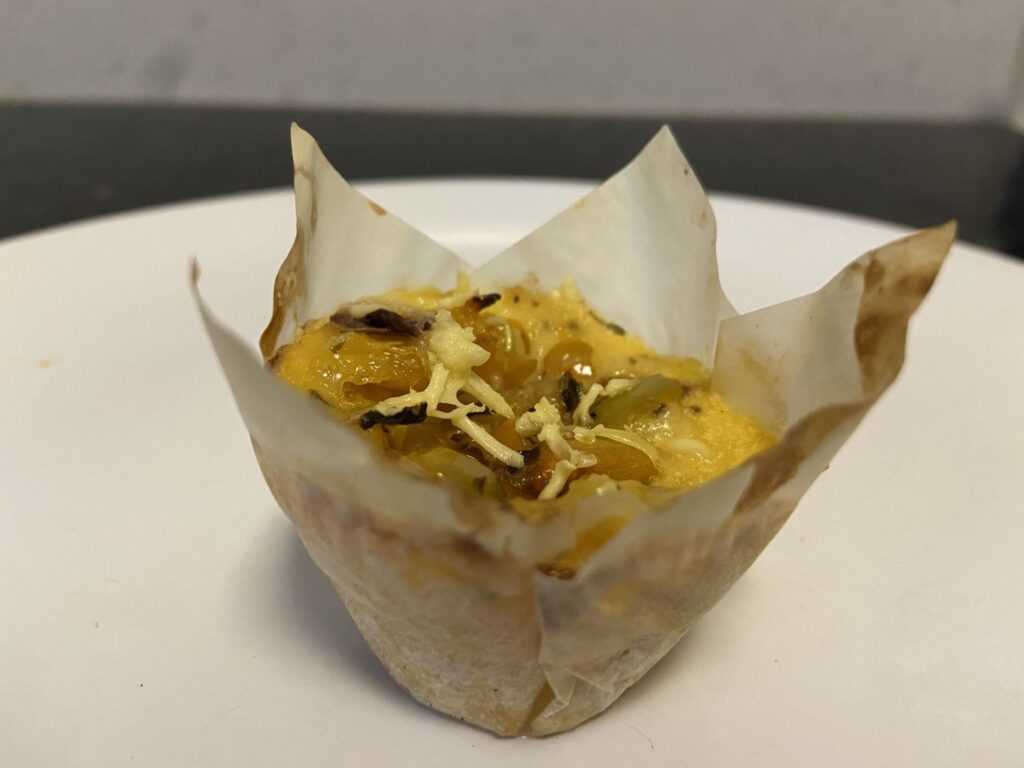 This was disappointing. One of the dishes from the company’s own book, this was the final test in the Crackd vegan egg review. We wanted to see how the egg bakes, without much done to it, as mini frittatas.

We sautéed some vegetables, added them to cupcake liners half-filled with the vegan egg, and topped it up with cheese. Breakfast muffins like these take about 20 minutes to cook. We baked these for about 35, and the result wasn’t thrilling.

The frittatas were custardy in the middle, and not in a good way. Worse, they were stuck to the liners, and the only way to eat them was by scraping the sides with a spoon. The plant-based egg didn’t set even after an extended period of time cooling down, and the texture was way too soft.

The Crackd vegan egg did really well in recipes where it emulated the chemical properties of an egg — as an emulsifier, binder and leavener. The brownies and pancakes were wonderful, and the subtle flavour the plant-based egg lends to the baked goods takes them to the next level. For baking purposes, we highly recommend this alt-egg.

But when it comes to using the vegan egg as a like-for-like alternative to eggs, while it isn’t bad, it’s not great either. The structure is the biggest issue, as the pea protein doesn’t firm up well enough to make an ideal omelette or frittata. The taste can be very black-salty at times, and the texture is hit-and-miss too. But for someone looking for a suitable substitute to their breakfast eggs, it’s a potentially welcome product.

The Crackd vegan egg is available in 490ml bottles, which lends the equivalent of eight eggs. At £3.99, that’s just about 50p an egg. While it’s pricey, the cost is understandable, given that it’s a plant-based version of a revered non-vegan ingredient.

The Crackd egg is available at The Vegan Kind, and will be in M&S stores from December 2020.

Anay Mridul
Anay is journalism graduate from City, University of London, he was a barista for three years, and never shuts up about coffee. He's passionate about coffee, plant-based milk, cooking, eating, veganism, writing about all that, profiling people, and the Oxford Comma. Originally from India, he went vegan in 2020, after attempting (and failing) Veganuary. He believes being environmentally conscious is a basic responsibility, and veganism is the best thing you can do to battle climate change. He gets lost at Whole Foods sometimes.
Previous articlePLANT CEO host Anant Joshi: ‘You’re voting with what you put on your plate’
Next articleWorld Vegan Month: Being plant-based in the UK