Héctor Bellerín Vows To Plant 3,000 Trees For Every Arsenal Win 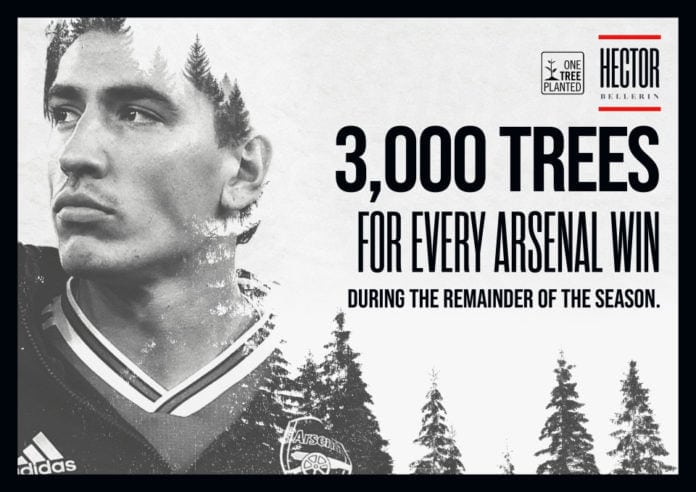 Arsenal defender Héctor Bellerín has said he will ensure 3,000 trees are planted for every victory by his team over the rest of the season to highlight the need to tackle climate change.

“For every game we win this season I will plant 3,000 trees to help combat the carbon emissions issues we have,” the Spainish international said on Twitter

The Arsenal defender has partnered global anti-deforestation charity One Tree Planted – which warns that 4,500 acres of forest are cleared every hour – to carry out the initiative.

For every @Arsenal game we win this season I will plant 3,000 trees to help combat the carbon emissions issues we have. Follow the link to learn more on how you can get involved by planting a tree with me @onetreeplanted 🌳https://t.co/mQSqqGc7R5 pic.twitter.com/d0J9OGa1jO

Trees will be planted in the Amazon rainforest which is under constant threat from logging.

Data from the government’s space research agency INPE showed that from January to May deforestation in Brazil’s portion of the Amazon rose 34 percent compared with a year ago to 2,032 square km (785 square miles), an area more than twice the size of New York City.

Héctor Bellerín has said ‘no’ to animal products by adopting veganism. According to The Athletic, Arsenal’s Héctor Bellerín has ben on a vegan diet since 2016. The Arsenal star learned that adopting a plant-based diet could reduce his muscle inflammation and decrease the pain levels helping his recovery.

Héctor Bellerín Moruno is a Spanish professional footballer who plays as a right-back or wing-back for the Spain national team and Premier League club Arsenal, where he is currently serving as the team’s vice-captain. Bellerín started his career at Barcelona and moved to Arsenal in 2011 where he has been ever since.

Bellerín , who has spoken out on environmental issues on many occasions, is passionate about tackling climate change.

In a statement, Héctor Bellerín said: “As a child growing up in Barcelona, I spent a lot of my with my Grandad in his garden planting trees and playing in forests so it’s an issue very close to my heart.

When I saw the great work that One Tree Planted do, not just the planting of the trees but within the communities as well, I knew it was something that I wanted to get involved in.”

He hopes others follow his example to better the environment.

“I hope that by doing this and using my platform, others will see how important it is to look after our world and donate to a cause which really affects us all.”

Diana Chaplin, canopy director of One Tree Planted, added: “It’s great to know that there are champions for the environment in the sports world.

Héctor’s passion for nature goes beyond words to make a real impact on the ground and help us plant trees where they’re needed most.

This will have a lasting benefit for people, nature, and wildlife for many years to come.”

“I care deeply about making a positive impact for future generations,” Bellerín said on his fundraising page.

“We need healthy places to play outdoors and where biodiversity can thrive in nature. Thanks to support from the team and fans, we can plant lots of trees together!”

Arsenal plays at Manchester City later on Wednesday as the Premier League resumes after a 100-day shutdown caused by the novel coronavirus pandemic.