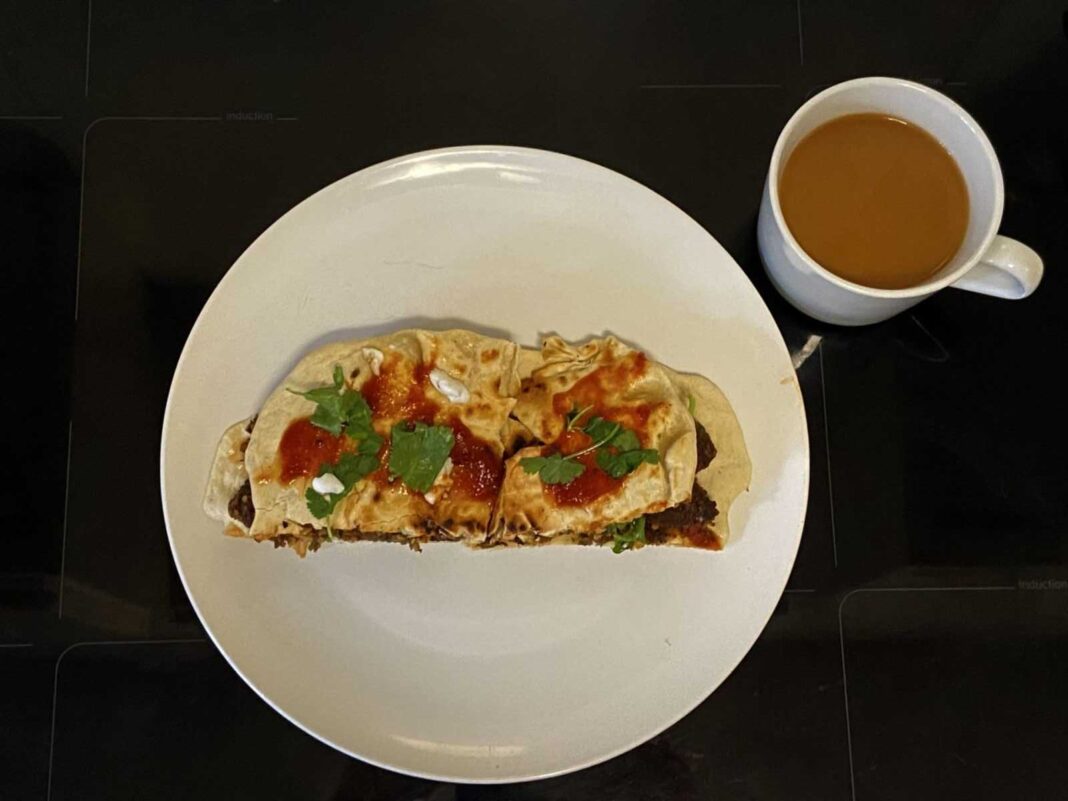 We followed the directions on Dishoom’s vegan sausage naan roll kit and reviewed how it cooked and tasted.

The recipe instructions were incredibly detailed, and called for careful reading before beginning. They were simple enough to follow, once you knew what you were doing. We started with the naan, which proved to be the toughest element.

The recipe recommended lightly oiling the surface before rolling the dough. If you haven’t rolled naan dough before, this is a learning experience and you’d be wise to allow some extra time to this. Owing to the presence of yeast, the dough is very stretchy, which makes it hard to roll. Once it’s taken off the surface — to be transferred into the frying pan — the yeast springs back and shrinks the size of the naan, so we recommend rolling it out a little longer than the recommended 20cm.

While the bottom of the naan cooked as expected, the top didn’t expand or fluff up once placed in the oven. You need to be very watchful with this, as a few seconds over and your naan will go from soft and rollable to crispy and hard. Dishoom mentions that vegan naan dough can crisp up more than regular dough, and that’s exactly what happened with our sausage kit as well.

The vegan sausages were in quite generous portions and took longer to cook than expected. The recipe card instructed to cut the sausages lengthwise, but they were too crumbly. While the outside crisped up enough, the inside was soft, which meant that the structure of the sausage didn’t hold up when attempting to cut across the length.

While these elements were cooking, we put on the tea. This was the easiest bit — all one has to do is thinly slice the ginger, place all the spices in the pan and bring the water to a boil, and then simmer until the spices have fully infused.

The recommended amount of milk was very interesting. Dishoom suggests that if you’re using whole milk, add 400ml of that, but if you’re using plant-based milk (it recommends full-fat oat), pour in only 200ml. This was curious, as most recipes call for dairy and alternatives to be used in interchangeable quantities.

To assemble Dishoom’s vegan sausage naan rolls, first came the cream cheese. It was very thick, which made it pretty difficult to spread evenly. Then we placed the sausages on one half to the naan, added some tomato-chilli jam and coriander, and folded over the other half. After slicing it across, we garnished it with more jam and coriander.

For all the obstacles that came up during the preparation, tasting Dishoom’s vegan sausage naan rolls was a seamless experience. The sausages were delightful, with the umami notes of the mushroom complementing the sweetness of the beetroot. The texture was great too; you can taste some small chunks of mushroom and onions. The one drawback was that the beetroot wasn’t pronounced enough; the mushroom and onion dominated the vegan sausage’s flavour.

The naan was probably the most impressive bit about the whole dish. It was chewy and stretchy, and the yeasted dough provided it with just the right amount of tang. As for the cream cheese, it’s hard to believe that was vegan, since it tasted exactly like dairy, and lent itself splendidly to the dish. The tomato-chilli jam was a tad too sweet, however, more reminiscent of ketchup than jam.

I’ve grown up drinking masala chai, and the tea was a reminder of home. The black peppercorns, cardamom, cinnamon, cloves and ginger elevated the Darjeeling leaves to a whole new level. We used Minor Figures, which is the ideal oat milk to use in hot drinks. But the ginger was a little too dominant in the chai.

All the elements of Dishoom’s vegan sausage naan roll kit work wonderfully and in tandem. Together, the vegan sausages, naan and condiments make for a delicious experience — and the masala chai is the perfect accompaniment — with the added satisfaction of having prepared it yourself.

For every meal kit sold, Dishoom donates a meal to Magic Breakfast, which provides free meals to schoolchildren in the UK. The restaurant chain has also added a nice touch to its deliveries; you can get kits delivered to multiple households in the same day, so everyone can cook and eat together.

The £16 price is a little too hefty, given that it is a DIY kit. But you’re paying for the experience as well as quality ingredients. Dishoom also recommends using the vegan sausage naan roll kit within 24 hours to preserve the freshness of its ingredients (especially the naan).

We highly recommend trying this kit out, but putting everything together would probably take more than the estimated 20 minutes. Order this for a delightful weekend brunch.

The Dishoom vegan sausage naan roll kit is available on its website for £16 plus delivery.

Anay Mridul
Anay is journalism graduate from City, University of London, he was a barista for three years, and never shuts up about coffee. He's passionate about coffee, plant-based milk, cooking, eating, veganism, writing about all that, profiling people, and the Oxford Comma. Originally from India, he went vegan in 2020, after attempting (and failing) Veganuary. He believes being environmentally conscious is a basic responsibility, and veganism is the best thing you can do to battle climate change. He gets lost at Whole Foods sometimes.
Previous articleVegan catering: niche and expensive or easy to source?
Next articleShop Like You Give A Damn reveals the impact of the UK’s Christmas presents