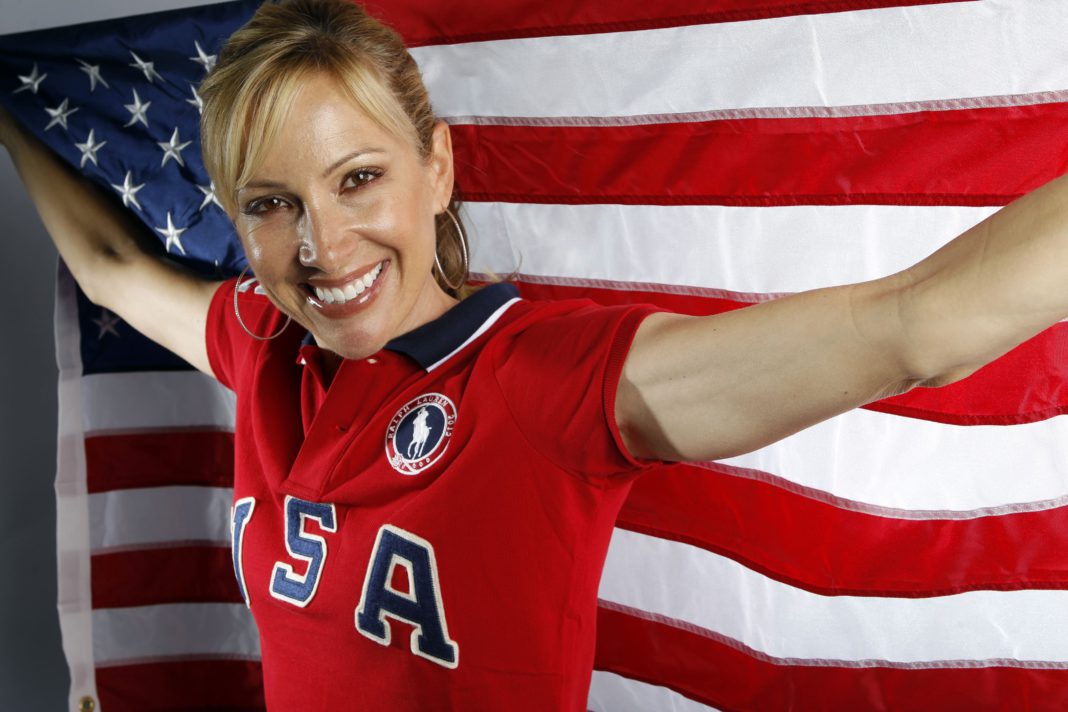 The Olympic medallist and star of Personal Gold and The Game Changers talks dairy-free alliance Switch4Good and making the LA 2028 Games vegan.

It’s a scene many vegans have watched. A tired Dotsie Bausch sipping Gatorade and carrying her bicycle over her shoulder, sporting a star-studded blue tracksuit with the word ‘OUCH’ written in red. It was 2012. She was 39 and representing the US at the London Olympics. But it wasn’t just her age that stood out — it was the fact that she was a plant-based athlete.

“I thought it would be a longer transition, but I just immediately felt like I could go kick ass,” you hear her saying in a voiceover. This was The Game Changers, the groundbreaking 2018 documentary that has been reported as Netflix’s most-watched.

It wasn’t the first time audiences had seen Bausch onscreen post the 2012 Games. These shots of her at the track were from a documentary released three years prior, Personal Gold, which goes behind-the-scenes of Team USA’s women’s cycling team preparing for London.

Bausch was essentially “playing herself”. The men’s team was banned due to the Lance Armstrong doping scandal. “We were just very head-down and in the work that it was going to take to try and get on the podium in the Olympics,” she tells me.

She likens it to filming The Game Changers. I ask her what she thought of some of the negative responses to the documentary. “I knew it was going to get a ton of flak, of course, because it’s so damn good,” she responds. “It just comes from the people who don’t want to change their own plate.” 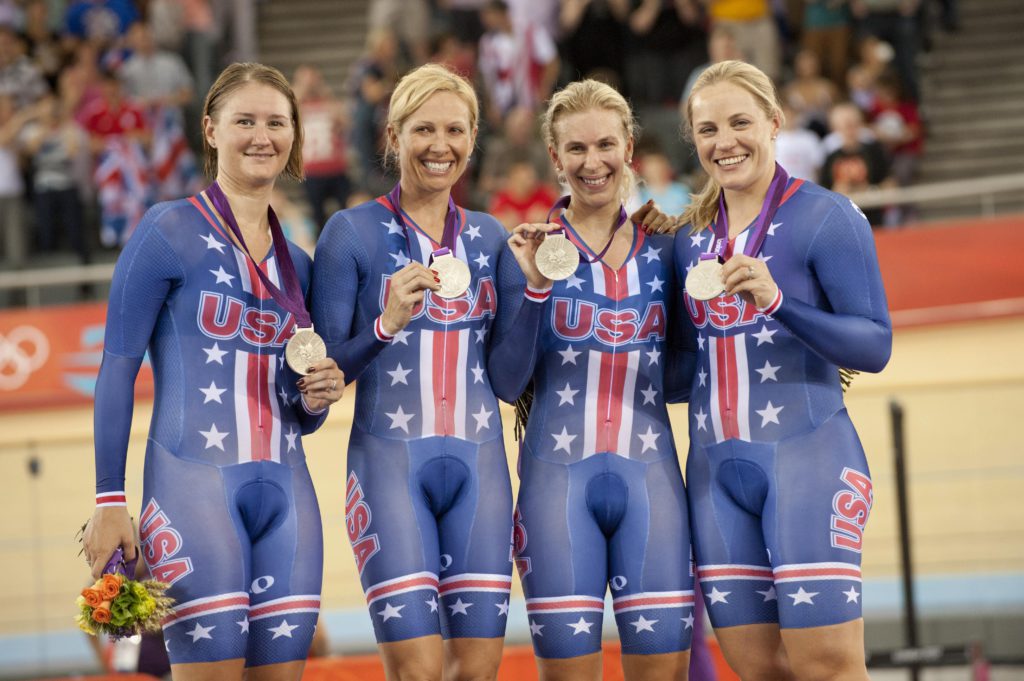 She changed hers two years before the Olympic Games. Raised in Kentucky, every meal she had as a child contained an animal product. But after watching an animal slaughter video — not the worst one, as she has come to find out — she switched to a plant-based diet overnight.

At 39-and-a-half, Bausch was an older athlete. She had taken up cycling in her late 20s. “I was healing from anorexia,” she recalls. Towards the end, she took up cycling on the suggestion of her therapist, to find something to move her body in a positive way again. “I obviously had some kind of hidden talent I wasn’t aware of. I just didn’t quit for 12 years.”

Training for the Olympics meant everyone around her questioning the decision. Her age meant recovery, repair and replenishment was harder than the “young whipper-snappers”. “But man, oh man, did the diet actually make me change for the better,” she tells me. Two years later, she stood on the Olympics podium, a silver medal in hand.

The Olympic Games and two documentaries — they’re enough to see that Bausch had a busy decade. But it doesn’t end there. In 2018, she also launched the non-profit alliance, Switch4Good. “It was born out of the desire to tell the truth like all of us in this movement are doing,” she says, adding: “And tell it in a way that might be a little different than how others are doing it.”

That entails multiple aspects: performance (“health bleeds into performance and performance bleeds into health”), food justice, government and corporate policymaking, dietary racism, and planetary responsibility. But its main focus is dairy. A coalition led by US Olympians and athletes like Bausch, swimmer Rebecca Soni and footballer Kara Lang, fighting against the dairy industry was important to them.

“The title sponsor of the US Olympic Committee is MilkPEP, so the dairy industry,” Bausch explains. “All of our years in training, we lived with this inundation of milk, dairy, whey protein and yoghurt. They were pushed on us as basically the only food that could actually really repair our system, and it’s all a lie.”

Watching a dairy commercial suggesting that nine out of 10 US Olympians drink dairy, she decided to push back. At the closing ceremony of the 2018 Pyeongchang, Switch4Good aired a commercial on NBC featuring “dairy-free athletes” explaining why they ditched cow’s milk. “It started as a middle finger, quite frankly,” Bausch tells me. “Stop with this misinformation and these lies. We know that’s not the case.”

The evidence-based organisation, which has the backing of medical professionals, took on another infamous dairy campaign last summer. In 1986, every American home watched the Milk… It Does A Body Good commercial, which is said to be the dairy industry’s response to falling sales. The tagline caught on, and Switch4Good curated a response originally to be aired in the lead up to the 2020 Olympics.

While the Games were postponed, Bausch decided to go ahead with the commercials anyway. For two-and-a-half months, the three adverts featured vegan Olympians delivering PSAs about dairy. 30 million people watched it, and 500,000 took action on the alliance’s website to ditch dairy. “It was a successful summer,” says Bausch, laughing.

There are two other major campaigns Switch4Good is currently working on. First, it’s asking the United States Olympic Committee to run an investigation of its title sponsor. Its bylaws include racial and social justice, wellness and health of the athletes, and integrity in sports. “By promoting cow’s milk, we find it to be in direct violation of those bylaws. Letters, calls, full-page newspaper ads — they’re all part of the effort.

The other, longer-term project is the 2028 Olympic Games in Los Angeles — where Switch4Good is based. When Bausch received the paraphernalia for the Games, she got the chills. And then she thought: “What if LA 2028 could be the first plant-strong Olympics in history?” She started thinking about the practicality of what it might look like. “How many LA-based restaurants, food companies and organisations would be excited to back that idea?” 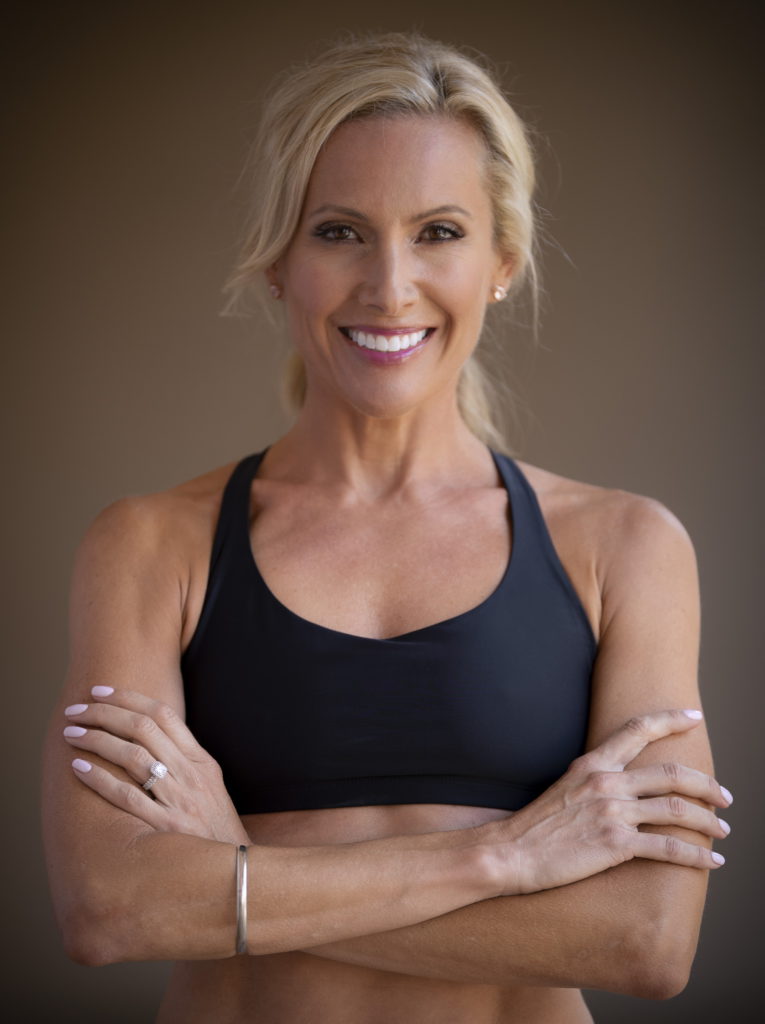 And Switch4Good is getting to work. Bausch has already presented to the LA 2028 sustainability director. “We only have seven years to go, but it’s going to take that much time.” She’s very hopeful of its success, though. “Every minute of every day, we are moving forward to an animal-free future.”

The LA 2028 organising committee has two goals — sustainability and fiscal responsibility. Bausch says it’s already very sustainability-forward, with no plastic straws or single-use containers and no new buildings, retrofitting existing structures instead. “They’re way ahead of the curve already,” says Bausch. “I’m just bringing in the pressure on the food aspect.”

While the organisers can’t direct the equipment athletes use — that’s up to the national governing bodies, she is hoping to get Team USA to have sustainably-sourced clothing.

Where does she see herself in five years’ time? “Just doing exactly what I’m doing right now.” She hopes Switch4Good will be a household name by then and have changed many policies and laws to accomplish a shift away from dairy. “I can’t imagine doing anything else. I’ll just fight until the end, I just will.”

Anay Mridul
Anay is journalism graduate from City, University of London, he was a barista for three years, and never shuts up about coffee. He's passionate about coffee, plant-based milk, cooking, eating, veganism, writing about all that, profiling people, and the Oxford Comma. Originally from India, he went vegan in 2020, after attempting (and failing) Veganuary. He believes being environmentally conscious is a basic responsibility, and veganism is the best thing you can do to battle climate change. He gets lost at Whole Foods sometimes.
Previous articleThe battle for vegan baby formulas and why we need them
Next articleMilk from yeast and 3D-printed meat: Israel’s vegan food revolution