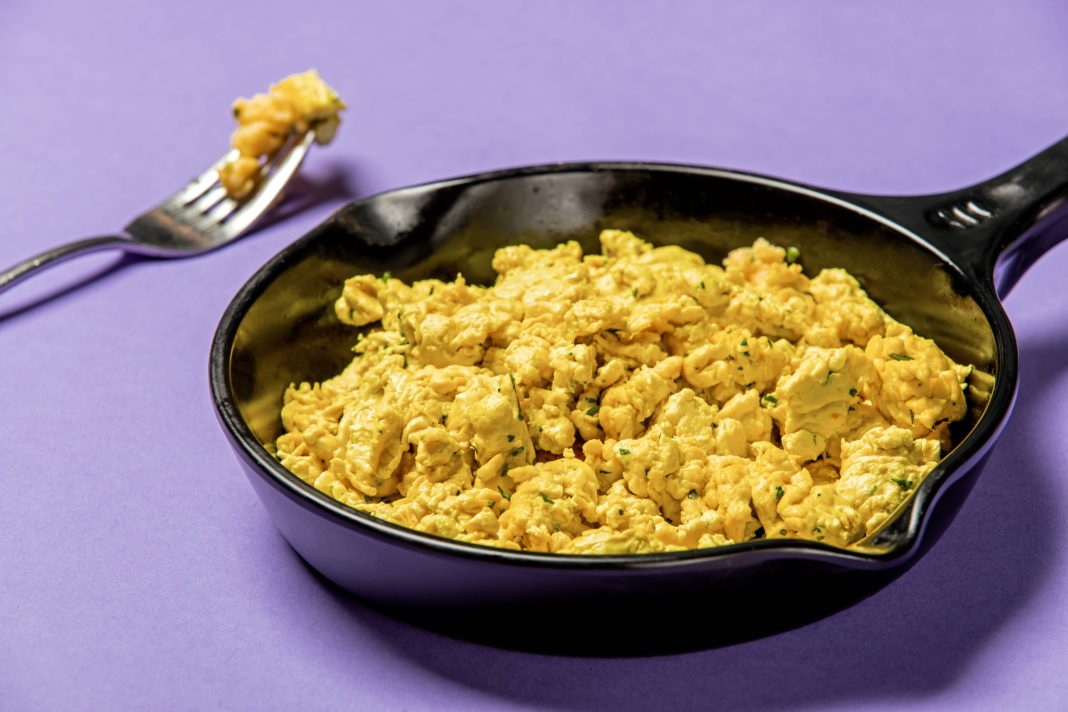 The co-founders of EVO Foods, Shraddha Bhansali and Kartik Dixit, are impact-focused entrepreneurs and passionate advocates for sustainability. They have created a vegan liquid egg that aims to deliver the same nutrients, taste, smell and texture as a regular egg, minus the cholesterol and fat.

“When we met, we both realised that while we were both on different paths, we had a very similar vision as to what we wanted to create in the future. Individually we were doing it, but our scale wasn’t as big as we had hoped. So we came together to create EVO Foods,” shares Bhansali. She owns and runs Candy and Green, a vegan and vegetarian restaurant in Mumbai, while Dixit has a background in cell-based proteins. “Our goal is to revolutionise the alternative protein industry in India, which is still very nascent.”

However, before creating plant-based meats they ventured into the vegan egg sector. Bhansali says that they picked eggs first because meat consumption is often barred in several religions, and people don’t look for alternatives to it. Eggs, however, lie in a grey zone with a higher cultural acceptance. “There are a lot of terms for different categories of eating habits.” There are vegetarians who eat eggs, there are some that eat them just at home, while some are ‘hidden-vegetarians’ who consume eggs and meat outside their homes.

“We took a deep dive into the psychology of why this is happening to realise that Indians customers fundamentally do not treat eggs as offensive to vegetarians as [they do] meat.” This prompted EVO to create a product for the Indian audience to deliver clean-protein in a way they have been consuming for decades. 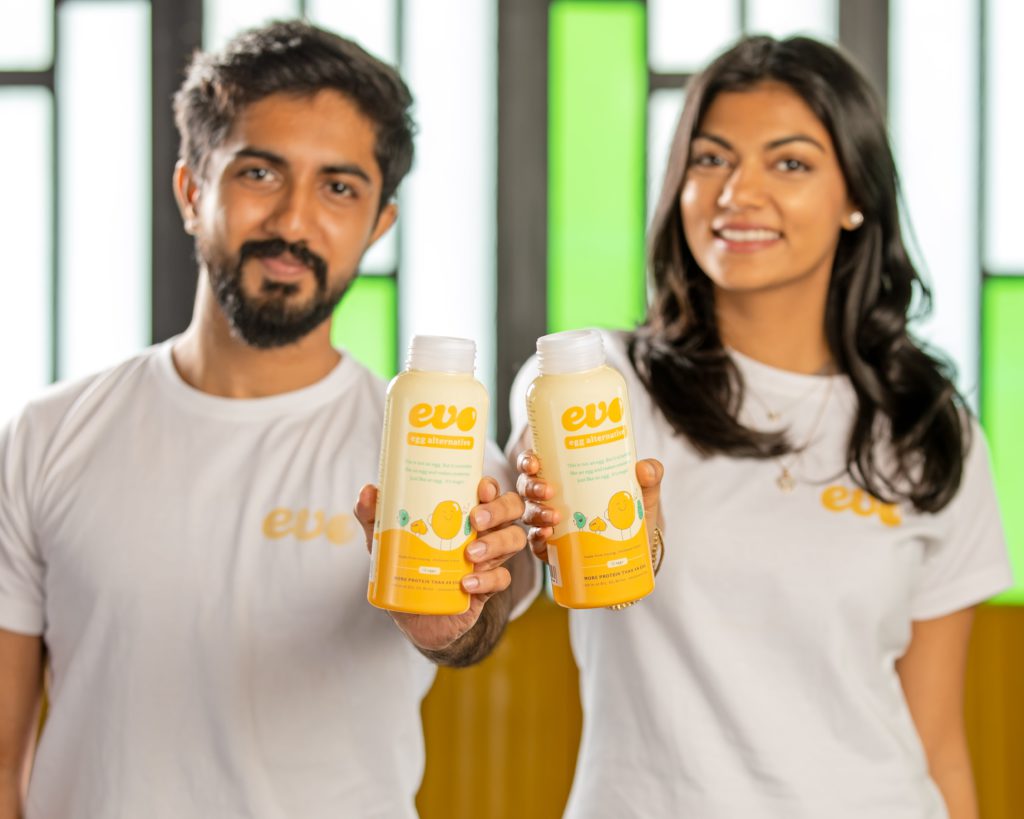 She explains EVO’s philosophy behind the vegan liquid eggs: “Our goal was never to change what people were craving, but to change where they got it from. If you want an egg, you want an egg. And I want to give you an egg, but I’d rather you get the one made from plants than chicken.”

Interestingly, the clean-protein company does not conform to labels such as plant-based or vegan. “EVO is for everyone.” Bhansali states. “While Kartik and I are vegans personally, we made this product for everybody and not for a certain type of person. Our target market is people who want to do better in life. They might not necessarily only be vegans and vegetarians. To make a real impact, you have to change the way people are eating eggs.”

Check out our review of Crackd, the UK’s first vegan liquid egg.

The company advertises the product as a fluffy, delicious egg made from plants. The liquid egg is made from indigenous ingredients like mung beans and provides the same protein content as a real egg, with reduced fat and zero cholesterol. Further, EVO has managed to add minerals like vitamin D to amp up the nutritional benefits.

Suitable for omelettes, wraps, rolls and scrambled eggs, the product has been in research and development for about a year and a half now. After lots of testing, reiteration, and going back to the drawing board, Bhansali shares that EVO’s liquid eggs make omelettes much fluffier than chicken’s eggs. 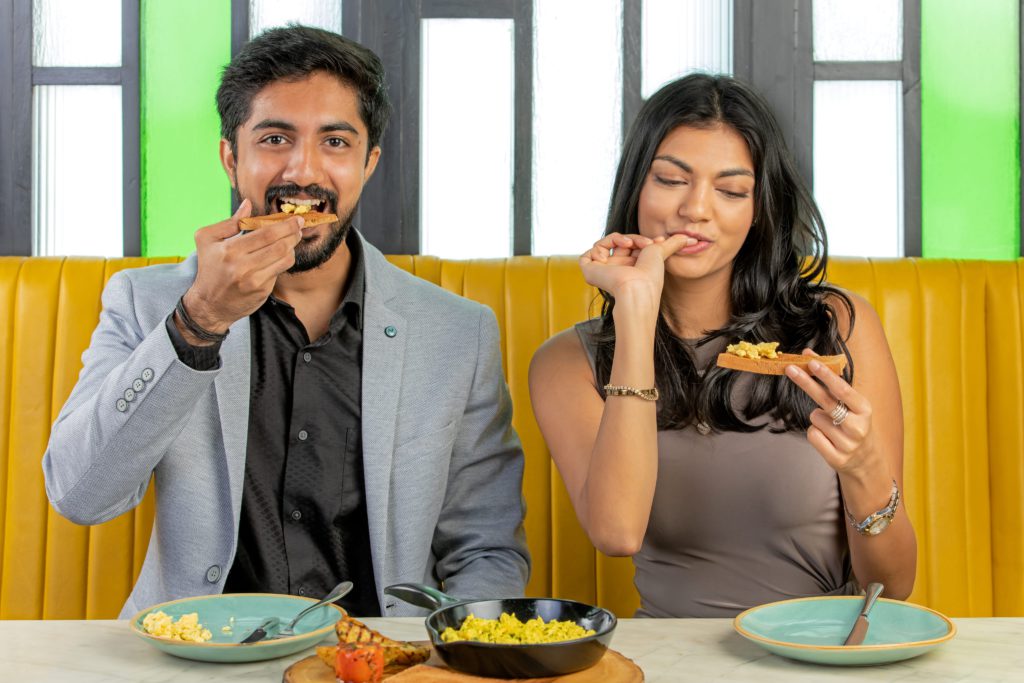 She says, while testing the parameters, they were not only comparing the taste, smell and texture — for which they have achieved a grade likeness to an actual egg — but the whole cooking experience. “Is it indistinguishable from an actual egg or can you tell? Is the bite the same? Is the fluffiness the same? Does it have the same gelation?” Her background in hospitality has given her access to some great chefs and taste palettes, which have been fundamental to this process.

The product is set to launch this month. EVO plans to introduce the vegan liquid eggs in restaurants across cities first, as it feels the acceptance for a plant-based egg would be higher there. In the next six months, it would make the product directly available to consumers on their website. It also plans to penetrate the US market this year, as per FoodNavigator.

While the idea is to revolutionise the animal protein industry in the longer run, EVO will focus on eggs for the next three years as the startup takes off. “EVO’s mission and vision for the future is to end animal agriculture by removing animals from the food chain. To do this, we will create products that are better than their animal counterparts.”

Muskaan Gupta
Muskaan is a history undergraduate at Lady Shri Ram College, New Delhi. Having grown up in different cities in India, she is passionate about food and culture. When she's not experimenting in the kitchen, you can find her invested in films and music. She is always looking for new things to do, is interested in studying food history and juggles between her love for filmmaking, writing and knowing the quirks of the world.
Previous articleWhy veganism can be associated with classism
Next articleAre Holocaust comparisons doing more harm than good to veganism?