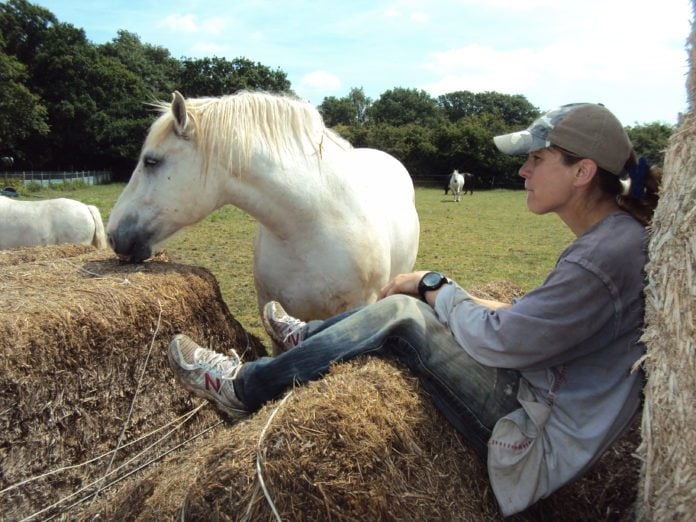 Marathon des Sables has been postponed until September because of Covid-19, but vegan ultra-runner Fiona Oakes smashed the distance anyway.

Between the 5th to the 11th April, Fiona ran 250km whilst still performing all her daily tasks at her animal sanctuary, Tower Hill Stables.  On the final day, she ran the last 15km (the ‘charity stage’) encompassing all the six sanctuary sites in a massive effort to show the world who she was raising money for: her animals, affectionately known as the gang.

The Vegan Review caught up with Fiona to ask her a few questions about being a vegan ultra-runner and her commitment to taking on this massive distance.

An interview with a vegan legend

What is your biggest strength as a vegan ultra-runner?

My biggest strength as a person who is definitely a vegan but reluctant to call themselves an athlete is the reason I am out there running at all – to try and help animals. My running is about advocacy, not athleticism – it’s just me being active for the animals or an animal activist, whichever way you decide to look at it.

I always say to people I have very little physical ability – in fact, I have a physically disability with my chronic knee condition – but I have great mental strength because I know every step I take I might just be encouraging another human to follow my vegan path in life.  I always feel proud to put on the Green and Black of my Vegan Runner Vest. I think it motivates me to try that bit harder as I simply don’t want to let the animals down by not delivering my best performance on their behalf.

Running the distance in the UK must have felt like an entirely different event. Will you be able to bank these miles as extra training come September?

The bizarre thing is that, as the week went on, it didn’t feel that different.  The first thing is that on the first day, we heard from the MdS that the weather in the Sahara was awful – wind and rain – but here it was glorious, sunshine the whole week.  I wore my actual Desert clothes and pack and didn’t feel at all cold. 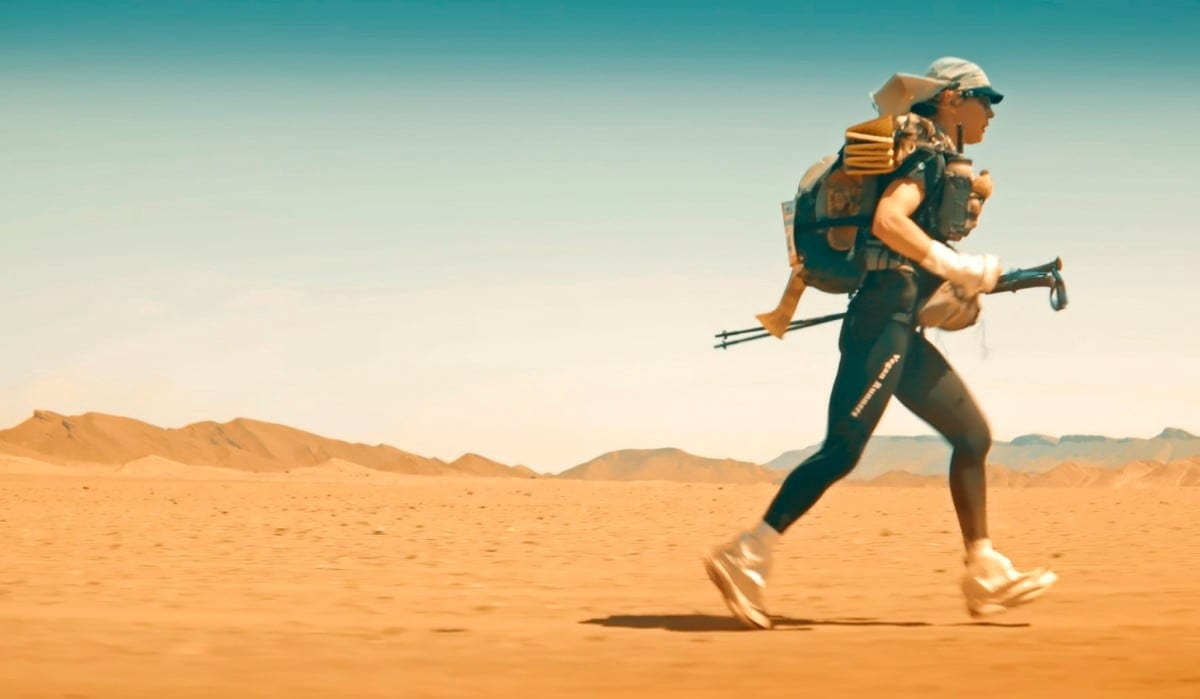 The second thing which was similar was the solitude and peace and quiet.  Normally when I run, whether on road or off to a certain extent, there are always people and cars around but with this lockdown there was practically nothing.  It gave me time for what I truly appreciate Marathon des Sables for – the opportunity to have peaceful thought.  Another similarity was the eerie silence of the skies, sea, tracks, and roads and, as a result of this, the wildlife I was lucky enough to see and hear.  I even came across a snake – an Adder on the Sea Wall but thankfully I didn’t need to get my venom pump out!

The distance was tough as I consider myself more of a Marathon runner than a vegan ultra-runner, so cramming this in with all the animal jobs was always going to be a challenge.

I think motivation was easier in the real race as you simply have to do it and there is no-where else to go and nowhere to hide.  Forcing yourself to go out and run these distances when you do have options is another matter but luckily, self-motivation has never been a real issue to me so I was just able to get on and do it.

I knew it was getting the event out of my system as I had been focusing on that distance, that week for months before so I was almost programmed to do it already.  Because of my knee injury I can’t descend very well so I can never run my best in rough terrain like the Desert.  I find the ultra-stage races do give me something more than physical endurance, they bring mental enhancement.  I always tell people when I speak of veganism that we are all animals – whether human or non-human – and we need the same things when it comes to what is important.  Food, water, shelter, freedom, no fear and our health.

Marathon des Sables teaches you this in abundance if you are a willing student.

Marathon des Sables is dubbed as the toughest footrace on earth. Yet you have completed it multiple times. What makes you return to this particular race?

It’s all of the above and the challenge of being able to do it and the desire to push myself to my limits in the hope that I can bring some of the endurance, stamina, strength and discipline back home and incorporate it into my everyday life.

It is a very great leveller to be cast into the desert, on foot, carrying all your own supplies for the week and try to survive and come through it.  You go to dark places, learn how to come through them, how to adapt to the suffering and monotony and not relinquish your goals for anything.  It is a great way to learn more about yourself – someone once told me it was the ‘most dangerous but safe thing you can do’ in that it pushes you to your limits but there is always someone there to pick you up if you need it.

It’s a luxury so many don’t have and the biggest lesson the race can teach – how lucky you are to be even out there contemplating and competing in it.  For me, veganism means positivity, and this is a time – more than ever before – people need that in their lives.

Covid-19 has affected many of our lives and as we all know this pandemic could have been prevented if the world was vegan.  Do you think people will begin to learn from this mistake?

Honestly, I am not sure.  I certainly hope so but now I already see a resistance to embrace veganism as an alternative and viable lifestyle which would prevent future incidents occurring. People often forget that it is not just Wet Markets which cause this sort of virus – our own animal agriculture system does too. Swine Flu and Avian Flu are both strong examples.

But it’s not just the contagious aspect of eating meat and dairy, it’s the damage to personal health. Obesity could almost be described as a global pandemic and the facts have shown it has rendered people less capable of fighting this particular one.

I have always said the model from which we conduct our daily lives has to change in order that our species can survive and thrive.  Adopting Veganism as the globally recognised dietary choice  is not the only solution but it is the most viable, easiest and most effective one to implement and gives us time to work on other issues such as fossil fuels, industry and our ethical approach to every aspect of our lives as well as the lives of each other – both non-human and human alike.

With the lockdown firmly in place here in the UK, many people have taken up running. Is there any advice you can offer to new runners?

Take it easy, be sensible and enjoy it.  Depending on where you run, now has never been a better time to start as the roads are clear.  Start with small distances and build up and don’t just think of your new running adventures as something to do because of this virus.  Don’t think of it as a chore or a substitute for something you think you would prefer to be doing.  See it as a new, life changing event in your life which could take you anywhere in the future.  You might even end up like me — as a vegan ultra-runner — and find yourself in the Sahara Desert or North Pole!

So, you finished the distance, encompassing all the sanctuary sites, and continued with all your daily duties. We must ask, how do you fit it all in?

I was creative with my time and worked out when I would be best placed to fit the blocks of running in.  Obviously, it didn’t take me as long as it does in 50+ degree heat in the Saharan terrain.  I did three 35(ish) km stages which took me between 3 and 4 hours, one 42 km stage which again, was round 4 hours, one shorter stage on the last day which I took really easy and toured round the Sanctuary sites with my camera to film them for anyone interested (which can be found on my Facebook account.) 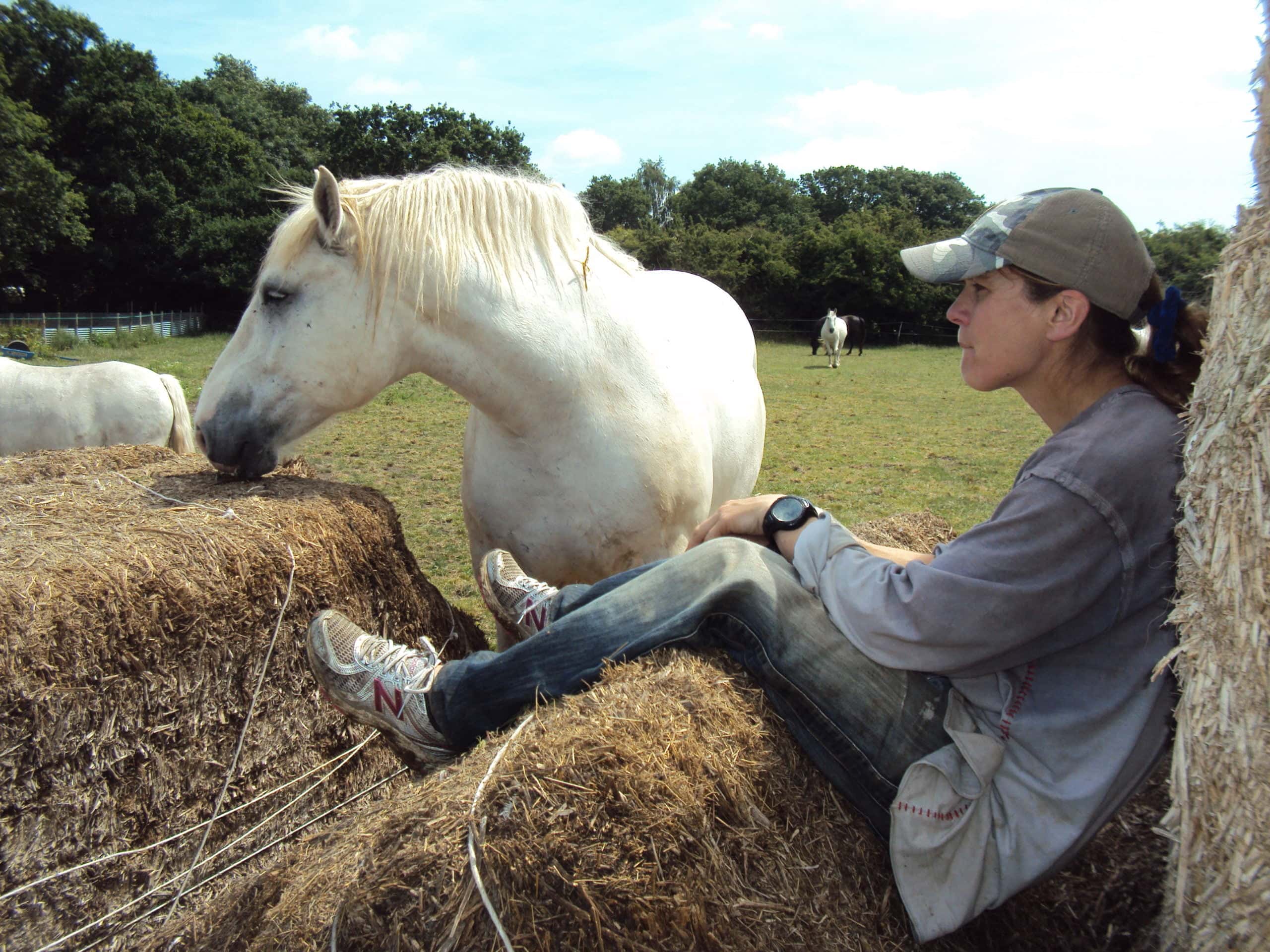 The challenge was the long stage of 86km which I knew I didn’t have time to fit in all in one hit so I went out at just gone midnight and ran 50km, came back to the Sanctuary and did the jobs and went back out and finished the last 36km in the early afternoon and again, came home and did the animal jobs.  It is not too bad, I am accustomed to hard work and, as the week progressed, I began to feel stronger and more ready to run, just like in the actual race.

Honestly, it was quite exciting in a strange sort of a way.  I think seeing the images of people on TV being so desperate to breathe and me being out there being able to do something so challenging whilst breathing the fresh, clean air so deeply put me in no position to complain!

Thank you for taking the time to talk to us Fiona. We applaud your commitment to the animals. And I wanted to end by asking you, what is the best way in which people can support your efforts as a vegan ultra-runner and the sanctuary?

Support is more vital than ever right now that is for sure.  I am worried, not only by the current health crisis but the aftermath of it which is sure to be a recession where people have far less available money to give.

The Government has helped charities, but vegan animal sanctuaries have not been the top of their priorities!

People can support the Sanctuary via our website and the section entitled ‘Ways to Help’.  Some are not relevant right now because of the current movement restrictions but the fundraising and Amazon Wish list is still very much available and appreciated.

If you can’t support financially then sharing the Sanctuary and my running pages is always amazing as it generates interest from people who might not be aware of me and the work I do.

So there are loads of ways to help – even though we are limited at this time for personal contact, so just get in touch if you have any ideas or just want to chat – running, veganism, animals, always happy to help!

If you want to find out more about vegan ultra-runner Fiona Oakes and her work, then check out Keegan Kuhn’s film – Running for Good- which he made about her life and running the actual Marathon des Sables in 2017. It is available Amazon Prime Video.

Donation pages and ‘Ways to Help’ can be found through www.towerhillstables.com

Fiona can be found on Insta @oakes.fiona  and FB @fionaoakes or you can contact her at fiona@towerhillstables.com

Next up: a look at why more athletes are choosing a plant-based diet.