For natural beekeepers, it’s about guarding the bee, not the honey 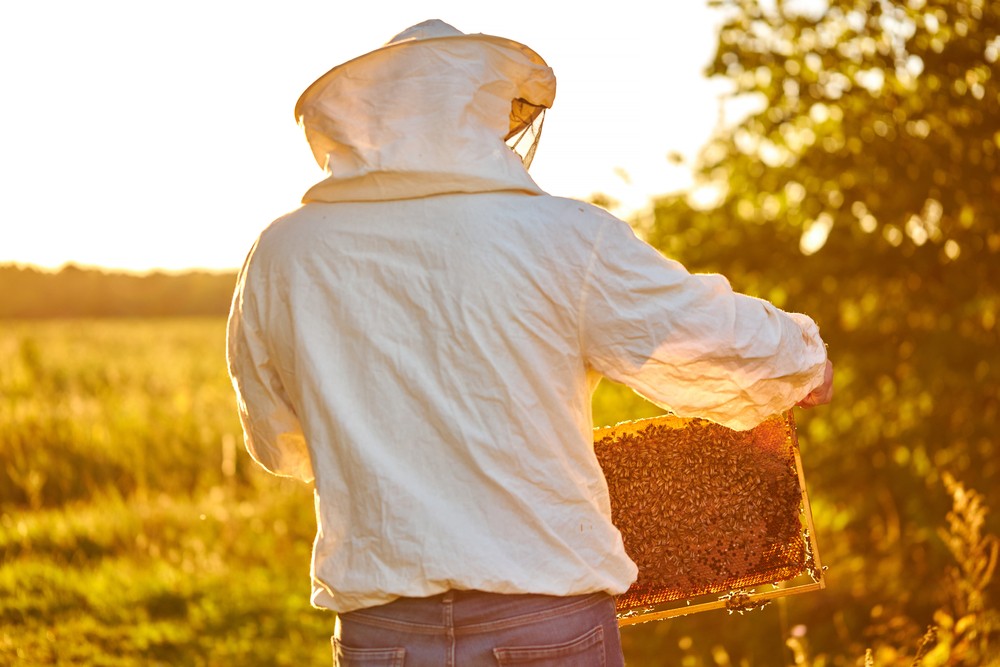 Not all beekeepers do it to collect honey; some do it to help bees thrive again. Not all heroes wear a cape; some actually wear a protective suit.

Jonathan Powell, a trustee at Natural Beekeeper Trust and a natural beekeeper himself, stands for hours just looking at a beehive. While for many, beekeeping is a way of animal farming, a natural beekeeper takes care of this fascinating pollinator. They can be called the bee’s guardians.

“If I put my hand on a hive, I am quickly captivated by their nature and the mysteries of the hive. There is a sense of purpose and balanced functioning that is far higher than our own,” explains Powell. “We can learn a lot from bees.”

The term “natural beekeeping” is ambiguous. It can refer to those who avoid invasive techniques found in intensive bee farming, like cutting the queen’s wings or transporting the colony hundreds of miles to those. But it could also simply mean providing bees with an appropriate place for nesting. Powell summarises: “There isn’t a clear definition for natural beekeeping. However, the term expresses a desire to provide an environment that is closer to the natural biology of the honey bee.”

Bees are literally everywhere — except perhaps the Antarctic. They have adapted to all ecosystems on Earth, and they play a vital role in the ecosystem cycle. There are around 20,000 different species, and it is thought they are responsible for one-third of the global pollination. It means, without bees, humans would struggle to cope with the food demand. Sadly, science warns of a fast decline in insect populations, bees among them.

Despite how difficult it is to study insects’ populations comprehensively, honey bees are not listed as endangered. But habitat and biodiversity loss as well as climate change don’t forecast a bright future for them. Many initiatives and organisations promote efforts to look after them. However, some bees aren’t considered of commercial interest because they don’t produce honey, and they are, indeed, on the Red List.

Read more about the role of bees in our interview with vegan honey maker MeliBio. 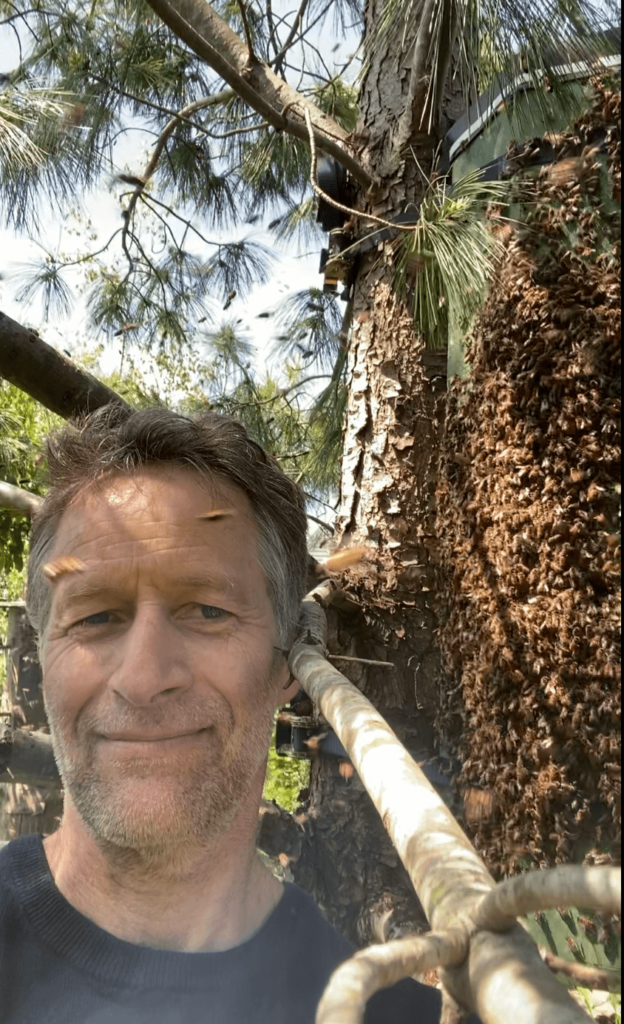 In the strict sense of the word, the natural beekeeper doesn’t actually do anything apart from helping bees nest. It could be as easy as hollowing out a tree to attract bees. Things might get a bit complicated when there isn’t a tree or an extensive garden.

Matt Somerville is an artisanal bee nest maker. He tries to mimic how the bees live in the wild. He made it out of trunks with thick walls to provide thermal isolation and straw hackles to avoid rain and provide shadow. His high logs are suitable for bees to begin a hive on. “People can stand just next to the hive and watch them,” he says. “That seems to be the most rewarding thing people love doing, almost meditating beside the hive.”

It just attracts bees to a new and quite fancy home, so he admits that it’s necessary to have suitable land for it, especially in terms of size and neighbours. At Pertwood Organic Farm in southwest England, some farmers and landowners set bee nests for assisting with their pollinating tasks. They have put up log hives or their equivalents on their land for bees to freely fly into and use.

The farm’s director, Wilfred Mole, says: “An important aspect here is the spacing of the hives. At Lower Pertwood Farm, which covers some 2600 acres, there is ample space for us to store log hives high up in the trees but at distances that provides each colony with ample space.”

In reference to their role, Mole explains that they use clovers for nitrogen-fixing, instead of artificial fertiliser, which does need pollinators. “We also like to grow lots of wildflowers, with the bees being one of the main pollinators creating the colour and beauty of Pertwood.” It is a natural way to help the farm as “wild bee populations are genetically much more robust than domestic bee colonies.” 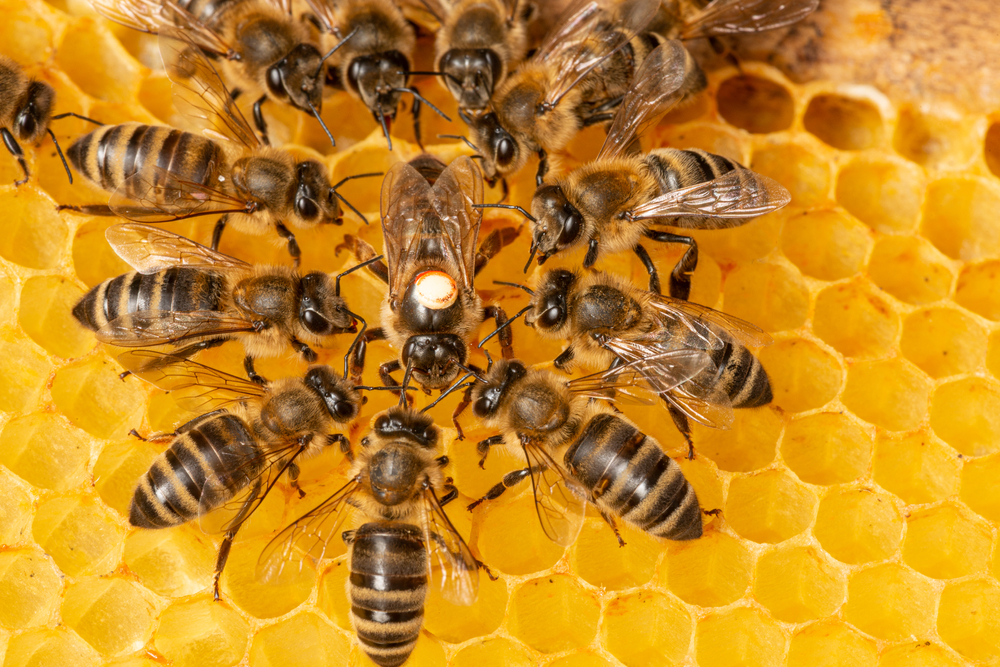 Bees have been on Earth much longer than humans, so they have learned how to use their natural features such as trunks or caves. They start the hive from the top in their natural environment, where the heat accumulates and going downwards. Conventional hives begin from the bottom, which is unnatural and forces bees to build cells upwards, filling them with extra honey. Instead, natural beekeepers provide a top bar, allowing bees to build combs downwards.

Bees cannot be fully understood individually, as they are part of something bigger known as a superorganism. The whole hive. Queen, scouts, workers, drones are the organs of this superorganism. When the hive feels it is too big, its emplacement is no longer suitable, or it needs to avoid diseases, it splits itself in a process called swarming. Wild bees know very well how to look after themselves.

One of the main drivers for beekeepers is harvesting honey, though it is definitely not a priority for the environment. Therefore, sometimes beekeepers don’t care enough about the bees’ wellbeing. (Other times, they do.) Insects, and all other pollinators, are like bees in their community; individually, they might not be so relevant, but they are crucial for their hive, which is the environment where we all live.

Juanele Villanueva
Juanele Villanueva is a freelance journalist passionated with Environment Affairs. He is originally from Spain and started to be interested in the Environment and sustainability when he was in his masters at the University of Salford. His goal is to share stories which change the general belief that being eco-friendly is just for wealthy people. Moreover, the vegan diet is the easiest step that everyone can do to reduce its environmental footprint. He is also interested in conservationism, recycling, renewable energies and environmental policies
Previous articleThe 2021 Met Gala is going vegan with the help of Bon Appétit’s Marcus Samuelsson
Next articleDairy farm cow emissions reach record levels in New Zealand