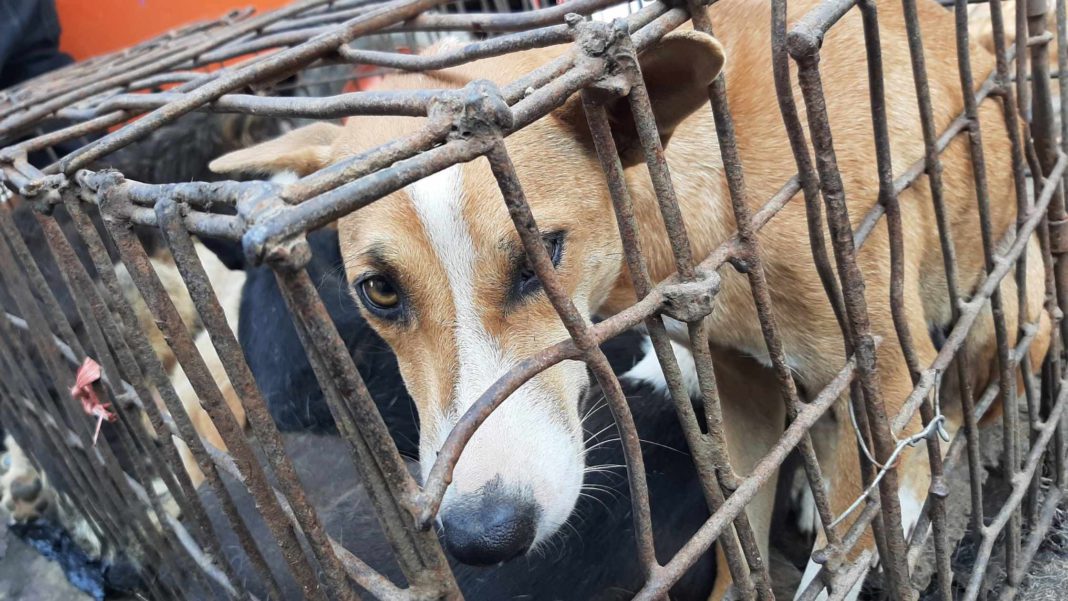 President Joko Widodo and other Indonesian local leaders are facing pressure to shut down the country’s dog meat industry following the release of a very upsetting new video by the Dog Meat Free Indonesia (DMFI) coalition. This video showed the true levels of animal cruelty as well as the risks to public health that are apparent within infamous wet markets on the island of Sulawesi.

At these wet markets, dog and cat meat is sold alongside other products such as bush-meat from animals including bats, snakes and wild boars; these venues strike a fierce similarity to markets found in Wuhan in China where it is believed the SARS virus originally came from. Tragically, as many as 1 million dogs are killed each year for meat. And whilst there has been an attempt to add controls within the trade in some parts of Indonesia, authorities on the island of Sulawesi which houses almost 20 million people, have, so far, failed to include adequate measures.

An investigation undertaken by the DMFI discovered criminal gangs and traders who steal at least 4,500 pets and stray dogs every month from various villages in South Sulawesi.

Amongst the videos taken, traffickers were seen hoisting terrified dogs by the neck and repeatedly hitting them across the face and heads. Other scenes at the market showed dogs in cages, huddled together amongst lifeless bodies of other dogs. These poor animals would be blowtorched to remove their fur in order to be sold to customers.

The meat is often sold to restaurants with some dogs trafficked from as far as the capital of South Sulawesi in Makassar which is a journey of 1,000 miles and around 40 hours.

Lola Webber, End Dog Meat Campaigns Director for Humane Society International, a DMFI member group, said: “This is some of the worst animal cruelty we have seen—gangs and traders stealing and bludgeoning thousands of terrified, screaming dogs every month from villages. Many of them are beloved family companions. They are torn away and abused by these criminals in broad daylight, scared and helpless. All of this to be sold for their meat in restaurants and at wet markets on display alongside bats, snakes and wild boar. Despite the serious public health risks associated with these markets, Sulawesi’s roughly 200 traditional markets are still operating business as usual. With Indonesia still in the grip of the COVID-19 pandemic, it is a matter of urgency that President Widodo takes action immediately to stop this dangerous and illegal trade.”

The DMFI investigator has not been named for his own protection, said: “The scale of the dog meat trade was really surprising. Thieves are stealing dogs from all over the island before selling them to the traders who warehouse them until they have enough to sell on. Mentally, this was a harrowing mission because every day I could see how utterly terrified and traumatized these poor dogs were. All around them they witness other dogs being dragged by the neck, beaten over the head, thrown around violently. They would tremble in fear when approached. Like me, the vast majority of Indonesians will be sickened by what I saw. This trade brings shame on Indonesia.”

The DMFI is a combination of organisations, all working towards the same goals. Jakarta Animal Aid Network and Animal Friends Jogja, as well as international groups Humane Society International, Four Paws and Animals Asia are requesting urgent meetings with city officials in Tomohon, Manado, Minahasa and Makassar to push for immediate action.

At present, the group of campaigners already work in colaboration with police and local governments within various other regions to ensure this barbaric trade is put to an end.

Recently, in November 2021, the DMFI worked alongside Sukoharjo police in Java against illegant dog slaughterhouses and as a result, more than 50 dogs were rescued.

There are in existence, eight national laws and regulations that are meant to serve to prohibit the dog meat trade. And so far, five regions have passed explicit bans, removing the dog meat trade from any legal practise.

In 2019, Karanganyar passed the ban and in 2021, Sukohrajo and Salatiga City followed suit. Semarang, which is part of the provincial capital of Central Java, passed the ban earlier this year.

DMFI is requesting other areas continue the trend to end the industry outright.

Facts about the dog meat trade

Despite the demand for dog meat being higher in Sulawesi than anywhere else in Indonesia, an opinion poll from 2021 by Nielsen showed that only 6% of Sulaesians eat dog meat. Alongside this, it is believed that only certain ethnic groups, such as the Minahasa of North Sulawesi, eat dog meat. In this location, there are 24 markets who collectively sell around 360 live and slaughtered dogs per day; this totals more than 130,000 dogs each year.

Despite these figures, it is noted that opposition to the dog and cat meat trade in increasing across Asia. There is an ever-growing number of countries and localities that are banning the industry as well as the sale and consumption of dogs in general.  It is this fact we hold onto whilst we look forward to more authorities taking positive steps in presenting the ban.

Alice Soule
Alice Soule is a Writer and Editor, and graduated with a BA in Social Policy. She is passionate about veganism and animal rights but equally has a love of sports, reading, and drinking tea. Alice is a perpetual dreamer and recently finished writing her first novel. As yet to be published...because she's already dreaming up the next story...
Previous articleIf you’re looking for the best luxury vegan clothing…look no further than Will’s
Next articlePlantForm set to accelerate plant-based companies across the globe