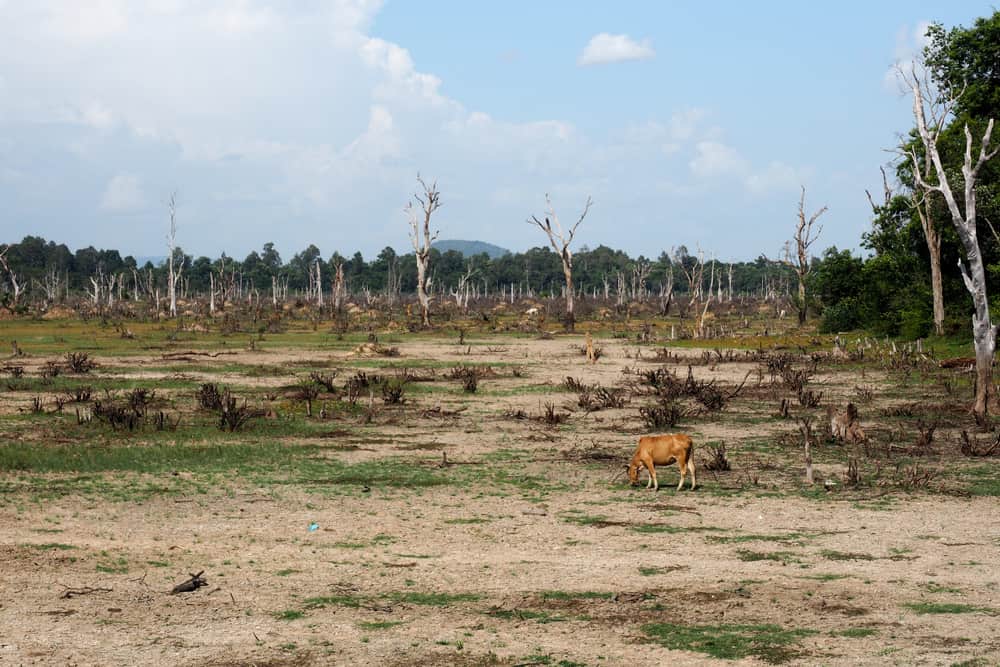 In an online summit, leaders gathered to discuss how forests can be protected, with the single most effective act being reducing animal consumption.

Interconnectivity in nature is well-known. We also already know of a type of incredible, cheap machines that are very effective against climate change: trees. Trees, forests, woodland, call it what you will. Last week’s Global Forest Summit aimed to push the public and private sectors to grow trees instead of chopping them down.

Here is one key highlight: don’t cut down trees. Indeed, a recent global survey carried out by the UN revealed that protecting forests and improving land management were the most desired actions mentioned by the public. However, the least favoured solution was transitioning to a plant-based diet. But agriculture is the main driver for deforestation worldwide and most of the crops grown are for feeding livestock.

Fran Price, global forest practice lead at WWF, said in the module Forest & Biodiversity: “Globally, food production has caused 75% of deforestation and conversion and 70% of biodiversity loss on land.

The summit was organised by ReforestAction and Open Diplomacy, under the high patronage of French president Emmanuel Macron. It was an all-day-long event that approached the topic from different perspectives. Moreover, it had an exceptional panel of speakers from public organisations, governments and diplomatic bodies like the UN and the Intergovernmental Panel on Climate Change, as well as spokespersons for commercial brands like Proctor & Gamble.

🗣️We want to be part of the solution. There’s a role we can make as we touch 5 billion people every day with @ProcterGamble. We drive different projects to protect our #biodiversity.@virginiehelias #forests

From 2007 to 2017, a net 43 million hectares of land was deforested. That is roughly the size of Marocco. Furthermore, 52% was concentrated in four areas: Latin America, sub-Saharan Africa, Southeast Asia and Oceania.

Despite the commitment and protection that governments promise, that trend is growing. Besides food-related reasons, there is infrastructure construction like roads, urban expansion or natural fires, which often leads to deforestation.

Aside from the complexity of the problem, it’s obvious we need to make a transformational change in the way food is produced and consumed. However, it is necessary to tailor solutions locally, protecting natural habitats, improving land management and soil health, and restoring degraded areas.

Thomas Friang, founder and CEO of the Open Democracy Institute, reminds that forests are not just a way of offsetting carbon emissions. “Restoration and reforestation comes after the conservation of nature,” he says. “Let’s protect them faster, let’s restore them stronger.”

Nonetheless, for Greenpeace France, this event, organised by a company that promotes offsetting through tree planting and with the backup of governments, is an example of greenwashing.

Cécile Leuba, forest campaigner at Greenpeace France, claims: “Instead of appearing in international forums alongside actors promoting false solutions that are actually dangerous and ineffective for the climate, the government [of France] should instead focus on putting implementing the national strategy to combat imported deforestation that was published two years ago and has remained a dead letter ever since.

“There is an urgent need for the government to adopt nationally binding measures to ensure that our imports of raw materials, especially soybeans, are not linked to deforestation.”

For Price, on the other hand, businesses must work to eliminate deforestation and conversion from their supply chains. Subsidies must be repurposed to incentivise nature-positive production, rewarding those who protect habitats, implementing good practices, encouraging biodiversity, and rewilding unproductive lands suitable for restoration.

“Dietary shifts are also required, with a global move towards diets consisting of a larger proportion of plant-based foods, relative to animal-sourced foods, to minimise the amount of land used to grow feed for animals and sustainably increase the amount of calories produced from existing farmland,” she said at the Global Forest Summit.

“Lastly, we must tackle food loss and waste — one-third of all food produced is never consumed and is either lost in the supply chain or simply thrown away.”

Meanwhile, many voices rice asking for a more sustainable way of living.

Juanele Villanueva
Juanele Villanueva is a freelance journalist passionated with Environment Affairs. He is originally from Spain and started to be interested in the Environment and sustainability when he was in his masters at the University of Salford. His goal is to share stories which change the general belief that being eco-friendly is just for wealthy people. Moreover, the vegan diet is the easiest step that everyone can do to reduce its environmental footprint. He is also interested in conservationism, recycling, renewable energies and environmental policies
Previous articleAustralia’s plant-based protein sales double in a year
Next articleAnimals First on the Second is ‘helping introverts find a voice’