Known for its scenic beaches, colonial architecture and all-round holiday atmosphere, India’s tourist gem Goa is currently caught in a battle for survival against a major industry.

Nestled in the Western Ghat region of India – one of the eight hottest biodiversity spots in the world – the pristine green forests of the Mollem National Park and the Bhagwan Mahaveer Wildlife Sanctuary in Goa stand to lose 170 hectares of their protected land to three upcoming development projects. And along with it, a significant chunk of the biodiversity of the Ghats.

The projects include the four-laning of a national highway, double-tracking of a railway line and the laying of a 400kV transmission line. The objective of these projects is to create the infrastructure for a coal transportation corridor cutting across the state, say environmentalists.

While the local fight against these large scale infrastructure projects began earlier this year, the severity of the issue is slowly gaining prominence worldwide in mainstream media owing to social media efforts to raise awareness about the subject. At the forefront of the movement are students and activists who are taking to the streets and holding the government accountable for their actions. Mollem Memory Project is a call for action directed towards all students to raise their voices in solidarity to protect the Mollem National Park and Bhagwan Mahaveer Wildlife Sanctuary.

Gabriella D’Cruz, an Indian marine conservationist with a Masters in biodiversity conservation and management from the University of Oxford, tells me of the larger implications of the projects: “Essentially, if coal infrastructure or any infrastructure moves through a protected area, it fragments the area. What we have here are three linear intrusions. What that does is bifurcate one area into three.”

This bifurcation, she goes on to explain, will make it really hard for animals to navigate, and allow various types of erosion to take place and invasive species to come in. “These fragments are almost like cuts between the sanctuary and damages the continuity of the ecosystem. In terms of the transmission of coal or other carcinogenic substances, it is not only detrimental to animals but also people who move through the area, she adds.

According to the state’s Tourism Development Corporation website, the forest cover of the protected Mollem region is so dense that sunlight does not even reach the forest floor in many places. The area is also known for the number of freshwater streams crisscrossing the geographical landscape of the two villages — outnumbering the houses. The endemic species found there also surpasses the human population of around 4,000.

Yet, when the proposals for the projects were laid out, only one member of the Goa State Wildlife Board raised objections to permissions granted to the projects, stating that the environmental assessment had not truly reflected the impact on biodiversity. “These forests of Western Ghats are older than the Himalayas. But when assessing their value during environment assessment, forest officials are only seen enumerating trees. What about the reptiles and so many other species, most of them endemic to the area?” says Mollem resident and botanist Swasha Khandeparkar. 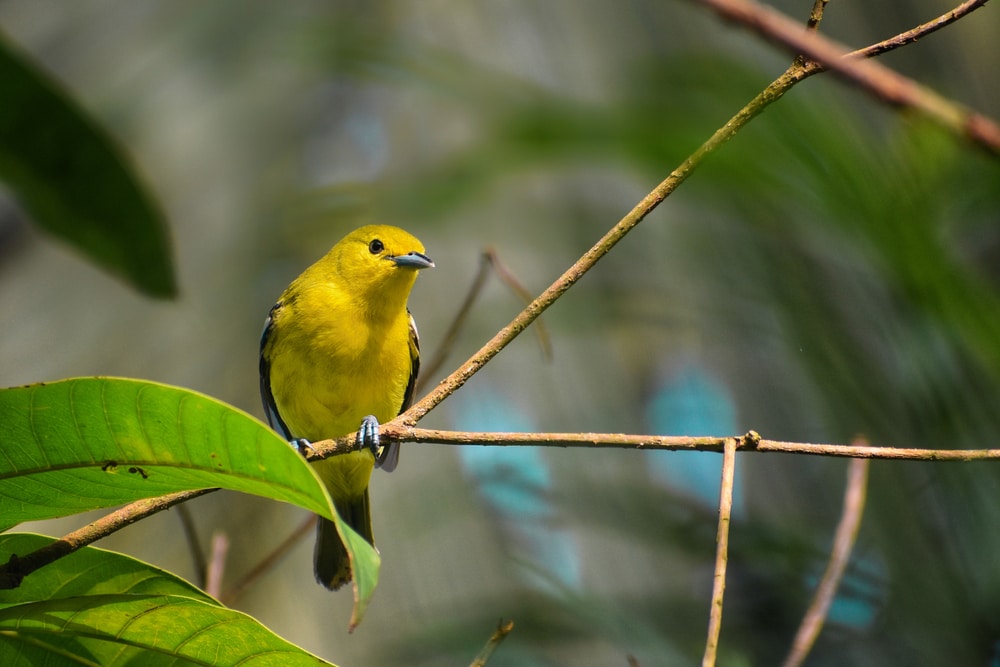 Shivani Naik, a member of the Mollem Memory Project, also notes: “The fragmentation of habitats, deforestation, and dredging of rivers will cause immense flooding in the proximate areas. The corals, nesting grounds of birds and fishes, mangroves and aquatic life will be disrupted. The rivers are threatened and so is our source of water. Try imagining Goa without nuste [fish]. You just can’t.”

Over the next few months, Mollem’s protected area itself will imminently lose over 20,000 trees including indigenous species such as Terminalia elliptica (the state tree of Goa), Terminalia paniculata, jambul, Terminalia billerica, and Terminalia chebula.

The area also has a significant number of Indian Gaur — Goa’s state animal — and the flame-throated Yellow Bulbul — the state bird. So, it came as no surprise when close to 400 scientists, conservationists, academicians, artists and architects, among others, made their concerns known to the Union environment ministry over the past few months.

Apart from the gruesome threat to biodiversity, locals are also concerned about the effects on the ecosystem and environment of the Mollem National Park. A forest-dwelling community of cowherds, known as dhangars locally, has played a significant part in preserving this ecosystem, says Khandeparkar. But the community now fears that access to the streams, which provide safe drinking water to their cattle, will be cut off for them, with the power transmission substation coming in proximity to their settlement.

The substation is coming up in a non-protected forest area, but equally dense. The transmission line will come from Dharwad into Goa to meet the state’s future power requirement, projected at 1,192kV by 2022. The freshwater streams in Mollem and Collem feed the rivers that provide water to the Opa water treatment plant, which meets the drinking water needs of half of Goa’s population. The forests are also home to the famed three-tiered milky cascade, the Dudhsagar waterfalls.

“I’m a resident of Mollem,” says Shruthi Naik, 22, of the Mollem Memory Project. “I’m used to seeing Mollem green, pure and peaceful. Over the years, we residents have developed an emotional connection with this environment. Seeing it getting destroyed is heartbreaking. These projects are not only going to affect nature but also the livelihoods of the people who depend on it.”

For several Collem locals, the visitors to the falls from October to March are a source of their livelihood. If the forest is tampered with, the flow of the water may eventually reduce, and this will affect livelihoods. “Under the guise of the pandemic, we were permitted by the authorities to operate the jeeps to take tourists to the falls only recently. We fear, if we raise our voice, we may be left without an income today, rather than tomorrow,” says another Collem resident. Not to mention the high risk of air pollution that will be caused by coal particles in the air left during transmission.

A medical student and supporter of the movement Mithila Prabhudesai also highlights the health risks at play: “One must understand that with deforestation, animals will move into human civilisation and humans into forests, which will increase their interaction and thus causing an easy passage for transmission of pathogens — thus causing an increase zoonotic diseases. Also, the inhalation of coal dust has a lot of clinical manifestations.”

D’Cruz also tells me about civil society’s main opposition with regard to these projects. “The main critique against the infrastructure is that they are not beneficial to the protected area at all. In fact, they were passed during lockdown, no due diligence was done and no proper procedure was used,” she says. The national and state wildlife board was not given enough time to critique these projects and the Environment Impact Assessments were faulty and non-transparent. A supreme court order was also violated when over 2,700 trees were cut down in order to pursue the transmission line.

The right way to go about the procedure, remarks D’Cruz, would have been a cumulative impact assessment of the damage that would be caused by all three projects together. The way forward is for the projects to be revoked until procedural changes are made and can only be carried forward if the public sees fit.

Since the public dissent began, the Goa Tamnar Transmission Project Ltd (GTTPL) has in its statements tried to downplay the impact of these development projects on the ecology, claiming only 1,000 trees will be felled in the wildlife sanctuary. The government has been trying its best to defend the move in the name of public interest. Goa’s environment minister Nilesh Cabral has said that the double-lining of railways will help trains pass through the Western Ghats swiftly. He has also argued that trains travel through the region at 40kph, burning more fossil fuel than necessary.

“It’s important to note here that the part of The Wild Life (Protection) Act 1972 that directly affects Bhagwan Mahaveer Sanctuary and Mollem National Park are Section 29 and Section 35 (6). It says that no destruction whatsoever can be made to the land and waterways of any wildlife sanctuary/national park unless it is for the improvement and better management of the wildlife therein. Thus, we request the government to stop feigning ignorance and pay heed to the dissent from the social activists and the public,” says Vishal Kaliwal, of the Mollem Memory Project.

In addition, objections raised in the Environment Impact Assessment reports for the projects have been overlooked on the basis of “mitigation measures” suggested by the Chief Wildlife Warden.

Several other corporations have been linked to the issue, including the Adani Group, Jindals and Vedanta. While the government has made airy claims of its attempts at “sustainable development”, another member of the Mollem Memory Project, Saieshya Salgaoncar, states: “Development has to improve the standard of life of the people. In the name of development, the authorities should not sabotage their state’s environment, heritage and the lives of the people in Goa.”

On the night of November 8, 2020, nearly 3,000 Goans bearing torches, lanterns and candles descended on the historic village of Chandor — one of the medieval capitals of Goa and neighbouring territories — to sing, dance, beat drums and raise slogans against the government for allowing the expansion of a railway line through protected areas to increase Goa’s coal-carrying capacity.

The arresting visual of the protests garnered nationwide attention and support, with celebrities and other movements some from as far as Australia joining the cause with Goa’s twin movements — #SaveMollem and Goyant Kollso Naka (“We don’t want coal in Goa”).

Students and activists continue to beg for change as the Mollem National Park movement reaches a wider audience worldwide: “The clock is ticking. Act fast. Act now. Protect the environment; save the future,” they urge.

Read our story about The Conservation Project International.

Nadine Monteiro
Nadine is a Liberal Arts student at Leiden University at The Hague, with a passion for anthropology, sustainable development, and human rights. Dabbling in the fields of content creation and journalism led her to The Vegan Review where she explores her enthusiasm for health and nutrition. She is a strong advocate for body acceptance and Health and Every Size (HAES) and aims to bring more representation of body diversity into the mainstream. You're most likely to catch her either on a new travel adventure, knee-deep into an obscure podcast or attempting to make homemade nut butters - there is no in-between.
Previous articleWorld Vegan Month: Being plant-based in South Africa
Next articleWorld Vegan Month: Being plant-based in Nigeria