Greece opens up its first ever all-vegan hotel 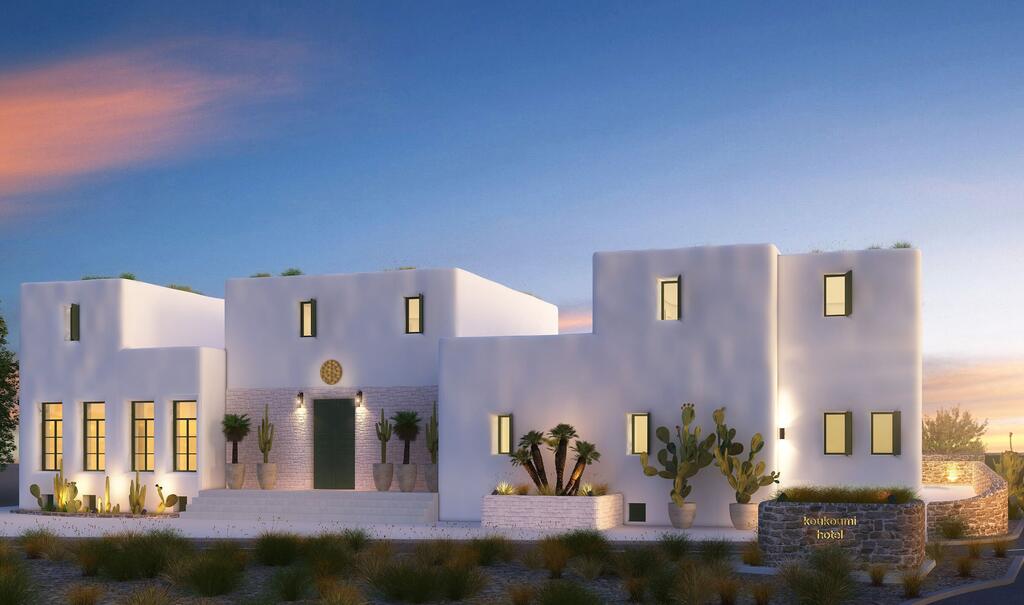 Greece has announced plans to open its first all-vegan hotel and the world has rejoiced. It’ has also come at a great time: “Veganism is one of the fastest-growing lifestyle movements in the world, so it’s no surprise that fully vegan hotels are appearing to accommodate the ever-increasing number of vegans worldwide,” Matt Turner, spokesperson for the Vegan Society.

Greece opens up its first all-vegan hotel. Located on the island of Mykonos in Ano Mera, Mykonos, Koukoumi hotel plans to open its doors this summer. The hotel has been designed to fit within traditional Myconian architecture and has 14 suites in total. The founders’ philosophy prioritizes sustainability on every front, with a vegan menu, eco-friendly mattresses, solar-powered water heaters, and even a magnesium pool. Spa therapists also provide vegan beauty treatments and daily group exercise classes take place in the fitness center to encourage a healthy lifestyle.

Everything about the all-vegan hotel is plant-based from the spa to the Mediterranean menu. Koukoumi will offer two bespoke packages, the ‘Detox package’ and the ‘Energy Boost’ package which are both full-board stays spread over five days
Founder of Koukoumi, Georgia Kontiza, had this to say Living off her belief that we should “enjoy life without harming animals, the environment, or ourselves.” It’s an alternative and peaceful place she says, for visitors from all around the world to come and seek refuge.

Koukoumi has a cuisine that is Greek-inspired and is made up of exclusively vegan and plant-based raw food. For breakfast, the bread and cakes are baked in house and daily meals include soups, salads, fresh pasta, vegan burgers, pizzas, and poke bowls. All vegan so it’s not a place for meat and dairy lovers. Don’t expect to meet any ribeye steak for dinner.

There were 11,655 vegan food and drink businesses launched in Europe in 2019, an increase of 93 percent from 2016, according to The Vegan Society. Germany is now among global leaders when it comes to vegan product development. Berlin has been called “the most vegan-friendly city in the world” boasting around 600 veggie restaurants around the capital. An all-vegan hotel is a significant addition to the roster.

From McDonald’s and Greggs in the UK to Michelin star dining in Europe, more and more restaurants are opting to include vegan and vegetarian meals. Some educational establishments such as the University of Cambridge are even removing all beef and lamb from their menus altogether, in favor of plant-based options. Pioneering chefs like Pietro Leemann in Milan and Alain Passard are leading the way to a plant-based future, by inspiring meat-eating diners to go for vegan options simply based on quality and taste.

According to one industry-led article in January of this year, the two trends set to shape hospitality and catering in 2020 are sustainability and veganism. Having vegan options on the menu has even been described by some as a “moral responsibility”.

A study was undertaken at Harvard University in the US found that a vegan diet can benefit both health and the environment. By avoiding dairy, meat, and fish, and instead focusing your diet around vegetables, fruits, nuts, seeds, and whole grains, we may live longer as a result and have a lower risk of developing heart disease or type 2 diabetes.

Damoy Robertson
Damoy Robertson is an entrepreneur and founder of The Vegan Review. Damoy is dedicated to spreading veganism to the masses which he believes will enable people to make better, more informed decisions concerning the way we all interact with animals and our planet.
Previous articleEco startup launches refillable cleaning products
Next articleSmitten Ice Cream Launches Diary-Identical Vegan Ice Cream