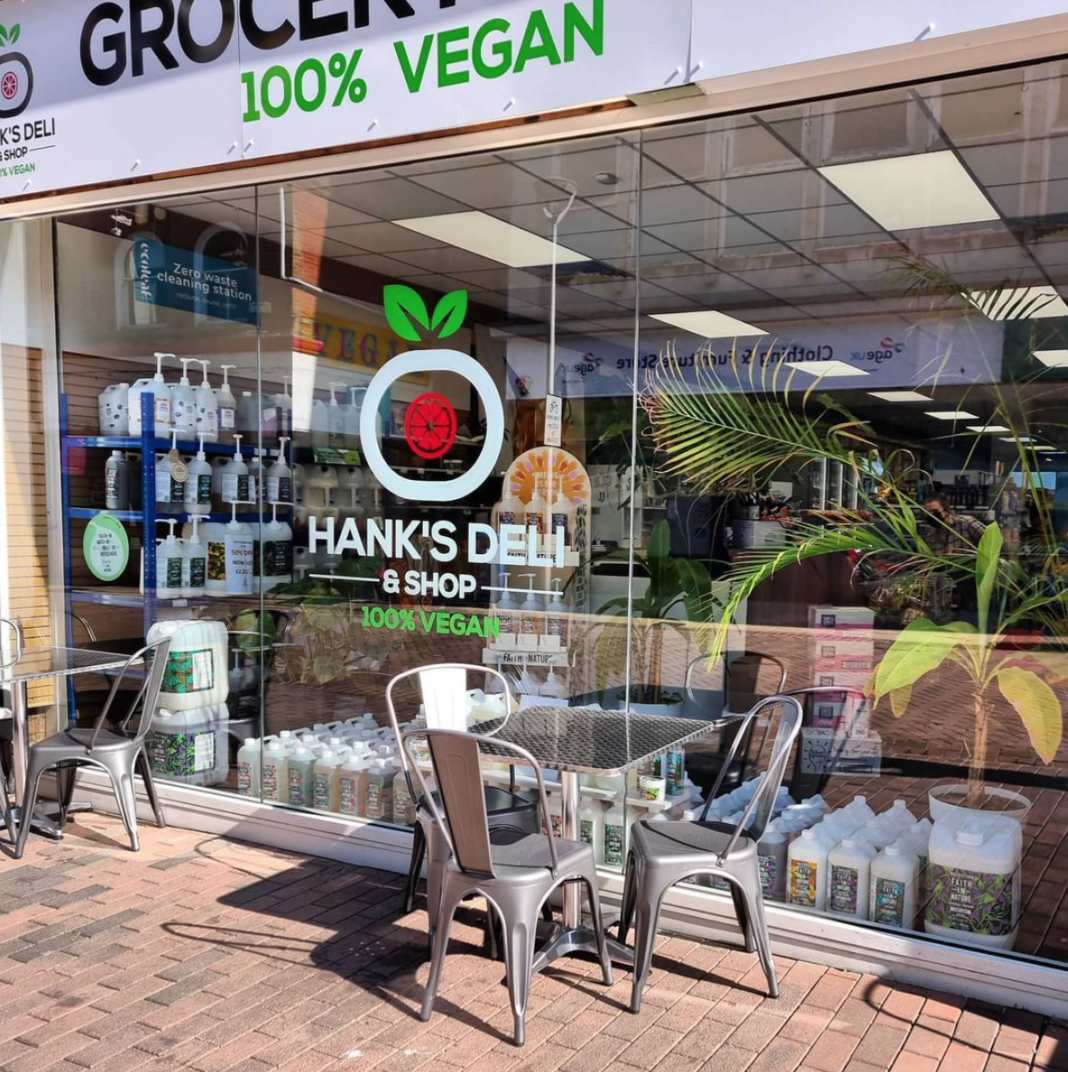 A county steeped in agricultural history has had a plant-based shakeup with its first vegan deli, supermarket, takeaway service and fully vegan pub opening in Ipswich.

There are many places across the UK known for their involvement with farming animals. East Anglia is one of them. Agriculture is a big business in Suffolk, with farmers and growers playing a significant role as part of the east of England’s £8 billion food and farming industry.

Suffolk also has a deep tradition of pig farming, with about one-fifth of the UK’s pork originating from the county. Therefore, in a county with its roots in raising livestock, it is amazing to see an incredible vegan revolution going on in its town centre.

The successful plant-based progress has been down to Geoffrey Bligh and Phil Rivers — both vegans who are “passionate about sharing the accessibility, affordability and the deliciousness of vegan food”. Keen lovers of eating out, the successful owners of vegan food chain Hank’s believe that “dining out is an occasion” and “the experience should be special” every time.

The journey and evolution

Bligh’s and Rivers’s journey began with their online delivery business, followed by Hank’s Deli & Shop, which opened in July 2019. This was an incredible breakthrough, being the first fully vegan deli and shop opening in Ipswich town centre.

“The response to the deli has been incredible,” says Bligh. “We have a real mix of vegan and non-vegan customers — good food speaks for itself and the reviews have been amazing.”

After receiving incredible support from customers and the local community, they quickly relocated to a much larger premises and turned the first venue into a home for their takeaway food service, Hank’s Dirty.

The deli and café were proving to be so popular that the couple was struggling to keep up with the demand, so Bligh and Rivers set off on a groundbreaking new venture. In January 2020, they opened Suffolk’s first-ever completely vegan pub.

“Many days of the week, we have queues, people are struggling to get a table, and [they] are wanting us to do evenings,” Bligh explains. “We started doing Friday pop-ups to meet demand, but we knew we had to get bigger premises and were acutely aware that what’s missing in town is a vegan evening meal place, so a pub was a natural fit for us.”

He describes the moment he and Rivers viewed the property whilst hunting for the perfect venue: “It had been empty for a while and as soon as we walked in, we knew it was the right place for us.” The couple’s goal was to expand their offering while preserving the theme and ideas — the same customer service and accessible food, but in a pub environment.

The work ethos is evident when you visit a Hank’s venue. Bligh describes that they desire “to provide wonderful food, excellent service and make each of our customers feel like an old friend”.

In addition to the amazing customer service and vegan food available, every single drink on the pub menu is vegan too, with a range of soft drinks to complement the beers, ciders, wines and spirits, including Suffolk-made LA Brewery kombucha.

Aside from wanting to introduce delicious vegan food to a part of England that hasn’t seen much of the sort before, ethics play an important role in the Hank’s mission. “We try and use suppliers that follow our own ethics as well,” says Bligh.

“If we can, we buy from other vegan companies and try and support other small businesses, UK businesses or at least ones that we think are trying to improve our planet or minimise the impact they have upon it.”

From the wide range of ethical and cruelty-free vegan products available, Bligh and Rivers are always considering environmental and sustainability factors when it comes to the business.

“We are very conscious about our impact on our local community and the world at large. We think about these things before we think about profits,” Bligh says. “If we can source products from a local producer, we will and do.

“From baked goods to beers — some of our products are made down the road or across town. Of course, this isn’t always possible so we try and strike the balance of price, sustainability and availability to bring you a great experience at an affordable price.”

Unfortunately, it wasn’t long after the pub had opened its doors that the pandemic hit and Hank’s was forced to adapt its business: “We made the best out of a bad situation,” Bligh tells me.

During lockdown, the Hank’s team provided a grocery delivery service for people in Ipswich and further afield, with items including bread, frozen food, tinned goods, pasta, rice, fruits and vegetables, as well as household supplies and pet food.

Due to increasing demand, Hank’s Deli & Shop began offering national delivery following the growth of its online grocery business, and despite the setback of the lockdown, they continued to look at ways to grow their successful business. “We have been looking for a space for a second Hank’s Dirty for a while, but it was a matter of finding the right place,” explains Bligh.

In January, the couple announced they were opening their fourth venture and branching out to Felixstowe with their fast-food service. “The outside space at Beach Street will certainly be beneficial for the situation we find ourselves in now, but also after Covid passes, as, in the summer, it will be great for people to sit outside and enjoy our food,” says Bligh, adding that consumer response has been “incredible”.

Having grown four successful businesses in the space of a few years, in the face of adversity and midst of a global pandemic, nothing seems to faze this couple, who have successfully put vegan food on the menu in Suffolk.

Tina Newman
Tina Newman is a writer, makeup artist and qualified Animal Nursing Assistant living in Suffolk, UK. She is the author of the vegan children's book series Vivi the Supervegan and mother to two little supervegans of her own. Tina had been vegetarian for 21 years until she found out what happens in the dairy industry and in September 2017 she went vegan overnight. She has been a passionate animal rights activist spreading awareness and helping to educate others ever since.
Previous articleExploring the intersection of queer culture and veganism
Next articleThe straw that filters dirty water to make it safe for drinking