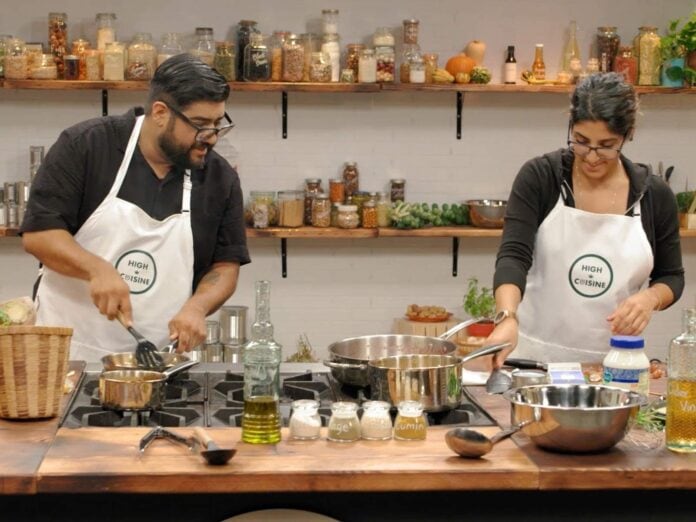 In each episode of High Cuisine, Amazon Prime Video’s new vegan cooking show, two Los Angeles-based professional chefs are presented with a cooking challenge. But this show takes ‘plant’-based to a whole other level. Not only do the meals have to be completely vegan, but at the beginning of the episode, the chefs must also get high on cannabis before tackling their cook.

The themes for each episode also diverge from traditional cook-offs. They range from challenges such as making sushi into dessert, baking a vegetable-flavoured cupcake or making enchiladas with fruit roll-up candy.

The Vegan Review reached out to the show’s executive producer, Asher Brown, to chat about creating the world’s first vegan cooking competition, what it meant to him, the enjoyable moments and the challenges.

“I’d been producing a lot for my agency, Pollution TV, and while doing commercial work for Google and Disney, I realised that all the ways we were being loud for these companies, we could be loud for veganism, environmentalism and social justice,” says Brown. He then came to realise that food would be a great way to tell such stories, which then resulted in the creation of High Cuisine.

He wants to use the show to let people know that being “plant-based is not a limitation but actually an opportunity to get creative and experimental”.

Brown explains his motivations for pairing plant-based food with cannabis: “The vegan movement and cannabis movement are both so similar and have so much overlap. To me, it’s about paying attention to what you put in your body. Where your ingredients come from has such a big impact on you and the world at large.”

He believes a lot of the content related to cannabis in popular media is condescending to the movement: “It’s not about just throwing some Doritos on a plate. Some of the most innovative chefs I know use cannabis either as a part of their cooking or to inspire their cooking. The most creative chefs right now are cooking in the plant-based space right because there’s so much that’s never been done and bringing those two groups together to me feels so natural.”

When asked about the obstacles, he recalls that it was “easier to get network approval for a show where the chefs get high than it was to get approval on a plant-based show.” His persistence on having a completely vegan show led to a point where he almost lost his position as showrunner multiple times. Nevertheless, he managed to push through and film 12 episodes filled with creativity and entertainment.

Each episode is around 15 minutes long, making it an easy watch that Brown adds “requires no agenda — anybody, vegan or not, can just sit down and spend 15 minutes laughing, watching amazing chefs trying to cook crazy dishes.”