Sweet, savoury, quick, slow — we’ve lined up some of the best high-protein vegan breakfast recipes on the internet.

I think we’re finally past the point of busting the protein myth when it comes to plant-based diets. Tofu, tempeh, seitan, beans, lentils, and certain nuts and seeds all boast a great amount of protein — and recipe websites and cookbooks have come up with some incredible ways to use these up.

Breakfast is considered to be the most important meal of the day — it gets you going, after all. We’ve scoured the internet to find some of the best vegan breakfast recipes that are high in protein, and they vary between flavour profiles as well as cooking times. 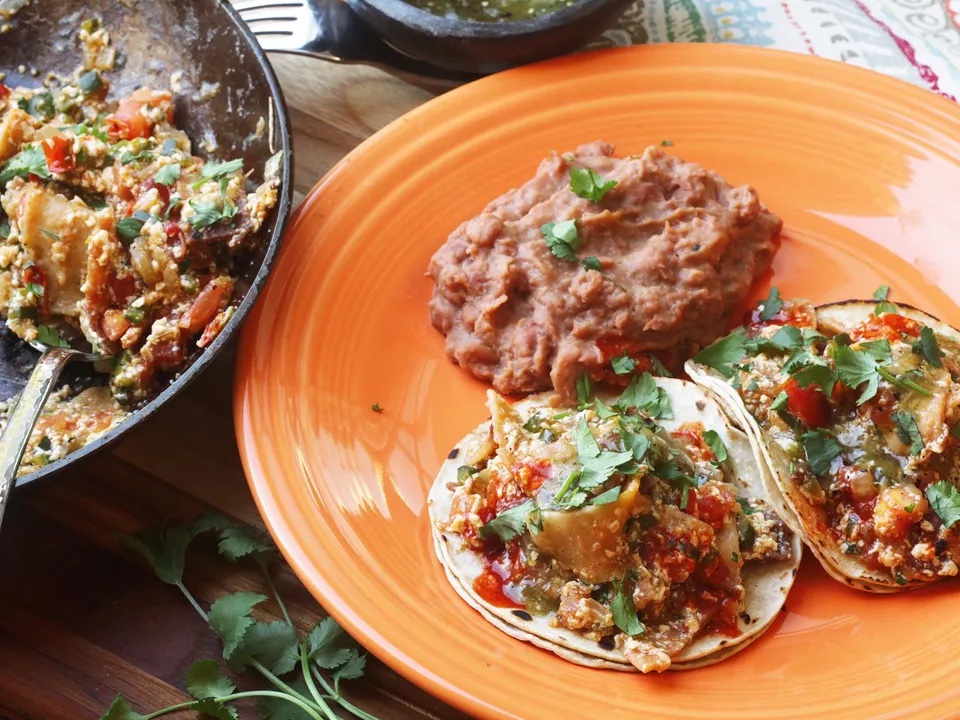 A classic from J Kenji Lopez-Alt’s deep-dives into the science of cooking for Serious Eats, this vegan migas, or as he calls it, vigas, is an ode to the Mexican breakfast of fried tortillas and scrambled eggs.

This recipe uses a silken tofu scramble. The genius is, instead of using turmeric to mimic the appearance of eggs, Lopez-Alt banks on the tofu’s texture. (There’s a separate article dedicated to the explanation.) A little paprika and cumin, combined with onions, garlic, chillies, salsa and fried tortilla strips make the dish moreish and hearty.

Top this with some avocado and chipotle hot sauce, and serve with some refried beans on the side. The tofu and beans amp up the protein and make this a satisfying vegan breakfast. 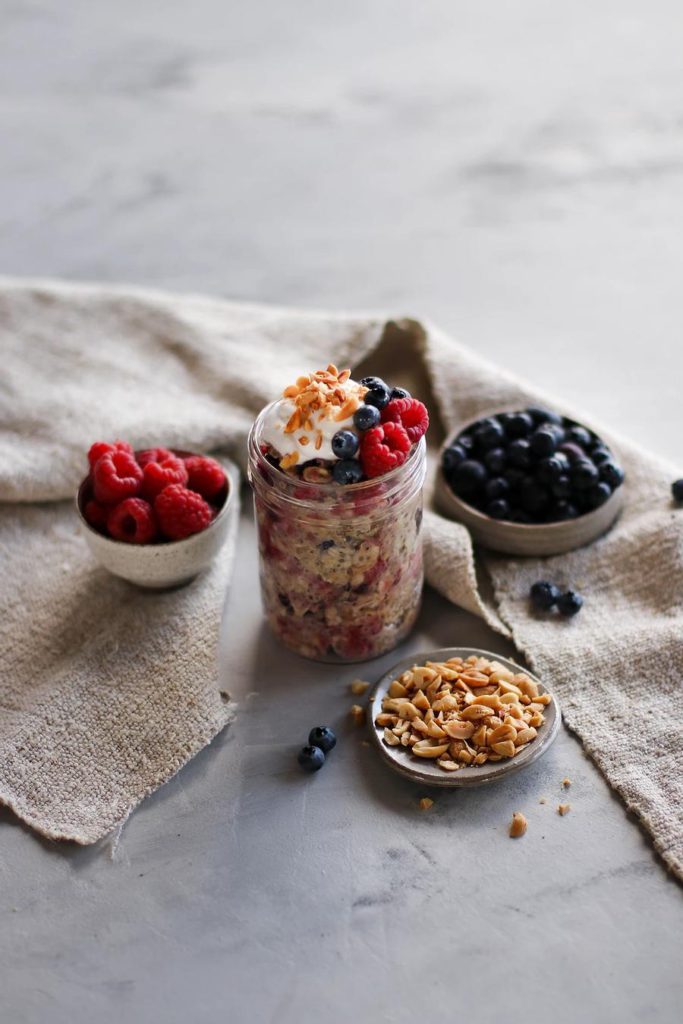 Pick Up Limes has a cult following among vegan YouTube fans, with its innovative takes on classic dishes, nutritionally balanced plant-based meals and serene vibe courtesy of host Sadia Badiei.

This recipe takes on two classics: overnight oats, and peanut butter and jelly. The result is an indulgent and fulfiling make-ahead breakfast that comes together in five minutes and an overnight rest.

The oats are met with peanut butter, chia seeds and frozen mixed berries, with a dash of cinnamon to bring all the flavours alive. Among Badiei’s suggested toppings are roasted peanuts, stewed or fresh berries, and coconut yoghurt.

As with any overnight oats recipe, this one comes with a multitude of substitution ideas. If you’re looking for some sweetness, drizzle over some maple syrup or agave. Not a fan of peanut butter? The recipe suggests swapping it for another nut butter like almond or hazelnut — and even vegan Nutella.

Peanut butter is among the most protein-rich nut butters out there. Chia seeds are a great source of protein, but if you don’t fancy it, Badiei says you could also swap with flax or hemp seeds, which have an even higher protein content. Or, you could use all three — that should give you plenty of protein to start your day on a high. 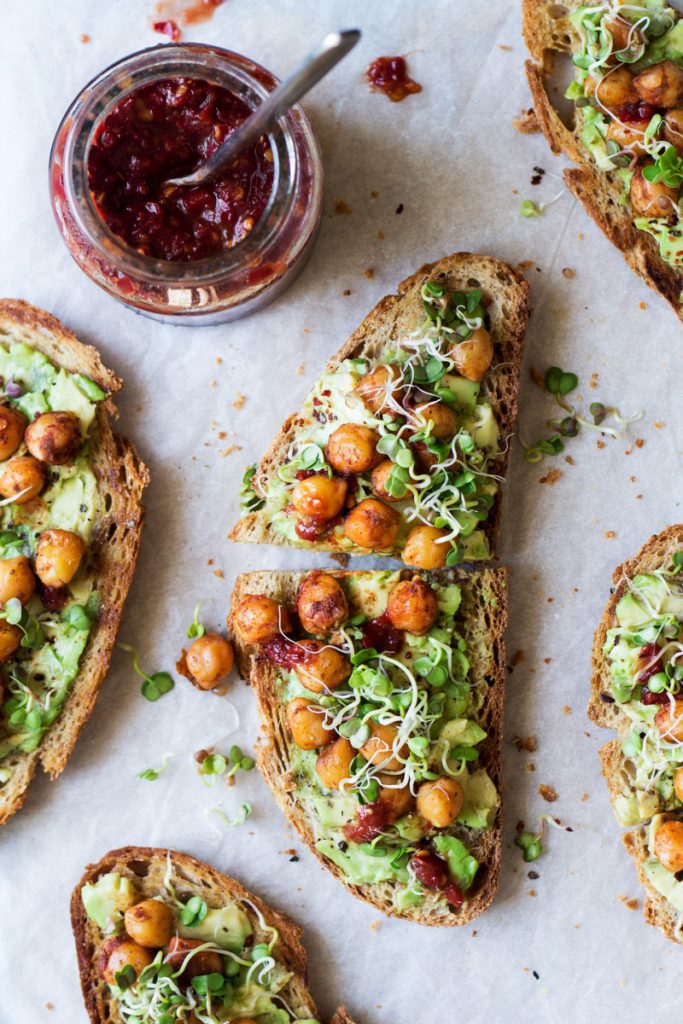 Let’s face it: we weren’t going to make it through a vegan breakfast list without the trusty avo toast? This one, by Lazy Cat Kitchen, is high in protein because of the chickpeas, which are flavoured with savoury spices to make a wonderful savoury vegan breakfast.

Chickpeas a great source of plant-based protein and have legions of uses. This recipe pairs them with olive oil, cumin, smoked paprika and chilli powder. It results in crispy, spicy chickpeas that pair beautifully with the lime-spiked avocado. This is topped with radish sprouts or baby rocket.

If you want to increase the protein content in this, use a seeded bread. Chia, hemp, pumpkin and sunflower seeds are high in protein and work well together. For a more left-wing option, you can drizzle some almond butter, which shines in savoury recipes. 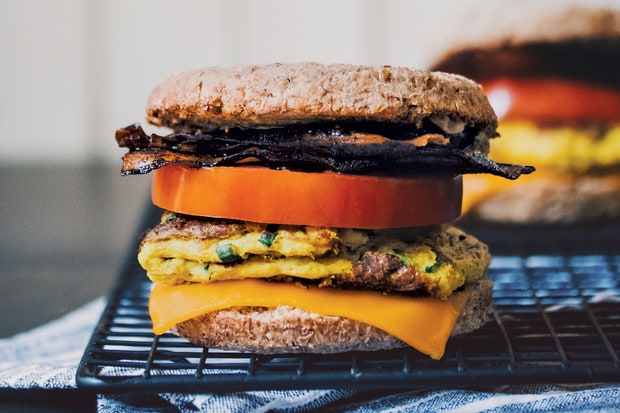 Okay, so this recipe is by hot for food’s Lauren Toyota, but it differs from her original in the addition of the different spices as well as the toppings.

The beauty of this recipe is that it isn’t a tofu scramble — but the tofu is manipulated to look more like an omelette. Medium-firm tofu is blended with plant-based milk, nutritional yeast, tapioca flour, turmeric, garlic powder and onion powder, with chives mixed in at the end.

Fried with some butter to resemble an omelette (or “egg patty”), it’s placed in a toasted English muffin with vegan cheese, a large tomato slice and Toyota’s cassava bacon.

Now that is a vegan breakfast high in protein and flavour. Looking for more? Use some storebought vegan bacon, which is usually made from plant-based proteins, and add some refried beans on there.

Read our interview with Lauren Toyota. 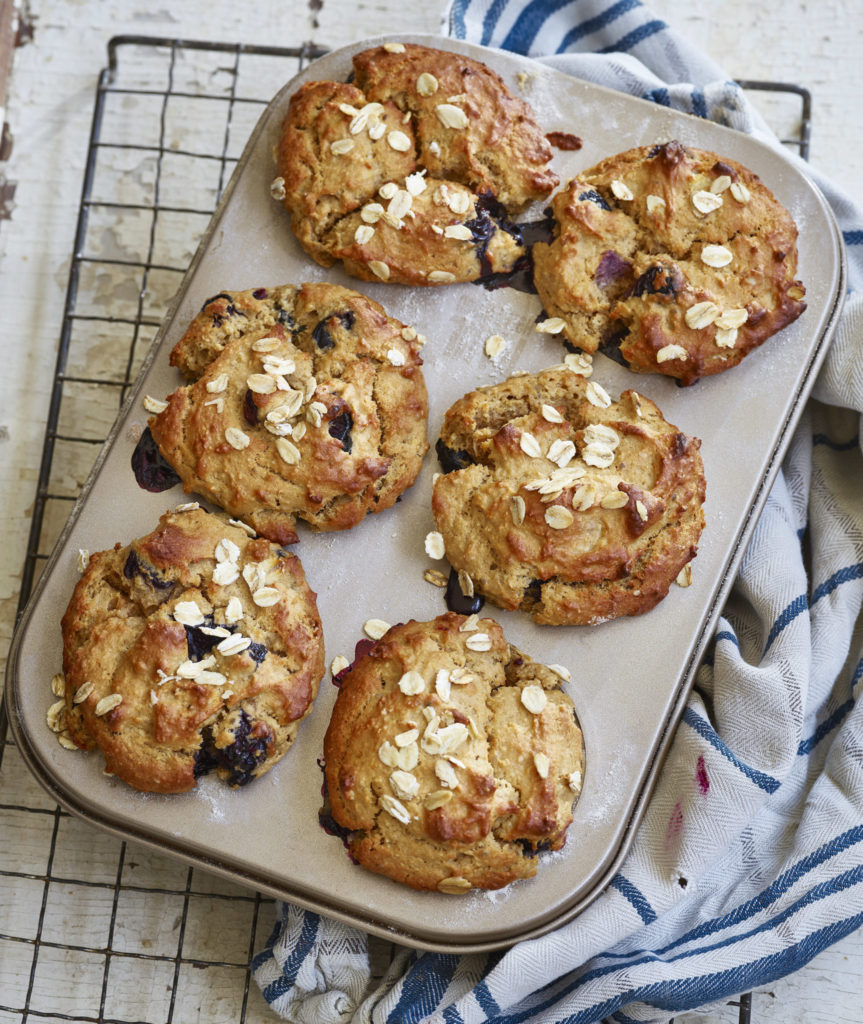 These high-protein vegan blueberry muffins are a great make-ahead breakfast option. Gaz Oakley has risen through the ranks to become one of the UK’s most popular vegan influencers with his Avant-Garde Vegan brand — and it’s recipes like this that prove why.

The chia seeds act as an egg replacer and also add to the protein content of the muffins. They’re mixed with melted vegan butter, lemon zest, alt-milk and mashed banana.

On the dry ingredient side, oats, ground almonds and self-raising flour make up the base for the muffins. Coconut sugar and blueberry bring sweetness and freshness to the recipe. And the protein comes from protein powder (Oakley recommends Nuzest).

Bake a batch of these on the weekend and have them on the go. Want more protein? Top them with chia and sunflower seeds, which pair delightfully with blueberries. 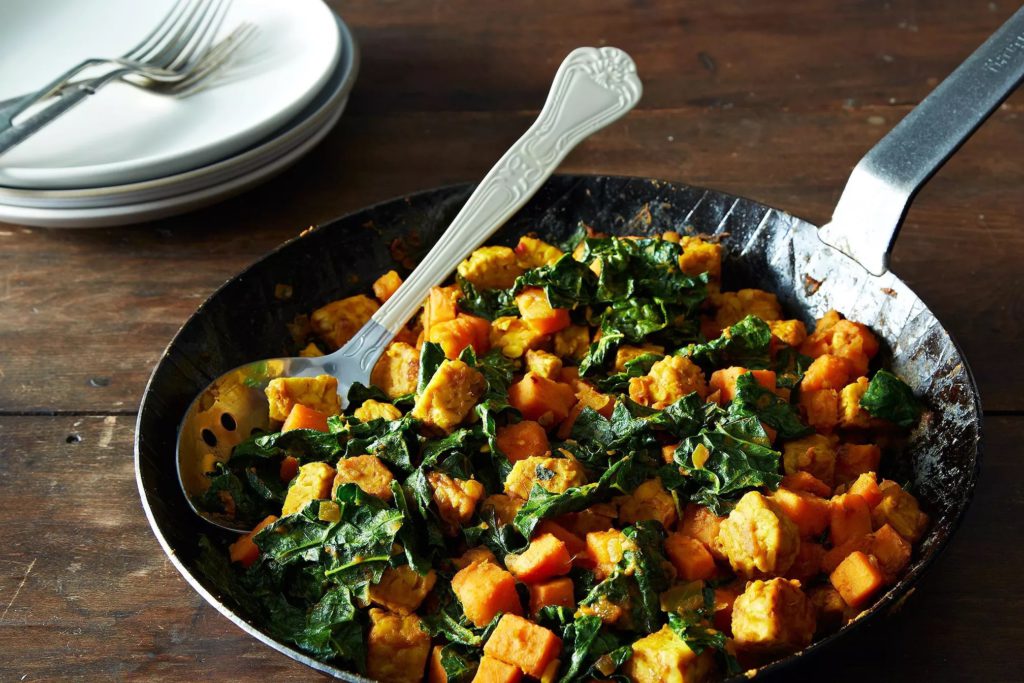 A vegan take on the classic potato and meat breakfast, Gena Hamshaw’s recipe for Food52 employs tempeh and sweet potatoes to achieve the same fulfilment.

The sweet potatoes are baked until tender and added to a pan containing onions and tempeh. This is then spiced with tamari, turmeric, smoked paprika and mustard, and cooked in vegetable broth.

It’s finished with kale and chilli flakes, and makes for a comforting breakfast. Honestly, I’d have this for lunch or dinner too. And if you want to make this already high-protein vegan breakfast even more protein-rich, cook some tofu scramble on the side and add it on top of the plated hash. 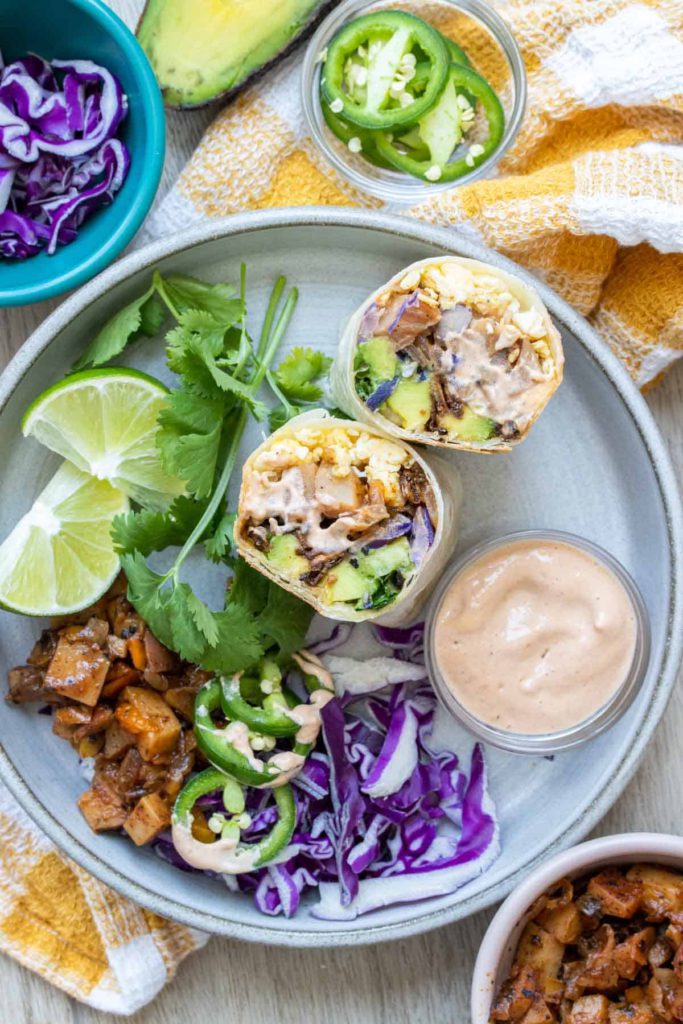 I find breakfast burritos so exciting. They’re packed with flavour, texture, and protein. Veggies Don’t Bite (what a great name) has an incredible vegan breakfast burrito recipe that uses tofu and black beans to provide the high protein content.

The recipe uses storebought crumbled tofu, canned or home-cooked black beans, breakfast potatoes and portobello mushroom bacon as its base ingredients, all wrapped up in a tortilla with a slew of suggested toppings. These include shredded cabbage, avocado, red onion, jalapeño, salsa, hot sauce, cilantro cream sauce and shredded cheese or cheese sauce.

This will fill you up and keep you satisfied until lunch. To get even more protein out of it, use storebought vegan bacon and a silken tofu-based sauce or dressing.

Anay Mridul
Anay is the managing editor of The Vegan Review. A journalism graduate from City, University of London, he was a barista for three years, and never shuts up about coffee. He's passionate about coffee, plant-based milk, cooking, eating, veganism, writing about all that, profiling people, and the Oxford Comma. Originally from India, he went vegan in 2020, after attempting (and failing) Veganuary. He believes being environmentally conscious is a basic responsibility, and veganism is the best thing you can do to battle climate change. He gets lost at Whole Foods sometimes.
Previous articleMeat-eating and car-driving mean men cause more climate emissions than women
Next articleFrance adopts climate law that reduces meat on school menus