Are Holocaust comparisons doing more harm than good to veganism?

Holocaust analogies within the vegan community are by no means new, nor credited to one person. To date, ‘#animalholocaust’ has amassed over 27,000 posts on Instagram.

However, the damaging impacts of these parallels have been called into question following recent backlash against James Aspey, who defended his decision to label the animal agriculture industry an “animal holocaust”.

Whilst Aspey has bullishly doubled down on his words, spurred on by his supporters, there are many who have pointed out the false equivalence in his analogy. The Holocaust of World War II, which killed six million Jews and millions more including Romani, disabled, and gay people, was a state-sponsored program designed to wipe out those whom the Nazis viewed as sub-human. The animal agriculture industry, though brutal in its own ways, is an economic system of food production; it is not propelled purely by hatred of animals, and their annihilation is not its sole purpose.

Beyond this glaring distinction, a number of Jewish people have expressed concern that the trivialisation of the Holocaust allows antisemitism to fester within the vegan movement.

Kayla Kaplan, founder of TheVeganZine and a Jewish, anti-oppression vegan, also used her platform to publicly denounce Aspey’s terminology. “I obviously am not comfortable with him using that language, especially because he is doing so for clout — for likes, for views, for more money,” she states. “They all claim it’s for the animals, that they have to use this word for the animals, when in reality the animals aren’t speaking our language and aren’t really caring what word we use to describe it as long as we work to end their suffering.”

Aspey hangs his defence on the dictionary definition of a holocaust: ‘destruction or slaughter on a mass scale’. By this logic, he insists that the so-called “animal holocaust” is valid, distinct from the Holocaust of World War II. However, Kaplan points out that this reductionist approach to language fails to factor in the importance of context: “When you say holocaust right now, people think of the Shoah, the Holocaust of WWII that was instigated to exterminate Jewish people, and along with that, Romani people, disabled, queer, and other communities. When you say it, it might not convey the meaning that you want, regardless of intent.”

Geyser makes a similar observation, stating, “No one is arguing that it isn’t a genocide, or whatever you’re going to call it, but we’re missing the nuance. People aren’t walking around with dictionaries, so putting that much stress and basing your activism on a dictionary definition almost seems to me that they end up making it about being right rather than about being effective.”

The question of effectiveness is one that activists such as Aspey ought to be asking. In a telling comment thread beneath one of Aspey’s posts, a non-vegan expressed how he had been sympathetic to the vegan cause but was put off by the belittlement of the Holocaust. The abuse of Holocaust parallels is driving both vegans and non-vegans away from the community.

Geyser says: “I’ve spoken to Jews who are interested in being vegan but because of the antisemitism they experience, they couldn’t actively join the community. I do understand where people are coming from when they say that they want to focus on the non-human animals because there really isn’t any other movement for them, but I do think it’s important for people to feel safe because we need as many people as we can take to fight for them.”

Though plenty of Jewish and Romani people have condemned the likening of animal farming to the Holocaust, there are some who applaud the parallels. Aspey has heralded the works of Holocaust survivor Alex Hershaft as justification for his language, and other Jewish vegans have themselves equated the Holocaust with the exploitation of animals.

The broader problem, Kaplan stresses, is the widespread lack of understanding of this intricate and traumatic subject from those outside the affected communities. “There’s no nuance when they’re using this term,” she says, “and they’re not doing so to amplify Jewish and Romani voices or our culture and our heritage; they’re doing so to manipulate it and distort it to further whatever cause or point they’re trying to make, vegan or otherwise. It’s not about speciesism, it’s about respecting the people who were affected by the Holocaust.”

Antisemitism is, undeniably, on the rise. Both the UK and the USA reported record highs of antisemitic hate crime in 2019, followed by further record levels of online antisemitism in the UK during the first half of 2020. Only three weeks ago, images emerged from the January 6 insurrection on Capitol Hill of a man in a Camp Aushwitz hoodie: a chilling reminder that the antisemitic hatred proliferated by Nazi Germany is still very much alive. 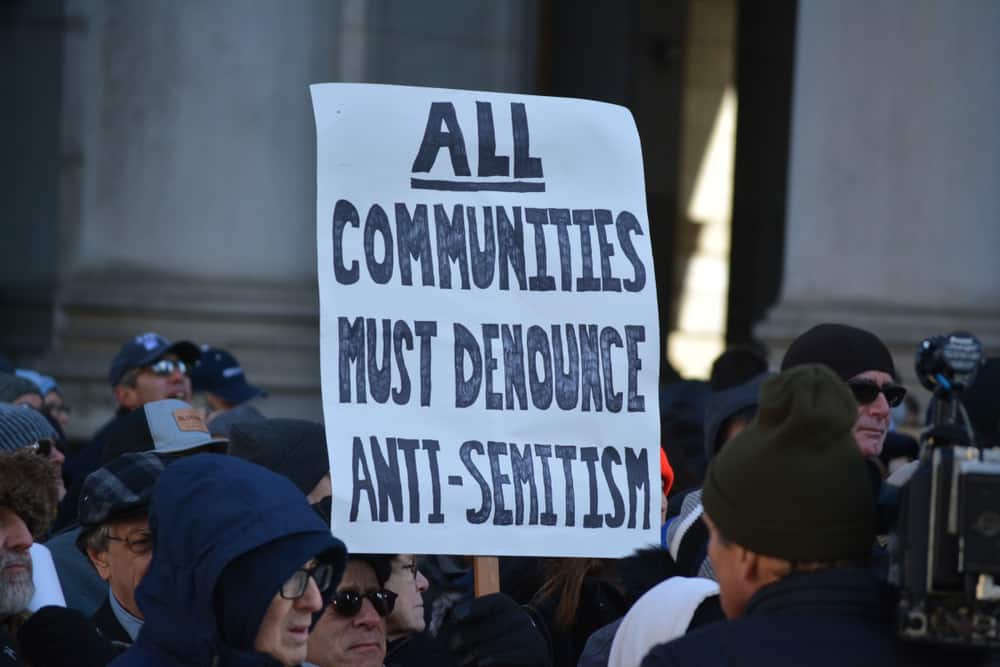 These horrific events have made Geyser fearful. “Since I’ve been seeing more antisemitism in the community, I myself have been thinking: ‘If something comes down to it, which non-Jewish friends can I actually trust?’ It’s so crazy that that’s something in our DNA, whether or not we’ve directly come from people who’ve experienced it, it’s always in the corner of the mind, the mentality of needing to escape. A lot of the people using these Holocaust comparisons don’t understand that; they stick to the dictionary definitions and context doesn’t matter.”

As a movement grounded in compassion and justice for all living creatures, the vegan community needs to extend its advocacy towards human rights if we truly want to achieve liberation for all. By addressing antisemitism in our activism, we can create an inclusive, intersectional movement which respects all animal life, both human and non-human.

As Kaplan explains: “There are many parallels between atrocities committed against human and non-human animals, but we don’t have to detract from one struggle to uplift another. Exposing the truth of what’s done to animals doesn’t have to come at the cost of a human animal’s suffering.”

Amy Nicholas
Amy is a regionally and nationally published journalist. Having finally broken up with dairy during Veganuary 2018, she believes that our diets are one of the biggest personal changes we can make in tackling the climate crisis, though she also advocates for urgent, systemic action. Amy recognises the intrinsic link between climate activism and social justice, and feels we must address both with the same energy and urgency. When not writing, Amy is a performing arts teacher, and loves nothing more than belting out show tunes in her kitchen (much to the dismay of her flatmate).
Previous articleEVO Foods: Revolutionising India’s alt-protein industry, one egg at a time
Next articleQ&A with the co-founder of Fons, the world’s first vegan empanada store