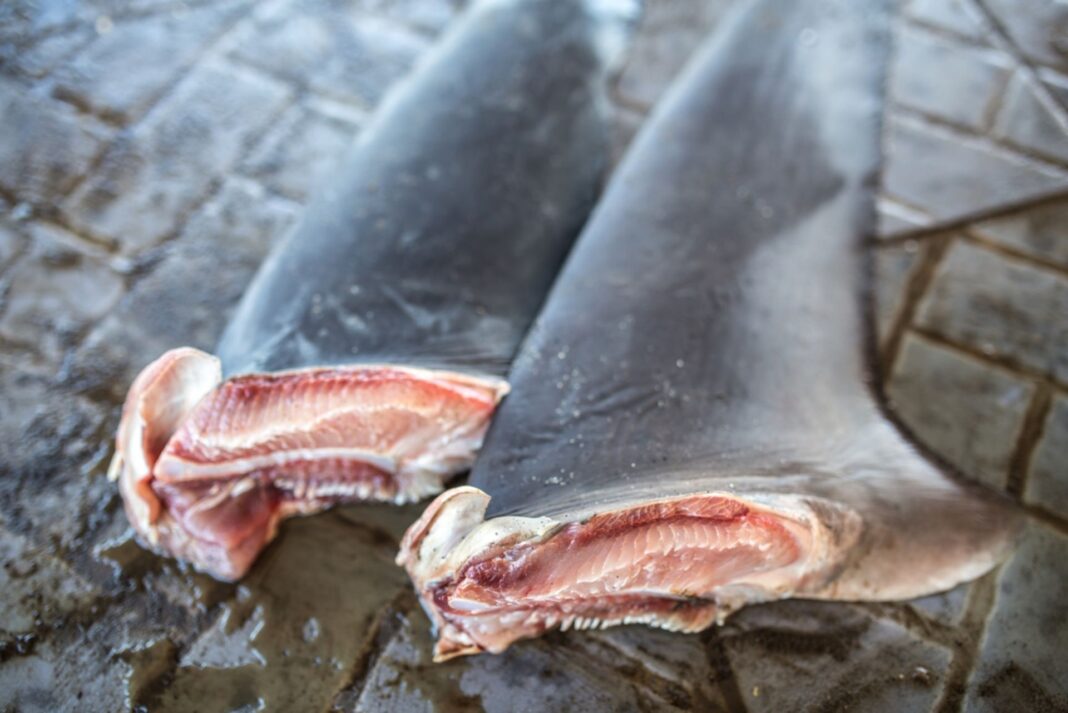 Media franchises like Jaws have led to gross overestimates of shark-related deaths. Meet the people fighting for a cause that many ignore: shark finning.

“What you really need to be afraid of is the fact that more people are killed by selfies than sharks per year,” says Andrea Richey, executive director of the Hong Kong Shark Foundation (HKSF). Also known as Shark Lady, Richey is one of Hong Kong’s few proponents for shark conservation. She has delivered thousands of talks thus far, focusing on raising awareness amongst students, as well as getting schools and large corporations involved.

Her actions have inspired policy change, and her arsenal of lesser-known facts work to dispel the stigma surrounding sharks. Shortly after her father’s passing in 2015, she immersed herself in charity work, eventually realising her calling in shark conservation. “I decided to do some volunteering and give back a bit more,” she explains. “This is a global shark crisis, and I think that’s important for people to know.”

She goes on to state some sobering facts; “190 sharks are killed per minute” was one. This amounts to a staggering 100 million killed annually.

What is shark finning?

Many people assume, incorrectly, that shark finning is victimless. The process of collecting fins involves slicing the fins off live sharks, then tossing them back into the water. Without their fins, the sharks are unable to swim, eventually sinking to the seabed where they die a slow and agonising death.

Sharks are vital in sustaining marine life: as the top of the food chain, they prey on smaller fish, maintaining the biodiversity and balance of marine ecosystems. If sharks were to go extinct, these fragile ecosystems would be decimated, leaving our oceans devoid of life.

Although shark fishing is a global issue, Hong Kong — a city renowned for its seafood — has more than a hand in it. “50% of the global shark fin trade is imported through Hong Kong. We don’t even realise it, but it is the shark fin capital of the world,” says Richey. The fishing and consumption of shark fin are legal in Hong Kong; only the fishing of a small handful of protected species is illegal.

Enter Stan Shea, the marine programme director and head of Bloom’s Hong Kong-based team. Having had an interest in animals from a young age, he took the opportunity to study environmental sciences, before volunteering in a marine biology-related field. From there, he went on to obtain a master’s degree in the subject. He notes that this was when he first picked up on people’s indifference. He expresses his disappointment: “People do not think about fish or care about the marine environment.”

He also laments a lack of studies and data in the field. To counter this, Shea and his team conduct hands-on research, ranging from local diving expeditions to social surveys. They work to understand the ins and outs of the shark trade, looking at imports and exports from Hong Kong and various other countries, mapping out the movement of shark products.

By using DNA analysis and morphology, they identify the various shark species on the market, which allows them to differentiate between species, determining which ones are threatened or endangered.

“The number of species being traded in the market is higher than the total number of species in the aquarium in Ocean Park,” he notes, then adds half-jokingly: “The best place to see sharks in Hong Kong is actually in the retail market.”

Shea and his team partnered with the Social Sciences Research Centre at Hong Kong University to carry out surveys on shark fin consumption in the years 2009 and 2014, in an attempt to understand the general public’s view.

Hong Kong has a centuries-old tradition of shark fin soup, which dates back to the Song dynasty. As denoted by its steep price tag, this delicacy is deemed a status symbol, signifying wealth and prosperity, and is eaten more for its social connotations than for its bland taste. Shark fin soup has a firm place in Chinese culture and is commonly served at wedding banquets. But should tradition always be honoured?

When asked what their reason for consumption was, most respondents selected either tradition or taste. This is interesting, as shark fin is gelatinous and does not have much flavour. Even Gordon Ramsay has denounced the dish. On an optimistic note, survey results show an overall positive trend: shark consumption declined over those 5 years, with 81.1% of people citing environmental concerns as their reason to swear off the dish.

However, certain sections were less promising. An astonishing 25% of people believe the ocean is an unlimited resource, with unlimited marine life. Shea mentions that one of the difficulties he faces is dealing with public perception, citing the statistic above as an example.

What is the ultimate goal?

Both Shea and Richey place a heavy emphasis on sustainability.

“Every person has a responsibility,” Shea says, referring to both consumers and providers. He describes a conundrum here, explaining how the catering sector blames suppliers for a lack of sustainable options, whereas the suppliers blame the market, citing a lack of demand. “People are pointing fingers to different sectors.”

He hopes that sustainable seafood becomes mainstream, and that when people take responsibility, this can become a reality. “That’s how I see it in the future, or even as the ultimate goal. People look for the sustainable option. People start learning what they’re eating,” he adds.

Richey believes in a world where we don’t consume marine life at all, with bans on products like shark fins. “We just can’t continue to do this, we’re decimating the shark population in the world. We’re decimating the fish population in the world. This is something we need to control, and one of the ways to control it is to stop eating these products,” she explains. She hopes to raise shark population numbers back up to where they were decades ago.

What are the challenges?

Richey is working towards getting restaurants and businesses to pledge to cease serving or transporting shark fins. She has several other campaigns in action, and is continuing her outreach to schools and corporations.

Shea is continuing his research, and you can contribute too, in an initiative to document fish species in Hong Kong. Both Shea and Richey continue to educate the youth of Hong Kong, providing seminars and raising awareness for their cause.

Bloom and HKSF are both NGOs, meaning they receive little to no external funding. Therefore, their lack of resources and manpower are their biggest hurdles.

“If we look at the shark fin trade, there’s millions and millions of US dollars per year put into the trade, but we never actually see the equivalent amount of money put into marine conservation,” Shea points out.

How can you help?

Organise fundraisers (keeping social distancing in mind, of course) and donate to these causes if you can. If you’re based in Hong Kong, apply to be a volunteer. Other meaningful actions you can do are raise awareness by telling people you know and sharing articles and posts, and sign pledges and petitions.

At the end of the day, the simplest solution is to stop buying and eating these products, Richey reiterates. “It’s why we say: ‘When the buying stops, the killing can too.’”

Lok Yi Siu
Lok Yi is a student born and raised in Hong Kong, with a strong passion for animal welfare and the environment. She believes in making veganism accessible to everyone. With a love for cooking, baking, and eating, she hopes to introduce the world of veganism to others through the power of irresistible food.
Previous articleMaking vegan Indian musical instruments: Into the minds of creative geniuses
Next articleChinese Startup; Zhenmeat Launches Vegan Crayfish And Deep Fried ‘Pork’ In China