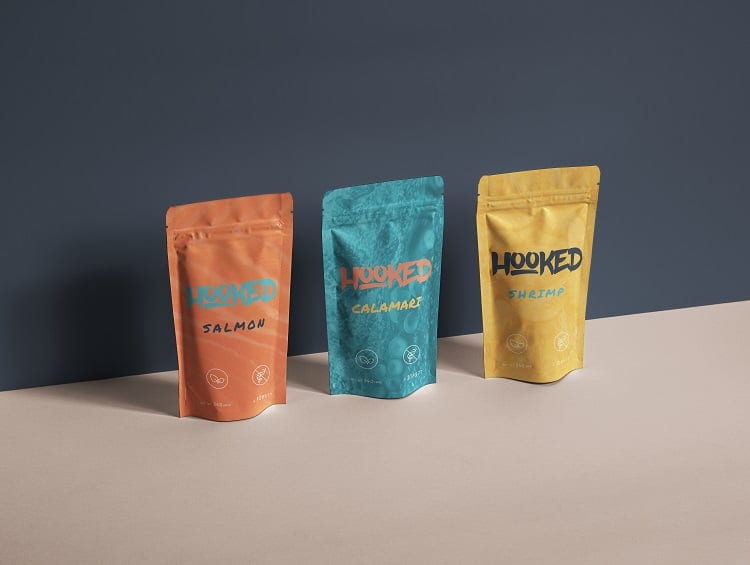 Sweden based startup ‘Hooked Seafood’ wants to make the word’s first vegan shredded salmon and tuna in Europe. The company’s recipe is made with soy protein isolate, seaweed and algae, algal oil (as a source for omega-3 fatty acids), carrots for colour, and smoked ingredients for added flavour.

The company was founded in 2019. By Emil Wasteson and Tom Johansson. The pair felt that there were a lack of vegan products that could challenge traditional seafood in both taste and nutrition. They were also concerned about the farming practices and state of the seafood industry.

“There existed very few products and none that tasted good, or had the same nutritional value as traditional seafood,” ​says Johansson to Food Navigator

The State Of The Seafood Industry

Johansson and Wasteson were most concerned about the shrimp farming practices in Asia, where their goal is to produce as much shrimp as possible. Some practices were the overuse of antibiotics on shrimp farms; and the presence of mercury and microplastics in sea animals.

“It became obvious that the current seafood industry is environmentally unsustainable. And that seafood consists of more toxins than ever before.​ With the booming of plant-based foods, we saw a great market potential as well as an opportunity to make a large social impact.”

“We found that the problem with shrimp is essentially the same for tuna and salmon. The issue lies in producing as much as possible for as low cost as possible. Demand is growing for seafood, what is [compromised] is the health of the animals and the planet.”

Hooked recently got accepted to join Berlin-based  ProVeg International incubator where they received €20,000 ($22,760) to fund the development of their product and company.

Although they are still trying to finalise their vegan shredded salmon, they plan to first launch their vegan tuna which was developed in collaboration with a co-packer in the Netherlands. The company will begin its commercialization in the foodservice sector before eventually expanding to retail and grocery.

Hooked Seafood also plans to develop a vegan shrimp and calamari. Bringing them closer to their mission of being the leading plant-based seafood company in Europe.

Damoy Robertson
Damoy Robertson is an entrepreneur and founder of The Vegan Review. Damoy is dedicated to spreading veganism to the masses which he believes will enable people to make better, more informed decisions concerning the way we all interact with animals and our planet.
Previous articleIKEA Launches Its Vegan Hotdog In Australia
Next articleMarks & Spencer Continue With Their Vegan Launches