hot for food’s Lauren Toyota: ‘The vegan mission is my lifelong mission’

Lauren Toyota on transitioning from broadcast TV to the world of social media, how veganism has always been her destiny and creating her vegan community, hot for food.

“It’s a feeling, right? I am hot for food. It’s edgy, kind of sexual. Hot for food. I think that’s just how I feel about food,” says Lauren Toyota.

She’s a Canadian TV personality who worked in the broadcast industry for almost ten years. It was always a dream for Toyota to be on air from a young age; presenting, producing and editing. She was a MuchMusic VJ in Vancouver, working alongside A-listers such as Selena Gomez, Pitbull and Justin Bieber. She tells me: “That was a dream come true. As my career evolved in television, I did various shows for different channels and that gave me the foundation for what I do now.”

Although the broadcast path gave her endless opportunities, like travelling the world, the industry was not dependable, with many layoffs and cutbacks on shows. Luckily, Toyota created a vegan food Instagram account called hot for food whilst working in TV. Unexpectedly to her, it gained major success, allowing her to transition and work full-time as a vegan influencer.

“I started hot for food because I was like: “Where is all the good vegan food?”Toyota began her blog as a side hustle when she first became vegan in 2010. It initially documented the transition period from eating meat to slowly implementing vegan substitutes into her diet. In 2014, her Instagram engagement increased, as she relaunched her blog and started a YouTube channel. Toyota truly believes that she created her vegan platform at “the right time of the Internet”.

“Having done hot for food full-time since 2015, I don’t know if it’s luck, or when you’re naïve to something, when that magic thing happens,” she tells me. She believes it was the universe’s message, aligning her to put in hard work and strenuous hours, refining her skills and expertise to create her own business. “My whole life is basically vegan.”

Toyota has always been a flexitarian: predominantly vegetarian for years, but eating meat at times too. She noticed however that certain foods were affecting her health: “I feel like in the back of my mind, it was saying you are going to need to go vegan.” Her main reason was to improve her health, but she has also always been “connected to animals and the guilt that comes around eating animals”. 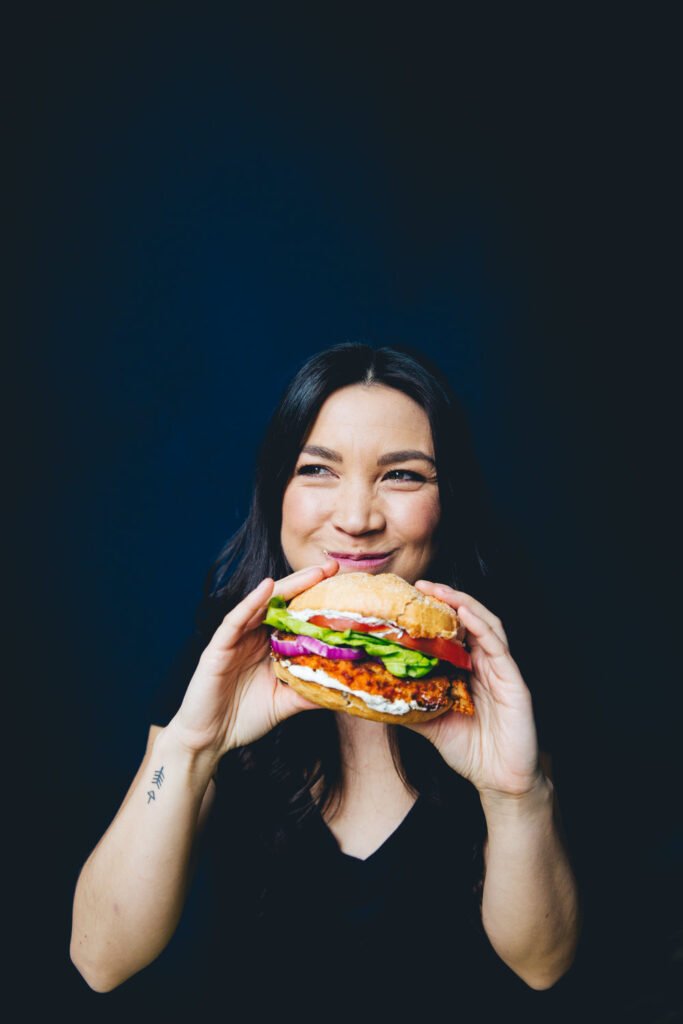 “I used to eat so much cheese, I was addicted,” she reveals. Toyota read the book Skinny Bitch, which talks about cheese addiction and how, if you stop consuming it for 40 days, you will no longer be addicted. However, she tasted some cashew cheese and became addicted to vegan cheese. “I replaced one addiction with another,” says Toyota.

A pivotal moment in her career was around 2014, when her Instagram page reached over 100,000 followers. “That was when I was like: “I’ve now become one of those accounts that I’ve always looked at and observed,” recalls Toyota. Currently, the account has over 368,000“hot for foodies” and is a constantly growing vegan community.

For Toyota, being in the food industry almost seemed like her destiny. She has always been interested in modifying and experimenting with recipes, even when she wasn’t vegan. As a child, she had aspirations of being a chef and working in a restaurant. “I used to play pretend with my sister that I was the host of a cooking show,” she tells me, adding that it has been a “lifetime creation”, that she was always meant to be vegan and sharing her creations with the world. “I am actively invested in this cause and purpose.”

Although more casual and less glamourised than TV, she says her social media platforms are“for passionate food people to have an infinite resource of vegan recipes”.

With YouTube, she feels she can be more herself on screen: “At the end of the day, it is rewarding because it’s all created by you and you aren’t giving the work away to someone. Broadcast is very disposable, whereas building a community online has more meaning,” she tells me.

As well as sharing recipes, Toyota’s favourite videos to create are ‘What I Eat n a Day’ and ones where she’s raiding her own pantry, seeing what she has and making something new from scratch.

However, she sometimes feels as if she is not in the right space to make content: “One of the biggest challenges is trying to keep up with the momentum and expectation that comes with being online.” The vegan influencer experiences the downfall of social media, where she feels as if she always has to give so much content to her fans.

During her vegan career, however, Toyota released her first cookbook, Vegan Comfort Classics. It was voted as the best cookbook in the 2018 Veggie Awards by VegNews Magazine. Additionally, as an activist, proceeds from the sale of the hot for food ebook is donated to support BIPOC communities in USA, specifically to Food Love by Might Be Vegan.

Toyota is releasing her second cookbook in March 2021, with “achievable, casual, everyday cooking” compared to “the epic, over the top recipes full of novelties” in her first book.

With everything she has achieved, Toyota toys with the idea of perhaps becoming “a private chef or doing a cooking course, making more books or grocery products” in the next decade.

Currently, she is taking a step back and reflecting on her career: “I guess I’m just grateful that things turned out the way they did because being vegan is so important to me; it is part of my being and the vegan mission is my life long mission, which makes doing this job much more enjoyable.”

Mansi Vithlani
Mansi Vithlani is a journalism student at City, University of London. A vegetarian her whole life and a massive foodie, she enjoys discovering more about veganism and eating vegan cuisine! She enjoys investigating social media based stories and how its influence has made a significant difference in the last few years.
Previous articleChikyū review: Vegan sushi dreams made real
Next articleAnimal rights in China: The lowdown on legislation, markets and consumption