How does veganism affect periods and the menstrual cycle? 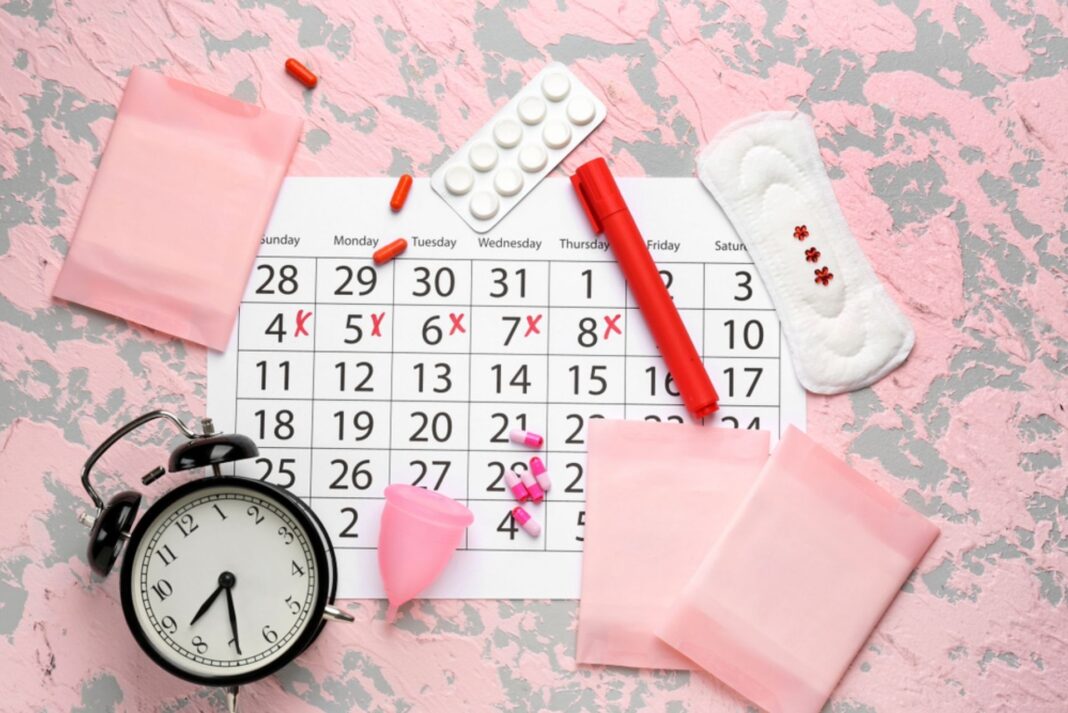 A woman’s menstrual cycle can be affected by various factors, and diet is one of them. What is the impact of veganism on one’s periods?

The menstrual cycle is the time from the first day of a woman’s period to the day before her next period. Girls typically start their periods around the age of twelve, but it can be from the age of ten upwards.

The cycle is controlled by hormones and the rising levels of oestrogen, causing the ovary to develop and release an egg to be fertilised — this is called ovulation. At the same time, the womb lining also starts to thicken. The hormone progesterone aids the womb to prepare for the embryo to implant. However, if the egg has not been fertilised, it is reabsorbed into the body, hormone levels fall, and the womb lining sheds, leaving the body as a period.

Many factors can determine cycle length, how much you bleed and even mood and what you eat is one of them. Dr Shirin Lakhani of Elite Aesthetics explains the many ways that veganism can affect your cycle.

The impact of diets on the menstrual cycle

“Eating a balanced, healthy and nutrient-rich diet is crucial to maintaining a regular menstrual cycle,” says Lakhani. “If you don’t eat enough or experience extreme weight loss, you can affect your menstrual cycle so much that your periods can stop.”

She explains that diet plays a significant role because it affects the hormones, which impacts the menstrual cycle. The doctor explains that what you eat determines the number of healthy vitamins and minerals your body receives, which in turn affects all of the body’s functions.

“Eating too much or too little can affect hormone levels, which in turn causes your menstrual cycle to be altered.” If you have been trying out a new diet or have not been eating well, you could notice an irregular period.

A lack of specific vitamins and minerals can also make premenstrual syndrome (PMS) symptoms more severe due to the same hormones being affected. “For example, a lack of vitamin E can result in heavier periods and more stomach pains, whilst a lack of vitamin D has been linked to more painful cramps, headaches and acne.”

While Lakhani says there is not much evidence to suggest that a diet consisting of animal products affects the menstrual cycle, it is worth looking at the bigger picture. “The fact that people who don’t eat meat products tend to have a lower body weight, which can affect the menstrual cycle,” says Lakhani.

“The fact that people who have an eating disorder are more likely to have followed a vegan diet in the past, usually as a way of restricting food intake. And of course, eating disorders can affect the menstrual cycle.”

Does veganism have an impact on the menstrual cycle?“Whilst studies are inconclusive, some people believe that a vegan lifestyle has resulted in them experiencing lighter and less painful periods, as well as less severe PMS symptoms.”

Are period products sustainable? Read our story on why they can be damaging to the environment.

The challenges of veganism on periods

Lakhani reveals that although, a well-planned vegan diet can be “extremely healthy”, people who do not eat meat products are at a greater risk of developing an iron deficiency, which could leave you tired and short of breath. Absence of the mineral can lead to anaemia, a condition where you lack healthy red blood cells to carry oxygen to your body’s tissues, which can make you feel week and fatigued.

“A low blood iron level is the most common cause of anaemia in the world, especially amongst women,” says Lakhani. “During menstruation, women lose iron-rich blood each month, this coupled with a lack of iron from meat products can exacerbate anaemia further.”

Iron is found in red meat, and while many plant-based foods do contain iron, it is not as easily absorbed. This is why Lakhani stresses on eating more iron-rich plant-based foods like dark leafy greens, beans, lentils, tofu, grains, dried fruits and nuts to help counter the lack of meat-based iron and reduce the risk of developing anaemia. 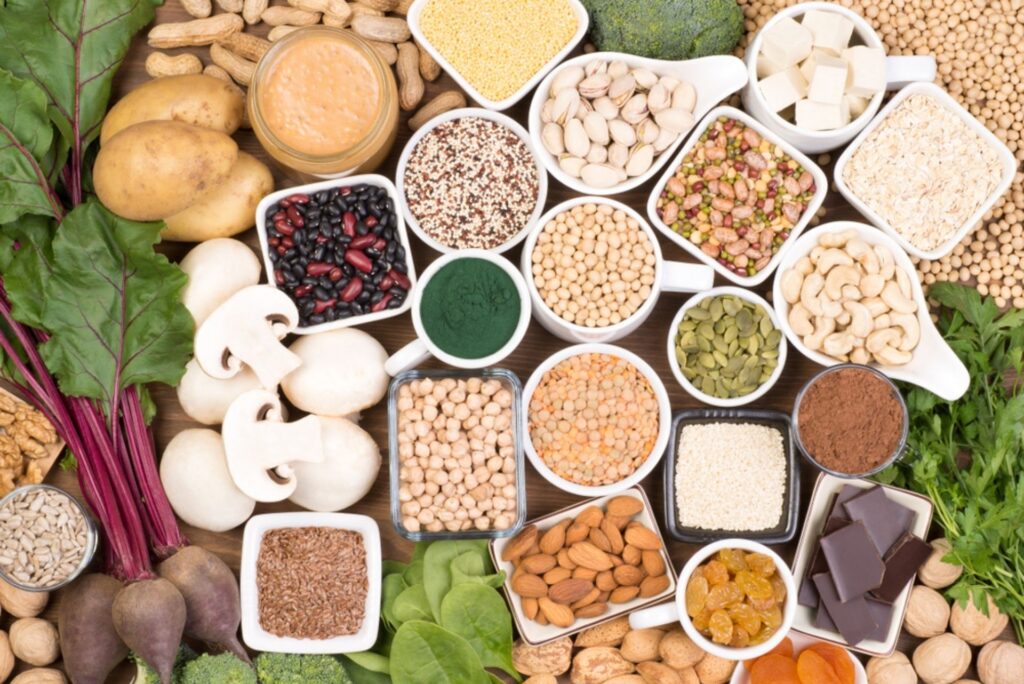 How veganism affects PMS and moods

Lakhani says that many vegans have reported a reduction in PMS symptoms and believes it could be due to the absence of dairy: “The protein found in cow’s milk is a significant source of inflammation. Inflammation is believed to be associated with more severe PMS symptoms, so a dairy-free diet could help reduce the physical PMS symptoms.”

As mentioned, many women will experience mood changes before their periods start, and what you eat can affect how you feel.

“Research suggests that vegetarians may be happier than meat-eaters, and they also had lower scores on depression tests and mood profiles than fish and meat-eaters. Many women who adopt plant-based diets have seen fewer mood swings during cycle days,” says Lakhani.

The average menstrual cycle length is 28 days, but this varies and could be between 21 to 40 days, which is normal; periods themselves last around two to seven days.

“Many vegans have shorter periods than the average. This could be down to low iron levels or lower BMIs.”

Women will roughly lose around six to eight teaspoons of blood during their periods, but that can also be up to 16 teaspoons. Whether the flow is light or heavy, it is considered as normal, but if periods are heavy, it could be due to problems like fibroids or endometriosis —but there isn’t always an underlying cause. However, a heavy flow can impact a woman’s everyday life, and many prefer a lighter flow.

“Whilst I’m not aware of any studies to prove this, it’s believed that women who adopt a plant-based diet report a lighter flow during their period,” says Lakhani. “Eating the right foods as a vegan could help reduce the heaviness of your blood flow. For example, consuming more seeds and legumes that contain phytoestrogens are ideal for this.”

Check out our Ultimate Guide to vegan and sustainable period products.

How does veganism affect menopause?

Menopause is when a woman stops having periods and will no longer be able to conceive naturally. It is a natural part of ageing and women and occurs between the ages of 45 and 55. And it is caused by the change in the balance of the body’s sex hormones. As women get older, their ovaries will gradually stop producing oestrogen and releasing an egg each month.

With menopause come symptoms like hot flushes, night sweats, vaginal dryness, discomfort during sex, difficulty sleeping, low mood or anxiety, reduced sex drive (libido), and problems with memory and concentration. And they begin months or years before your last period and can last around four years or more.

To reduce the impact of menopause, Lakhani says many specialists now believe that turning to a healthy diet is “the most important thing a woman can do”.

“Choosing a low fat, high protein diet is imperative. Studies have shown that a low ratio of protein in the diet increases bone loss and risk of fracture in postmenopausal women, so it is vital for those choosing a vegan diet to incorporate as much protein as possible,” she says. “Postmenopausal women have higher rates of heart disease, partly due to the lack of oestrogen. A vegan diet reduces the likelihood of the build-up of plaques in the coronary arteries.”

Lakhani adds that for women over fifty, it is believed that a vegan or vegetarian diet could make a difference in managing the symptoms and weight-gain related to menopause.

Anam Alam
Anam is a freelance writer for The Vegan Review and a student studying journalism. She is a passionate writer who possesses a range of skills ranging from audio, video, editorial and creative writing. Her goal is to educate the public and the world with stories that she feels need to be talked more about in society.
Previous articleOat milk sales pass soy to claim second in the US plant-based milk market
Next articleOne Planet Pizza and Better Nature collaborate to launch frozen tempeh pizza