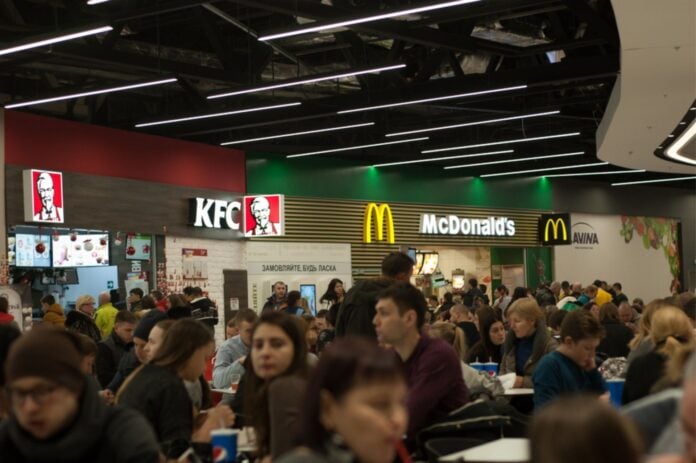 London’s vegan fast-food joints are proving a point by with offerings identical to popular chains like McDonald’s and KFC.

Everybody loves a burger packed with flavour and grease, even vegans. London’s vegan fast-food joints like Halo Burger and Temple of Seitan are delivering the messy junk food experience that made the big chains so popular, except their menu is cruelty-free and friendlier to the planet.

Compared to other cities, London seems to be the hub of vegan food jounts, as it was the first to rank 100 completely vegan restaurants in 2017 on HappyCow.

Since 2017, the vegan scene has only grown, bringing new restaurants with food offerings that are just as tempting as non-vegan ones. Veganism has been redefined by fast-food restaurants, proving that plant-based is not necessarily a synonym with healthy.

“We believe that the technology now exists to have that exact product completely vegan,” says Ross Forder, Halo’s founder. But can the menu of London’s little vegan burger joints stand up to the giants who have been in the industry for decades?

The McDonald’s menu offers few vegan options in the UK — chips, drinks and veggie dippers. But it is mostly famous for the big variety of cheap junk food fixes in the form of beef and chicken burgers.

McDonald’s promises it’s environmentally conscious and is “constantly working on ways how to be more sustainable”. “By rethinking, reducing and recycling, we’re minimising the impact we have on the environment. We’ve made big progress so far, but we know there’s lots more to do,” reads a statement on the food giant’s website.

But the main environmental impact of McDonald’s lies in its patties, wrapped in signature soft buns. The diets of meat-eaters create seven times the greenhouse emissions as the diets of vegans. In fact, the meat, egg, and dairy industries produce a combined 65% of worldwide nitrous oxide emissions.

So, while the packaging might be sustainable, the contents wrapped in the brown paper bag with the McDonald’s logo are not.

Halo Burger opened in 2018 as the “UK’s first 100% plant-based bleeding burger joint”. It offers all the McDonald’s classics, from the cheeseburger and hamburger to more sophisticated burgers like the Quarter Pounder. The menu also features vegan chicken nuggets, chips, dipping sauces, ice cream and milkshakes.

Its menu is not only reminiscent of the McDonald’s one, but also a deliberate attempt to prove that veganism doesn’t mean taste-free.

“Part of our pillars is to show that you can get a delicious classic fast-food burger that tastes like the real thing,” says Forder. “Hence, we’re ripping off a well-known brand and looking at how we can make that vegan, just to make a point there as well.”

Serving the Beyond Beef patty packed in melted vegan cheese, gherkins and a special sauce makes for not just for a cruelty-free experience packed with flavour, but also one that uses 99% less water, 93% less land, generates 90% fewer greenhouse gas emissions, and requires 46% less energy than a beef burger.

The only thing that Halo Burger lacks compared to McDonald’s are vegan chicken burgers.

KFC vs Temple of Seitan

While KFC offers a vegan chicken burger on its menu with a Quorn fillet coated in herbs and spices, with a guarantee of no cross-contamination throughout the process.

Our team members use separate coloured tongs, chopping boards and storage units to make sure vegan ingredients don’t come into contact with meat,” a spokesperson for KFC told The Vegan Review.

But even with the vegan option, its domain remains, as the name suggests, fried chicken. That’s exactly what its sustainability policies revolve around.

“Everyone within the KFC supply chain must have sustainable sourcing policies for their feed and we mandate that they are compliant with the Soya Moratorium, which prevents deforestation in the protected Amazon Biome,” says the KFC spokesperson.

Wheat is the main ingredient for the vegan chicken menu at Temple of Seitan. It uses seitan, which is made out of wheat and water. The consistency of this plant-based meat is quite chewy, which makes it perfect for faux chicken.

Rebecca McGuinness and Patrick O’Shea founded Temple of Seitan, London’s first vegan chicken shop, after spotting a gap in the market when it came to cruelty-free fried chicken.

McGuinness used to work at KFC and missed the taste of meat when she turned vegan. Temple of Seitan allowed her to use her passion for making vegan junk food while showing people delicious chicken does not necessarily need bones.

Temple of Seitan’s menu is all about seitan, which is available as fillets, wings, burgers, buckets and wraps.

KFC is happy to see restaurants offering vegan food: “A bit of friendly competition never hurt anyone — it only helps us all be better at what we do.

“Most still love getting their fried chicken fix, but we have worked to provide options for all — as we want everyone to be able to enjoy the great taste of KFC and for there to be something for everyone.”

The portions at Temple of Seitan are not as big as KFC’s, but the variety of plant-based chicken options remains comparable. It also offers six different vegan chicken and beef burgers, with vegan cheese, sauces and toppings. On top of that, you can choose from coleslaw, fries with chicken or chipotle salt, and five different dips.

The main thing that makes vegan fast-food joints different is the sustainability and price of their products. Researchers from the University of Oxford found that plant-based diets can reduce an individual’s carbon footprint from food by up to 73%.

But sustainability comes with a price. While big chains like McDonald’s are able to keep the price of their cheeseburger at £0.99, Halo’s cheeseburger is priced at £6. KFC offers four pieces of boneless chicken dippers for £6.59, compared to Temple of Seitan’s two dippers for £6.

One of the reasons for this difference is the cost of vegan meat substitutes. Currently, Beyond Burger is priced at £5 for a 226g patty, while 1000g of beef mince costs £5.63.

Larry Praeger, the CEO of Dr. Praeger’s, has said that the reason why vegan meat alternatives are expensive is that “the supply chain for the ingredients used — such as yellow pea protein — are much less established than supply chains for traditional animal protein”.

Praeger also mentioned the probability of the price of vegan alternatives decreasing in the future, as the plant-based market grows and supply chains adapt themselves.

If the price drops in the future, little vegan joints like Halo Burger and Temple of Seitan — consistently working on improvement when it comes to options and flavour — might pose strong competition for the established fast-food chains.

McDonald’s did not respond to our request for comment.