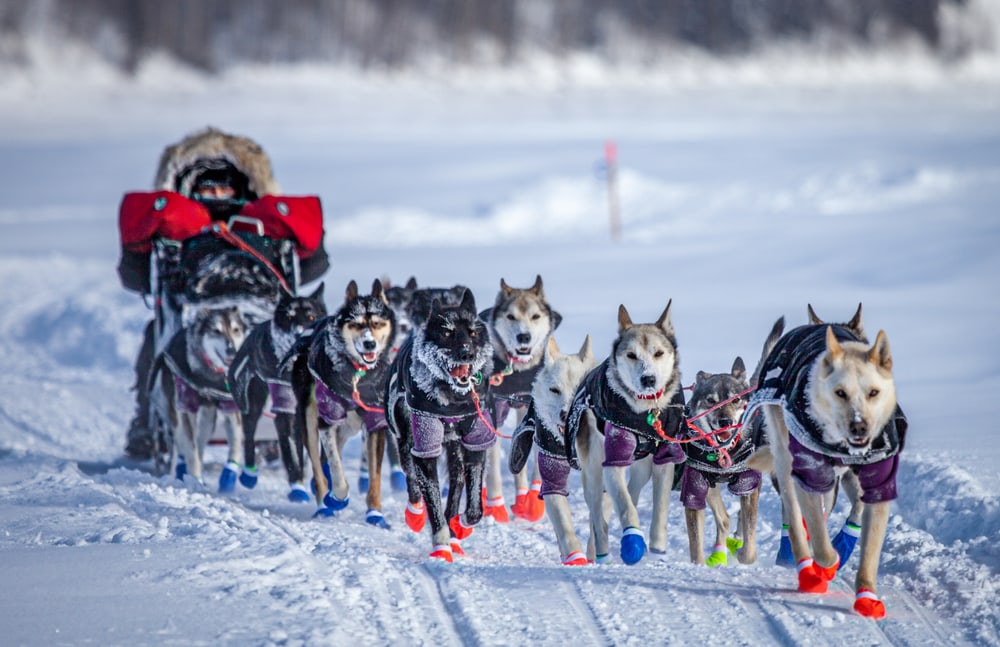 Dr Paula A Kislak from the Humane Society speaks to The Vegan Review about animal cruelty in Alaska’s Iditarod trail sled dog race.

Some enthusiasts call Alaska’s Iditarod trail sled dog race “the last great race on Earth”. The race was first organised in 1967 as a “centennial celebration of the Alaska Purchase”, with an arena of 40km that has increased to roughly around 1,770km now.

The race happens in the harsh sub-zero and whiteout conditions, and can attract around 100 top mushers (dog sled drivers) and their team of dogs. The race commemorates traditions of dog mushing. Although some call it a great race for its spectators, it often proves to be the last race for many of the dogs involved.

Hundreds of the participating dogs have died as a result of heart attacks, acute aspiration pneumonia caused by inhaling their own vomit, persistent lung damage and ulcers as a direct consequence of “endurance racing”. Others have died at the sled dog breeding compounds.

ExxonMobil is one of the major companies that sponsor the Iditarod race and PETA has launched campaigns petitioning them to stop doing so. PETA adds that “more than 220 dogs were pulled off the trail during the 2020 race because of exhaustion, illness, injury, or other causes”.

Dr Paula A Kislak, a relief veterinary practitioner, consultant and lobbyist for animal welfare issues, is currently on the board of directors for the Humane Society of the United States. She talks about the abuse and suffering the dogs endure by being forced to participate in the race.

Do you believe that the dogs participating in the Iditarod dogsled race in Alaska are suffering due to the races?

The training itself, without even racing, is very damaging. Authoritative veterinary medical journals state that in dogs that train as little as 100 miles (not the 1100 miles of the race), up to 61% of them get bleeding stomach ulcers that cause sudden blood loss, anaemia, and death. Since this study gave the industry a well-deserved black eye, they now try to suppress or hide this deadly outcome with strong medications that are merely treating the symptom, and not the underlying cause, which is the overstress and overwork of a profitable and entertaining but gruelling event.

Other articles in well-respected veterinary medical journals document dangerously suppressed immunity, life-threatening kidney damage, pneumonia, asthma, cardiac disease and profound hormonal imbalances. These can appear several days, weeks or months after the race, so the disability and deaths these dogs suffer never get recorded or even noticed.

The Iditarod Trail Committee only accounts for the deaths during the actual time of the race, and even that is a little sketchy. We simply do not know how many dogs die or are injured during their intensive and gruelling training for the race. Most mushers train their dogs as early as six months of age, before they are anywhere near fully developed, and in the remote areas of rural Alaska, where their activities cannot be monitored.

As part of their training, many mushers force their dogs to pull very heavy loads. The cartilage, bone, tendons and ligaments are not mature until at least two years and usually later. So it puts unbearable and unsustainable stresses on the organs and musculoskeletal systems, which is why so many wash out and get killed early. 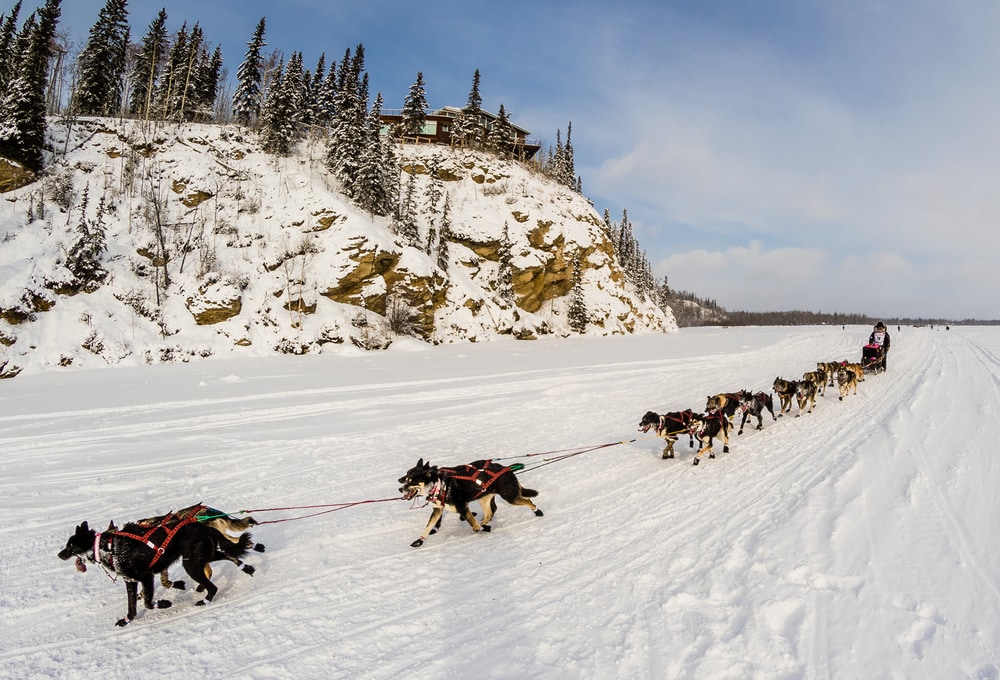 How do you think Alaska violates animals through the Iditarod sled dog race?

In general, these dogs are being forced to perform extreme and prolonged exercise that is not natural to their organ and muscle functioning. And of the reduced population who actually make it to the Iditarod, a full 50% fail to complete the race, with a majority of them suffering painful orthopaedic injuries, bleeding ulcers, and life-threatening organ failure. The Iditarod would be in direct violation of the anti-animal cruelty statutes against overdriving and overworking in the vast majority of the United States.

What would you say to people for whom the Iditarod sled dog race is a tradition that needs to be preserved and celebrated?

I don’t know when or why the race evolved into a torturous endurance event when it claims to honour the heritage of a much more humane event, the serum run, whose purpose was humanitarian, not profit.

I like to think that everyone knows that dogs don’t enjoy being beaten, whipped and coerced to perform until their organs and muscles and bones and heart decompose and fail. I like to believe that no one thinks it is okay to force them to run when they’re exhausted, sick or injured, but unfortunately, that is exactly what happens all too routinely because there are endorsements, prize money, lucrative gifts and bragging rights to be garnered. But none for the dog. All the dog gets in the end is a bullet to the head, if she’s lucky.

It is morally indefensible to create the entire industry based on profiting off the misery of dogs for entertainment. There is no room in a humane and civil society for animals to be used and abused for entertainment and sport. Dogs can’t give informed consent and do not profit or benefit the way human athletes like marathon runners and cyclists do.

What happens to the dogs who fall sick and aren’t able to perform on the races?

Since one-half of all dogs entered are incapable of finishing the race and must drop out, most with crippling orthopaedic injuries, bleeding intestinal ulcers and pulmonary haemorrhages, the remaining dogs must pull a heavier burden because dropped dogs cannot be replaced, and the additional consequences include the breakdown of the muscle tissue, which is toxic to the kidneys and liver, resulting in pain and death days or weeks after the race.

And because of the stress on the heart, there can be sudden heart failure or irreparable damage to the heart muscle, which itself doesn’t itself until after the end of the race, long after attention and awareness have faded.

Running as a team adds other dangers and risks. Even when the load is shared by the full complement of dogs at the beginning, it is never shared equally and being harnessed so tightly and in such close proximity puts unnatural dynamic stresses on their bodies, which are amplified and magnified over the gruelling distances. Ulcerations are common and it is not uncommon for dogs to get tangled and strangled in the tow lines, and lacerated or even impaled by the equipment. No amount of athleticism can protect them from being gouged or run over by a sled or a snowmobile (which has recently happened).

For the most part, the only dogs remaining after their ability to compete diminishes are the ones kept as breeding stock. They too live in abysmal conditions and have often developed crippling arthritis and pulmonary, cardiac and kidney conditions that severely deteriorate their quality of life but not their ability to breed and garner more income for their owners.

What’s your overall view on the Iditarod sled dog race?

No dog or person should be whipped and coerced to engage in an activity that causes many participants to suffer multiple essential organ failures and musculoskeletal orthopaedic breakdowns.

At least human athletes have the advantage of being able to give informed consent, and to reap the profit or reward for themselves. Humans typically choose to avoid running four marathons per day for 10 or 11 days in a row, but dogs do not have that liberty. Human They get to decide when to take a day off, how hard to push themselves, and even when to retire.

I respect and value Alaska’s wild and rugged nature. I have spent time there and in Greenland. I would like to see dogs employed in the activity of sledding only in the context of a partnership with people whose existence is dependent on them. When it is a respectful partnership, I believe the dogs would be valued in a way that would hopefully promote judicious and responsible breeding and humane housing and training. Speed and endurance competitions should be between people on ATVs and snow machines.