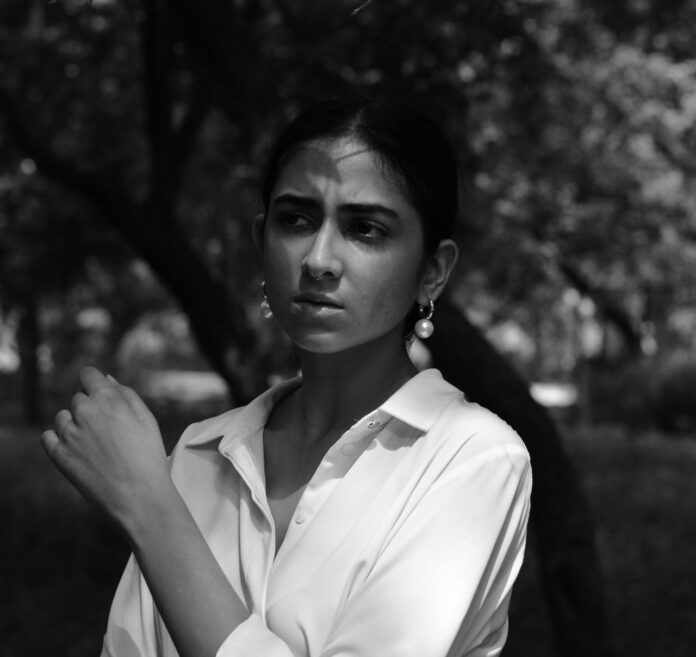 Indian photographer and vegan Kira Issar talks about her plant-based journey, its portrayal as an elitist lifestyle, and why she identifies as an ecofeminist.

Kira Issar is a New Delhi-based visual artist who identifies as an ecofeminist and follows a vegan lifestyle. Issar’s conceptual photographs derive their charm from the natural world. There is a oneness of nature and humans, leading to a peaceful coexistence of the two in her frames. They beautify each other. There is boldness in her simplicity and her representation of femininity.

Not only does she click some breathtaking photographs, Issar also advocates and educates people on veganism and the myths surrounding it, ecofeminism and the animal liberation movement. Her sensitivity towards the issue had sparked when she dropped out of the esteemed National Institute of Fashion Technology due to her unwillingness to work with leather.

Upon hearing the experiences of her seniors visiting leather factories, she knew there was something inherently wrong, and no amount of money would convince her otherwise. She moved on to pursue a triple major in psychology, English literature, and journalism instead.

Issar talks to The Vegan Review about what it is to be a vegan in India and what happens when you throw in religion and caste into the mix. She helps distinguish India’s popular cultural vegetarianism from veganism. She also talks about her tryst with ecofeminism, her art, and her inspirations.

What led you to turn vegan. Was there a turning point?

I ate meat, dairy and eggs for 22 years of my life and gave it absolutely no thought whatsoever until a close friend I went to college with went vegan and became an animal liberation activist. My initial reaction to veganism were shallow jokes, childlike rebuttals, and avoidance of all the facts and graphic content.

My then-partner shared the same dislike for veganism. However, he wasn’t somebody who ever avoided facts; he believed in thorough research. Over time, one fine day, he told me he’d consider going vegan in the future — for animals and the environment. I laughed hard and told him it was still a no for me, but that moment injected curiosity in me to inquire into veganism, which led me to watch some documentaries, going over various arguments and studies.

A day came where I looked in the mirror and saw only a hypocrite. How could I claim to have reverence for nature or love for animals, knowing all that I know? Over the year, my partner and I began transitioning to more plant-based food. When I returned to Delhi, I went vegan.

Have you faced any sort of criticism by people or been told that it is an elitist lifestyle to adopt in a country like India, where caste and religion play a huge role?

Yes, I have. First: poor vegans exist, and do not deserve to have their contribution to animal liberation erased or be used as shields for privileged people to maintain their oppressive behaviour. In fact, the poor in the country largely consume a plant-based diet — not out of personal choice, but merely because plant foods are among the cheapest available foods in the country, and are subsidised by the government. Relief kits for the poor during any crisis in India contain essentials like atta (wholewheat flour), rice, lentils, oil, sugar and tea. NGOs are another example that work with oppressed humans that tend to serve largely plant-based/vegetarian meals.

The association of veganism as ‘elitist’ stems from the perception of veganism as white veganism or vegan capitalism, wherein it’s seen as a completely Western creation, with fancy expensive supermarket products. Such a perception is false; packaged vegan products aren’t available here or are extremely expensive. Vegans usually stick to veganising their cultural dishes by cutting out or replacing dairy/animal flesh.

Vegans and vegan activists of all religions exist in India. However, veganism is often misunderstood/associated with cultural forms of vegetarianism (like Brahmanical and Jain vegetarianism) in India. Cultural vegetarianism exploits animals and attaches a belief of ‘purity’ to vegetarianism, whilst labelling meat as ‘sin’. It’s followed as part of one’s culture. Whereas veganism attempts to boycott animal suffering as far as practicable or permissible and doesn’t attach labels of purity or sin. Most vegans are prior meat-eaters who simply became aware of animal exploitation. It is practised as a social justice movement in protest of the commodity status assigned to animals.

What about the problem of accessibility?

Our food systems are flawed not only because of animal agriculture, but also various socio-political-cultural forces that mingle with one another to perpetuate food insecurity. It’s necessary to create awareness in order to realign policy, consumption and cultural outlooks to ensure greater food security and accessibility. Like most social justice movements, veganism is about checking one’s privilege in relation to a specific form of exploitation and then doing their bit to help.

Your artwork, especially your photographs, seem to involve a lot of natural elements. How have environmentalism, veganism, intersectionality and activism affected your art? Do you strive to make your art more impactful in that regard, to send a message?

Plenty of people bring up this observation of my photographs — but I’m unsure if it’s intentional. It just happens to happen. I photograph subjects with the elements I’m attracted to. I don’t consider myself an activist because there’s no organised action I have taken up yet. I simply identify personally and politically as ecofeminist (constructivist), which in itself is comprehensively and consistently anti-oppression. None of the work I have put out yet expresses my stances explicitly, but I am in the process of working on two personal projects with the themes of animal exploitation and ecofeminist theory. I look forward to unveiling them once I get around finishing them.

Can you elaborate on your experience of being an ecofeminist in a country like India, and its scope here?

Ecofeminist theory is an outgrowth of many fields of feminist inquiry: anti-nuclear movements, women’s healthcare, peace movements, animal rights, labour movements, environmental movements, etc. Its basic premise is that the same ideology that authorises oppression based on race, gender, class, caste, physical abilities, species, and sexuality is the same ideology that sanctions the oppression of nature. Ecofeminism calls for an end to all oppressions, arguing that no attempt to liberate any oppressed group will be successful without an equal attempt to liberate nature.

A consistent anti-oppression stance is thus vital in ecofeminism. Ecofeminist literature takes up the task to reveal the underlying psyche of oppression and violence towards human and non-human nature. I don’t know anybody who identifies as an ecofeminist, although in India, I’m aware of Vandana Shiva’s work in the field. I think it’s a worthwhile feminist theory that’s been sidelined with predictable patriarchal criticism. It could be very relevant to India because it emphasises an ethic of interconnection, not fragmentation. India’s a country with a lot of cultural and social fragmentation.

Which books and artists helped you solidify your beliefs and lifestyle choices?

Beasts Of Burden: Animal and Disability Liberation by Sunaura Taylor

Zoopolis: A Political Theory of Animal Rights by Sue Donaldson

Sapiens: A Brief History of Humankind by Yuval Noah Harari

Annihilation of Caste by BR Ambedkar

The Sexual Politics of Meat by Carol J Adams

Veganism in an Oppressive World, edited by Julia Feliz Brueck