Jaanvi and Paavani: The Indian sisters celebrating a zero-waste Diwali 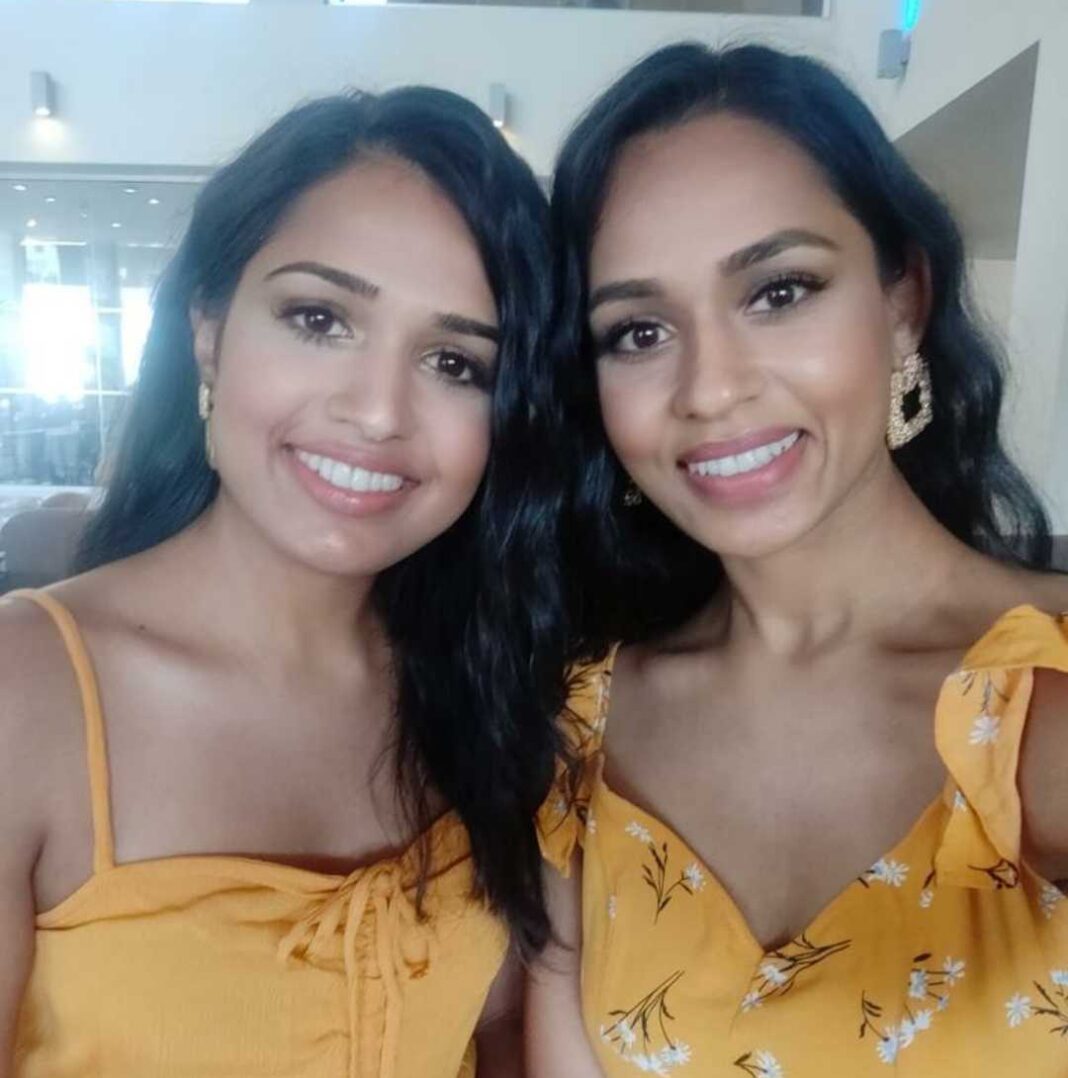 Jaanvi and Paavani on embracing their Indian culture in a sustainable manner, advising followers to celebrate zero-waste Diwali and creating their Eco Rakhi.

Diwali is a new year festival about new beginnings. Streets and buildings are decorated with lights, cards are sent, and gifts are exchanged. Special food and sweets are enjoyed, Rangoli is created and fireworks are part of the celebrations. The celebration is not entirely sustainable, but sisters Jaanvi and Paavani have prepared many ways to be more eco-friendly and zero-waste, adapting the traditions of Diwali, which is on November 14 this year.

The two sisters work in healthcare but are interested in advocating sustainable living. Paavani says: “Our aim is to inspire a change in behaviour for the good of the planet, animals and people.” Prior to the pandemic, they would visit schools to raise awareness about the growing environmental concerns the planet faces and what the younger generation can do to help.

Out of the duo, Paavani is vegan and she started her journey two years ago. She was recommended by a friend to watch the film Okja, which is about a girl fighting to stop her best friend from being slaughtered. She explains: “One specific scene was all it took to flick the switch for me — when the girl’s grandfather labelled meat cuts on an illustration of Okja.” This resonated with her relationship with her cat and how she saw herself as the little girl in the film, watching her care for this animal.

“This film made one thing quite clear: Okja, whether it’s a pig, a cat or any other animal, should be just as important as my cat is to me. How could I love one, but eat the other?” From this moment, she stopped eating meat and became vegetarian overnight. This then came with education surrounding veganism; reading into animal exploitation and having the “realisation that animals are here with us, not for us”.

Read our story on how films like Okja and Babe inspired the vegan message.

The transition didn’t come easy, as Paavani, prior to watching the film, would consume meat in almost every meal every day. She spent the majority of 2019 cutting out dairy and eggs and became an ethical vegan in the new year. She adds: “Okja was the moment that has honestly shaped my entire life — without that film, without making that connection, there would have been no realisation, no awakening.” 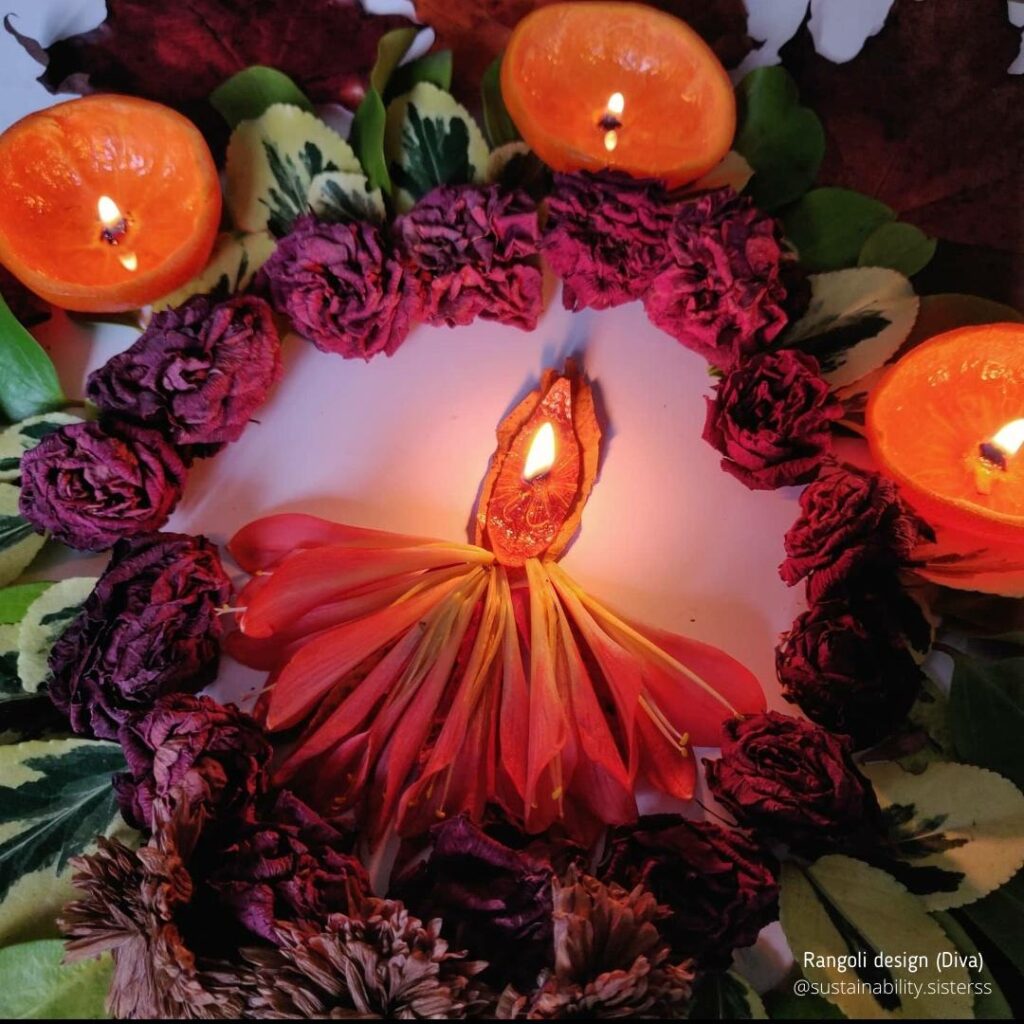 The sisters decided to create their Instagram page as a platform for children, parents and teachers to refer back to for educational resources. They touch upon unusual topics such as how most teabags are made of plastic, how chewing gum contains plastic and how you can use your hair after a haircut to help clear up global oil spills. However, they also share how to celebrate many aspects of their culture sustainably.

This year, they have decided to promote celebrating Diwali, the Indian festival of lights, with zero waste.

One major tradition of Diwali includes lighting diyas, symbolising the transition from darkness to light. It also links to the story of Rama and Sita, as part of welcoming them home after the battle against the demon king, Ravana.

The sustainability sisters suggest using orange peels instead of traditional candles as diyas. “Traditional diyas are made from paraffin, which is derived from petroleum, a fossil fuel. Crude oil, being the origin of paraffin wax, is also considered highly unsustainable.” On their page, they touch upon how they can cause damage to natural habitats and climate change. Using orange peels has allowed them to create a simple, sustainable method that can replace diyas.

They are also using fallen flowers and leaves as Rangoli. Rangoli is an art form seen at Diwali whose purpose is to enlighten and welcome the Hindu gods into the household. It is a type of decoration drawn on the ground or in front of a house.  Traditionally, Rangoli is made from chemically coloured powders, glitter and sparkly plastic decorations and can have damaging effects on the surrounding environment.

“Rangoli can be eco-friendlier if you use natural food grains and powders,” explains Paavani. However, she also reflects on food shortages in the world and thus doesn’t promote this way of creating Rangoli. So this year, they are creating Rangoli designs by utilising dried flowers and fallen leaves from their gardens.

The sisters don’t think fireworks “are worth the significant harm they cause for their short-lived visual enjoyment”. Paavani says: “We will not be doing any fireworks, sparklers or bangers this year, or any other year, for that matter.” 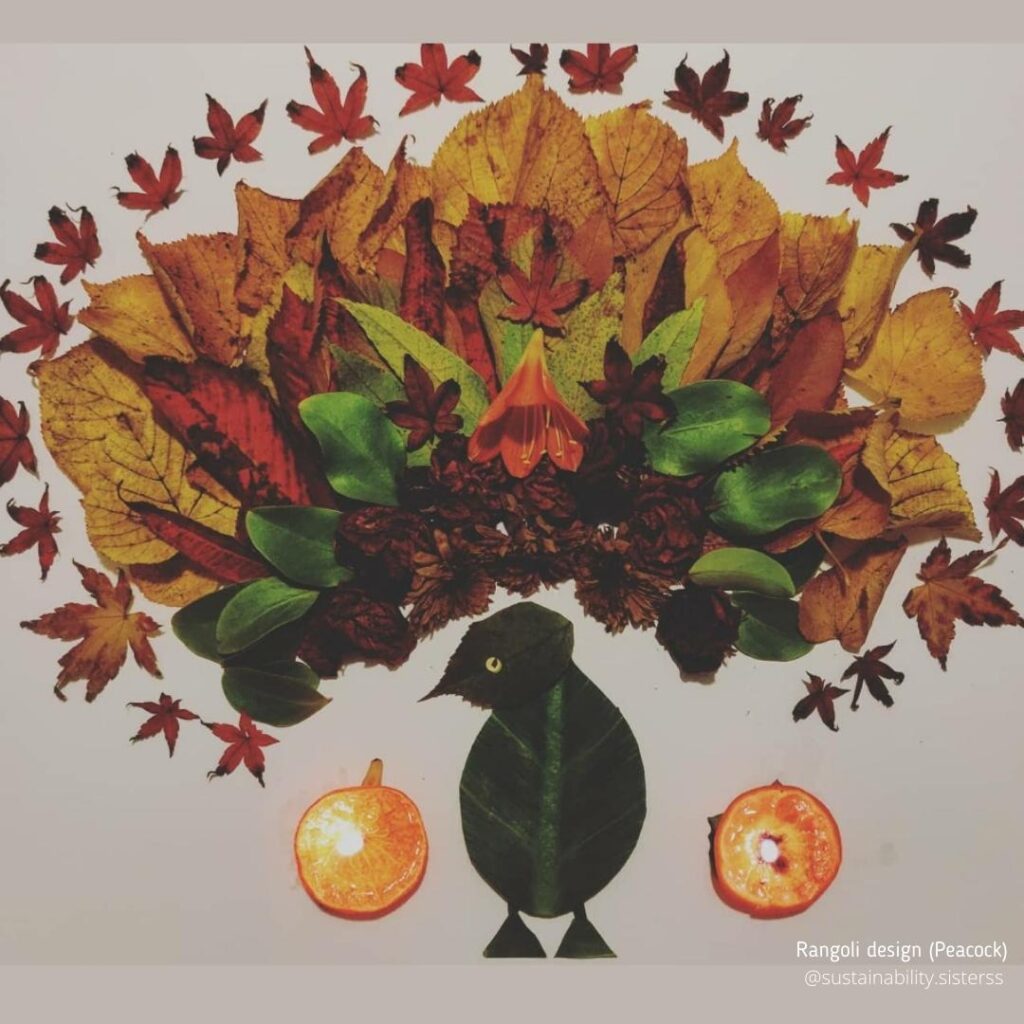 Additionally, during the festival, families consume mithai (Indian sweets). Although they can be made vegan when gifting to friends and family, the packaging is not sustainable. And so, the zero-waste sisters suggest using compostable and reusable containers for these Diwali treats.

Paavani explains that although she fully embraces her culture, the festivals and traditions, which resonates in their posts, she is not at all religious. In fact, she is an atheist. “I find myself having conversations with family members especially about certain ‘religious norms’ and how they don’t align with the teachings of non-violence, peace and compassion.”

She touches upon going to the temple and how cows are known to be the most respected animal in Hinduism, and yet the product of their exploitation is used in foods and offerings at the temple, a place of peace.  “I know some may argue that people have been doing it for thousands of years, but still, that doesn’t make it right,” she says.

A quote she goes by is one from the astrophysicist Herbet Reeves: “Man is the most insane species. He worships an invisible God and slaughters visible nature. Not realising that the nature he slaughters is the invisible God he worships. Nevertheless, they enjoy celebrating the traditions, but only in a manner that is healthier for the planet.”

Apart from celebrating a zero-waste Diwali, earlier this year, they also created the vegan Eco Rakhi for the Hindu festival of Rakshabandhan. It celebrates the bond between brothers and sisters, a cultural tradition that originated in Hinduism but is now prevalent among many other cultures. On this day, sisters tie a Rakhi (thread) around their brothers’ wrists, binding them to love and protect each other. Its literal meaning is “the knot of protection”. 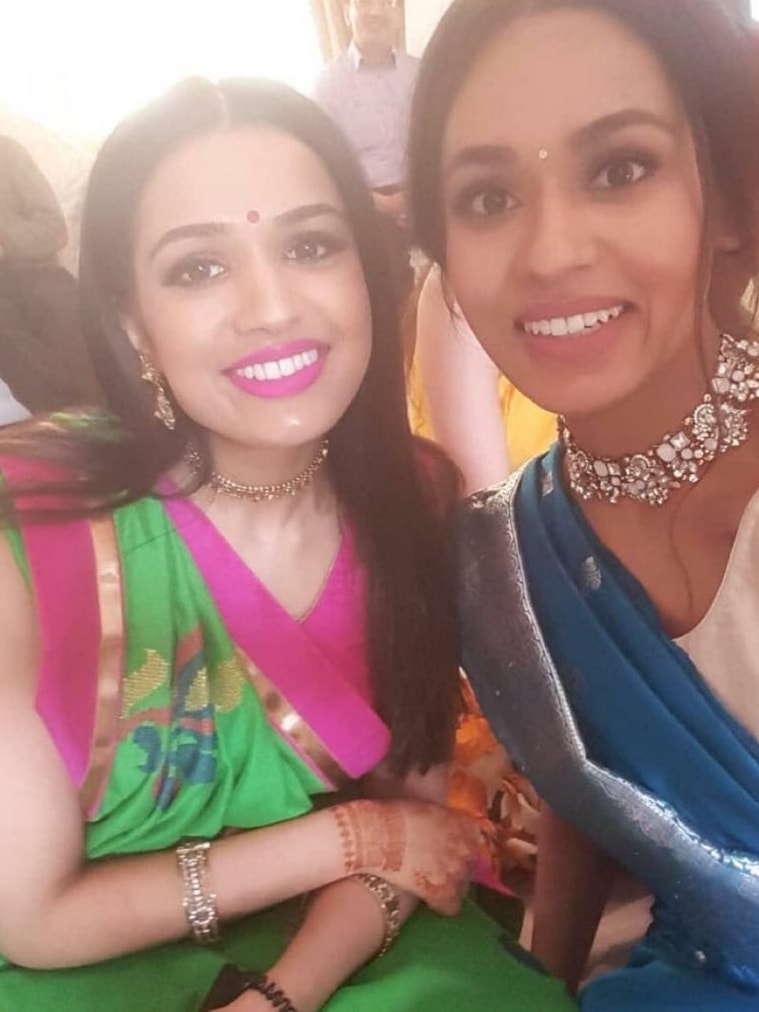 During a beach clean in Mauritius, they saw firsthand the level of harm caused by celebrations like these. She explains: “Hundreds of Rakhis and ritual items — even religious idols — were lying on the beach either washed up to shore or waiting for the tide to come in to take it all away. We couldn’t help but think of the damage this would cause to marine life and other connected ecosystems.”

This then opened their eyes and they decided to create the Eco Rakhi, as these were not available in the UK. Usually, Rakhis are decorated with heaps of glitter, plastic beads, metallic threads and made from synthetic materials like nylon. Paavani says: “During the process, we saw an alarming statistic that made us think: ‘It is estimated that over 600 million people celebrate Raksha Bandhan each year, and every year around 620 million used Rakhis are placed into our environment as an offering. Whether it’s directly into rivers, lakes, oceans or even into the earth’s soil, they will never truly go away.’”

Their Eco Rakhi is plastic-free, compostable, vegan and sustainable, and is made of hemp twine and a Rudhraksh seed. They also send them with plantable paper (containing a mix of flower seeds), so once the Rakhi falls off, they can be planted with the paper to ‘let the love grow’. These will, in turn, attract important pollinators like bees whose populations are under threat. By making the Eco Rakhi, they have addressed a few key environmental concerns, such as plastic pollution and microplastics, threatened bee populations, and the unsustainability surrounding fabrics and dyes used in the fast fashion industry.

Their purpose is to have created something that aligns with a circular way of living. “At the moment, as a society, we do things in such a linear manner: we buy something, use it and then dispose of it,” explains Paavani. “Whereas, as soon as we’ve finished using something, we should be thinking about upcycling, recycling, reusing and repurposing that item, giving that item another life.” That’s an aspect they achieved with their zero-waste Eco Rakhi, which they hope to replicate with their Diwali advice.

As a sustainable duo, and with Paavani being vegan, she says: “I aim to see animals as your equal, see nature as your religion.” 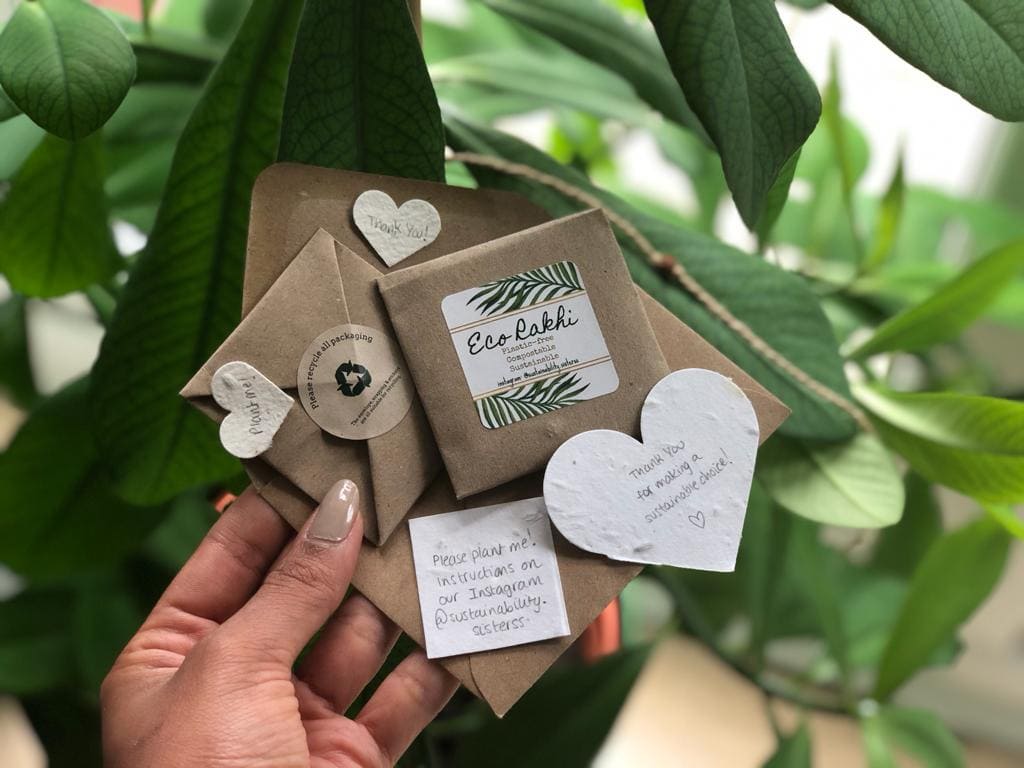 However, when she was travelling, she met someone with a tattoo on their forearm, and was massively moved by it when asking what it meant, encompassing and summarising her values as a vegan. “The saying was ‘Lokah Samastah Sukhino Bhavantu’. I was told it’s Sanskrit for: ‘May all beings everywhere be happy and free, and may the thoughts, words, and actions of my own life contribute in some way to that happiness and to that freedom for all.’ For me, that’s the most powerful thing anyone could wish for, and I love this saying because it’s just so universal.”

She adds: “It’s about all beings we share this planet with, not humans just well-wishing for humans. This saying encompasses every single life,” and believes this can be reiterated when celebrating festivals such as Diwali in a zero-waste and eco-friendly manner.

Mansi Vithlani
Mansi Vithlani is a journalism student at City, University of London. A vegetarian her whole life and a massive foodie, she enjoys discovering more about veganism and eating vegan cuisine! She enjoys investigating social media based stories and how its influence has made a significant difference in the last few years.
Previous articleExclusive: Vegan frozen delivery service Frozenly from the makers of Fravocado
Next articleWorld Vegan Month: Being plant-based in South Africa