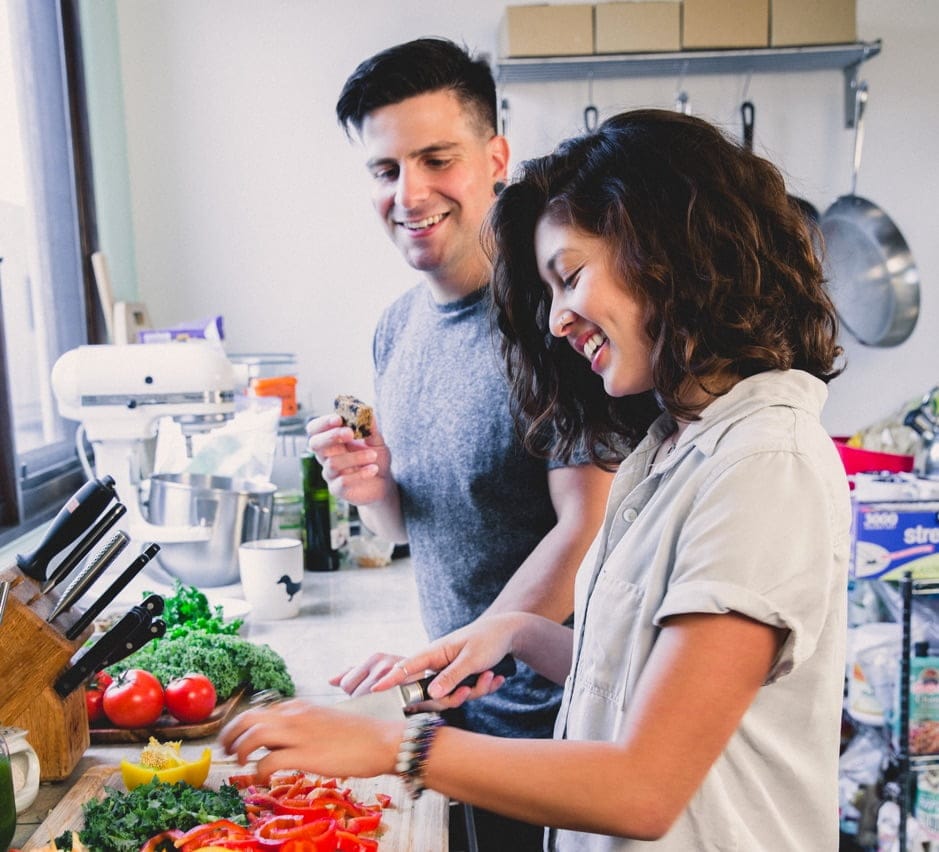 Vegan couple Jasmine Briones and Chris Petrellese on their relationship, veganism, and helping their fans achieve a sweet and simple vegan lifestyle.

Jasmine Briones and Chris Petrellese are both vegan influencers whose paths crossed at a vegan event. Both of them had been on individual journeys before collaborating to build their vegan social media brand, Sweet Simple Vegan.

Briones, the face of Sweet Simple Vegan, transitioned to veganism in 2012 while in college. “Initially, I found it as just a diet, I was just looking for a way to lose weight and I was actually struggling with an eating disorder at that time,” says Briones. Feeling lost and helpless, she trialled veganism to help with weight loss and take back control of her diet. And while going vegan was not a positive experience for her at first, she says it helped improve her health and nutrition. 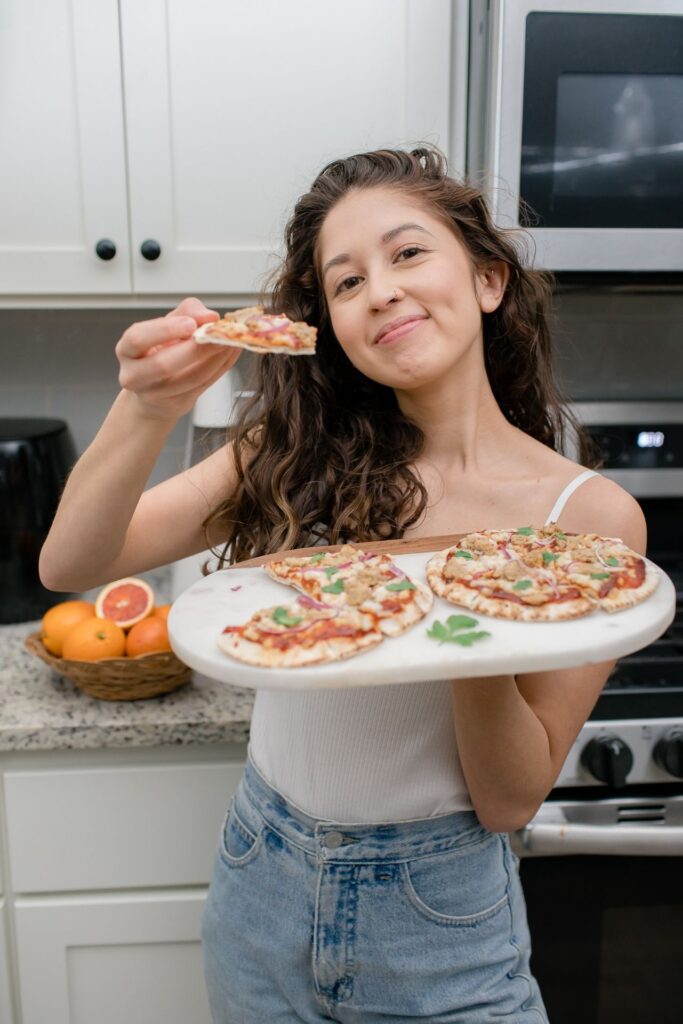 She later started to engage more with veganism, recognising the positive impacts on her health, the environment and animals. She says: “I just realised that it was so much more than a diet. On my road to recovery, I decided to go vegan but for a completely different reason than before.”

Coming from a Filipino-Ecuadorian background, it was difficult for Briones to adapt to a meatless lifestyle; a lot of the cuisine she had previously eaten contained animal produce, like fish. However, after learning more about the ethical sides of veganism, she says: “I don’t really look at it as something that I want or crave or would enjoy.”

Veganism allowed Briones to regain control of her health but also set a career path for her as a vegan influencer. She posts food content on her Instagram page, blog and YouTube channel, and although it started as a hobby, she has grown her own community of plant-based fans.

Petrellese, known as Conscious Chris, decided to try a plant-based diet in his early 20s after being inspired by a friend also attempting veganism. Canadian punk band Propagandhi, which provided information about veganism inside its album covers, served as another influence for him.

Petrellese initially went vegetarian but made the full transition after watching Gary Yourofsky’s The Best Speech You’ll Ever Hear three years later. Trying out veganism made vegetarianism appear hypocritical to Petrellese. “I believed eating meat was wrong, then eating cheese, eggs and everything else didn’t really align or make sense,” he says.

He started publishing food-related posts on his Instagram page. One of the photos received 100 likes, so he kept posting regularly and then eventually created a blog. Focusing on vegan junk food, Petrellese posts a range of “heavy, like sandwiches, fast-food style, kind of lazy, throw-it-together cooking”, whereas Briones is a “little more curated, with well-thought-out, happier and healthy-ish meals”.

Veganism led to the pair finding each other and also improved their ability to build their plant-based social media platform. “We actually met at a vegan party,” says Briones. In 2015, Briones, as a blogger, and Petrellese, working for a vegan company at the time, went to a brand event hosted by Field Roast, which was launching its new vegan cheese. They met on the balcony, bonded over their love for veganism, sparking both their relationship and collaborative work.

The pair have been collaborating for several years on the Sweet Simple Vegan YouTube channel and blog, curating their easily accessible recipes. Their most popular videos are eating in fast food chains or going into large superstores, reviewing and documenting their experience with the vegan cuisine.

Briones says: “I feel like they’re the most helpful for people, especially people who are new to veganism and not experienced in the kitchen.” As the name implies, they aim to share the easiest recipes and methods to help with going vegan and, ultimately, pursuing it full-time. They also share content on how to eat and buy vegan at common restaurants and different grocery stores.

Reflecting on some of the more personal impacts of Sweet Simple Vegan, Petrellese says: “We were hanging out with some people we went on a hike with last weekend and their son, who I think is 7, is in second grade. He watches our videos and now he wants to be vegan and featured on our channel, which is crazy.” 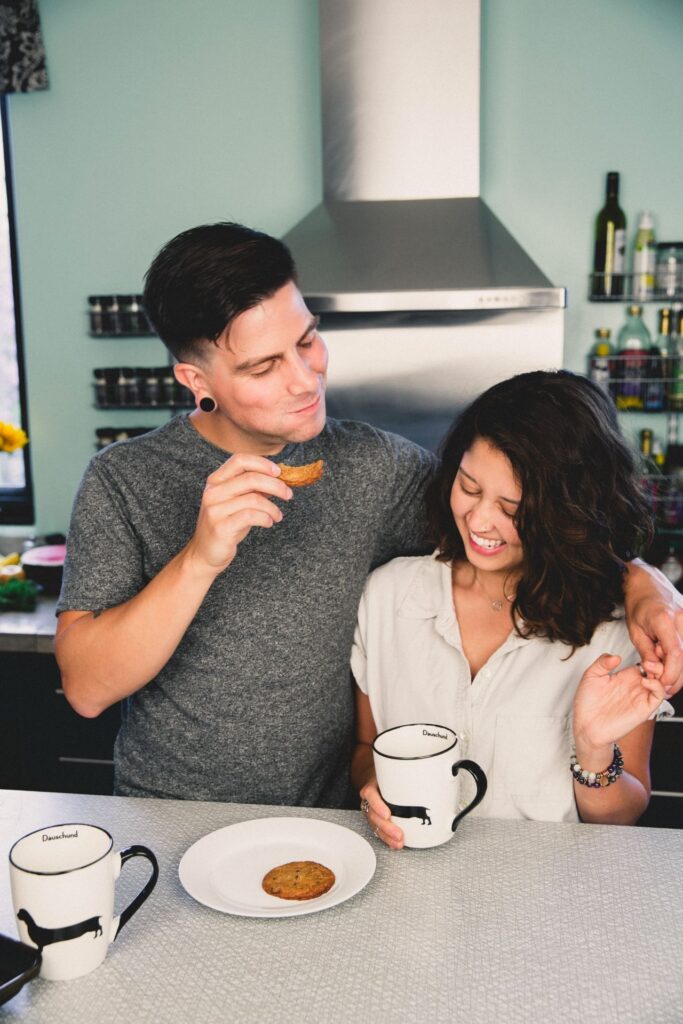 The pair have tried to promote the fact that veganism is not a “crazy concept”, but a lifestyle that people can “live consciously for themselves, the animals and the planet”.

We touch upon the future of veganism and how more products are becoming accessible. From lab-grown meat to cheese, Petrellese thinks things may become “weird” in the industry, but in a positive way. Briones explains: “We saw that there is vegan dairy ice cream now, which is interesting. I don’t know how I feel about that. I don’t know how my body would feel about that. But it’s really cool that those things are coming to be and they are going to benefit the planet.”

The couple is hoping to take the next step and launch their own cookbook. “I’ve always dreamt of doing that and that’s something that we really want to lock in, hopefully by the end of the year, but who knows?” says Briones. Another audience they hope to target are non-vegans dating vegans; they aspire to encourage them to try out veganism with their sweet and simple approach.

The pair have been on quite the vegan journey, both separately and together through their collaborative platform. Petrellese says that veganism is like an “exponential bell”, which he’d “like to see hit the mainstream more”. 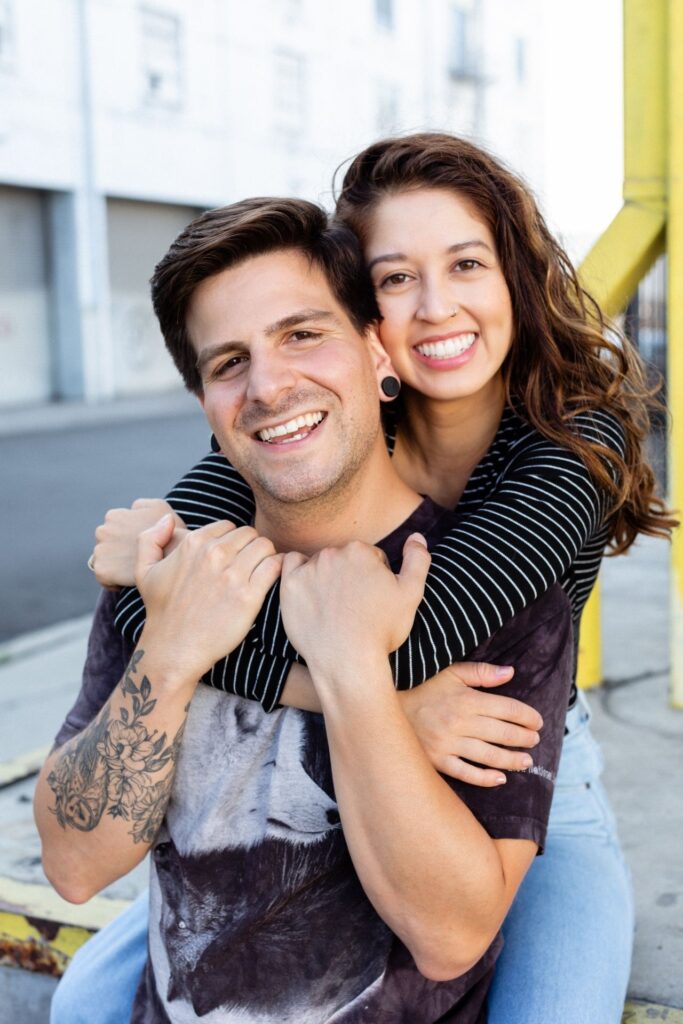 Initially, Petrellese focused on animal rights, but over time has connected it to the analogue with human rights. “’It’s interesting how vegans can feel one way about animals but not the same way about humans. It’s definitely been eye-opening over the years to see the connection in that,” he explains.

Briones’ journey has admittedly been tough; she was hard on herself and felt she was messing up if she did something wrong. She adds: “When I first went vegan, I was very focused on just one cause. I’ve kind of put down those binders and realised there are so many other causes that we need to be focusing on to help benefit the world as a whole.”

Mansi Vithlani
Mansi Vithlani is a journalism student at City, University of London. A vegetarian her whole life and a massive foodie, she enjoys discovering more about veganism and eating vegan cuisine! She enjoys investigating social media based stories and how its influence has made a significant difference in the last few years.
Previous articleSecond Hand September: Influencers ditch fast fashion and encourage sustainable shopping
Next article16% of ready meals in UK supermarkets are vegan, finds new study