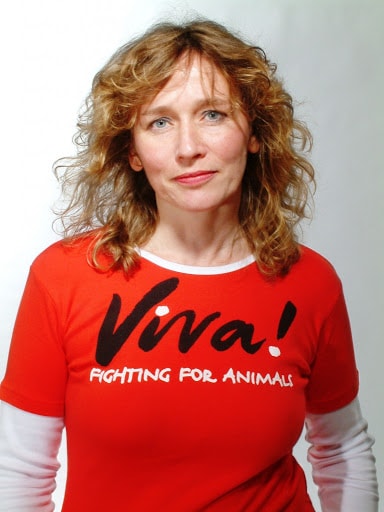 Juliet Gellatley, founder and director of Viva!, talks about the charity’s campaigns and missions, and the harsh reality of factory farming.

A staggering 70 billion farm animals are raised for food around the world each year, and the number is expected to continue rising. Approximately two out of three are reared in factory farms. The horrors of factory farming are often overlooked and they continue to exist and operate without much legal intervention.

There are several organisations and individuals raising their voices so that the voiceless can be heard. One of these organisations is the vegan NGO Viva!, which fights against the atrocities that factory farm animals endure by launching campaigns to expose factory farms and the way they treat animals.

Juliet Gellatley, founder and director of Viva!, stands by veganism and hopes to see a vegan world one day. Viva! has four main focus areas: animals, health, the planet and lifestyle. They specialise in undercover operations that aim to show the world the animal cruelty taking place in factory farms and the detriments of factory farming.

One of these operations can be seen in End Factory Farming, a short film released for World Vegan Month, exposing one of Britain’s pig farms. The film uncovers the way this farm treats the pigs; starving them, keeping them in unsanitary conditions and ultimately leaving them to suffer and die. Gellatley talks about the motivations behind Viva! and the negative effects of factory farming.

What inspired you to start the Viva! charity?

When I was in my early teens, I discovered the horrors of factory farming. I wangled my way on to a ‘mega’ pig farm and witnessed the sheer scale of animal suffering — rows upon rows of pigs confined to cages, gnawing on their metal prisons.

There was one particular pig that has stayed with me forever. At the end of a row of sow stalls, there was a large boar who dragged his exhausted body towards me. He looked straight at me, his sad, deep eyes staring into mine. At that moment, I knew I would dedicate my life to saving animals.

Ten years later, I was campaigning nationally on vegetarianism. We were really making waves and starting to gain traction. But it wasn’t enough — I wanted to campaign loud and proud on vegan issues, with a focus on undercover investigations. So, I decided to launch my own vegan charity, and in 1994, Viva! was born.

How does Viva! promote veganism and how effective have the campaigns been?

Viva! Planet highlights how livestock is destroying our planet. We do this in a variety of ways. First, we launched Envirocidal, our landmark report, which presents the latest scientific research into animal agriculture and environmental destruction. Next, we launched Vegan Now! This was our headline environment campaign, fronted by Michael Mansfield QC, which brought together leading scientists and politicians to urge the public to go vegan.

The campaign launched with a powerful video and a press launch at the Labour Party Conference. It was accompanied by a large social media campaign and was in every national newspaper. Plus, we did radio and podcasts, allowing us to reach as many people as possible.

As reality stands, there are meat-eaters in the world whose needs have to be met, so for the time being, what do you suggest is the best way to meet that demand?

Our focus is (and always has been) on showing people that vegan diets are quite simply better for the environment, your health and the animals. Our campaigns highlight how simple, tasty and affordable veganism is.

Now more than ever, it is incredibly easy to go vegan, and so we encourage meat-eaters to explore the wide variety of vegan options out there. From plant-based milks, to traditional tofu dishes, to the newer meat alternatives, there is something for everyone.

We won’t create a vegan world overnight. But by encouraging people to make small steps and lobbying for governmental change, we will get there. The government plays a key role in creating change and it falls to them to eradicate our reliance on unsustainable animal agriculture.

We urge the UK government to end factory farming and to support plant-based food initiatives and provide incentives for farmers to transition from animal to arable farming. This will, in turn, meet the changing demands of our population.

Free-range farming is equally as bad as factory farming. Could you further explain as to how that is?

We are often told by celebrity chefs to keep livestock outdoors: eat free-range. But all this does is to swap one disaster — mass cruelty — for another: mass destruction. Animal farming causes environmental damage and free-range is the most disastrous for the environment.

The reason is inefficiency. Grazing is mind-bogglingly wasteful. Roughly twice as much of the world’s surface is used for grazing as for growing crops, yet animals fed entirely on pasture produce just one gram out of the 81g of protein consumed per person per day.

A paper in Science of the Total Environment reports that “livestock production is the single largest driver of habitat loss”. Grazing livestock eat tree seedlings and the land they are kept on becomes the equivalent of green concrete, squeezing out wildlife, exacerbated by the slaughtering of livestock’s large predators. The fires that rage across the Amazon are a very real and terrifying example of the damage caused by free-range beef production.

In the UK, when people imagine free-range farming, they think of big, open fields with lots of grass and freedom for the animals to express their natural behaviours. Sadly, as Viva! has shown time and time again, this is often not the case.

Let’s take egg-layers, for example. Even on free-range and organic farms, the chickens are often confined to dark, barren sheds, with thousands of chickens packed together and only small pop holes allowing outdoor access. The chickens will still be ‘debeaked’ and the male chicks are still killed in their thousands as ‘useless byproducts’. This is far from the ‘free-range’ idyll that is painted on packaging.

Even the few who live on smallholdings with more enrichment are still exploited and killed for food. All farmed animals are inhumanely killed against their will in slaughterhouses — there is no such thing as humane slaughter. The only ethical choice is to go vegan.

How would you lobby the government to end factory farming in the UK?

Viva! is a consumer campaigning group, and that is our main focus: changing individual’s hearts, minds and stomachs.

However, we’re currently lobbying the UK government to End Factory Farming Before It Ends Us, including with an open letter to Boris Johnson. We are calling on the government to support plant-based food initiatives and transform our food system.

Factory farming poses a huge risk of future pandemics and the plethora of health problems concerned with eating meat. Not to mention the current environmental crisis that is fuelled by mass animal agriculture and the global scale of animal suffering at the hands of the intensive farming industry. Through our open letter (which can be signed here), national media coverage, and nationwide demos — with support from MPs — we are putting pressure on the government to change.

We’re also building momentum to ask the public and industry to call for public policies favouring the production of plant-based foods instead of expanding animal agriculture.

How would you persuade people to start their vegan journey?

Everyone is different but, in my experience, the best way to persuade people to start their vegan journey is simply to show them where their food comes from. Our investigations have a huge impact in creating new vegans, as the public rarely sees what really goes on behind the factory farm walls. Increasingly, we are seeing people go vegan for their health or for the planet, and so it’s important to discuss these issues too.

Next, lead by example and show how easy and delicious vegan food is. We recently launched a new seven-day vegan meal plan called V7, which is designed to help people make the transition to veganism. Each day, you get three simple and delicious recipes as well as a complete vegan shopping list and lots of vegan tips.