Kerry Foods’ new range of vegan products has been a hit with consumers since launching back in September 2019. Naked Glory’s debut range featured sausages, mince, quarter pounders and no-meat balls, all of which have been subject to high praise for their authentic meat-like taste and texture. 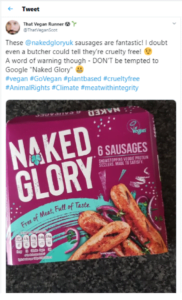 Naked Glory’s success has encouraged the Kerry Foods to invest in expanding their selection, adding meat-free Chicken Tenderstrips. They introduced three different flavours: Roast, Tikka and Smoky BBQ at the beginning of this month.

Their products are made from rehydrated textured soy protein, wheat protein and natural smoke extract to achieve a barbecue flavour.

Some plant-based alternatives are criticised for being high in fat, but this is not the case for Naked Glory. Compared to the average pork sausages, Naked Glory sausages contain 75% less fat and their mince contains 60% less fat than the average beef mince.

Rehydrated soya is made from the part of the soybean that’s leftover when the beans are turned into soybean oil. When rehydrated, soy protein has a texture like cooked ground beef.

The products are priced at £2.75 per pack and can be found on the shelves of supermarkets including Tesco, Sainsbury’s, Asda and Morrissons, with the promise of more upcoming stores.

The range has also been approved by The Vegan Society as a product that is free from animal ingredients and testing.

Kerry Foods is known for big brands like Strings and Things, Denny, Richmond and Dairy Gold. However, they are trying to be mindful of sustainability and animals.

‘’We also understand that Animal welfare is a key concern for our customers and consumers of our meat products,’’ says Kerry Foods.

Kerry Foods chose the name naked to emphasise that their products are meat-free and glory ‘’because our food is gloriously gorgeous’’.

Veganism is blooming in the UK with a 400% increase over the last two years. 14% of the UK class themselves as vegetarian and another 31% say they are actively eating less meat. To supply the growing demand, more businesses are investing in vegan products.

Research from Kantar shows that 4.4 billion meat-free dinners were consumed in the UK in 2018. Kerry Foods has joined this trend of producing authentic plant-based meat substitutes that appeal not only to vegans but also to flexitarians.

Naked Glory is also popular on social media, receiving frequent tweets of appreciation, and trending on Instagram with the hashtag #cheatonmeat.

Diana Buntajova
Diana is always looking for the environmental aspect of every story. She is interested in health and lifestyle, hoping to point to issues that are often overseen. Diana has explored topics including B-12 deficiency in the vegan diet, fears about exotic skin farms sparking another pandemic, and the Oreo controversy. Currently studying Journalism at City University of London, she enjoys everything to do with visuals especially photography. Creative and detail-oriented in both her visual and written work. On a mission to find the best vegan cheese and can't resist beyond meat burgers.
Previous articleNovameat introduces world’s first 3D-printed steak
Next articleOatly And Their Range Of Plant-Based Dairy Alternatives