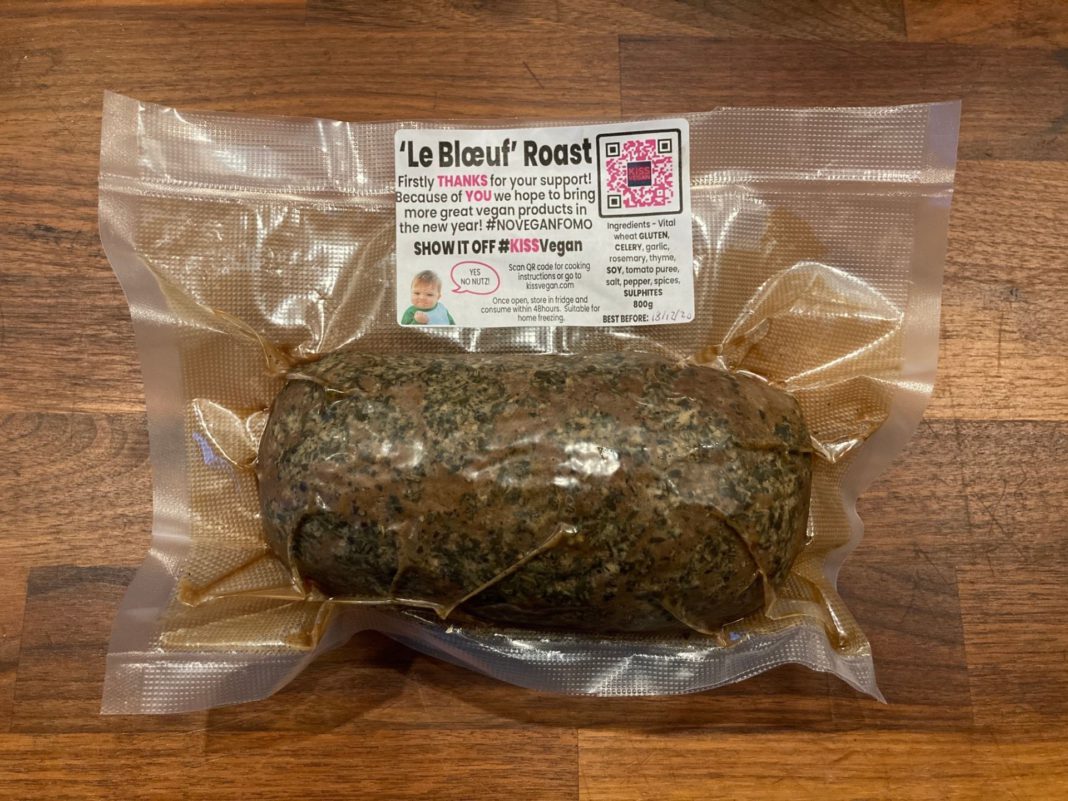 You might not have heard of KISS Vegan yet, but its range of protein-rich roasting joints will soon have it on the lips of every vegan.

KISS Vegan is on a self-proclaimed mission to put a stop to the dreaded ‘fear of missing out’ that so many plant-based eaters experience when roast dinners are on the menu. A fully independent company, founded in Bristol, it delivers nationwide and asks consumers to remember that “a roast is for life, not just for Xmas”.

We tested the 800g Turkee and Le Bloeuf roasts, both made from super-secret seitan recipes and supplied with a rich drizzle for a final flourish in the oven, but how did they fare in my Aga and what did they taste like?

Here’s our review of the KISS Vegan roasts.

First impressions count and I was impressed. Solid, suitably ‘meaty’ looking and with a good smattering of herbs on top, I assumed I was in for something delicious. A couple of cursory prods made me excited for the end texture, as the often spongey roast was clearly not an issue here.

I sent pictures of the roasts to some of my more doubting non-vegan friends and family members, and they all agreed they looked delicious and would give them a try. That’s a big win, as it is sometimes the ‘weird’ aesthetic of alt-meats that turn omnivores off.

But the label needs a little work, which would improve the look of the product no end. 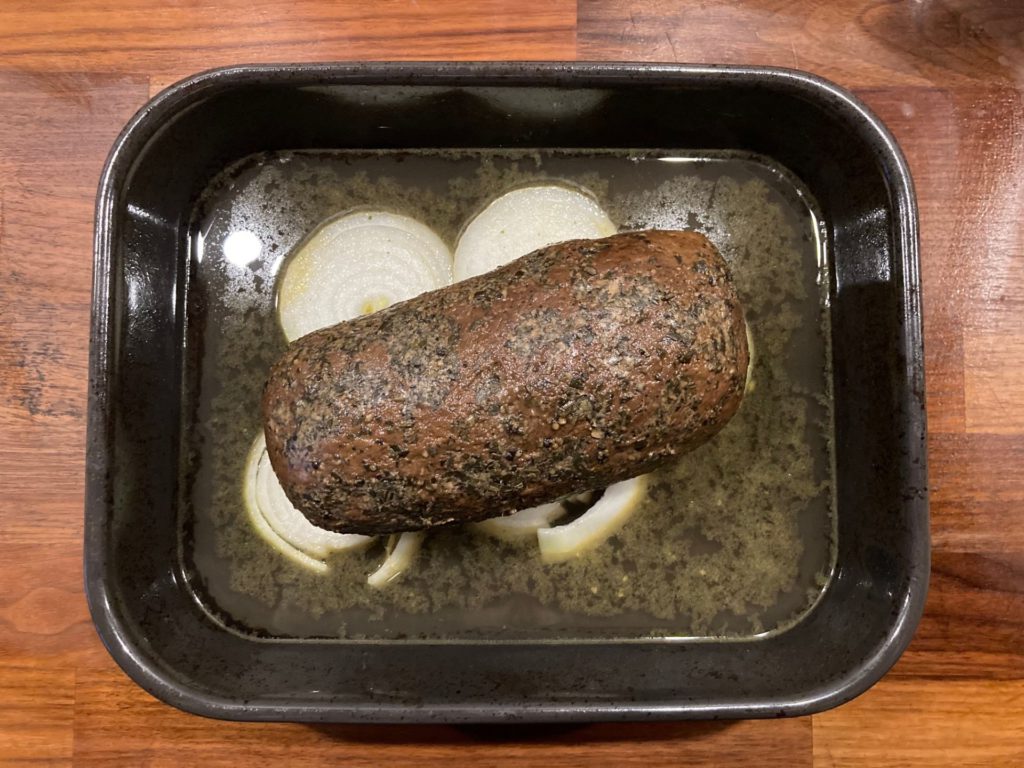 Now then. Here’s where things get a little fun. For the Turkee roast, I went onto the website to find the written cooking instructions. This seemed to work fine and the end result was tasty, hot and cooked through, but with the Le Boeuf, I scanned the QR code, watched the linked video, and wow. That made the world of difference. I highly recommend actually watching the instructional recording, not just winging it with the written guide and hoping you have interpreted everything correctly (I didn’t!).

With my roasts released from their vacuum prisons, I sliced a white onion, laid the rings in the bottom of my roasting dish and laid the joint on top. To this, I added 400ml of vegetable stock and tented the whole dish with foil. It was now ready for the oven.

My Aga runs a lot hotter than conventional ovens, so instead of cooking for the recommended 35 minutes, I went with 20, before removing the foil, adding glaze and finishing off for another 10 minutes. My instincts paid off, as this resulted in a rich, hot and tender roast.

I used the reduced stock and onions to make gravy and served it with carrot and swede mash, steamed Tenderstem broccoli and pan-fried portobello mushrooms. Fridge to plate in under 40 minutes. That’s not bad for a full roast dinner.

Top tip: I used an umami stock cube for my veggie stock. It was the perfect savoury note to complement the rosemary in the Le Boeuf, and with a little balsamic, the gravy added a dash of sweetness that made for a very decadent serving.

Do the roasts taste like real turkey and beef? No. Is that a bad thing? Absolutely not. Rather than faithfully mimicking a meat product, the KISS Vegan roasts merely allude to what it was like to have something chewy and flavourful as the star of the plate.

The Turkee roast had a delicate, light flavour, punctuated with fennel and lemon. We actually enjoyed this more the next day, cold in sandwiches as it really soaked up the leftover stock and became exceptionally moreish.

The Le Boeuf was better hot and I enjoyed how earthy it tasted. The herb crust added a depth of flavour rarely found in homemade seitan, and it was a worthy centrepiece on the plate.

I did not manage to carve the roasts as thinly as I think it needed to be, as some of my slices were more like chunks, and that made for a lot of chewing, but that was my issue due to never needing carving knives. 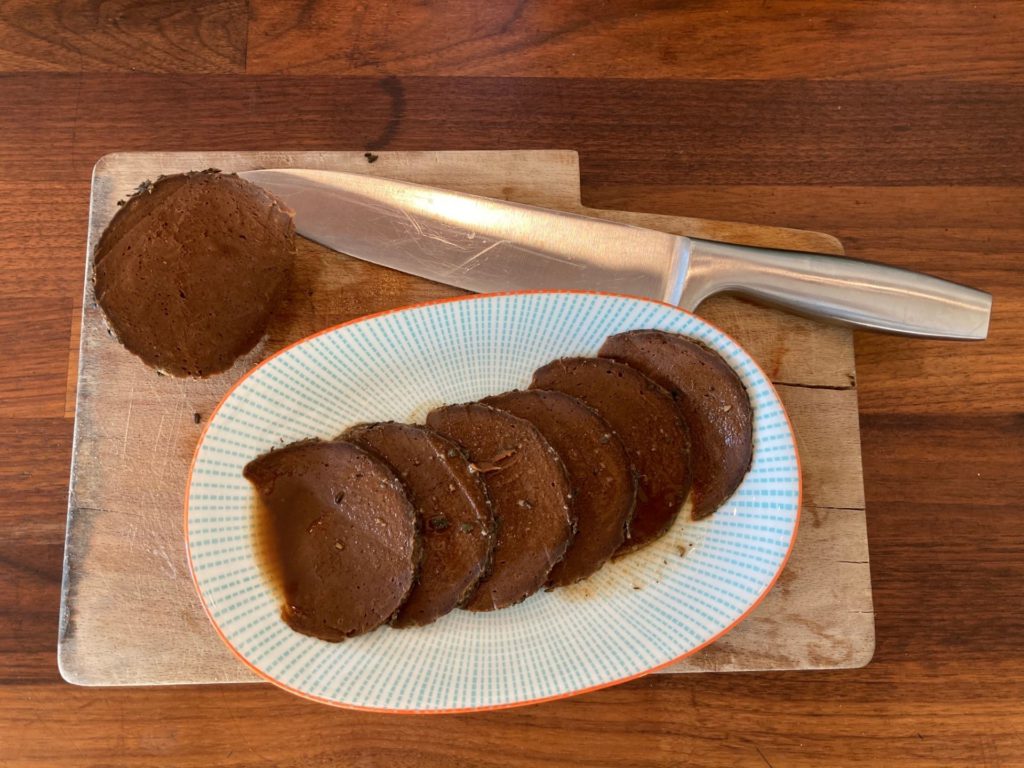 KISS Vegan’s roasts are a viable alternative to the more mainstream supermarket offerings that focus far more on texture and flavour than simply ticking the ‘vegan’ box. These are niche products, developed over time and clearly have a lot of love and effort included. Excellent as a main meal addition, but also just as good the next day in sandwiches, it’s hard to find fault here, though be aware that the cost is in line with niche indie shopping.

The KISS Vegan roasts are 800g and cost £23.95. These are not everyday products though, and if you buy a twin-pack, you can save £8, paying £40 for the two. Keep in mind that one roast will comfortably feed a family of six, with leftovers as well.

The KISS Vegan roasts are available directly from its website, as singles, twin-packs or half-and-half selections.

If seafood is more to your taste, read about Good Catch and its new products.

Amy Buxton
Amy is a committed ethical vegan, raising a next generation compassionate human with her husband and their beloved dog, Boo. A freelance writer with a background in PR, she decided to use the COVID lockdown period to refocus her client base and has come to The Vegan Review as a senior writer and editor, before moving into her external content director role. "What we should be doing is working at the job of life itself" is Amy's mantra, courtesy of Tom from The Good Life.
Previous articleExclusive: OmniPork founder David Yeung talks UK launch
Next articlePlants are delicious: 2020’s best vegan cookbooks