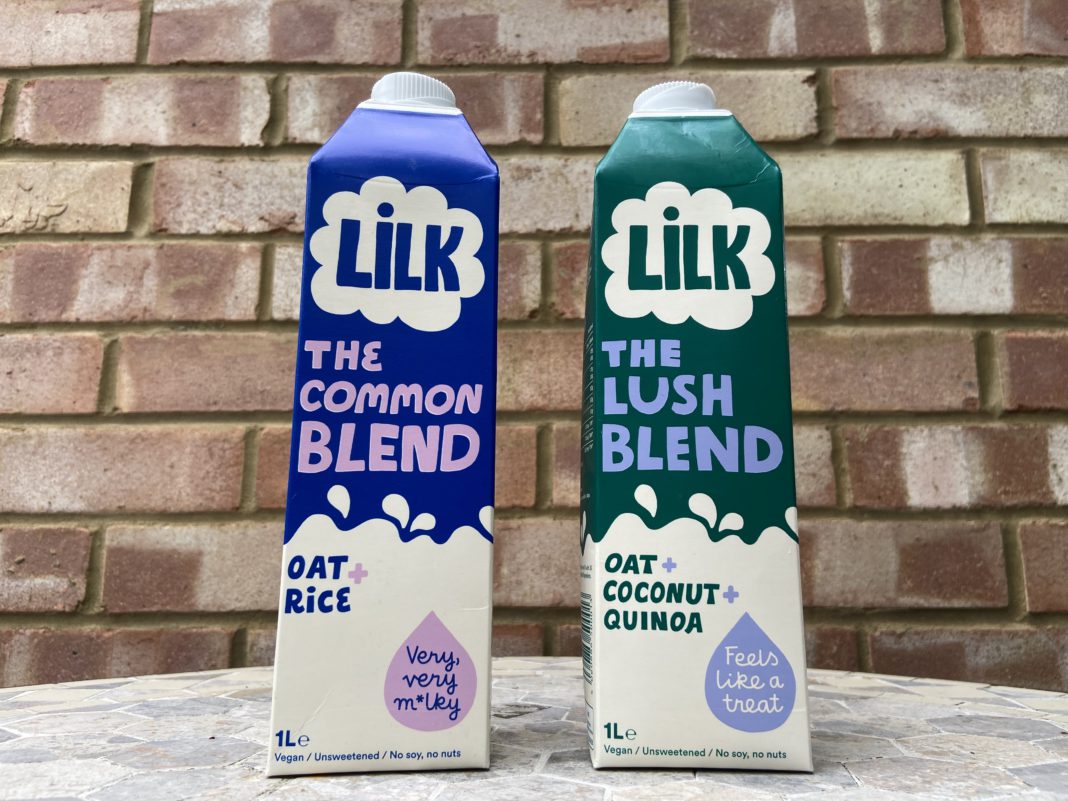 We reviewed the Lilk Common and Lush Blends, a set of new plant-based milks made from blending vegan ingredients. Here’s what we thought.

Last month, vegan startup Lilk launched new plant-based milks in the market — and they’re focused on blends. Now, blends aren’t something new — brands like Rebel Kitchen have been doing them for years. Even Alpro has a coconut and almond milk. But Lilk’s blends are unique, and the brand embraces those ingredients to highlight the milks.

There are two varieties, labelled the Common Blend and the Lush Blend. I taste-tested my way through both, trying each in six different ways to review them. Here’s how it went.

The Common Blend — supposedly the base, flagship milk — combines oats and rice, each at a 5% proportion. Lilk describes it as “incredibly dairy-like”.

The oats and rice meet rapeseed oil, tricalcium phosphate, dipotassium phosphate as an acidity regulator, gellan gum as a stabiliser, sea salt, potassium iodide, and vitamins B12 and D.

What’s it like to drink the Lilk Common Blend plain?

The Common Blend by Lilk smells quite nutty. I took my first sip and was swept away. It’s incredible. I can see why they market it as milky and dairy-like.

This milk is naturally sweet. There’s a familiar oat note in the background, but the rice mutes it and balances the flavours out. It’s effective and tastes very neutral, and its consistency is just slightly thinner than whole milk. Lilk’s Common Blend makes for a fantastic base milk. 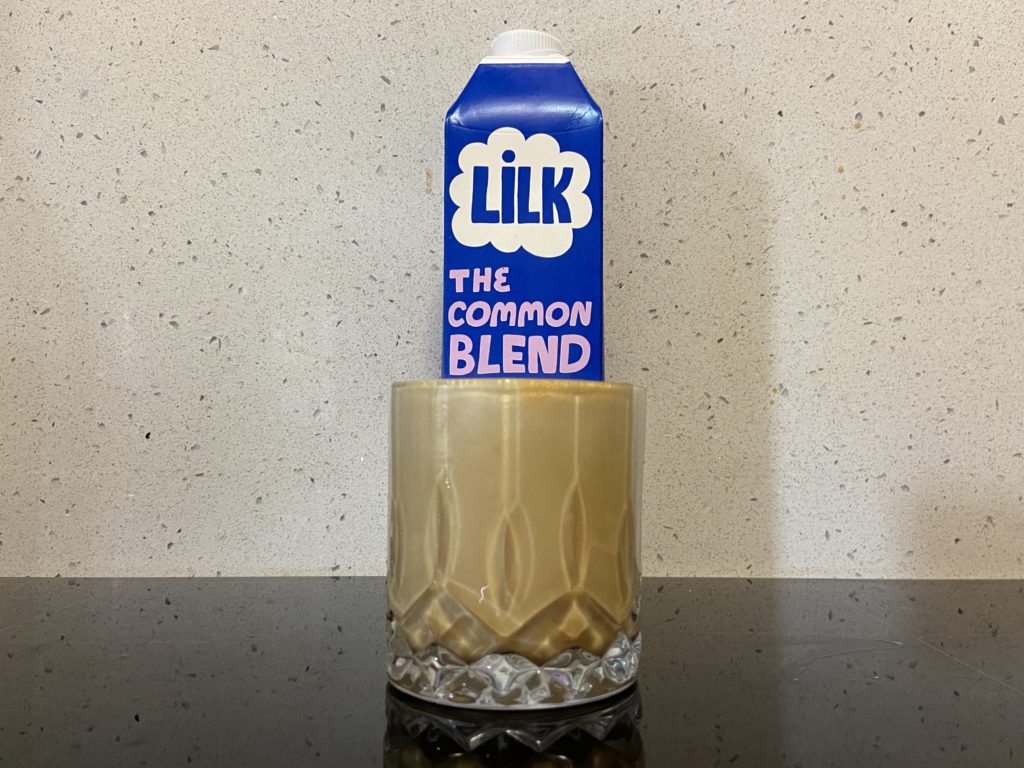 Both of the milks are marketed as coffee- and tea-compatible, with the Common Blend said to “froth and foam beautifully”. So, I had to put that to the test, didn’t I?

While foaming in a French Press, it starts slightly slowly but the froth gains momentum as you plunge rapidly. A few bubbles remain, but most go away when you tap the French Press on the counter and give it a swirl.

The Common Blend manages to generate a good amount of froth, but it’s not the sturdiest. The foam separates from the liquid relatively quicker than other alt-milks.

Flavour-wise, it’s quite oat-forward with a hint of nuttiness, with the natural sweetness from both the oats and rice making it delightful in coffee. It doesn’t feel too heavy or thin, with a creamy mouthfeel that isn’t overbearing. 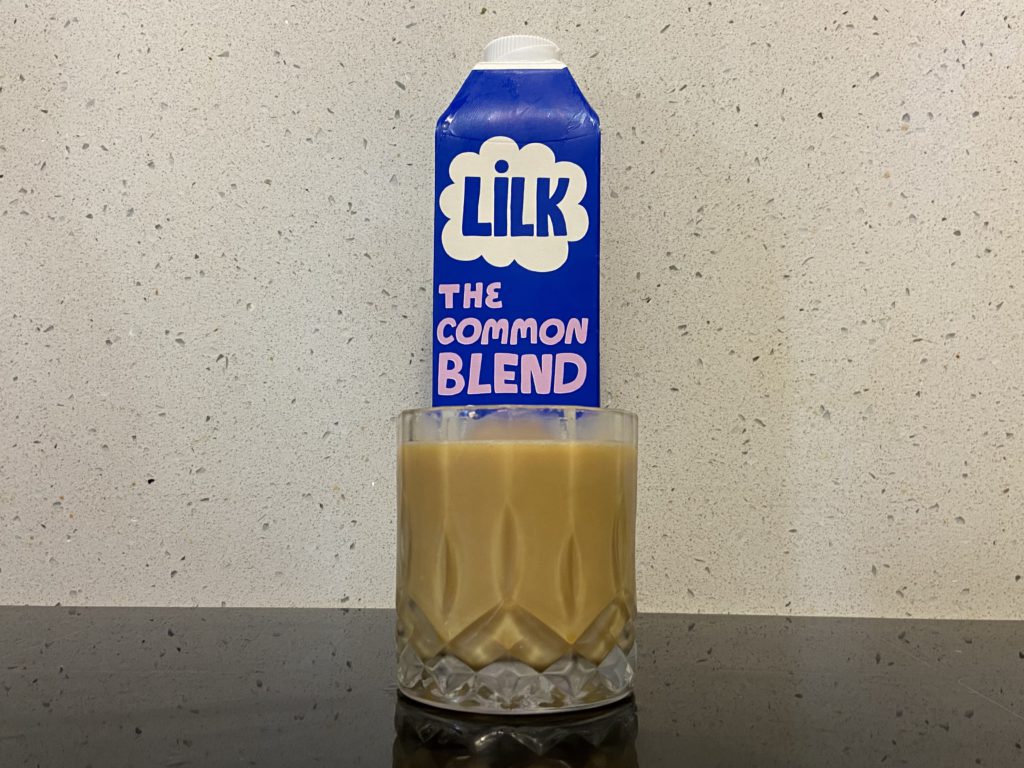 This has a great texture and blends really well with the coffee. Crucially, it doesn’t water the cold brew down like a lot of plant-based milks do.

There’s a velvety consistency when drinking this and a largely neutral flavour, with a slight hint of acidity that’s very pleasant. Surprisingly, there’s no bitterness at all, without the milk overtaking the coffee.

There is, however, just a minute savoury note that takes away from it a little.

Read our ultimate showdown of the best barista plant-based milks in the UK. 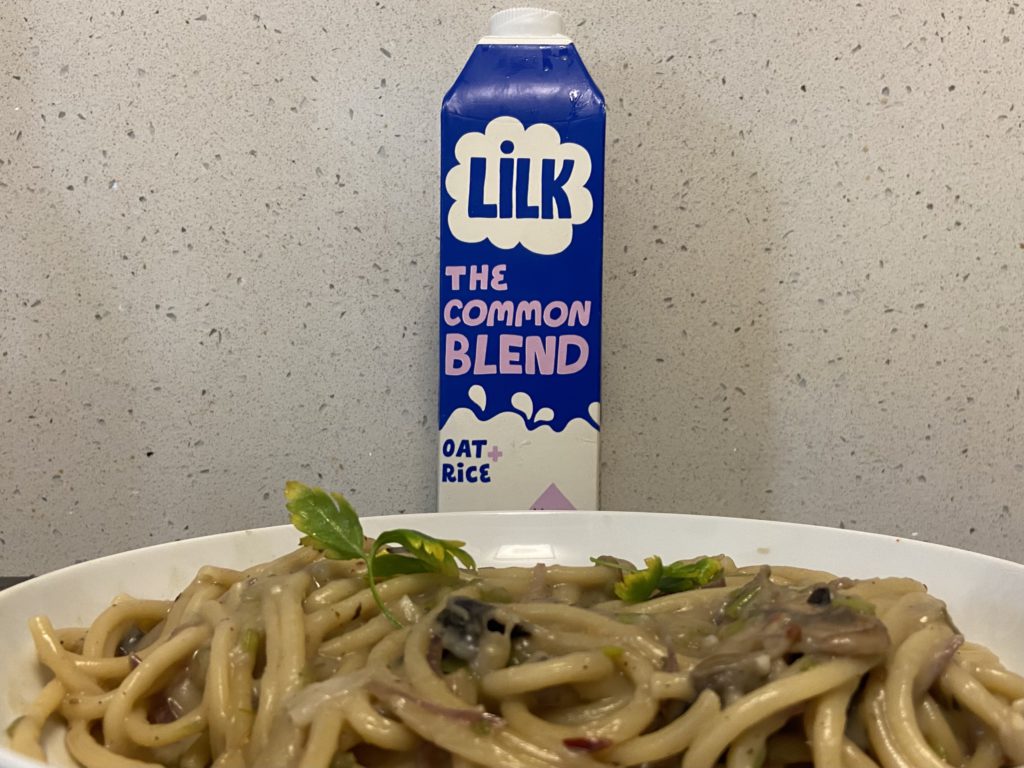 As it’s an unsweetened milk, I gave it a go in a béchamel-based pasta sauce. The Lilk Common blend lends the sauce a beige tint, and combines well with the roux. It thickens quickly and has a very neutral flavour, but it lacks that subtle dairy sweetness that elevates the flavour profile of a classic béchamel.

The sauce clings to the pasta well and works in tandem with the other components. In this case, that neutral flavour is slightly detrimental to the overall flavour, which could do with some more depth. 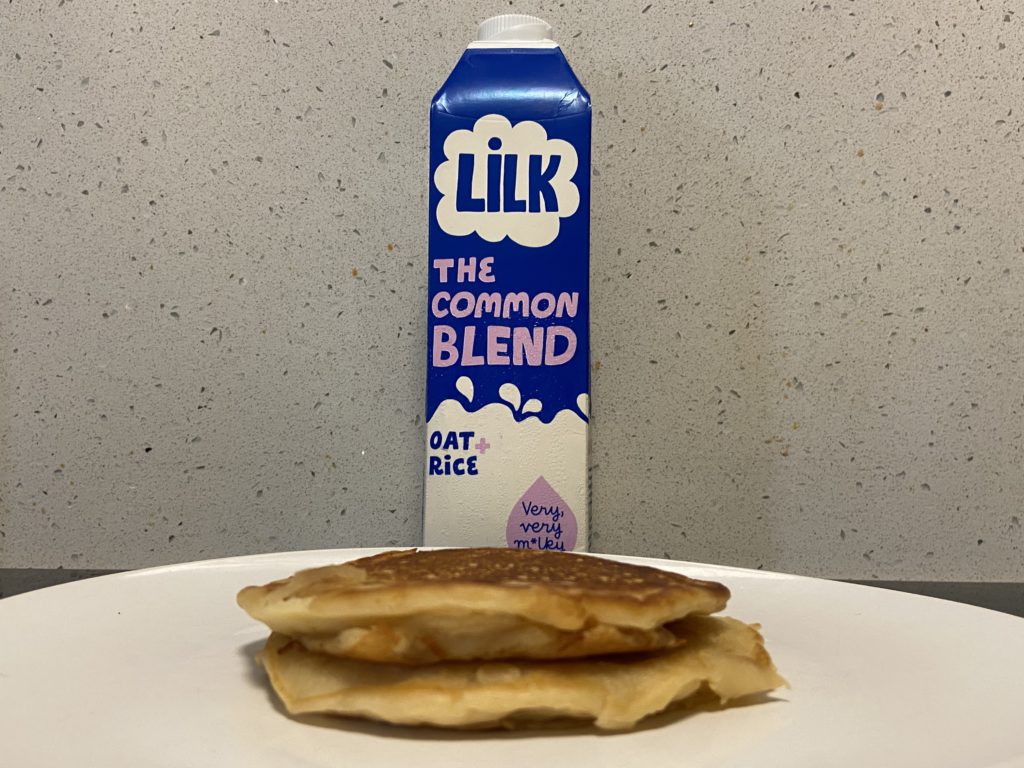 Fluffy pancakes are the perfect weekend brunch. I wanted to test how Lilk would fare as a vegan buttermilk. It has an acidity regulator, which prevents the batter from curdling when adding apple cider vinegar to it. The acid in buttermilk helps react with baking soda to provide heft to pancakes, whilst also breaking down gluten strands for a lighter, fluffier final texture.

Even without the curdling, these pancakes do fluff up a little — not as much as you’d want, though. They have a slightly nutty flavour that is not too heavy on either the sweetness or the savouriness. These taste buttery and wonderful. 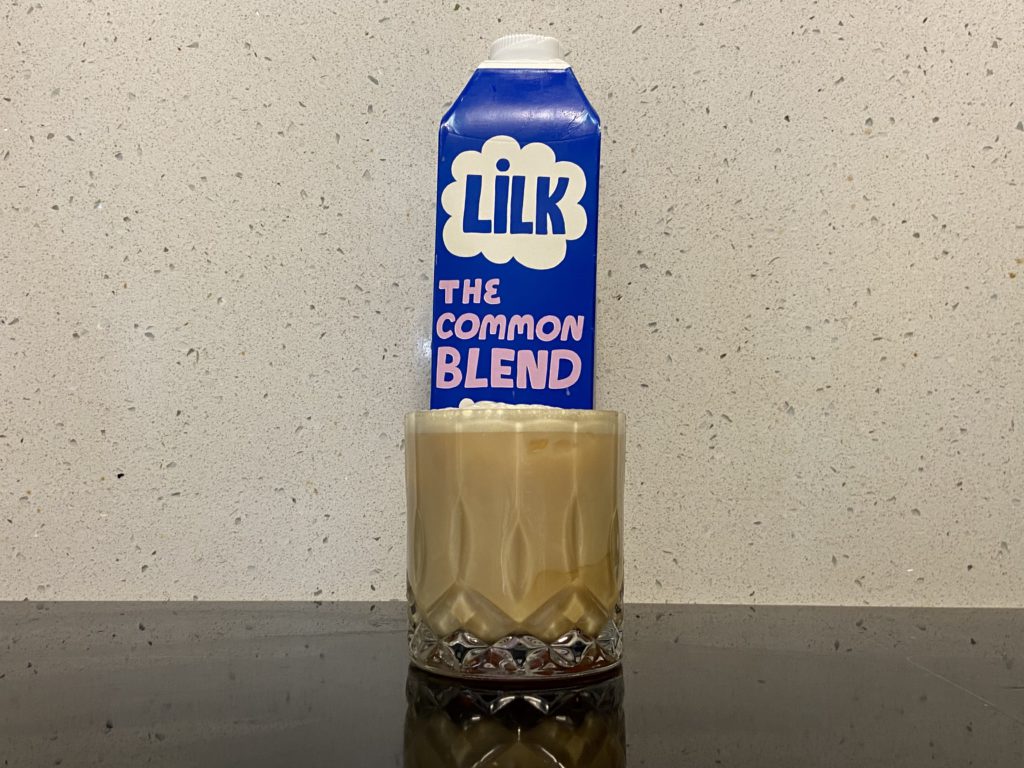 Frothability isn’t just for hot espresso-based drinks — cold foam is the holy grail of plant-based milks. I tested both the Lilk milks in White Russians to see how they foam up and what they do to the flavour.

The Common Blend froths up a little, but settles quickly, leaving a very thin head of foam on top. It tastes really good though. The drink is not too milky and the milk doesn’t dominate its flavour, instead accentuating the other components.

The Lilk Lush Blend is a triple blend of oats, coconut and quinoa. Quinoa milks are notorious for being unpalatably bitter, but Lilk attempts to solve this by using just 0.1% of quinoa in this milk.

The oats are at 10% (which is on par with most oat milks and higher than a few), with coconut cream accounting for 2%. All the other ingredients are identical, except for the acidity regulator, which is sunflower lecithin in this case.

Read our ultimate showdown for the best oat milks in the UK.

What’s it like to drink the Lilk’s Lush Blend plain? 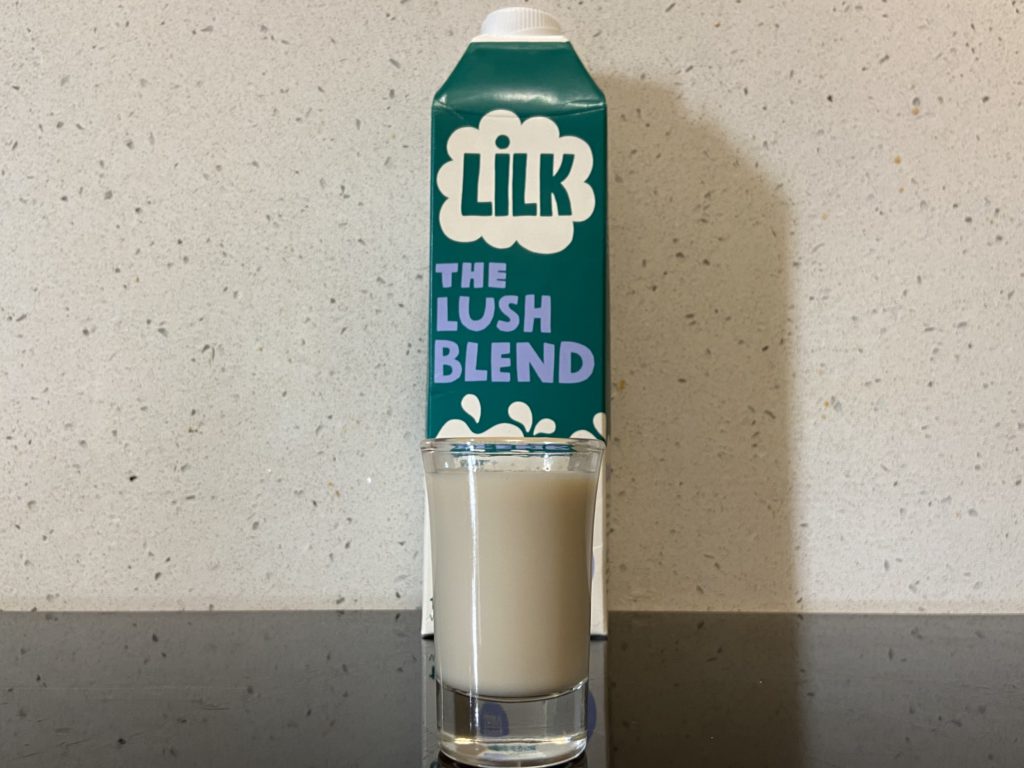 The Lush Blend is a deep beige in colour. It has a wonderful texture and follows the dairy-like notes of The Common Blend.

The coconut works well with the oat, but even the 2% slightly dominates the flavour. The oat serves as a great milky base, and props to Lilk for innovation in terms of the blend.

However, even just the 0.1% quinoa gives it a hint of bitterness that undercuts what the milk is trying to achieve. The consistency is great, but drinking straight up, the flavours don’t team up, instead confusing the palate. 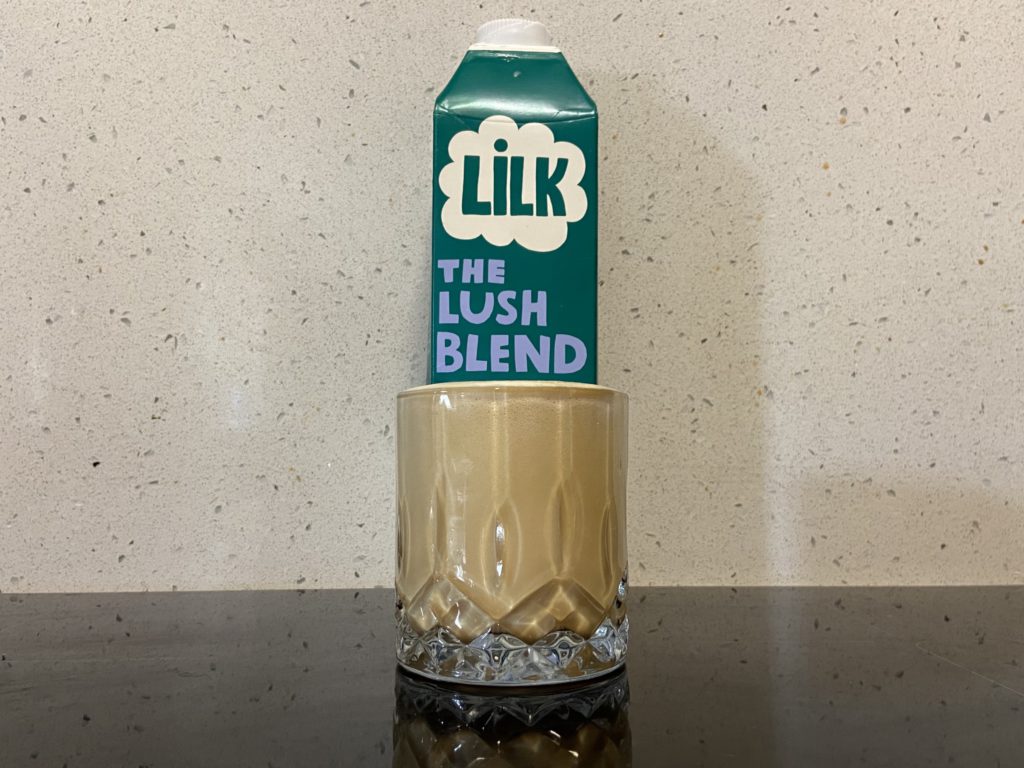 This froths up well. There are quite a few bubbles, small and large, but just like with the Common Blend, most go away after a tap and a swirl. The foam doesn’t stand for too long though, maintaining a small head.

The first sip is surprising and coconutty, but that mellows out and helps balance the other flavours. Here, the quinoa’s presence is an advantage, as it helps create a neutral-ish note that becomes more pleasant as you drink it. And as always, the oat does wonders as a base. 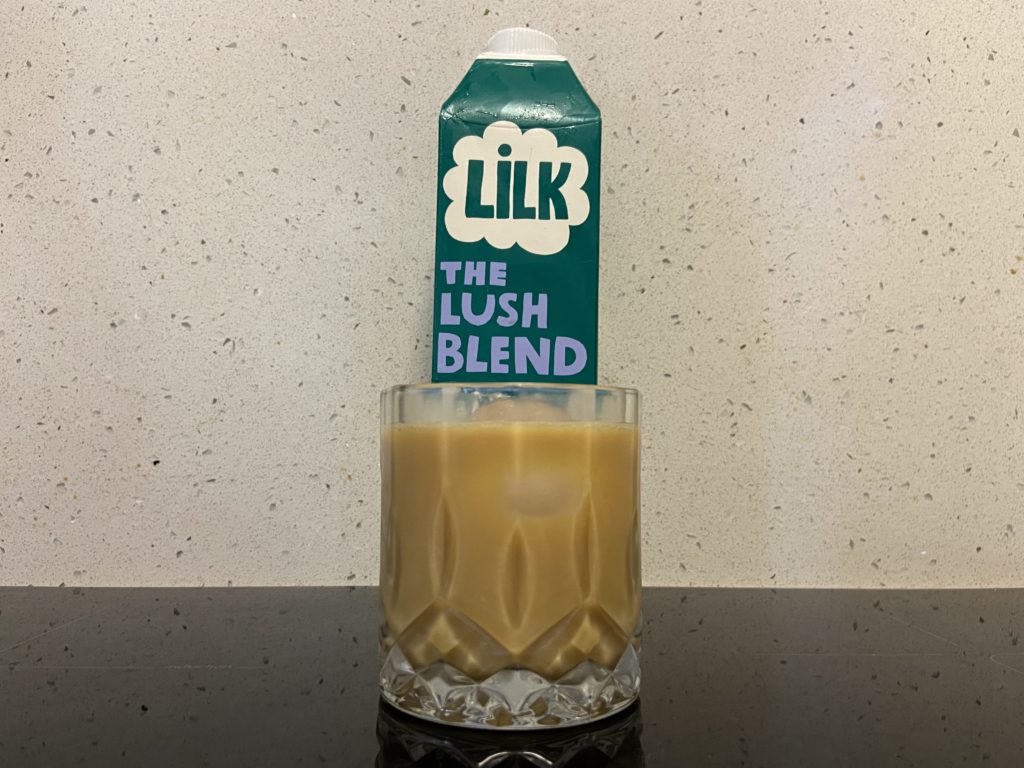 There is no acidity here — pleasant or otherwise. That isn’t a bad thing when it comes to cold brew, whose entire purpose is to remove acidity from the coffee beans by not letting them get in contact with hot water.

This has a slightly savoury note that also goes on to accentuate the coconut’s flavour. The consistency is great and the flavour very good too, but that coconut is — how do I describe it — too little but too much?

You could do away with it, but if it’s there, it should be more prominent, because in its current form, it’s so blatantly faint in the background that it’s distracting. And there’s a hint of bitterness — hello, quinoa? — to boot. 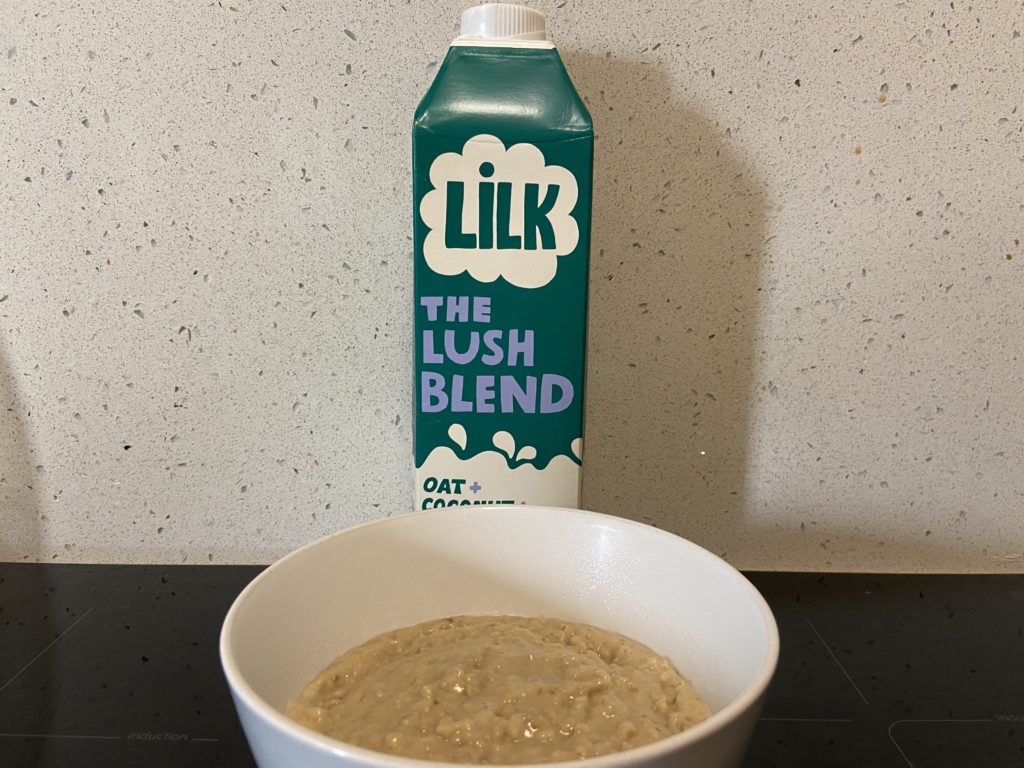 Instead of béchamel, I felt this milk would be better tested in porridge — because let’s face it: who wants coconutty béchamel?

Alas, there’s a lot going on in this oatmeal. First, the sweetness is well-balanced because of the natural flavour of the oats and slightly savoury notes of the milk, but the coconut flavour is quite distracting and doesn’t necessarily add more as much as it detracts.

Since it’s coconut cream — and a very mild amount of it — it dominates the oat. And while occasionally lovely, there are background notes that taste mildly soapy and slightly bitter thanks to the quinoa. 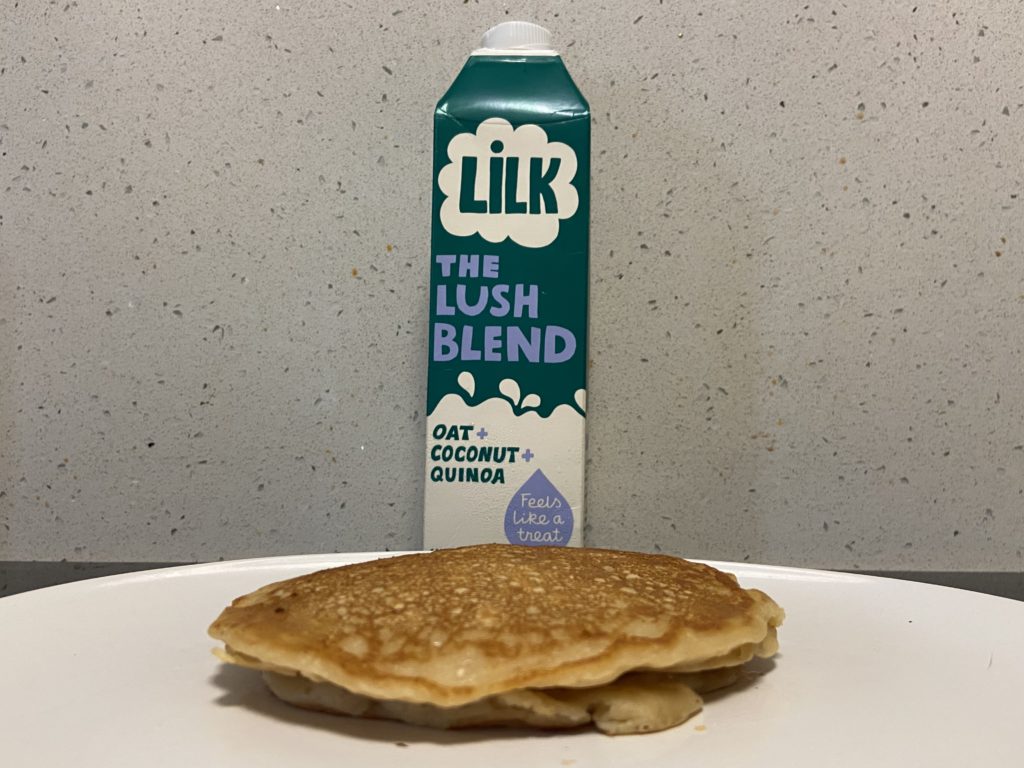 How lush do these pancakes feel? There are a few bubbles here and there after reacting with the acid in the apple cider vinegar.

But these don’t fluff up too much and have a slightly more savoury note to them, which dominates the natural sweetness of the milk’s ingredients. The texture is nice, but they don’t taste as buttery as you want pancakes to be. 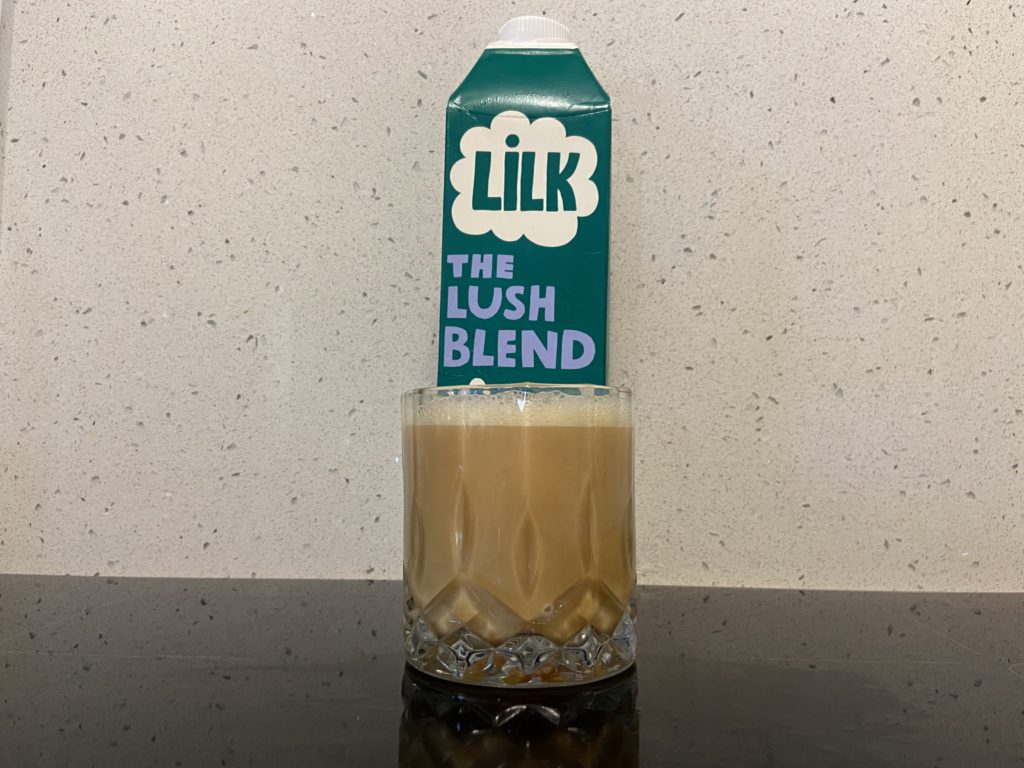 Finally, a coconut-quinoa White Russian. The Lilk Lush Blend barely froths up, and the little amount of foam goes away very quickly, leaving no residual head. That makes it almost like a boozy cold brew latte.

It tastes slightly better than the Common Blend here. That fraction of quinoa actually helps balance out the flavours and bring them together better. You don’t really taste the coconut, but it’s definitely creamier than the other one. The only thing that lets it down — which is essential for a White Russian in my opinion — is the frothability.

Fancy blending your own milk? Check out our experiment with milkadamia and Sproud.

Lilk’s innovation deserves recognition and applause. Blends are, to me, the future of the plant-based milk world, until fermentation-based dairy graces our retail stores.

The Common Blend and the Lush Blend perform brilliantly in many applications. Both have their shortfalls — but then again, what product doesn’t? There could be a few tweaks in terms of the concentration of different ingredients, but this is a fine effort for a vegan product launched in an increasingly saturated market.

I loved these blended vegan milks by Lilk. Whether they convince others the way Rebel Kitchen has done remains to be seen.

The Lilk Common and Lush Blend plant-based milks are available on its website.

Anay Mridul
Anay is journalism graduate from City, University of London, he was a barista for three years, and never shuts up about coffee. He's passionate about coffee, plant-based milk, cooking, eating, veganism, writing about all that, profiling people, and the Oxford Comma. Originally from India, he went vegan in 2020, after attempting (and failing) Veganuary. He believes being environmentally conscious is a basic responsibility, and veganism is the best thing you can do to battle climate change. He gets lost at Whole Foods sometimes.
Previous article14th century monks had digestive issues due to meat-rich diet, finds study
Next articleVegan rugby club Green Gazelles to host environment-focused charity match