A peer-reviewed study took place between January and February 2021 and assessed 40 healthy volunteers between 18-55. It concluded that plant-based meats (specifically Meatless Farm products) have a positive impact on gut health.

The research is titled “Impact of plant-based meat alternatives on the gut microbiota of consumers: a real-world-study.” The findings indicate that people who eat just five meat replacements a week experience an increase in healthy gut bacteria (butyrate.) This bacterium promotes good digestive health and reduces inflammation. The researchers believe this is due to the high nutritional and fibre content of the product in comparison to standard meat.

The study was published in the prestigious FOODS journal and received ethical approval by London Southbank University. Lead researcher Miguel Toribio-Mateas of the School of Applied Sciences at London South Bank University said the study is “ground-breaking” precisely because “it’s the first to indicate a direct correlation between plant-based meat offerings and changes in gut bacteria consistent to better gut health outcomes.”

This will open room for further research, as registered nutritionist, Rhiannon Lambert recognises “this significant growth in our eating behaviour makes this study, albeit small in sample size, promising and should encourage further research into this important area.”

Changing the future of meat 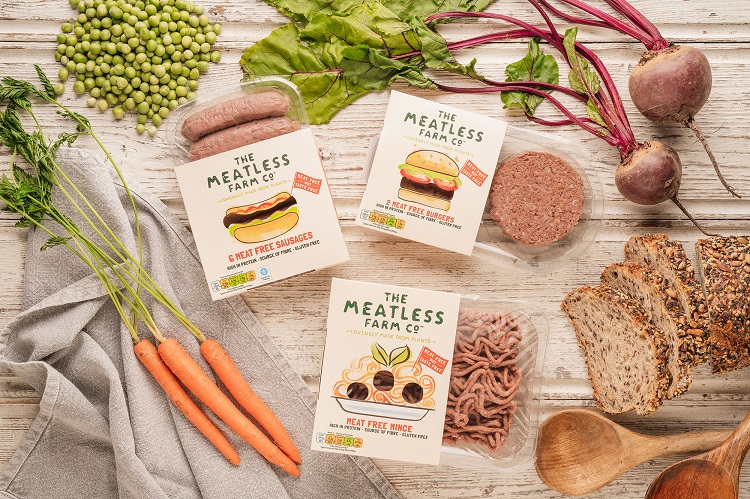 Meatless Farm was founded in 2016. The company launched to help reduce the world’s dependency on intensively farmed meat, offering a meat replacement that’s cost-effective, environmentally friendly and nutritionally viable. The brand has been endorsed by Tour de France sprinter Mark Cavendish, MBE who said that his “rest days now feel much more invigorated” since he switched to the plant-based alternative.

Originally, the company operated only in the UK and has since expanded to Europe and North America. Their products include replacements for chicken, sausages and burgers which on average use 90% less land compared to their meat counterparts.

Meatless Farm are confident in the nutritional benefits of their product, offering consumers the chance to redeem a voucher for one of them if they share a picture of their current plant-based meat on Plant-Based Mic Drop – Meatless Farm USA by the end of October.

Morten Toft Bech, Founder of Meatless Farm said, “We’ve worked tirelessly to create a plant-based meat that’s not only better for the environment but better-for-you – and we’re thrilled that this study helps to validate the nutritional prowess of our products.”

And if you want to find out more, the results of the study are open-access and freely available online here.

Sean Barrs
Sean is a vegan activist and academic. He is writing his English Literature PhD thesis on the politics of diet. He is also an ultra-runner and a proud member of Vegan Runners UK. In the past, he has written for numerous publications including Plant Based News. He came to The Vegan Review to help promote the work of others, he is especially interested in writing on individuals who advocate for the vegan lifestyle through sports and other forms of activism.
Previous articleEurope’s first plant-based world expo 2021 set to reveal new vegan food options
Next articleVegan Campout 2021: A massive success despite challenges