“This is a game-changer,” said Israeli animal rights activist Tal Gilboa. “The future is here.”

The groundbreaking developments in the manufacturing of cultured meat, eggs and milk are “not necessarily great news for vegans and vegetarians, because they have long ago decided not to be part of this industry”, she explains. “They are, however, a game-changer for the rest of the world’s consumers of animal-derived products.

“It means that if there is a product at the supermarket that is of a similar price to meat, eggs, or dairy, where the only difference is that it came from a lab, customers will buy it,” adds Gilboa, who is prime minister Benjamin Netanyahu’s animal rights advisor. “It is a win-win situation because it is right morally and right for the environment.”

The activist-turned-special advisor recently accompanied prime minister Benjamin Netanyahu on a visit to the Aleph Farms lab in Rehovot, where, surrounded by reporters and photographers, he tasted steak made from cell-based meat. The event made for headline news as all waited eagerly to hear the prime minister’s verdict — Netanyahu was impressed, telling attentive reporters that this development marks a positive change for the environment.

Known for his growing compassion for the animal world, Netanyahu has, through a robust, free-market narrative greenlit an industry with a huge potential earning and an equally massive impact on the environment. Rumoured to have been influenced by Noah Harari’s reflections on veganism, the prime minister has publicly remarked on the vast natural resources required to feed cattle and the enormous environmental investment that goes into producing a small piece of meat.

This is a development of global importance. Aleph Farms recently announced a collaboration with global Brazilian meat and food company BRF S.A. The partnership will see the joint development and production of cultivated meat in the Latin American territory, using Aleph Farms’s patented production platforms.

“As one of the largest beef producers in the world, Brazil is a strategic market for us,” said Aleph Farms co-founder and CEO Didier Toubia, hoping that the collaboration “will drive a faster scale-up of cultivated meat and eventually lead to a broader positive impact”.

The firm has also announced an agreement with the Mitsubishi Corporation’s Food Industry Group to bring cultivated meat to Japan.

There is great awareness and readiness in the market for meat and dairy alternatives. Israeli research is at the forefront of this fast-expanding industry with several startups and high profile innovations, such as 3D-printed meat. Yes, you read that right — Redefine Meat managed to produce animal-free ground beef and steaks that bear the texture, look and, of course, flavour of real meat, all created using a 3D printer.

Redefine Meat’s products were recently put to the test in Tel Aviv, where, for two days, its food truck served familiar Mediterranean meat dishes, such as kibbeh and kebabs. Supplies sold out within several hours and impressed customers testified to the manufactured meat alternative, closely matching the texture and taste of animal-derived meat.

The brand has now joined forces with distributor Best Meister to supply the alternative meat products to Israel’s butchers and restaurants, with the intention of taking 3D-printed vegan meat global.

The big deal here, said Eshchar Ben-Shitrit, Redefine Meat’s CEO, is that consumers can choose alternative meat not just out of concern for animal welfare or the environment, but because it has the flavour and texture of real meat.

But it is not just meat — there are truly groundbreaking developments in the creation of dairy products from yeast.

“Real milk. No cows,” hails the slogan of Imagindairy, a high-profile startup set to please the millions of milk-lovers who detest the way dairy cows are treated. It is worth noting that these are not the already-available milk alternatives made of rice, nuts or soy, but yeast-generated dairy products that carry the nutrition value, texture and taste of real dairy.

These products will have “all the important nutritional values of cow’s milk with the same taste, aroma and texture”, explains Prof Tamir Tuller from Tel Aviv University’s biomedical engineering department, “but without the suffering that is caused to cows and without damage to the environment”.

Its proprietary computational technology was developed “to increase the expression of milk proteins in microflora” and eventually produce “tasty, healthy and nutritious dairy products that are environmentally friendly and care for animal welfare at affordable prices”.

The new products will have no hormones, no lactose and will be cholesterol-free, according to the company’s website. It also alerts visitors to the troubling statistics showing that 70% of antibiotics in the US are being used for animals, 56 billion farmed animals are killed every year, and dairy production is responsible for 3% of the world’s annual greenhouse gas emissions.

Check out our World Vegan Month story on being vegan in Israel. 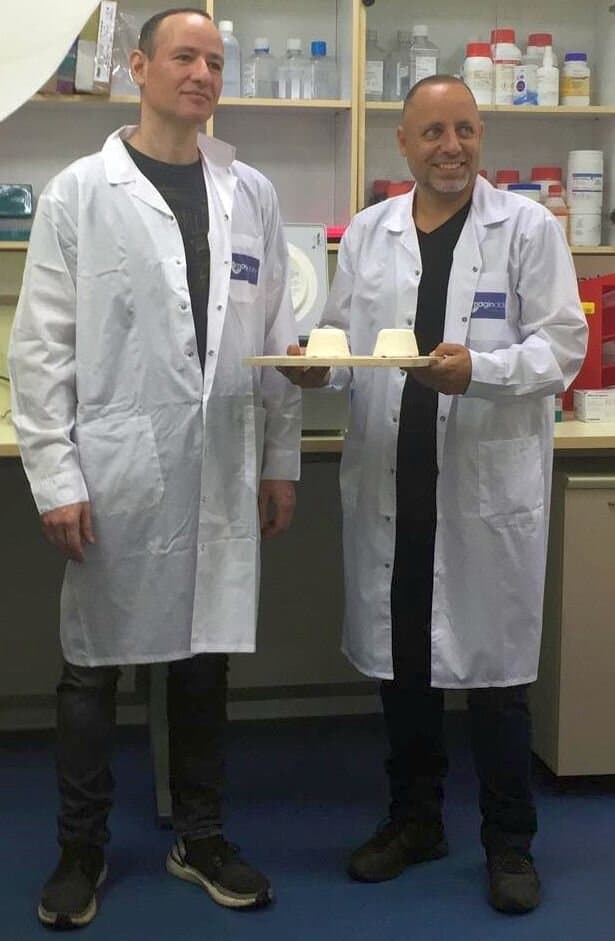 “The entire dairy industry is founded on breaking the bond of love between mother and offspring,” said Noah Harari, whose take is said to have influenced Netanyahu. “A cow never produces milk unless it becomes pregnant and gives birth to a calf. The cow produces milk in order to feed her calf, but then humans take away the calfs to be slaughtered for meat, and milk the cows themselves.

“This results in much pain and agony for hundreds of millions of cows and calves each year. Judged by the sheer amount of misery it causes, modern animal farming is probably one of the worst crimes in history.”

Harari adds that environmental considerations are also relevant. Producing meat, milk and eggs uses many more resources and creates much more pollution than producing an equivalent amount of plant food. “To give just one example, it takes about 15,000 litres of freshwater to produce one kg of beef compared to 287 litres needed to produce one kg of potatoes.”

It looks like technology is rising to the challenge. If consumers’ feedback to date is an indicator, we might well be looking at a landmark development for humankind.

Hannah Gal
Hannah Gal is a London based journalist and filmmaker. Her credits include The Guardian, The Independent, The Huffington Post, The Knowledge, Al Araby, Photo District News, The British Journal of Photography and The Jerusalem Post among others. Hannah seeks great coffee and reason wherever she goes.
Previous articleDotsie Bausch wants to make the LA 2028 Olympics plant-based
Next articleHow to not get pinched by a leprechaun as a vegan