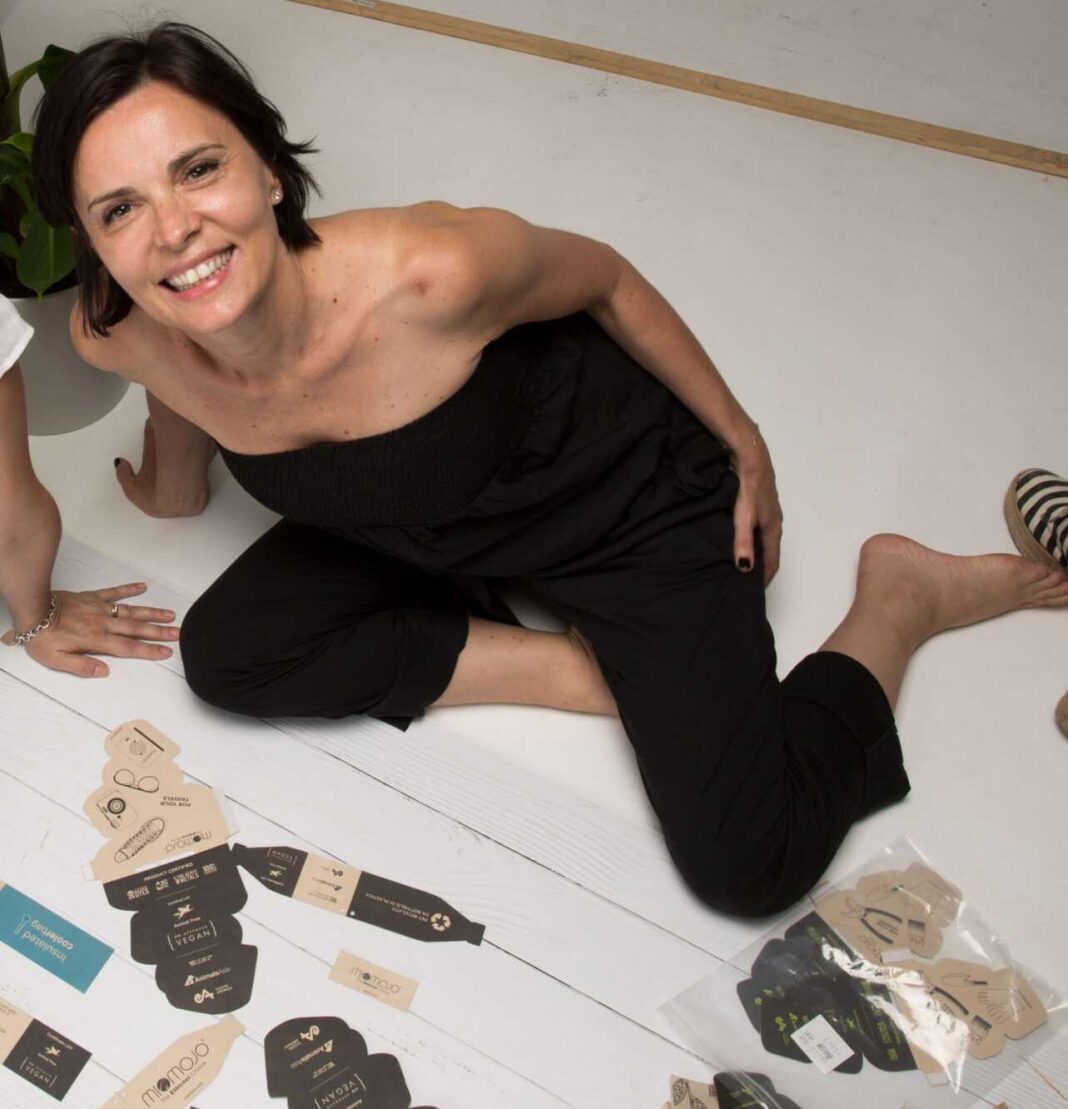 “I like design, and I like aesthetic, beautiful things,” says Claudia Pievani. “I wanted to combine my passions for design, animals and the environment. I wanted to do something creative, and not just have products. So from day one, it was clear I needed to combine creating products with contributing.”

She’s talking about her company, Miomojo, an ethical vegan fashion brand from Bergamo, Italy. The company has made waves in the cruelty-free fashion industry in recent years, and has also been endorsed by Vogue.

Having founded it in 2012, after years of working as an export manager and consultant, Pievani knew from the beginning she wanted to create something in line with her values and love for animals. And so, she got in touch with Hong Kong-based charity Animals Asia, and decided to donate a portion of Miomojo’s profits to fight animal cruelty in the world’s largest continent.

Since then, Miomojo has donated €200,000 to the charity. “It was really woeful, what was happening with bear bile farming. The bears are kept in cages for 20 or 30 years,” explains Pievani. “Animals Asia is very professional, they do great work, are extremely serious and have incredible results.”

The brand has since added several charities to its list of collaborations, including Four Paws and Mercy for Animals. It has also worked with multiple farm sanctuaries and rescue centres. “We’ve worked with PETA,” Pievani tells me. “But it’s a bit too big and doesn’t have a specific rescue centre.”

Does donating the profits not affect the margins much? “It’s something that was there from day one. This was included in the business plan, it was just a priority,” she says. “I wanted to give that money and give back from the first euro. Of course it’s fewer margins for us, but it’s why I do it.”

She named Miomojo after the expression “my mojo”, translating the former word to Italian. “I later discovered that it also has another meaning, because, in a South African dialect, it means ‘lucky bag’,” she says, laughing. 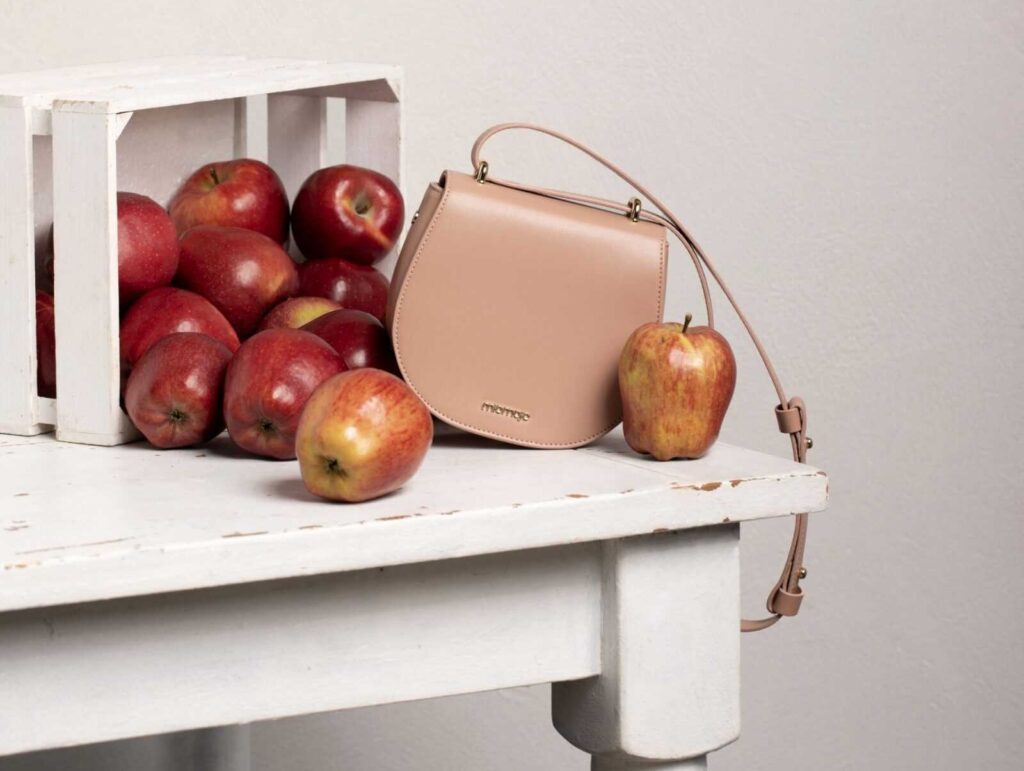 When she started the brand, her priority was to not have any animal products. That, combined with something eco-friendly. “This was in 2012. It wasn’t as easy to get recycled products that were possible to use and affordable,” Pievani recalls. “Since then, many things have changed. 90% of what we use is recycled material. We still have one line online that is PU — so it’s faux leather — but we’re phasing that out and it’s going to be just recycled material.”

Miomojo’s latest collection, called Prima Linea, features bags made from two types of plant-based leather: apple skin and cactus leather. “We have people creating a huge database with all the innovative materials — organic, sustainable and always plant-based,” Pievani tells me from her Bergamo office. “This apple skin was born not very far from here, a two-hour ride to South Tirole.”

There are numerous apple plantations in the region. Those apples are used for the apple industry to make juices and other products, and that leads to a lot of waste. “So the producers invented a way to make use of the apple waste, mixed it with other materials and created apple skin,” says the Miomojo founder. “We found that very interesting. It was completely local as well, so very sustainable.”

The cactus leather is produced by vegan fashion company Desserto in Mexico. “I love Desserto. We met here in Italy, because they were at a fair in Milan a couple of years ago. And when we touched it,” says Pievani, “we found it’s such an incredible material with incredible performance. It’s soft, and no one can see that it’s not leather.

“I found the story fantastic, really innovative, and very sustainable. They create materials with less water and are so modern, so I knew we had to use these materials, they’re wonderful.”

Manufacturing the bags with innovative, recycled plant-based materials does get pricier. But Pievani has made her peace with that. “Sustainability costs more, but that’s okay. It’s not something we can hide; fast fashion is cheaper, but it costs a lot for the environment and human beings. And if you want to change something, you need to be ready to pay a little more.”

She explains that there’s still the idea that because leather is more qualitative, plant-based alternatives should cost less: “We’re still fighting a little with the fact that people think: ‘Oh, cactus leather? Why does it cost like a leather bag?’” She believes there needs to be more education about this, and at the same time, consumers’ first motivation should be the fact that no animals are used in their bags. “There are nice options, so you don’t need to choose something that isn’t nice aesthetically. You can combine the two things.” 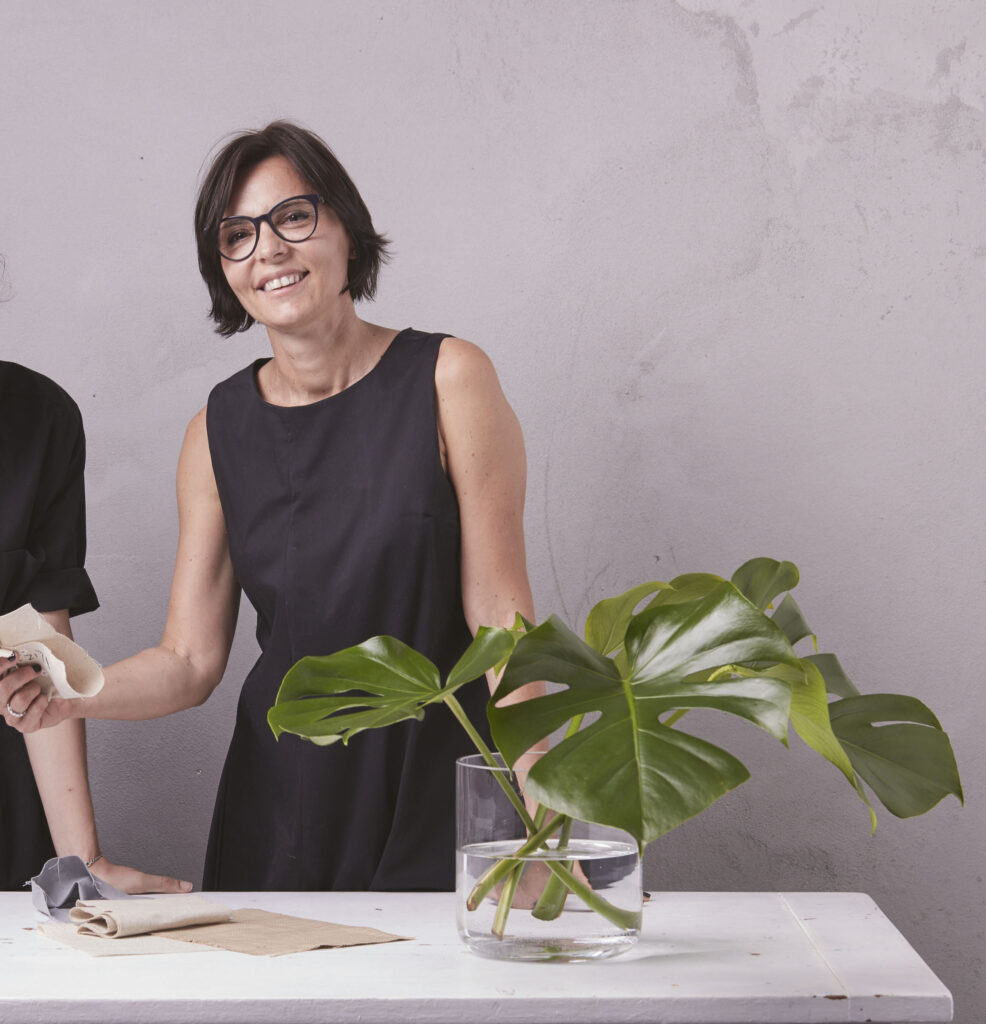 What’s the biggest challenge facing the vegan leather industry? “When people saw us in the news, we were immediately attacked by the leather industry in Tuscany. They were critical on social media,” describes Pievani. “Being so tiny, we get some noise around, and we’re already attacked like this? It felt like when the milk industry was attacking Oatly. But it’s a good sign! It’s a fantastic sign!”

She adds that convincing consumers that you can have a cruelty-free alternative that isn’t just as nice as leather, but better, remains the biggest obstacle. “Because you can buy it knowing you’re not harming the environment or animals,” she explains. “The leather industry is a multi-billion dollar global industry. We wanted to create more awareness and give an option to all those who are more conscious in their purchasing.”

I ask her where she sees Miomojo in five years. She immediately answers: “China,” almost before I finish. “Definitely the US too. We were supposed to be in the Vegan Fashion Week in LA, but Covid-19 happened.” She explains that putting the brand on the Chinese market would be huge, even with Miomojo’s niche, because of the sheer numbers. “As a business, we need to go to places where they have purchasing power, and China definitely does. Anything else is fine, but if you put your step into the Chinese market, you have big chances. Of course, it’s a very slow process and we still have to begin. But in five years, we’ll hopefully be there.”

Anay Mridul
Anay is journalism graduate from City, University of London, he was a barista for three years, and never shuts up about coffee. He's passionate about coffee, plant-based milk, cooking, eating, veganism, writing about all that, profiling people, and the Oxford Comma. Originally from India, he went vegan in 2020, after attempting (and failing) Veganuary. He believes being environmentally conscious is a basic responsibility, and veganism is the best thing you can do to battle climate change. He gets lost at Whole Foods sometimes.
Previous articleWorld Vegan Month: Being plant-based in Russia
Next articleWorld Vegan Month: Being plant-based in Tanzania