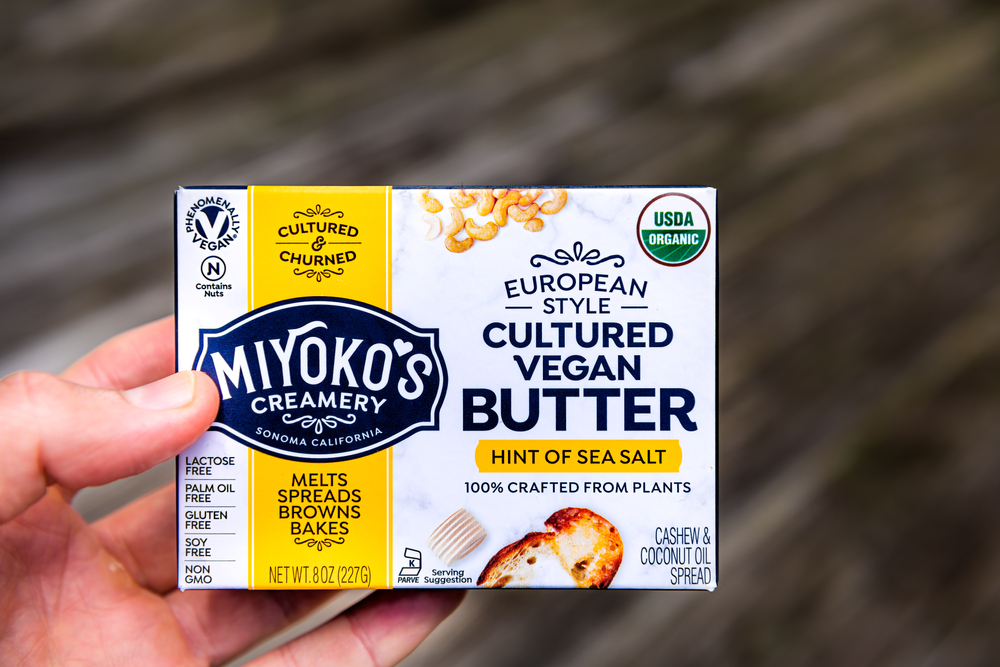 A judge has ruled in favour of Miyoko’s Creamery in its lawsuit against the State of California, setting a precedent for future plant-based food labelling.

California-based Miyoko’s Creamery has won a plant-based labelling battle after a judge ruled in favour of the company’s use of the words “vegan butter” on its alt-dairy products.

Miyoko’s had sued the California Department of Food and Agriculture last year after the state sent the brand a letter instructing it to stop using dairy-related terms like “butter”, “cheese” and “lactose-free” on its packaging.

The Miyoko Schinner-owned company, represented by Animal Legal Defense Fund, argued that the ban violated its First Amendment right to free speech, and the US District Court for Northern District of California concurred.

Judge Richard Seeborg ruled that Miyoko’s could continue using terms like “cultured vegan butter” for its products, which are cashew-based. It was granted a preliminary injunction in 2020 that allowed it to continue using its labels while the case proceeded.

Judge Seeborg argued that the state was essentially claiming butter labelling standards require “a sort of​ constitutional credit for old age: because the statute has been on the books for ninety-odd years, it must be especially reflective of what consumers understand ‘butter’ to mean.”

He added: “This logic, which finds no footing in the State’s cited authorities, defies common sense. Quite simply, language evolves. Absent anything from the State revealing why old federal food definitions are more faithful indicators of present-day linguistic norms, neither the fact nor the vintage of the federal definition of ‘butter’ counts against Miyoko’s at Central Hudson’s first step.”

In a statement, Miyoko Schinner said: “Using words such as ‘butter’ and ‘milk’ in the context of even products made from plants and not from animals is common parlance among consumers in the modern world. Food is ever-evolving, and so too should language to reflect how people actually use speech to describe the foods they eat. We are extremely pleased by this ruling and believe that it will help set a precedent for the future of food.”

Anay Mridul
Anay is journalism graduate from City, University of London, he was a barista for three years, and never shuts up about coffee. He's passionate about coffee, plant-based milk, cooking, eating, veganism, writing about all that, profiling people, and the Oxford Comma. Originally from India, he went vegan in 2020, after attempting (and failing) Veganuary. He believes being environmentally conscious is a basic responsibility, and veganism is the best thing you can do to battle climate change. He gets lost at Whole Foods sometimes.
Previous articleIs veganism just a ‘western concept’ for the privileged?
Next articleWhich packaging has the least impact on the environment?