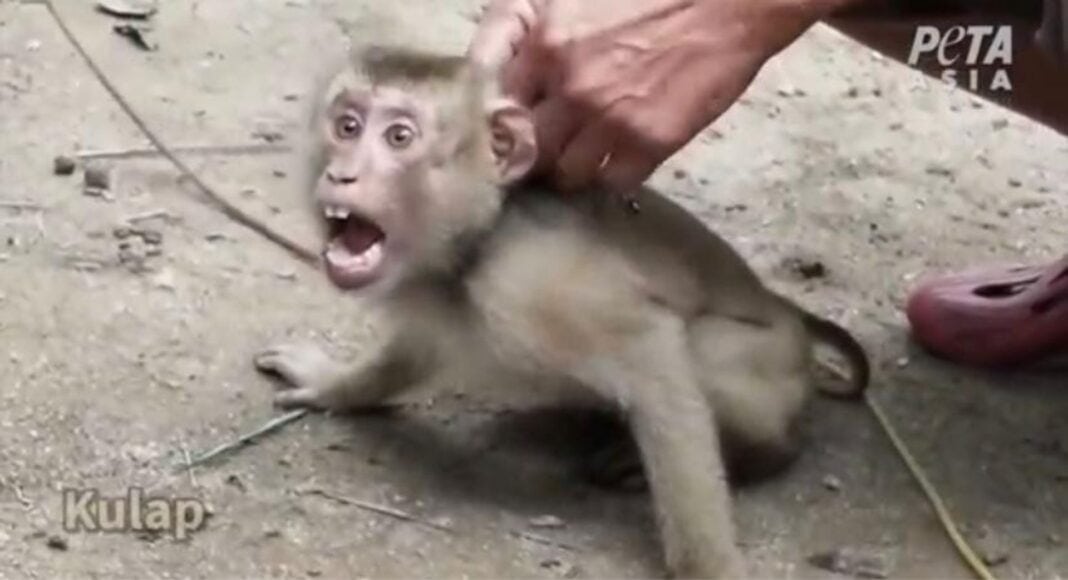 A PETA investigation has revealed shocking abuse on monkey slavery to harvest coconuts on Thai farms.

Supermarket shelves offer a large variety of milk alternatives, all of which are supposedly vegan-friendly and more ethically sourced than cow milk. However, this is not always true, as new footage from PETA has emerged showing coconuts being harvested using monkey slave labour to make coconut milk and other products.

An undercover investigation by PETA at eight coconut farms and several monkey training schools in Thailand revealed images of chained pigtail macaques forced to climb up trees to collect up to 1,000 coconuts a day.

According to PETA, many monkeys are illegally snatched from their homes and families in the wild at a very young age.  They are fitted with metal collars and are “abusively trained” to pick coconuts in order to make coconut oil, milk, flour, yoghurt and other products. Being kept in confined cages with no shelter from rain, they have little or no opportunity to socialize with others or to roam around freely. These conditions can eventually drive them “insane”. Many monkeys have been pictured showing signs of extreme stress, pacing and circling continuously on chains when not working.

In its report, PETA said: “An investigator saw monkeys being transported in cramped cages that were barely large enough for them to turn around in and others left in locked cages in the back of a pickup truck with no shelter from the driving rain. One monkey was seen frantically shaking the cage bars in a vain attempt to escape.”

The animal welfare organisation also claimed that “some trainers force them to participate in circus-style shows in which they entertain paying visitors by riding bicycles, shooting basketballs, and performing other confusing and demeaning tricks. If monkeys try to defend themselves, their canine teeth may be pulled”. 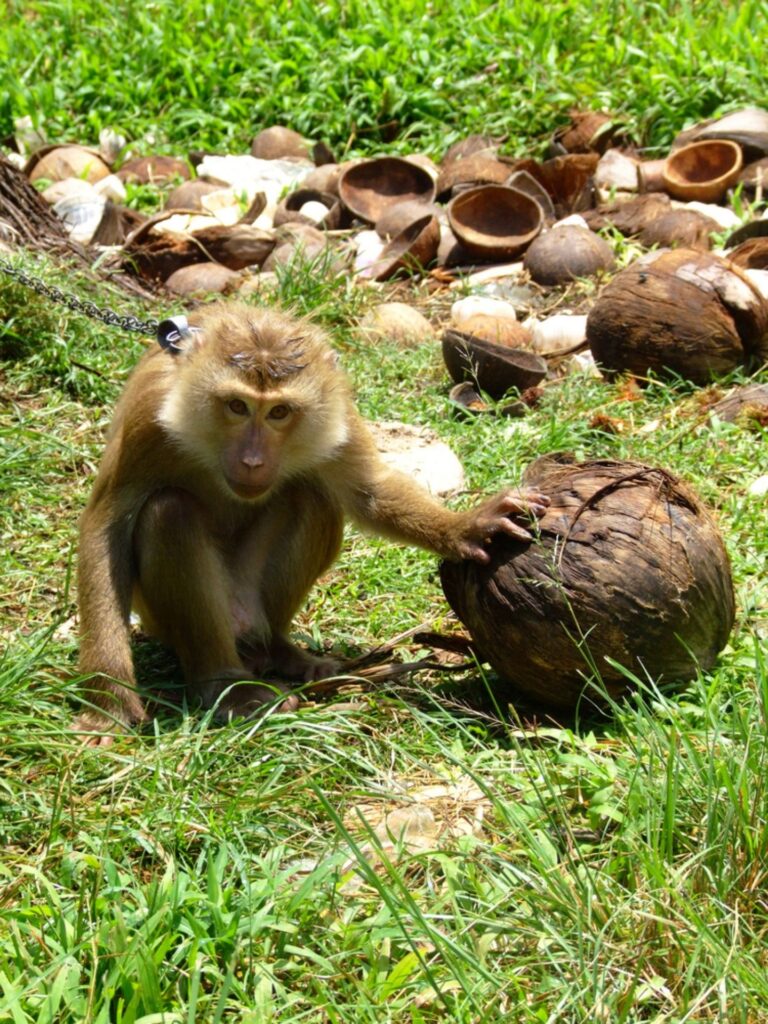 Speaking to The Vegan Review, animal rights activist and founder of PetsPeople, Mollie Kerr, said: “If this monkey was not chained to the ground, it would run free. They owe us nothing and this is something that we as dominant species forget, just because you can put a chain on an animal, don’t mean you should.

“However, monkeys picking coconuts isn’t a new practice altogether; with monkeys being trained to pick coconuts in Thailand for 400 years, steeped in tradition like many animal welfare issues, it’s a way of life for coconut farmers.”

Which coconut products use monkey labour?

PETA alleges that Thailand’s major coconut milk producers, Theppadungporn Coconut Co., the maker of Chaokoh coconut milk, and Thai Agri Foods Pcl, the producer of Aroy-D coconut milk, use monkey slaves to pick fruits on farms. Both brands are sold in several stores across the US and deny the allegations.

Supporters of the practice say it is too dangerous for humans to scale tall trees as this can cause injury or death and that using monkeys to harvest products is an old tradition in Thai culture.

PETA advises buyers to purchase products from other coconut-growing regions such as Brazil, Colombia or Hawaii instead. These countries allegedly use humane methods like planting dwarf trees, human climbers, ropes, ladders or other machinery.

What products are safe to use?

Although monkey labour is a widespread method to harvest coconuts in Thailand, there are also a small number of monkey-free plantations. Macaques are often used to pick coconuts that are harvested for milk as they grow on tall trees that are 15 metres or higher.

However, coconut water usually comes from smaller dwarf trees, which means they can be easily reached by humans using long bamboo sticks and therefore don’t require monkeys. Coconut water from brands like Harmless Harvest who use coconuts that are grown in Thailand can be enjoyed guilt-free, according to PETA. 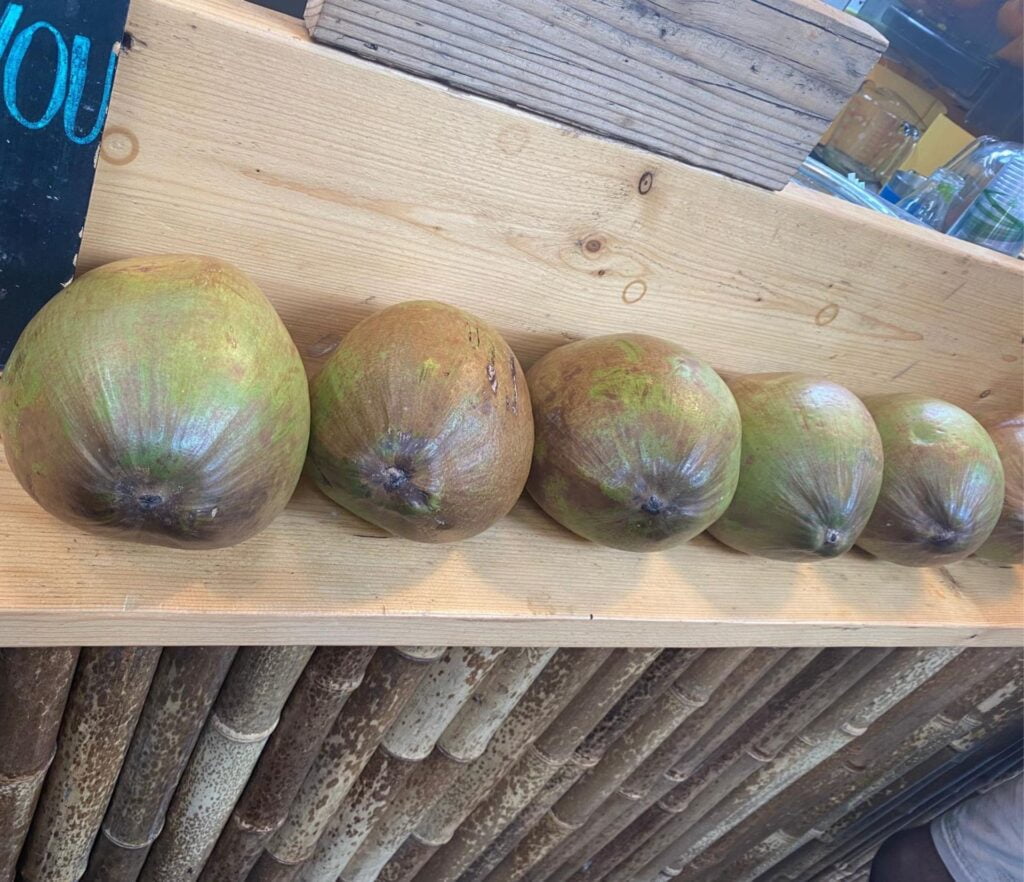 With around 1.3 million tons of coconuts each year, Thailand is one of the world’s leading coconut producers exporting several products such as fresh coconuts, oil or milk to countries all over the world. According to Bloomberg, the monkey slave scandal has hit the $400 million industry in Thailandm forcing it to make products more traceable for consumers.

Following PETA’s investigation, which was first reported by the Telegraph and backed by Carrie Symonds, fiancée to UK prime minister Boris Johnson, many supermarkets in the UK have now axed some coconut products from Thai brands. On Twitter, she urged stores to cut ties with products made with monkey labour.

Glad Waitrose, Co-op, Boots & Ocado have vowed not to sell products that use monkey labour, while Morrisons has already removed these from its stores.

Time for ALL supermarkets to do the same.

Responding to the allegations, Asda, Tesco and Sainsbury said they will remove products from sale that are known to have used monkey labour during its production. According to PETA, 25,000 stores will stop knowingly selling Aroy-D and Chaokoh coconut milk products.

Facing the growing pressure of possible boycotts in several other European countries, the US and Australia, some Thai coconut companies have agreed to create measures to trace coconuts back to their source so that consumers can see whether or not monkey labour was used to collect the fruits.

Since animal welfare is at the heart of veganism, coconuts picked by monkey slaves are certainly not cruelty-free, and thus vegan. In order to help, Kerr said people can “diversify their plant-based milk purchases” more by “opting for oat or hazelnut, which are grown where they don’t need much watering and pickers are not exploited.” They can also help support charities in the vicinity with donations to stop abuse, and raise awareness on social media to expose the reality of animal abuse.

Rebecca Horn
Rebecca is an aspiring journalist who creates research-driven content for the Vegan Review and the Brunel Times. Originally from Germany, she currently studies journalism at Brunel University in London and has worked at the events arm of the Financial Times. Knowing that knowledge is power, Rebecca is undertaking a one-year NCTJ Diploma alongside her degree and actively contributes to the University newspaper. As a strong believer in the power of asking questions, she believes that everyone has a story to tell
Previous articleUK government urged to ban free dairy milk in schools
Next articleDao Foods portfolio company Starfield closes $10 million in Series A funding