My Emissions: Labelling food to lower your carbon footprint

My Emissions, a labelling programme providing carbon footprints for recipe blogs, is on a mission to make carbon labels for all food a national legal requirement.

“The time is right for carbon labels,” says co-founder of My Emissions Matthew Isaacs. “People don’t really know about food emissions at the moment, and they won’t be able to unless this information is labelled on food products.” While carbon footprint information is widely available, Isaacs and his co-founder Nathan Bottomley are concerned that the 25% of emissions that come from food are still unrecognised.

After graduating from Cambridge together, the pandemic left the former students furloughed and stuck at home. With a desire to reduce their carbon footprints, they delved into food emissions — struggling to find one source that showed all the data.

So Isaacs and Bottomley created a calculator that brought all this together into one source on their own website. The calculator was a step forward, but didn’t keep them occupied for long.

The two entrepreneurs started studying product life cycles. After going through countless assessments, and calculating their final values, they generated a database and platform revealing the individual emissions of entire recipes.

Though Isaacs and Bottomley started My Emissions in 2020, the concept of carbon product labels has its roots in 2007, when Tesco announced it would be printing labels on all 70,000 of its products. In 2012, however, this was abandoned, after the supermarket chain claimed it was too complicated. Fast forward to January this year. Quorn, one of the biggest brands in the plant-based world, announced it would be introducing carbon labelling — certified by Carbon Trust.

Read our exclusive interview with Quorn.

My Emissions is going a little further. This Veganuary, the entrepreneurs created a guide to 31 vegan recipes, one for each day of the month, with some of the lowest possible emitting dishes. Their carbon labels are thorough, each revealing the values as a percentage of the fairy daily food emissions (approximately 3,050g CO2e a day).

But won’t all these numbers confuse, or scare, people? “I’d much rather test and scare some people off, than not put anything up,” says Isaacs, smiling. While some might find the labels overwhelming, My Emissions believes the average person might not even look at the values themselves. Having numbers alone is enough for people to realise the impact their food choices have on the environment. “In some ways, that’s the biggest step we can make.”

The majority of emissions come from the start of a food product’s life cycle. With meat, for example, this will be from the methane that an animal gives off. “It’s not about how local you buy your food — although I’m not against that — it doesn’t matter if you eat local beef,” adds Isaacs. 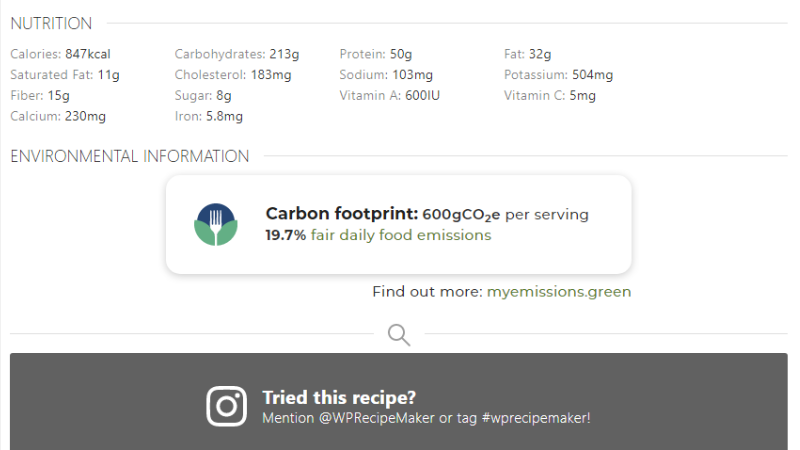 But these stages are unseen by consumers, and it’s hard to communicate what packaging is used, or how food is farmed to the average person. Until people know data like this exists, Isaacs says they won’t be aware of their individual potential.

While My Emissions published a Veganuary guide, it says people don’t have to go fully plant-based to reduce their carbon footprints. Beef from Brazil, for example, will be much higher than lamb grown on non-arable land in Wales. But even the “best” meat is worse than the average vegan or vegetarian substitute. According to Isaacs, even imported fruit and vegetables will have a relatively low footprint. Soups and stir-fries with seasonal, locally grown vegetables are optimal for those trying to lower their carbon footprints.

To go one step further, Isaacs says people can be more aware of their cooking habits and their food waste. My Emissions doesn’t factor waste into its values, but looking for recipes that can use up everything — as well as composting — are both methods Isaacs recommends. Keeping the lid on a pan, preheating an oven for the correct amount of time, and using the right amount of water in your kettle will also contribute to lowering your cooking emissions.

Isaacs is looking to get My Emissions in meal and restaurant deliveries, products, and menus. Once it has established a place in the UK market, it will be expanding to include global datasets, and to be used in international companies. Though the entrepreneurs are still at a startup stage, they are confident that carbon labelling is going to be a necessity very soon. “In five years, it’ll be a legal requirement that carbon labels are placed on food,” says Isaacs. “Just like nutritional information.”

Read Olivia’s recipe for vegan cashew paella, featured in the My Emissions blog.

Olivia Rafferty
Olivia is the Assistant Editor of The Vegan Review. An aspiring Middle Eastern correspondent currently studying journalism at City, University of London, she is passionate about the planet, she believes veganism is the first step to solving the complexities of climate change.
Previous articleExclusive: Meet the women urging Kamala Harris to go vegan
Next articleGjenge Makers: Recycling Kenya’s plastic waste into construction bricks