My experiences facing the extremes of vegan activism 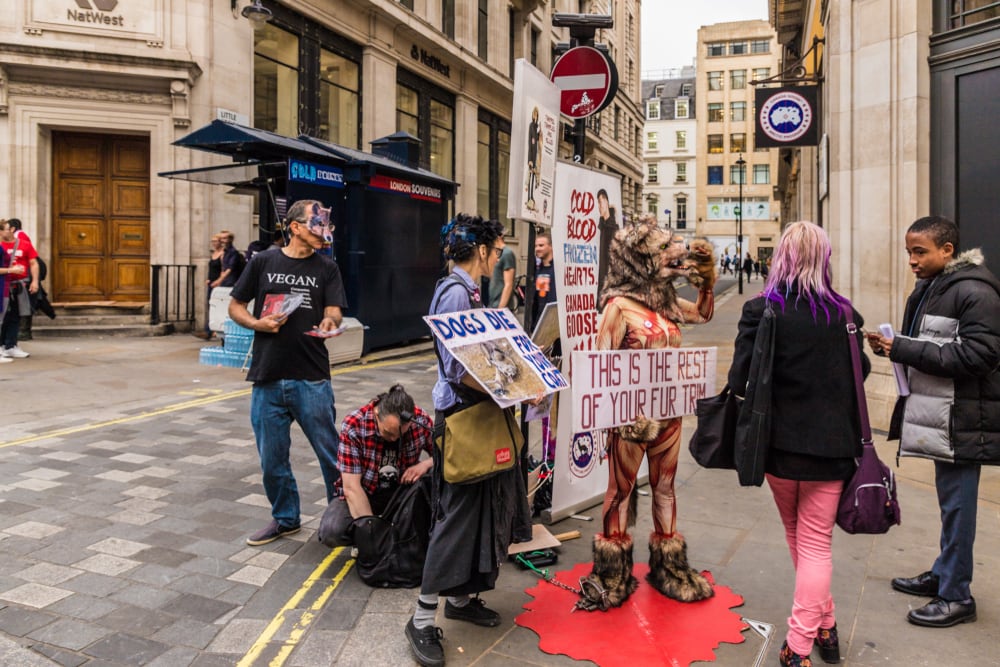 Vegan activism encompasses a diverse spectrum of approaches. But some confrontational, extreme and destructive ones can cause more problems than they aim to solve.

In a TED talk at Venice beach in 2018, vegan musician Moby said: “Being an animal activist can be really hard — every year, over 100 billion animals are killed by and for humans.”

I first remember hearing a figure like that in a talk given by Dr Mike Hooper, when I volunteered at The Vegan Pledge in 2013, which was a friendly campaign where people pledged to go vegan for a month, attending two events, one at the start and one at the end of the pledge. They could receive support from a vegan buddy, lots of information, and vegan food and drink for lunch; many people stayed vegan beyond the end of the month.

A couple of years ago, I took part in a Christmas carolling outreach event, where we sang slightly altered Christmas carols — for example: “We wish you a vegan Christmas” — while handing out vegan and animal rights leaflets.

I remember sometimes being ignored, but no one got confrontational with me. In fact, one woman stopped and asked: “You are vegan?”

Moby goes on to say in his TED talk: “On the other hand, being an animal activist is easy, because all I have to do is remind people of what they already know, and remind people of what they already feel, because I assume everyone here, apart from the sociopaths, has had that experience of, like, bonding with a cat, or bonding with a dog and feeling that heart-expanding love.”

Of course, people feel angry, disturbed and horrified. I once saw a t-shirt that read: “If you wear fur, I hope you die screaming too.” While it is understandable where a statement like this comes from, a sentence like this is problematic. People want to get a passionate message across, but wishing people a painful death is very aggressive, to say the least.

It’s not necessarily inviting a fur-wearing person to have a conversation with you and question their choice of a fashion statement — I am not happy when I notice someone wearing fur, but I don’t say anything. I’ve never felt inclined to confront them, as this usually happens in passing or when I’ve been on a crowded bus, etc.

Famously in the past, protesters have thrown red paint at people wearing fur, but given that there is a lot of fake fur around now, this could go horribly wrong, and perhaps an innocent vegan could become the victim of an anti-fur protest.

Dr Tyler Paytas, a research fellow in moral philosophy at the Australian Catholic University’s Institute for Religion and Critical Inquiry, told ACU Impact: “Given how pervasive meat-eating is in the culture, and given the strong anti-vegan sentiment that I’ve found both in the United States and here in Australia, I think it’s very easy for people to dismiss vegans as crazy, self-righteous social justice warriors that don’t need to be taken seriously.”

He added: “I think we should be very careful about doing things like occupying restaurants and vandalising butcher shops, things that will make the anti-vegan sentiment even stronger… When vegan activists use extreme methods like vandalising, intimidating and harassing, it only exacerbates the problem.”

There are a number of schools of thought when it comes to activism; vegans have, to some extent, acquired a bad reputation due to the actions of some militant and preachy-type vegans, but you don’t always even need to be an activist or preach to feel the wrath of defensive or aggressive non-vegans.

One afternoon last year, I was handing out leaflets, trying to promote a vegan market, when I was confronted by a guy. At first, he asked me about veganism, but then he got a little more confrontational: “What’s wrong with eating meat?” It was alarming, the edge in his tone. I calmly said something about loving animals, but he just got more ranty and defensive.

This is just one example of the mere mention of veganism turning people into interrogators: that man felt threatened, but I’d said nothing about my opinion of meat-eaters.

Picking apart his words is perhaps revealing. On a subconscious level, by asking: “What’s wrong?” he could have been admitting, or somehow recognising, there is something wrong with eating meat. But he didn’t question himself, he questioned me.

I wasn’t even doing outreach or activism in that instance, I was just promoting something. Outreach and activism, in their various forms, can trigger different reactions; it’s not as simple as vegans vs non-vegans, there can be battles within the vegan movement too. Though vegans may share a collective passion for animals, they do not share one vision of how to convey, promote, inform and educate others about the cause.

Down one end of the spectrum, there are outreach and social events — evening drinks, potlucks, walks, creative workshops, book clubs and more — as well as visits to vegan markets and festivals. There’s a general sense of accessibility to these forms of outreach, and informal events are largely conversational, informative and friendly.

Outreach and activism events that take things up a step may be an organised group of activists choosing to protest outside somewhere, like at a restaurant or a shop selling something against their beliefs, like fois gras or Canada Goose jackets. They’ll gather in a small or large group, wave placards full of information and graphic images of force-feeding a duck or skinning a coyote, shouting their message, maybe using loudspeakers.

Other forms of this kind of activism are things like the Cube of Truth, but without the shouting. It’s a group that stands in silence wearing Guy Fawkes masks, made famous by Anonymous for the Voiceless, in a cube-like formation, each holding a laptop screening horrific footage of animal suffering. These cubes can be effective — there may be an unmasked group nearby to engage in conversation with anyone who cares to stop and ask questions.

Having a calm, civil conversation or discussion with someone is an effective approach. When people taste good food at an event or they have a nice conversation with someone who comes across as friendly, that’s a constructive way of encouraging people to go vegan. At least over shouting at people that they are evil and should die because they’re wearing part of a dead animal.

It could be argued that screaming and doing more violent, extreme or destructive vegan activism is nothing compared to the suffering of the animals, but it can also be argued, as Mahatma Gandhi said: “An eye for an eye will leave the whole world blind.”

Jessica Fox
Jessica has been vegan for nearly 20 years; over the past 8 years, she has been actively involved in the London vegan community, organising and hosting a variety of vegan events.She also regularly hosts walks, potlucks, and art/creative writing workshops. Jessica is an artist, writer, and genealogist; she loves photography, swimming, and walking in the countryside and seaside.
Previous articleAllergies and veganism: balancing plant-based diets with nut allergies
Next articleWorld Vegan Month: 30 days, 30 stories, across the globe