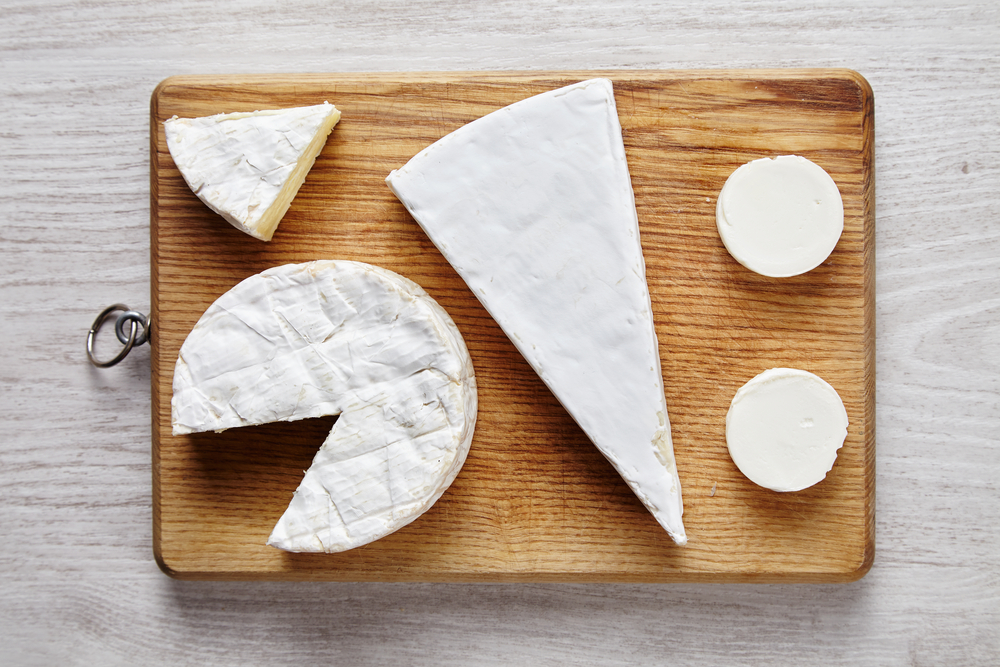 Vegan discovery platform My Vegan Kitchen reveals the best artisan vegan cheeses in the UK, as voted by its users.

At My Vegan Kitchen, we love to discover and share new foods, especially from artisanal brands that are making something as experimental and creative as plant-based cheese.

Cheese is central to many of our favourite meals and is often the one thing that new vegans struggle to replace. A recent study found that cheese is number one on the list of the top 40 foods that Brits would miss if they went plant-based. Thankfully, the vegan food market is rapidly growing, as are the number of artisan vegan cheesemakers in the UK.

My Vegan Kitchen ranks foods by the number of votes they receive and our members have been voting on a variety of artisanal cheese alternatives.

We spoke to some of the most highly rated vegan cheese brands by My Vegan Kitchen members. They told us about the inspiration behind their craft, their personal favourites, and upcoming launches.

Here are the top nine, ranked in ascending order. 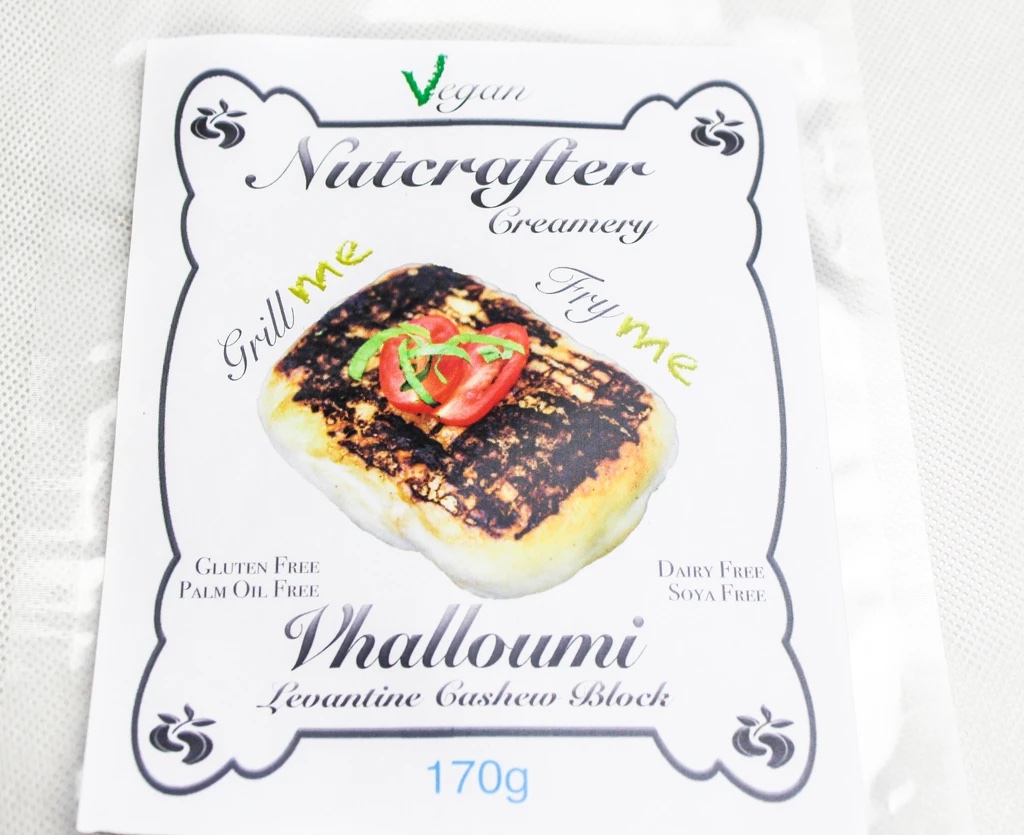 Based in Scotland, The Nutcrafter Creamery was founded by Francesco Accolla and Aimee Jackson, who describe themselves as being passionate about food, the environment and sustainability.

The Nutcrafter Creamery’s Vhalloumi — Levantine Block is a white vegan cheese alternative with a fibrous texture. Made with cashew nuts, it has a high content of calcium, protein and fatty acids. Like dairy-based halloumi, the Vhalloumi can be grilled or fried. 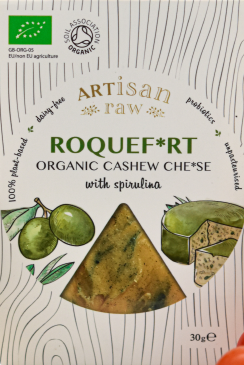 London-based company Artisan Raw was founded in 2018 and produces a range of raw vegan cheeses, each containing a different superfood. In 2019, it was awarded a 2-star Great Taste Award for its Che*dar with Tumeric.

This Roquefort-style vegan cheese is made with antioxidant-rich spirulina and is described as being “mild and tangy in flavour”. As a raw cheese, it has not been chemically processed, refined or heated above 48°C. 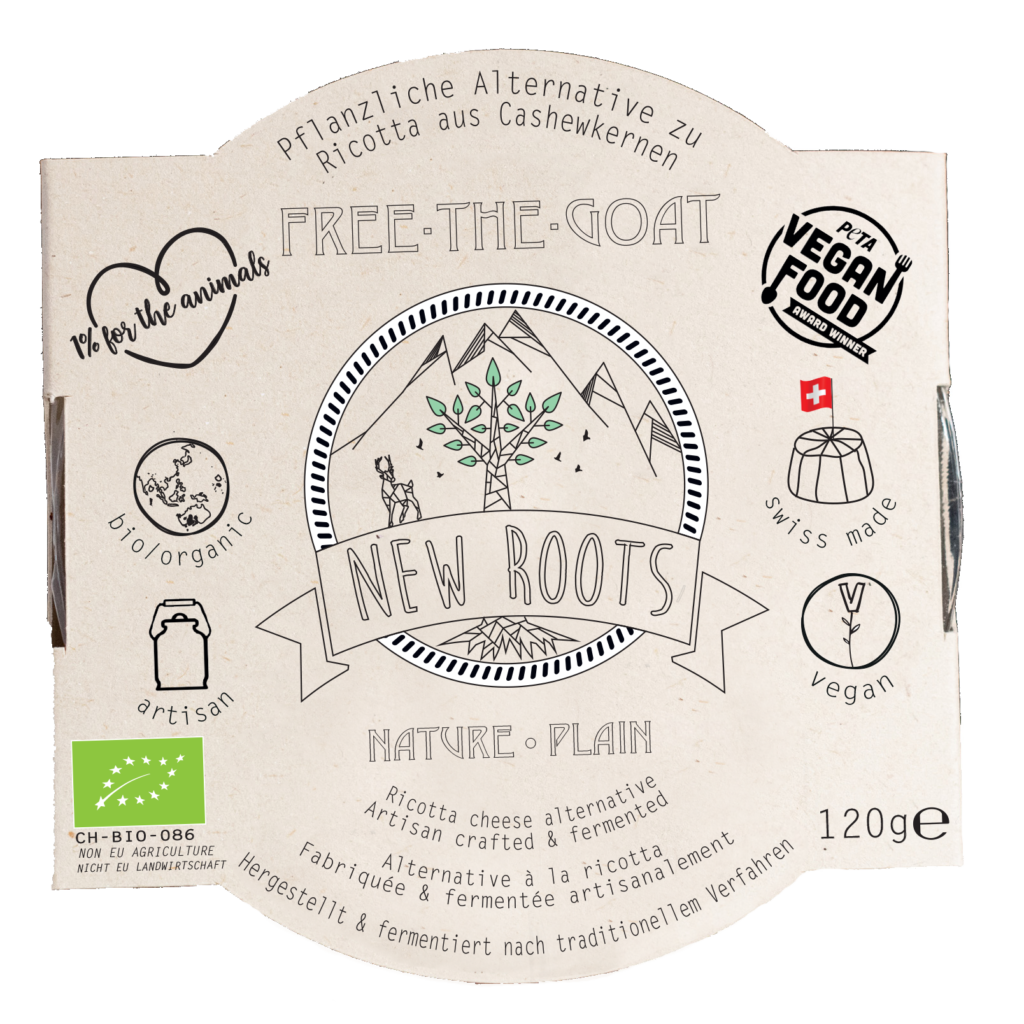 Swiss company New Roots was founded by Freddy Hunziker and Alice Fauconnet, who had become “vegan for ethical reasons and kept hearing people say they’d go vegan if it wasn’t for cheese”. As a result, they “decided that producing high-quality and organic cheese could help move the world towards a kinder and fairer future”.

Free the Goat Ch**ze, a plant-based alternative to ricotta, is handmade in a traditional way by curdling cashew milk and flavouring with thyme and lavender. New Roots’ award-winning cheeses come in eco-friendly packaging.

Fauconnet also recommends the Soft White: “I’m French and grew up loving camembert. I love that this vegan alternative is just as rich, creamy, and tasty.”

Nerominded Black Truffle by I AM NUT OK 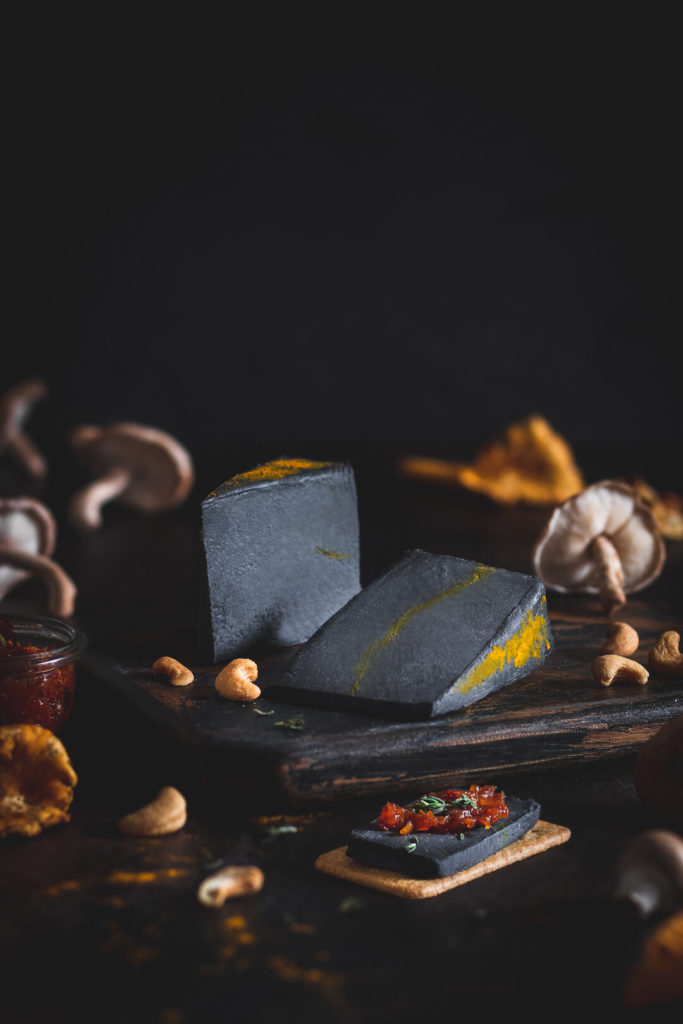 Founded in London by Angela and Nivi, I AM NUT OK uses a mix of traditional and new techniques. Its cheeses are all made by hand in small batches and undergo a fermentation and ageing process.

The Nerominded Black Truffle is made with activated cashew nuts and truffle oil. This black cheese also has a golden turmeric vein and a splash of turmeric on top. It is flavoured with organic miso, sea salt and garlic and contains live cultures. 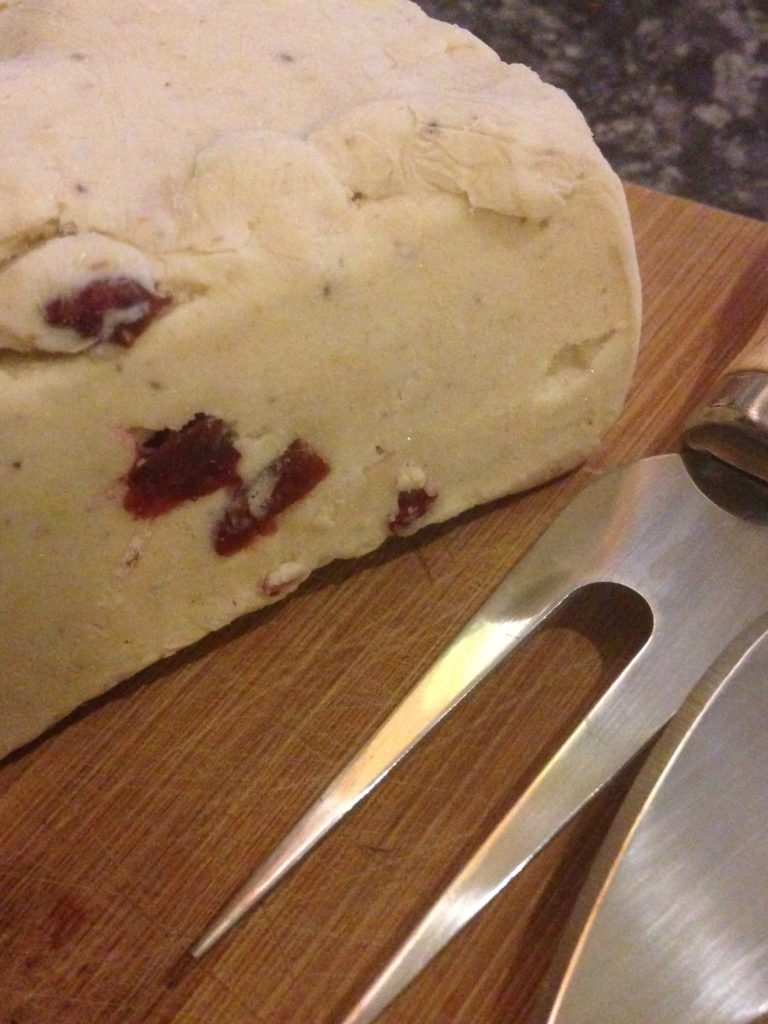 Pips artisan nut cheeses are handmade, hand-cut and hand-wrapped. Founder Catherine Bryan wanted to avoid palm oils and often found commercial cheese to be “at best, bland and at worst, claggy and weirdly smelly”.  So she decided to “produce butter and cheese that satisfied my cravings for the true umami flavours I missed”.

Pips Creamy Cranberry Cascheese is made with raw cashew nuts, coconut oil and cranberries. This cheese is described as being creamy and smooth with a tang of acidity.

Bryan recommends you look out for Yarg, her favourite vegan cheese. “I’ve been experimenting with (it) over the last year, a nutty, rich cheese wrapped in nettles and a signature cheese from where I have roots, Cornwall.” 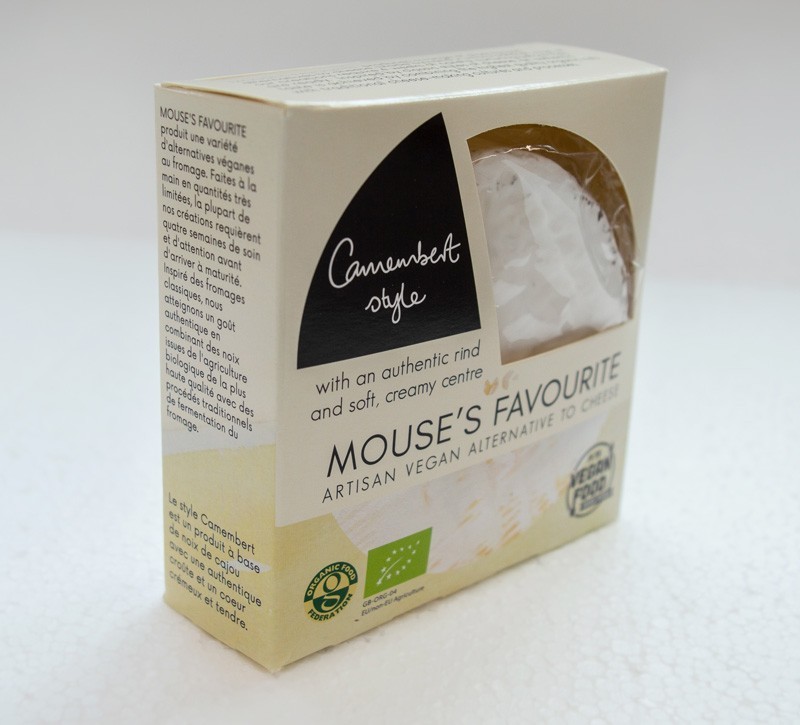 Mouse’s Favourite has been making vegan versions of traditional cheeses since 2016, aiming to “make the best vegan cheese possible”. It tries to keep the flavours and visual beauty as close as possible to the original cheese, while keeping the processing minimal. One of its current favourites is Apricolina, “a medium-firm cheese with organic apricots”.

Its Camembert cheese is an award-winning cashew-based alternative made with only four ingredients and has a creamy centre with the distinctive rind associated with a Camembert.

Mouse’s Favourite has revealed that it is “currently launching our True Blue. A wonderful blue cheese that has been aged for 6 weeks”. 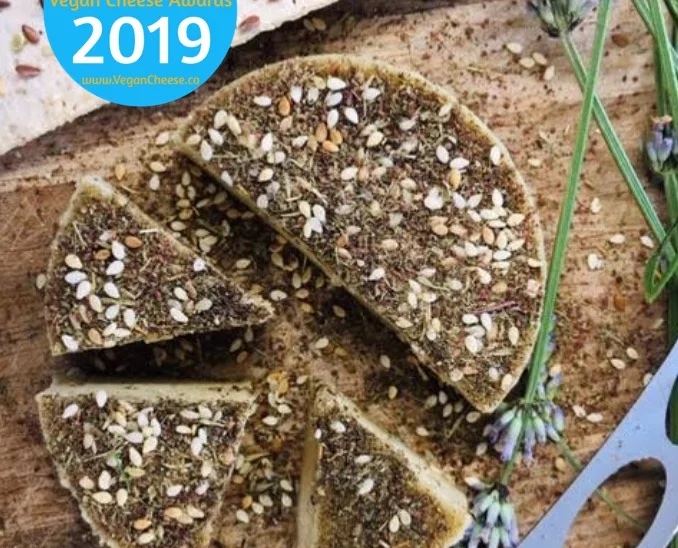 Tyne Chease is a small family business based in the North of England. It produces authentically cultured and matured handmade cheese. Director Ami Deane felt that back in 2014, she struggled to “find a good artisan vegan cheeseboard-style cheese” and so “started us on a quest to create unique vegan cheeses that really stand out in any cheeseboard”.

The award-winning Za’atar Spice Chease, which has a cashew base, is flavoured with the Middle Eastern spice, za’atar, which is a blend of herbs and sesame seeds.

Look out for more from Tyne Chease, which promises it is “currently in the process of trialling our new flavours” and believes they will be some of its best yet. 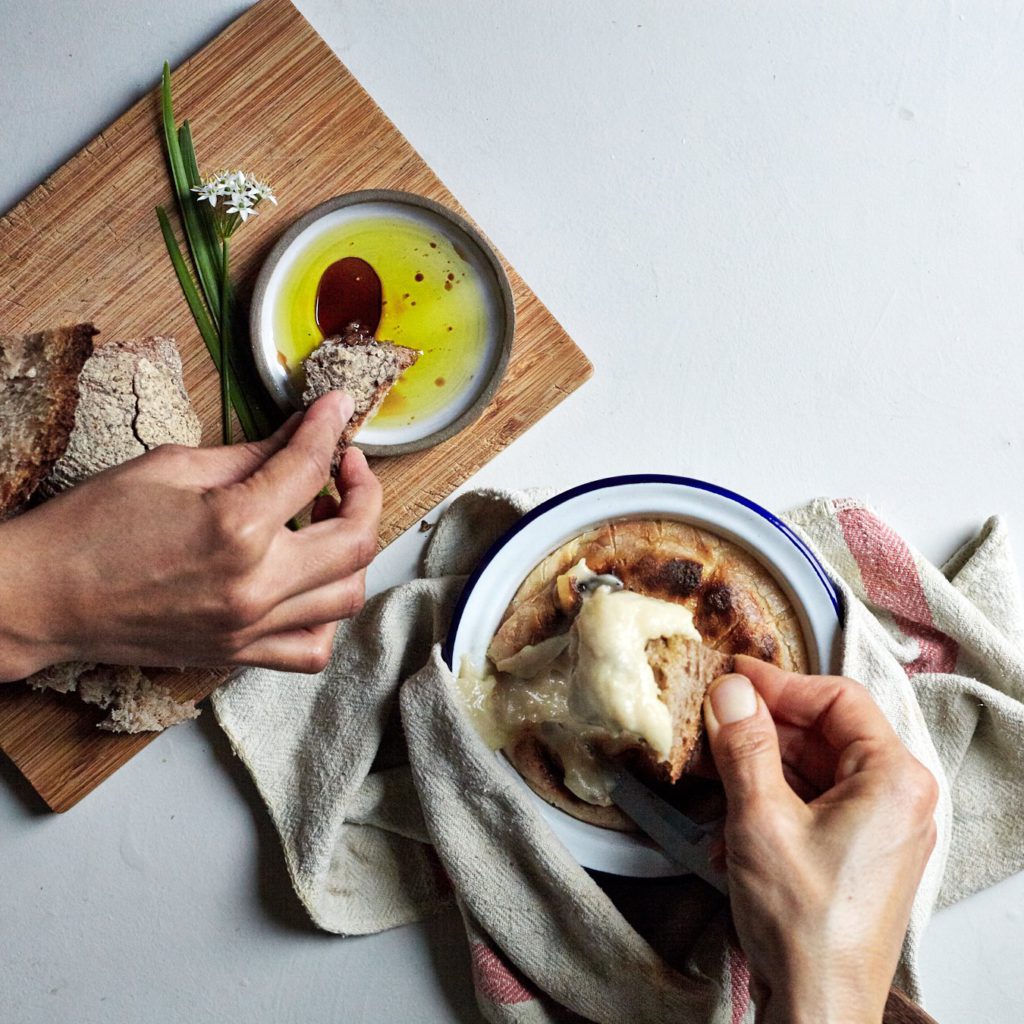 The’artyvegan, a vegan business based in London, is owned by Maurelio and Ellora Torchia, a father and daughter team who have been vegan for over 30 years. Maurelio learnt the art of tofumaking in Japan and later taught farmers in India how to substitute paneer with tofu.

“The idea of scheese was born after Ellora (being vegan all her life) wanted a product that resembled the real thing. No nut flavour, no coconut residue, just something delicious that melted as cheese did.”

This Truffle & Garlic Young ’Cam is the duo’s most popular and favourite cheese, voted second best by My Vegan Kitchen members. Ellora believes “it’s just absolute heaven when poked with fresh garlic and Rosemary, laced with white wine, baked for 30 minutes and then grilled for seven. Finally served, dipped into with hot, crusty bread.” 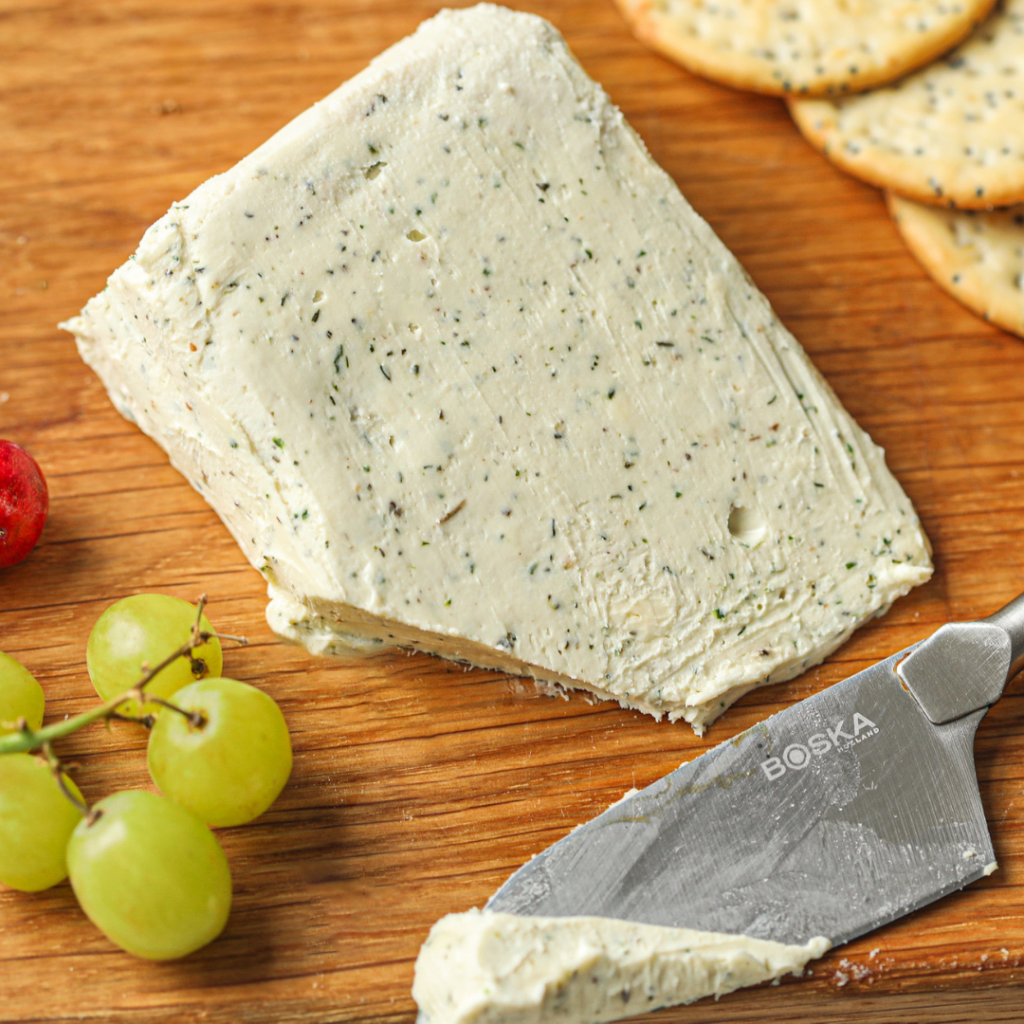 Honestly Tasty started in 2018 as a vegan startup in Haringey. As mentioned on its website, it was “founded by Mike when his veganism came up against his love for cheese”. Cheese alternatives by Honestly Tasty include Insteaddah Cheddah, Shamambert and Veganzola.

Topping the artisan vegan cheese list on the My Vegan Kitchen website is Herbivoursin, a vegan alternative to Boursin. This vegan cheese has a creamy texture with garlic, chives and fresh parsley.

As the artisan vegan cheese market continues to grow, which cheese alternatives will make it onto your cheeseboard?

Read our story on how vegan cheese producers are replicating dairy.

Bob and Sarita Sheth
Bob and Sarita Sheth are the founders of My Vegan Kitchen. My Vegan Kitchen is both a discovery website and a platform to showcase the wide variety of new, innovative, artisan food brands and inspirational recipes. It is unique in allowing its users to vote on their favourite foods and recipes and thereby "ranking" them by popularity.
Previous articleA fully vegan world: hope, fantasy or possibility?
Next articleExclusive: 56% of American vegans wouldn’t date meat-eaters