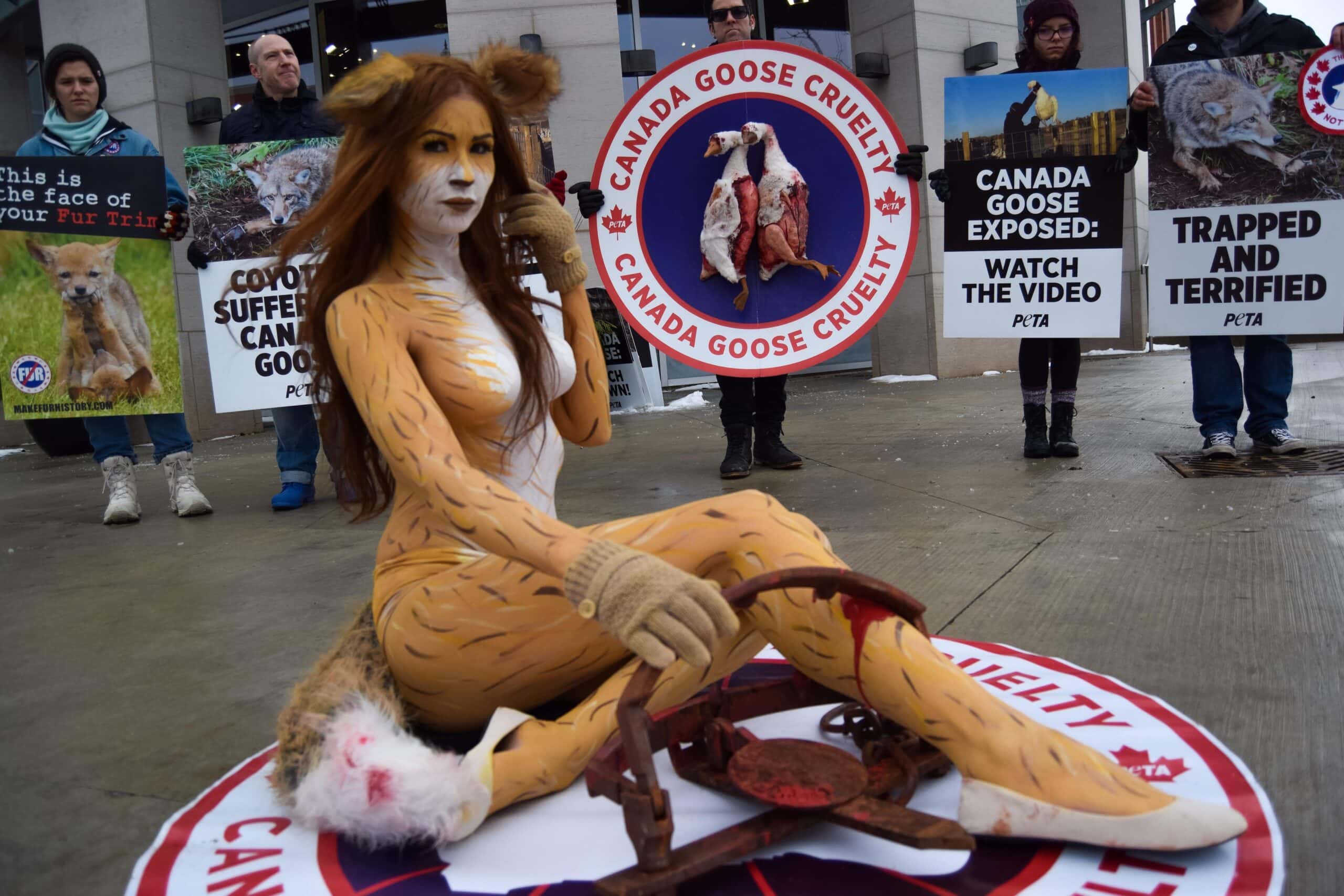 Would you go naked for PETA? It is minus 20 degrees Celsius, a woman wearing nothing except underwear, body paint brown fluffy ears, and tail is sitting on a Canada Goose logo. Her legs are stuck in a coyote trap covered in red paint resembling blood. PETA protesters are standing behind her holding banners, campaigning against the famous brand that uses fur.

‘’It was so cold. But of course, it’s nothing compared to what the animals have to endure,’’ says Vikki Lenola, 32-year-old animal-rights activist from Canada, remembering her first PETA demonstration in Toronto.

‘’I just kept that in mind and put on my big girl panties, which is the only thing I had on.’’

She’s not only a face behind PETA’s activism, she’s also a model, Go-go dancer and someone who loves fashion.

‘’I was in college and I saw this advertisement from PETA, I remember seeing millions of pigs being buried alive,’’ said Vikki. 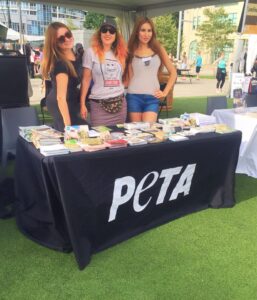 ‘’My heart just stopped and I just knew it was wrong and I just wanted to give them a voice.’’

After that, she attended an anti-fur demonstration, where she met other activists and started getting involved with PETA. Little did she know that it would lead to her going naked for PETA, eventually.

Her first collaboration with PETA was a protest against Canada Goose where she was dressed like a coyote showing what is being done to these animals trapped for fur.

‘’It’s really attention-grabbing and I found that worked well, and I ended up doing another demonstration like that myself.’’

Now she’s an organiser for PETA and she also handles Media Relations.

‘’It’s an honour to work with an organisation that has done so much for animals. I’m just so thankful that they even exist,” said Vikki.

She has also lobbied against animal testing, hosted a booth at Vegfest and demonstrated against the commercial seal hunt.

No excuses to not be vegan

Vikki has been vegan for almost four years. She turned vegan over the course of a couple of years back when she started getting involved with PETA.

‘’Fish was the last thing that I did give up. It was not hard at all for me to give up dairy, it never even seemed like food to me.

‘’There’s so many alternatives now. There’s really little excuses now to not be vegan.’’

‘’I think it’s important to raise awareness because I don’t think people would be contributing to this violence and cruelty if they truly saw what was going on.’’

Vikki also thinks that is important to show retailers that animal rights is something that the public cares about.

She says that PETA exists to raise awareness and bring attention to different issues, but the public also needs to act.

‘’The reason laws are changing is because the public doesn’t want us to hurt animals,’’ Vikki said.

I bow to Canadian activists with a heart, protesting #CanadaGoose cruelty! pic.twitter.com/DjZQNeRaN3

Her passion for combining everything cruelty free and her interest in fashion doesn’t end with her dressing up as a ‘’sexy’’ beyond meat burger for Halloween. She was inspired to organise a vegan non-profit fashion show called Vegan Fashion Canada taking place next year in Toronto.

‘’I noticed by doing a lot of these demonstrations, a lot of time we are having conversations with people and I very flabbergasted to find that a lot of people don’t know that there alternatives to fur or leather,’’ says Vikki.

‘’So that’s why I wanted to start my fashion show.

‘’You can have stylish clothing, just as prestigious, same prices, everything same only it doesn’t hurt any animal. So why wouldn’t you choose that?’’

stice.ca/Her show will donate all of its proceeds to Animal Justice, which is an organisation leading the legal fight for animals in Canada.

Because of the current pandemic, there’s a setback with the venue. However, Vikki still managed to secure vegan designers like Honest Whisper and Doshi.

Vikki is also checking with the brands about the steps they are taking towards sustainability and ethical treatment of their staff.

‘’The second part to the vegan fashion show is that we will also have a sustainable vegan textile display, as a Gallery of Art,’’ she says.

‘’This [modelling and Go-Go Dancing] really helps me go through school because those are flexible jobs that I can sort of pick and choose when and what I want to do.”

She graduated recently with a degree in Environment Resources and Sustainability from the University of Waterloo in Canada.

‘’If I could, I would just save animals for a living. But I think it’s very beneficial to use my voice on the platforms I’m able to gain from my job as a model. 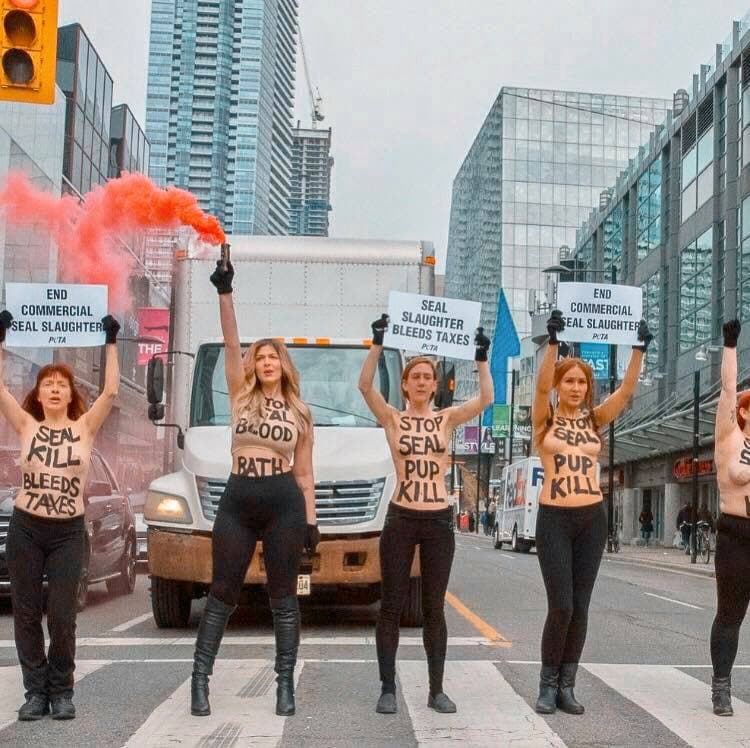 ‘’That gives me a platform of half a million people I can talk to.’’

I ask Vikki whether people have ever taken her less seriously because of her other jobs when trying to prove a point as an activist.

While she has only positive experiences in real life, her experience with Facebook is very different. There, going naked for PETA has led to some strange interactions.

Vikki says: ‘’Facebook is an older demographic and it’s mostly men. The way a different demographic reacts to information is much different.

‘’I’ve had a lot of times people saying you don’t know what you’re talking about, you’re just a model, not realising I have a degree.

‘’It’s a social skill to try to balance everything. And I try to remember what I was like before I was aware of these issues.’’

Vikki’s compassion and caring nature mixed with her outgoing personality give her the dynamic controversial spark. Which makes her the perfect fit for activism. She is not afraid to get naked for PETA. And go the extra mile to show us how much she cares about animal rights.