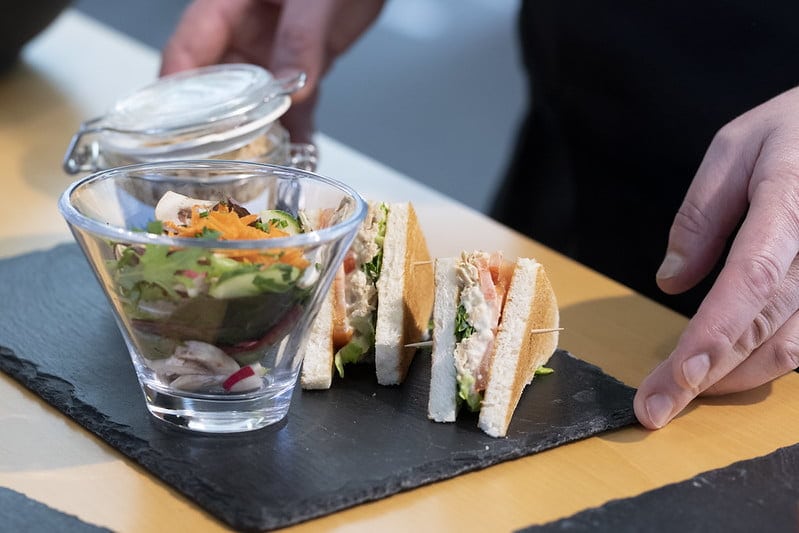 Nestlé is making a play into the plant-based seafood market with the launch of a vegan tuna alternative.

Nestlé is entering the plant-based seafood space with its launch of vegan tuna, made from six ingredients.

The company says the plant-based tuna alternative is rich in pea protein, contains all essential amino acids, and is free from artificial colours and preservatives.

“Sustainably produced plant-based seafood alternatives can help to reduce overfishing and to protect the biodiversity of our oceans,” said Nestlé’s chief technology officer Stefan Palzer. “Our plant-based tuna alternative is delicious, nutritious and high in protein, while also being mercury-free. We are excited to launch this great product, and other plant-based fish and shellfish alternatives are already under development.”

The company, which offers plant-based meat alternatives like mince, sausages, meatballs, cold cuts and chicken, developed the vegan tuna in nine months in its research centres in Switzerland, Germany and the US. The product will be launched under the brand’s Garden Gourmet line in Switzerland. The release will feature both the chilled tuna (which will be in a glass jar) as well as plant-based tuna sandwiches in select stores.

Nestlé Switzerland’s market head Eugenio Simioni added: “We are delighted to launch this strategic expansion of Nestlé’s plant-based offerings in the Swiss market first. It is another example of the innovation strength of Nestlé in Switzerland, and the exceptional capabilities and expertise we have in this country in the area of food and nutrition.”

The Swiss food giant has seen a 40% growth in its vegetarian and vegan products. It has been expanding its array of vegan products recently, with its vegan Carnation condensed milk, pea protein-based YES! bars, and a range of dairy alternatives in development.

Anay Mridul
Anay is journalism graduate from City, University of London, he was a barista for three years, and never shuts up about coffee. He's passionate about coffee, plant-based milk, cooking, eating, veganism, writing about all that, profiling people, and the Oxford Comma. Originally from India, he went vegan in 2020, after attempting (and failing) Veganuary. He believes being environmentally conscious is a basic responsibility, and veganism is the best thing you can do to battle climate change. He gets lost at Whole Foods sometimes.
Previous articleSugaring, the vegan waxing method making a comeback
Next articleNon-GMO, Organic, Fairtrade: What do food labels really mean?